Guide to playing 'Mute' in 'Bank'

■ Bank - Mute Guide   Bank is a map with three floors, from basement to 2F. While basement and 2F aren’t that big, 1F has the Lobby area and is much bigger than the other two floors. As a result, while there are only one objective locations on basement and 2F, there are two on 1F.   There are a lot of stairs and hatches in the building, meaning if the defenders use their roamers well, they can make the game a lot easier. It’s recommended that part of the defenders stay near the bombsite and hold an angle on the entrance and the windows, while the rest roam around and flank the enemy from behind. However, remember that there are routes like Sewer and Bank Garage, where the attackers can come in safely in the basement. 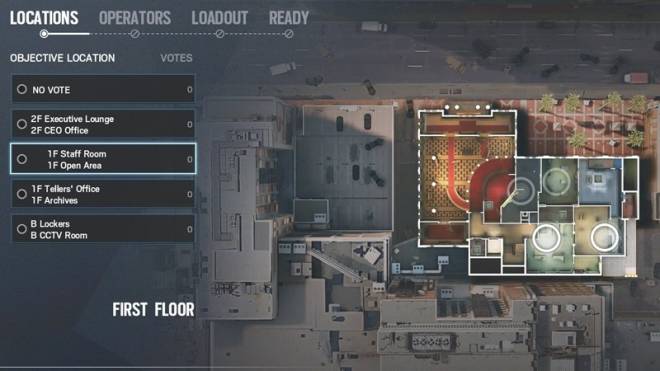 ▲ Bank’s Objective Location. Each floor has different traits, making the fights different   Mute is a support operator, who can use the signal disruptor which can deactivate the attackers’ electronic devices. By placing it behind reinforced walls you can deny hard breachers using their gadgets or place it where you expect drones to come to prevent attackers from gaining information. You can place four signal disruptors so Mute is known as one the busiest operator during Preparation Phase.   Mute can use the SMG-11 as his Secondary Weapon like the other SAS agents, so it’s common to take the M590A1 Shotgun as the Primary Weapon. SMG-11 has a fire rate of 1270, but has a lot of recoil so it’s hard to use it in long range fights, making it a powerful but hard to use weapon. If you need something for long range fights, take the MP5K. If you need to remodel inside the bombsite, you can take the M590A1 shotgun and be versatile with your guns. 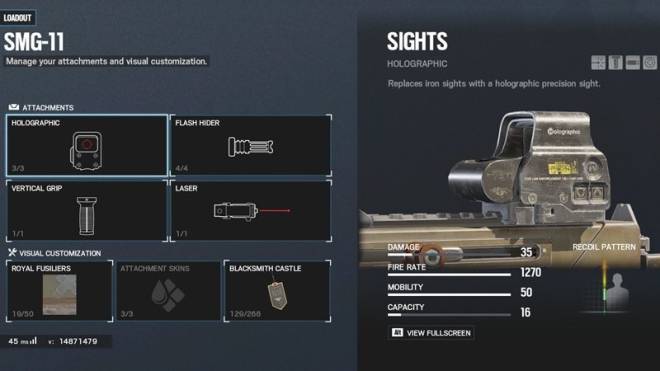 ▲ SMG-11 is a Machine Pistol, but has a fire rate of 1270, and can be used like a Primary Weapon   ▣ If '2F Executive Lounge ~ 2F CEO Office' is the site   On 2F, there often will be situations where the attackers surround the bombsite from multiple directions. The attackers often come up the Terrace, go to the Skulight Stairwell and try to break the wall at CEO Office, or come in through Stock Trading Room, and capture Hallway. Mute can place a signal disruptor behind the reinforced walls to prevent breaching. However, if you have Bandit or Kaid on your team, you shoud focus more on blocking drones.   Sometimes the attackers will rappel by the windows near the bombsite, and hold an angle there or snipe from the Lobby’s side. If you’re defending from the inside, be careful not to be exposed to these angles when positioning. 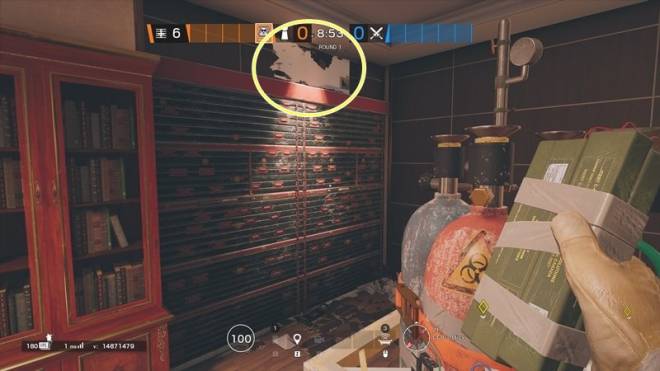 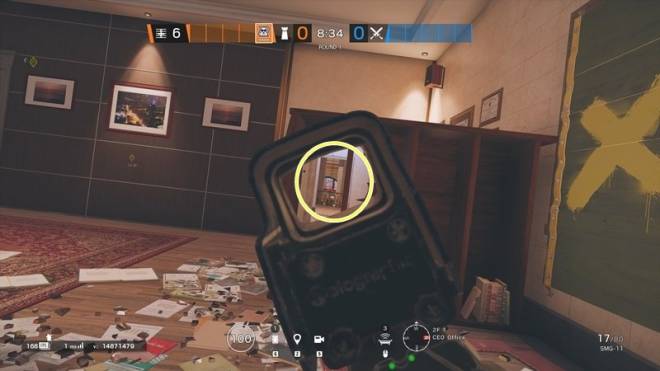 ▲ When defending from CEO Office, careful of windows and the circled angle, there can be snipers 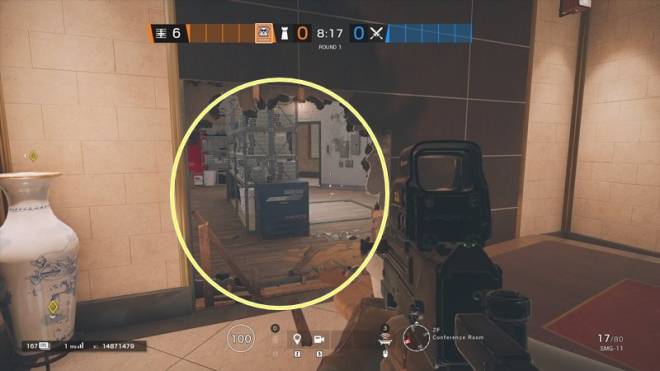 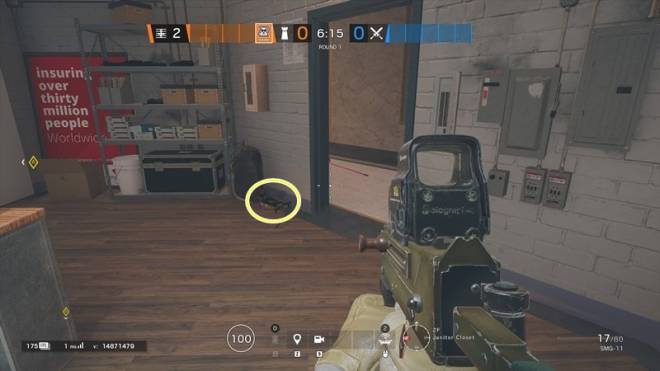 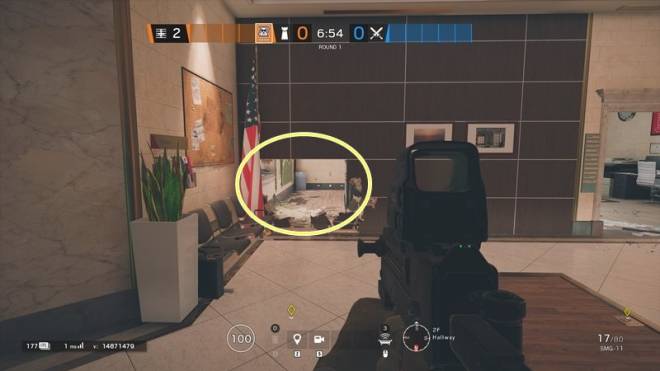 ▲ You can check if the attackers are coming, at the Hallway, if you open this side at the Stock Trading Room   If you combine Staff Room and Open Area, it’s a very wide area, making it hard to cover the entire bombsite with his signal disruptor. There are wide entrances on both sides, and at the Printer Room, there is a window leading to, outside area, Back Alley. Try to place the signal disruptors at these areas, and make sure to check if the enemy comes in through these areas.   It’s also possible to come in through the 1F Archives, open the wall to Admin office, or go to the 2F and try a vertical play or a hatch drop. There are three hatches that leads directly to the bombsite, making it extremely vulnerable if the attackers get to the hatch. 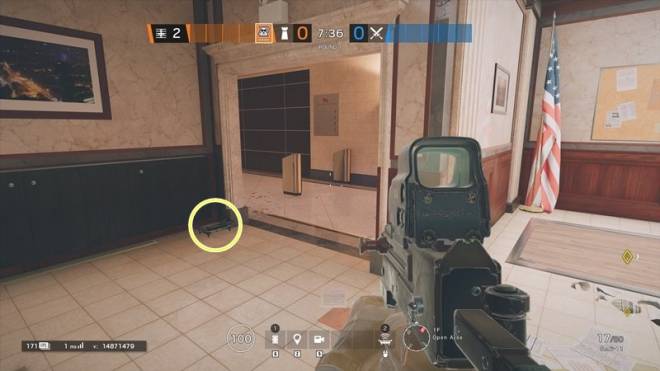 ▲ Place the signal disruptors so they don’t get shot easily 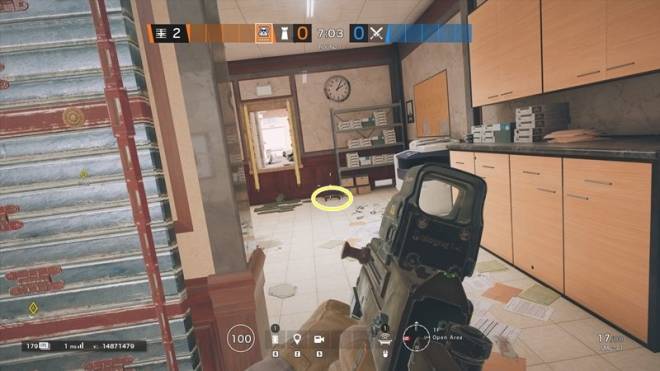 ▲ Careful of attackers coming from this window at the Printer Room. Place a signal disruptor here 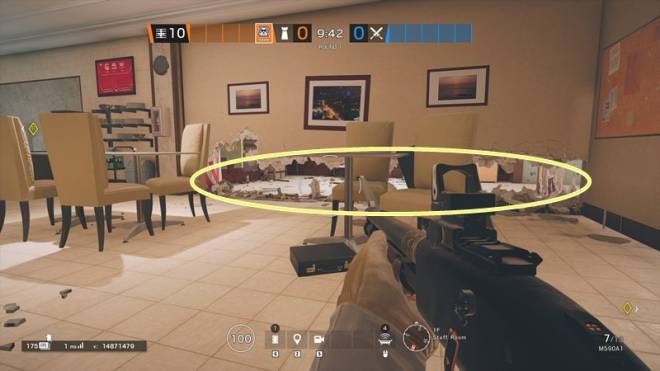 ▲ If you open this area with a shotgun, you can detect enemy that came through the Printer Room window form the Staff Room. 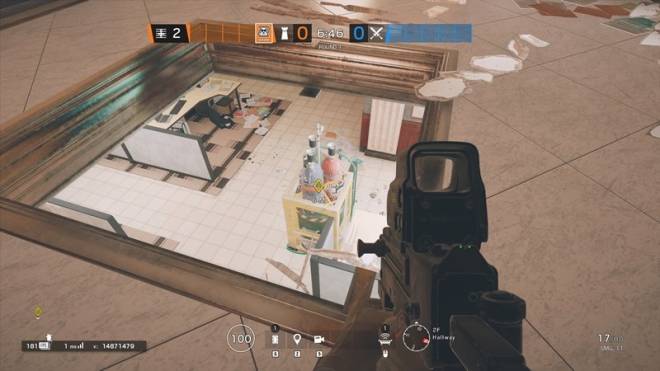 ▲ You can get a clear view on the bombsite if you open the hatch at the 2F, making it dangerous if the attackers get to it   ▣ If '1F Tellers' Office ~ 1F Archives' is the site Compared to the Open Area ~ Staff Room, this area is much smaller and there are no hatches here, making it feel like a closed area. As a result, it’s easier to stop drones. By placing the signal disruptors near each entrance, you can prevent the attackers gaining information.   While there are no hatches, the attackers can still try a vertical play from the 2F CEO Office, Conference Room, or the Executive Lounge, so be careful. It’s a small area, so if you get attacked from below and above, it will be a very difficult game. Make sure the place people to prevent this.   The attackers can breach the reinforced walls from Office Hallway to Tellers’ Office or breach the wall to the Archives from the Admin Office at the Open Area. Mute can use his signal disruptor here but it can easily destroyed by opening the floor from the 2F, so it’s not recommended. 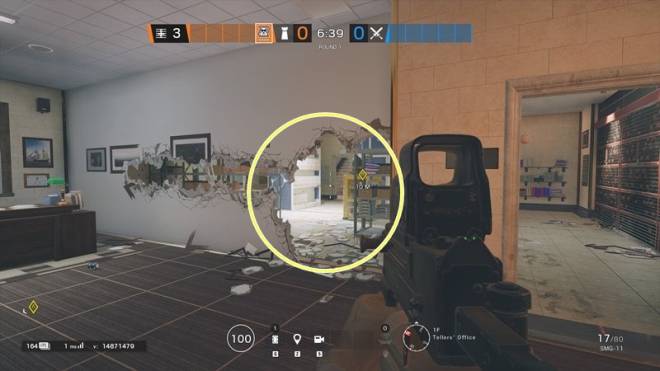 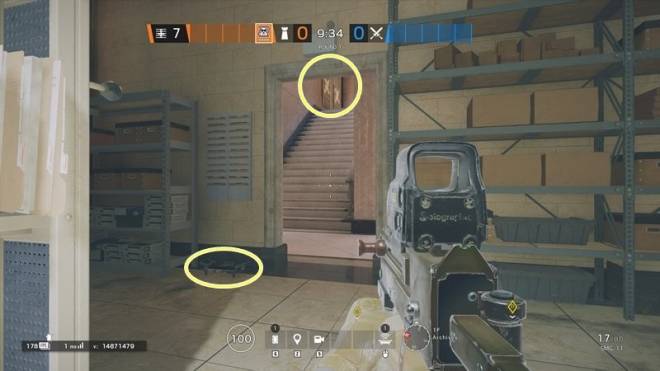 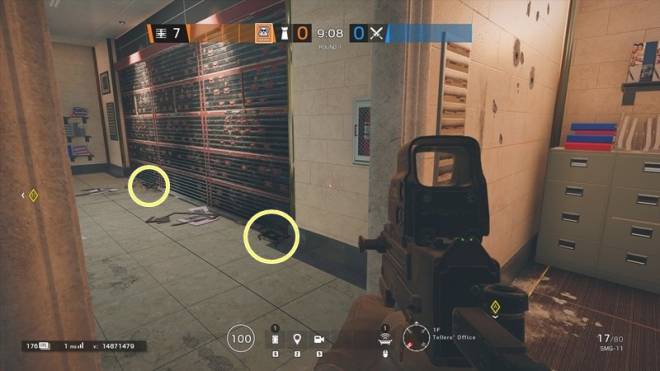 ▲ The wall at the Admin office is three walls wide, making it not efficient to use the signal disruptor on it 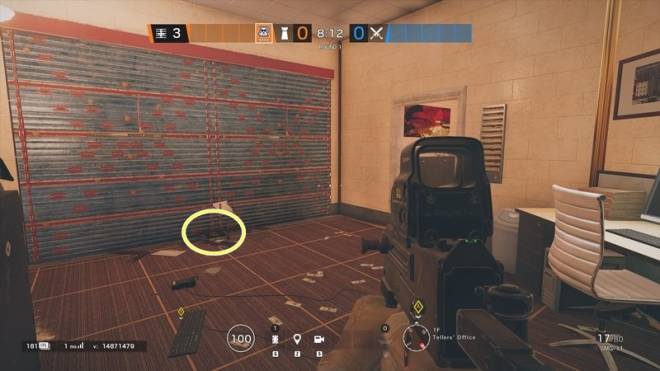 ▲ However, you can easily destroy the signal disruptor by opening the floor from the 2F. You can counter it with a Nitro cell if you want to.   ▣ If 'B Lockers ~ B CCTV Room' is the site   The basement doesn’t have any windows, but there are routes like Bank garage and the Sewer, which lets the attackers to come near the bombsite at once. As a result, defenders often use a setup where Mira places her Black Mirror where the attackers might come.   Bank’s 1F floor is mostly unbreakable, so it’s impossible to do a vertical play. However, there are a lot of hatches. The ones in Open Area and Admin Office are very close to the bombsite so have people at these areas. 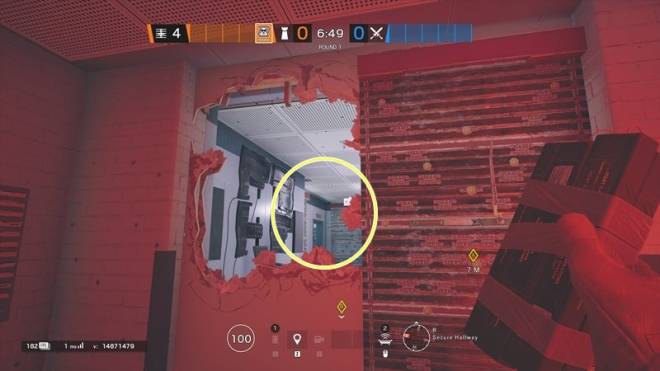 ▲ Basic setup when defending CCTV Room. If the attackers come in, you can stall by throwing a Nitro Cell. 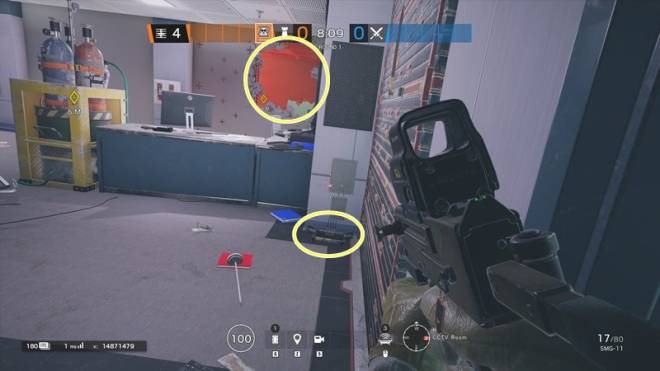 ▲ Signal disruptor position at CCTV Room. If the attackers want to destroy it, they get exposed to defenders. 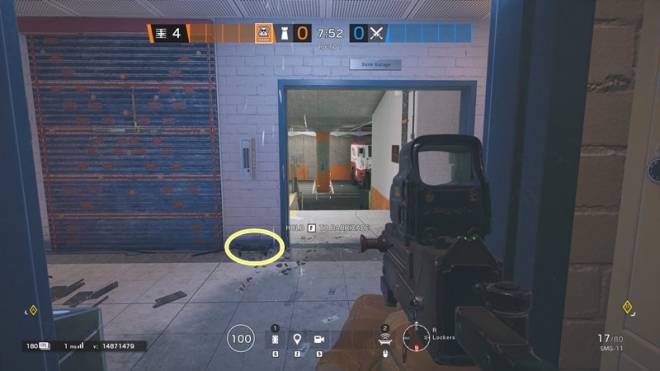 ▲ They can come from the Bank Garage too. 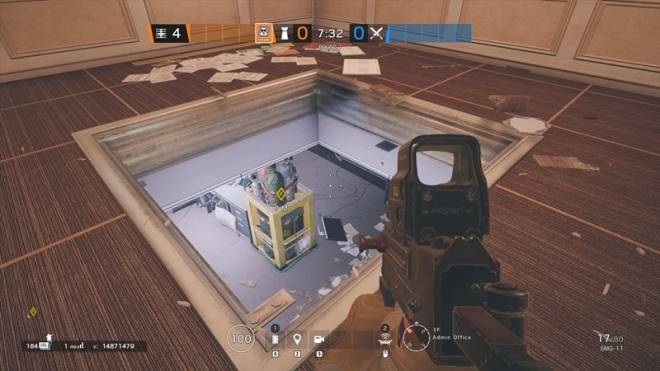 ▲ Hatch at 1F Admin Office opened. It’s right above CCTV Room, so it’s difficult to defend the bombsite opened, so don’t let the attackers open it.