Guide to Playing Warden on Chalet 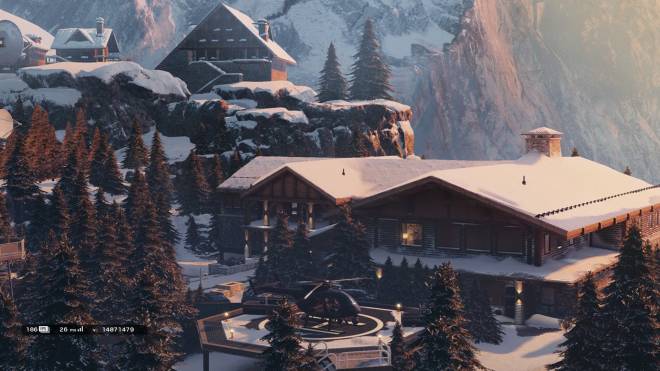 Prior to its rework, Chalet was uncomfortable to play on – for defenders and attackers alike. There were relatively few positions to hold angles from, without feeling like you were overly exposed or risking getting caught out by someone on flank watch. Kitchen/Trophy and Garage/Wine tended to be the favored sites. Since the rework, it appears that the strongest site is now Master Bedroom and Office. In my personal opinion, Bar and Gaming make for a better second but many teams prefer Garage since it's more familiar. I also believe that Kitchen/Trophy (now Kitchen/Dining) takes the cake for worst site of the map – though this may prove false in time. Roaming, while strong before, is significantly stronger now, leaving effective roam-clear and flank-watch even more essential than before. 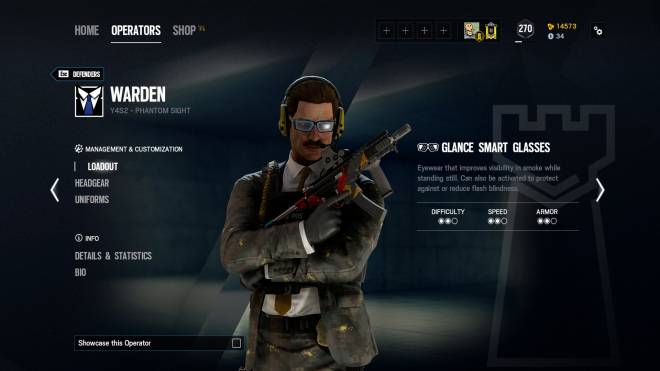 With the release of Warden, Operation Phantom Sight heralded in the ultimate answer to an attacker composition loaded with stuns and smokes. This makes Warden a rather situational defender, excelling against particular attacking rosters designed to pull off a “smoke execute” with the intent of planting the defuser. He is rounded out a bit though as a two-speed, two-armor operator who brings mediocre fire power with some of the best secondary utility in the game. As an added bonus he is perhaps the most suave operator in the game with unmatched impeccable style.   WARDEN’S GADGET Warden comes equipped with the Glance Smart Glasses. Upon activation, the glasses grant immunity to blinding effects from flash grenades, Blitz’s shield, and Ying’s candelas. If already blinded, the glasses will cleanse this, returning vision. Additionally, Warden gains vision through smoke, though the clarity fades with positional changes including walking, leaning, and crouching. Standing still will cause clarity to return shortly. The glasses function using a charge mechanic. They drain over the course of 10 seconds and recharge over 12 seconds. As long as the glasses have roughly one third of the charge, Warden can activate them.   PLAYSTYLE & COUNTERS Warden best uses these glasses to gun down the attacker going for defuser-plant. They also allow you to perform as a thorn in the side of attackers, enabling you to hold positions that are difficult to deal with – positions that attackers traditionally use flash bangs to handle. As for counters, watch out for Thatcher, since his EMPs will disable your glasses. If zapped by Twitch’s drone, the same will occur. IQ can also detect your position while your glasses are in use, which can leave you vulnerable to wall-bangs and prefires in certain situations. You are also incredibly vulnerable to a well-cooked frag grenade and Capitao’s fire bolts. Zofia’s concussion grenades will still affect you completely, and Glaz is a formidable foe since he can see through smoke as well.     LOADOUT 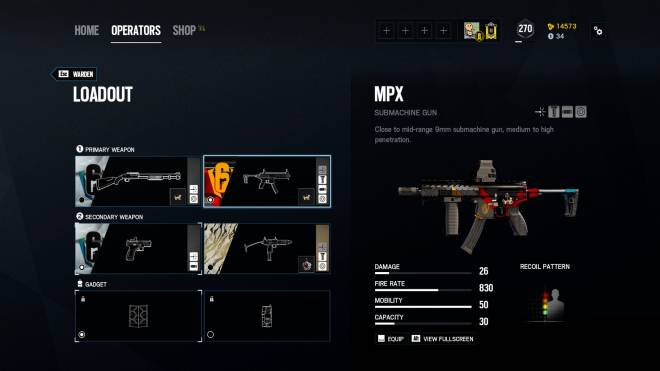 Warden brings either the MPX or the M590A1. The MPX offers an SMG with virtually no recoil at the expense of pitiful damage output. As of Operation Shadow Legacy, you can equip it with the 1.5x scope, which combined with its tasty fire rate of 830, makes it a headshot machine. The M590A1 allows Warden to remodel site as well as hold very tight angles. This CQB shotgun favors the playstyle that aims to be a nuisance for attackers to deal with. As for secondaries, Warden brings either the P-10C or the SMG-12. The SMG-12 is very difficult to use, especially at range, but provides a fully automatic weapon for those who bring the shotgun, and performs much better in close quarters than the MPX. The P-10C, in contrast, is blessed with a clean sight and some low recoil, with respectable damage and low recoil. Great for spicy long-range 1 taps!   The Nitro Cell is perhaps the best secondary gadget available to defenders. With it you can take out attackers above you through destructible ceilings, or toss it over some cover from a safe position, detonating it to wipe out attackers. This is also the best gadget in the game for securing multi-kills. It fits well into Warden’s kit for use as plant-denial.   The Deployable Shield is an amazing choice as well. It creates additional positions for defenders to play on site while watching key areas. While covering these areas you can prefire at attackers thanks to the intel gained via the see-through slits. As an added bonus, this allows you to bring a gadget which forces attackers to expend their own utility in order to deal with it.   DEFENDER BOMBSITES 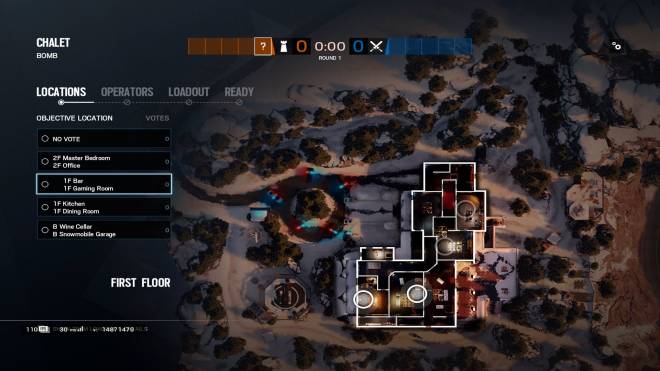 BOMB SITE 1 – Master Bedroom [2F] and Office [2F] The main approach to this site comes through Fireplace Hall. Teams pushing here will mostly clear Library and establish flank watch so they can breach Office and plant in the pocket by Wine Rack. In addition, they may send someone onto East Balcony to pressure Office further and West Balcony to pressure Piano. Holding Piano and Bathroom with a rotate or two in Closet creates more opportunities to control site perimeter. If attackers don't take control of East Balcony, use the window to your advantage as an angle or rotate against attackers in Fireplace. Garden is not a common option for main pushes, but it is a prime candidate for flanking attackers, so keep an eye on it. Lastly, attackers can rappel Master window, but there are so many run-out opportunities that it is a bit of a death wish.   If you bring the MPX this half wall in Office gives you an amazing perch to cover the site perimeter as well as Garden door. The only issue with this position is if attackers breach the corner behind you. 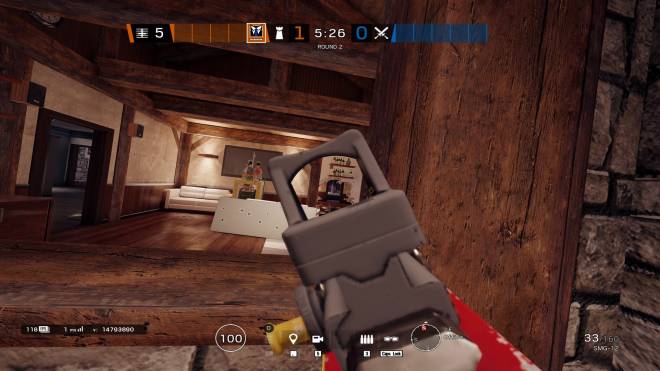 Alternatively, play this shield, or even consider placing the shield in the hallway flush with the doorway. This allows you to contest the site perimeter and keep an eye on Piano window. 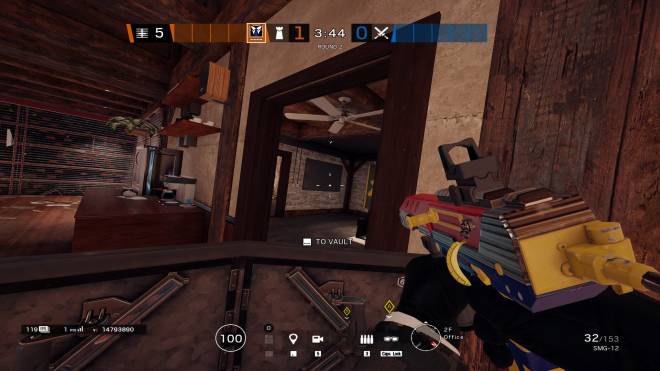 When playing this shield, be wary of Balcony door and Master window. Reinforcing the corner on ping gives you another excellent position to retreat to. The table between will offer cover while rotating between spots. 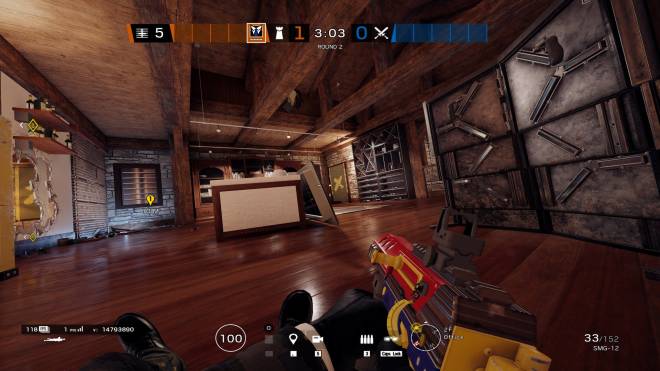 If you bring the shotty and defend the Office, consider this shield on Wine Rack to cover Balcony door. You can also sit behind the half wall, waiting to swing on attackers pushing in Office Breach so you can blast them point-blank. 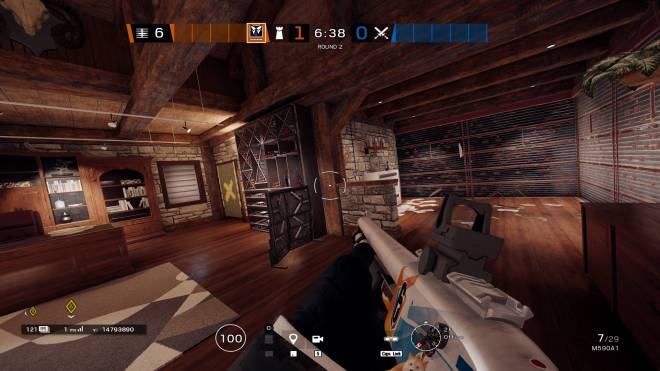 This is another amazing shield to defend site from, particularly if you run the MPX. It sits against the reinforced pocket in Master and can keep an eye on Balcony doorway. 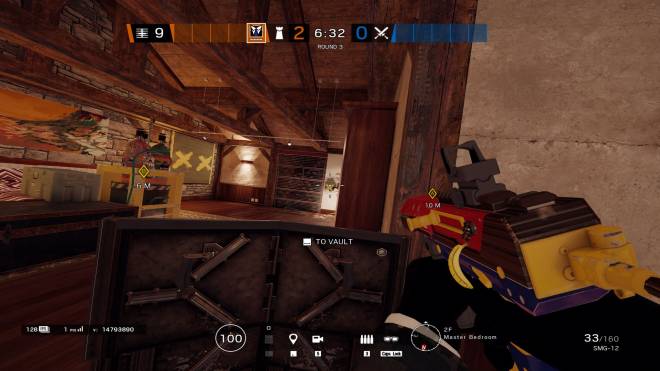 This rotate in Bathroom can be great for moving around without overly exposing yourself to multiple angles. And Bathroom is an excellent room to hold with Warden's shotgun. 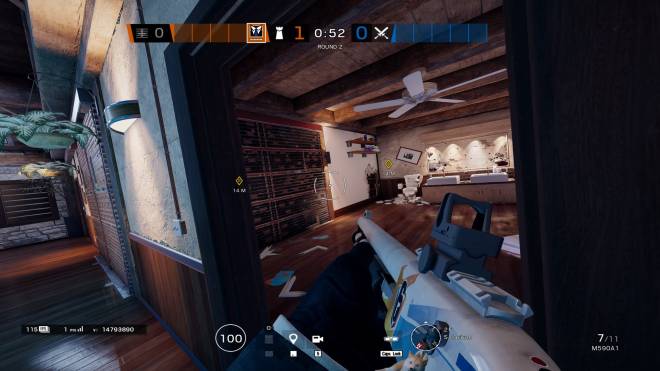 This line of sight, combined with the rotate into Office, gives you the ability to cover Balcony door and even Piano from yet another angle. You can even make this into a complete rotate if desired to give anchors added mobility. 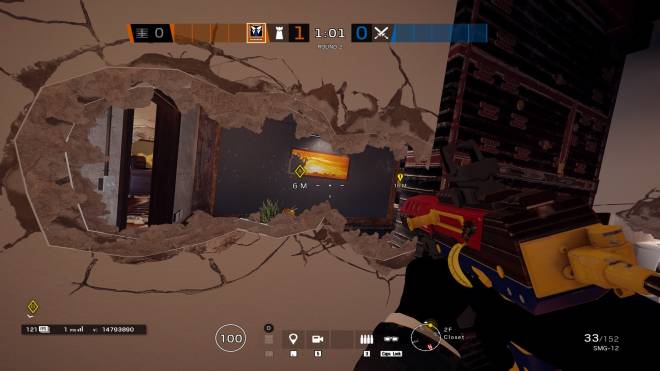 BOMB SITE 2 – Bar [2F] and Gaming Room [2F] Bar and Gaming was previously the least popular site in many ELOs – so most teams feel uncomfortable defending it. Now, however, it offers a pretty reliable defense. Since Gaming is difficult to penetrate, attackers are mostly forced to focus their assault on Library and Bar. This makes a push from Garden and Office the best bet for attacking teams. This approach is vulnerable to flank paths from Garden and features many destructible floors for roamers playing with C4s in Dining and Kitchen below. Site entrances can be defended by two anchors and one lurking Library Stairs to control perimeter. This player can also support whoever holds above in Library. The last can play C4s below the attackers' approach and possibly flank.   This reinforcement and line of sight help kep an eye on Gaming window and Mudroom. The shield on Pool Table keeps you safe while rotating between. 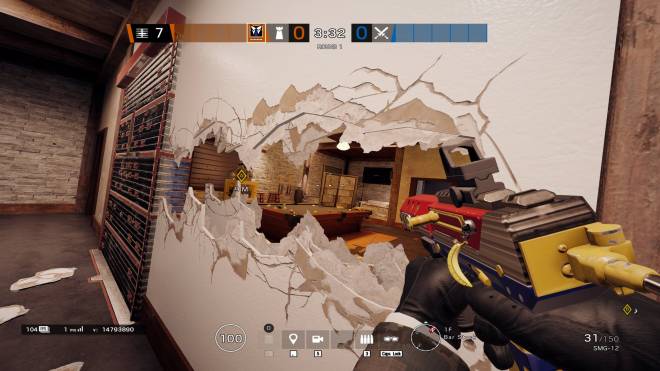 This line of sight gives another point to contest Gaming window while rotating between the reinforcements for cover. Make a rotate next to Gaming Doorway as well since that rotate isn't exposed to site window. 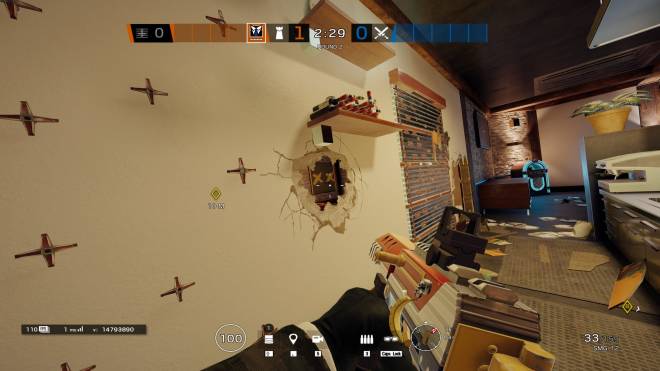 If you run the MPX you can play this shield in Bar watching Fireplace windows. Just be careful for attackers on the window to your close right on the stairs. 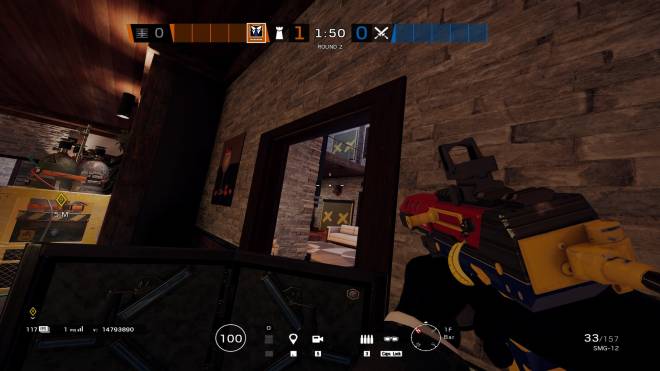 With the MPX you may also need to keep an eye on pushes coming through this hallway. The wall and hatch should be reinforced to keep you safe in this area of Bar. Just be wary of attackers opening the wall on ping. 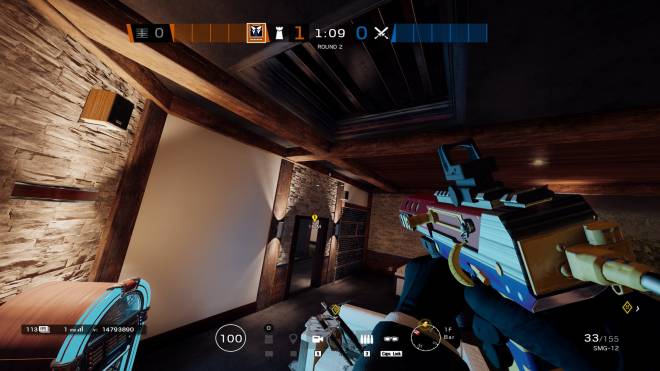 A great position to play when defending this site is these stairs since you can contest attackers in the hallway above or below. This position is best held with the MPX. 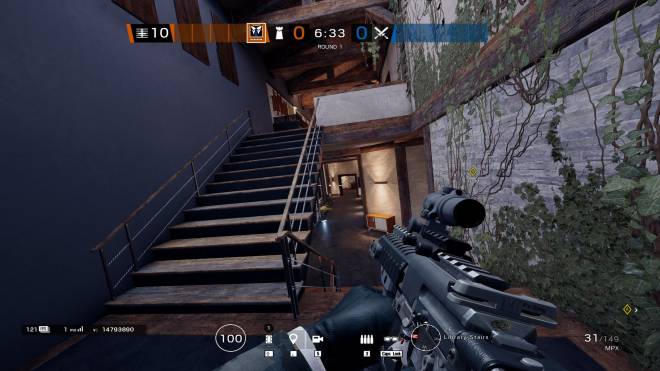 With the shotty you are pretty equipped to deal with holding Library. This corner is a pretty safe default place to sit, and you can swing on attackers vaulting in the window on ping while watching Gaming window below through the hatch. 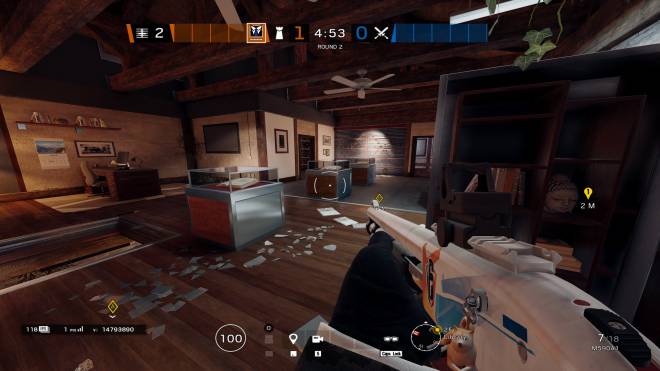 BOMB SITE 3 – Kitchen [1F] and Dining Room [1F] This was previously the community favorite in most ELOs. Now though, it is quite difficult to hold onto Trophy since the staircase provides attackers with an easy pinch. This creates a common pressure point to be wary of. There are also a surplus of Soft Walls surrounding Site demanding reinforcements, and not a ton of cover in the site itself. The Kitchen Hallway is going to be a powerful position to hold onto, but can potentially be exposed to many angles and requires finesse to work properly. The main breach seems to come through Fireplace with a Dining Wall breach. And attackers will split pressure either above, or on West main, or Trophy. But the meta is still early and developing.   Playing on ping using this shield and reinforcement makes for a safe and influential anchor position. You can play here with the MPX or the shotty, but if you bring the shotty, open a rotate next to the reinforcement. 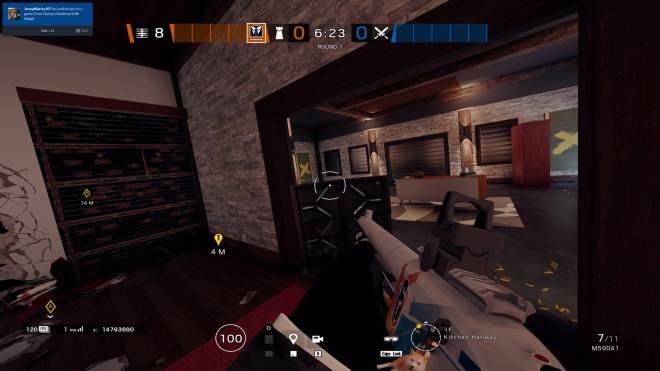 Place another reinforcement here and make sure the hatch is reinforced, opening this rotate too if you bring the shotty. If your team has an extra shield, have them place it here. This half wall is a great spot for the MPX. 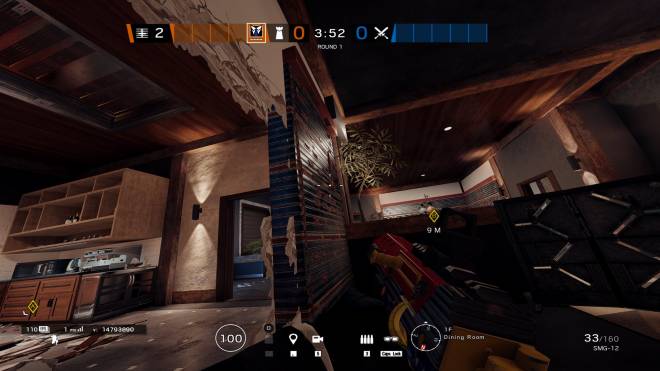 Watch for flanks coming through West Main or coming from Trophy. These three reinforcements will help protect your team from these flanks. Notice the line of sight between Kitchen and Trophy for watching attackers trying to vault in Trophy window. 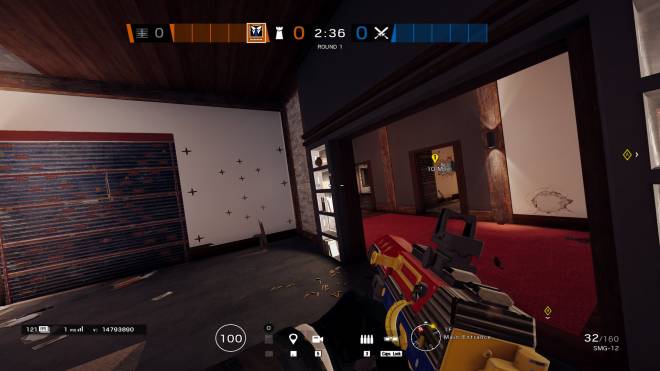 You can play this Kitchen corner with a shotty to keep an eye on Trophy window and potentially play vertically against attackers breaching the ceiling from Master Bedroom above. 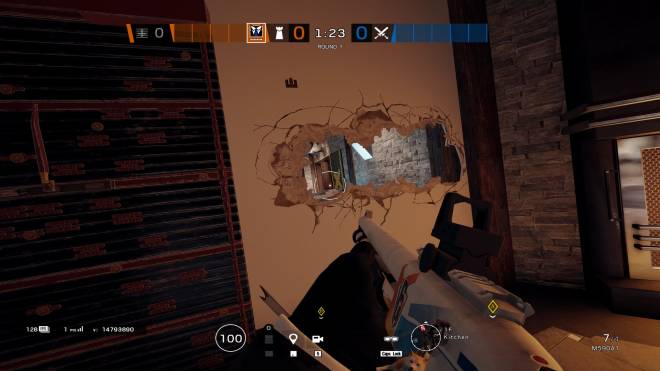 Alternatively, you can play the breach close with a shotty, falling back to Dining Table or dropping hatch if needed. 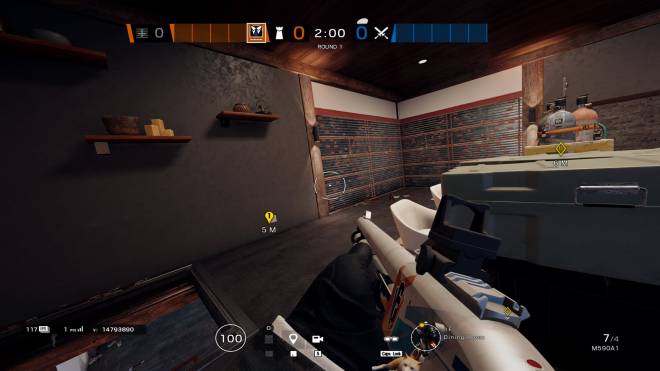 BOMB SITE 4 – Snowmobile Garage [1F] and Wine Cellar [1F] This site can be easily attacked if they bring multiple hard breachers and just blow all the walls open. If this is allowed, there are very few places left to sit in site safely. The site is best held from Connector (between sites) and 90 Hall (Blue Hallway) with another anchor in either Garage or Wine. Roamers should work on delaying control over Fireplace or delaying the breaches.   If you prefer the MPX consider playing this shield in 90 Hall watching Blue Stairs. 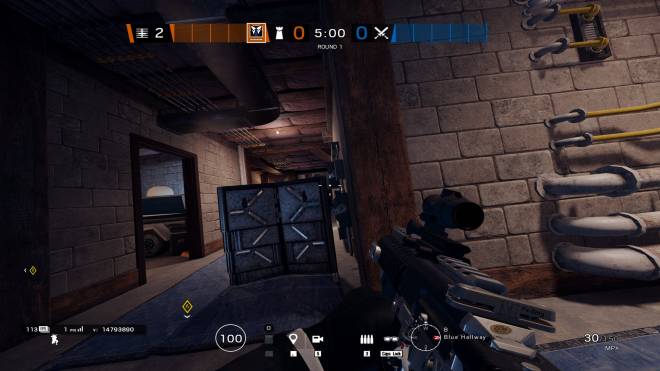 Alternatively, you can play this shield in Wine which covers the doorway and even the Boiler breach if attackers open the wall. 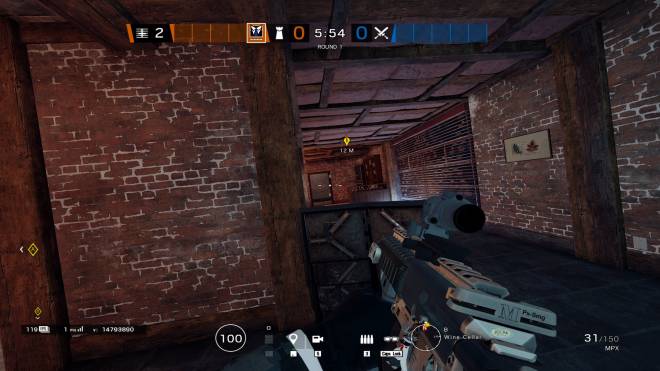 You can slip into Connector so long as the hatch above is shut and keep an eye on default plant. 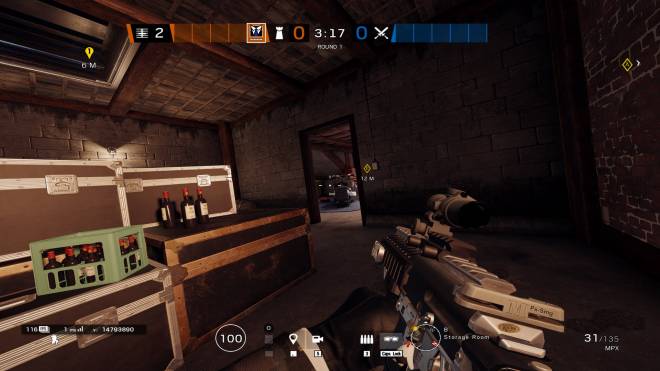 If you're bringing the shotty make the rotate here where it is least exposed to attackers in 90 Hall. When playing the shotty, sit on Fireplace stairs and keep an eye on this window. You can also go for nitro-chucking plays through the window on attackers breaching below. 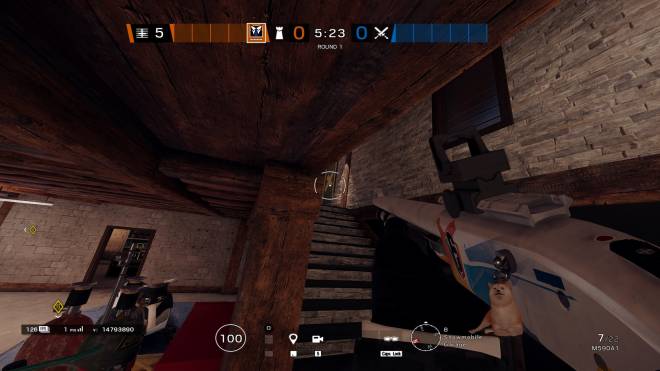