Guide to playing 'Mute' in 'Chalet'

Chalet received a rework on last September during the Shadow Legacy update. The map still consists of basement, 1F, and 2F, but there have been some changes to the bombsites, and it would be useful to know them. Previously, there has been a lot of angles for the offensive team to attack inside of the building from the outside, but after the rework, those angles have been reduced so it feels more balanced.   The Objective Locations are still placed, one on the 2F, two on the 1F, and one in the basement, same as before. However, due to the change in bombsite location, the Objective Location which was Kitchen ~ Trophy Room changed to Kitchen ~ Dining Room. The bomb site itself is still the same and there were only minor changes so it shouldn’t be hard to get used to it. 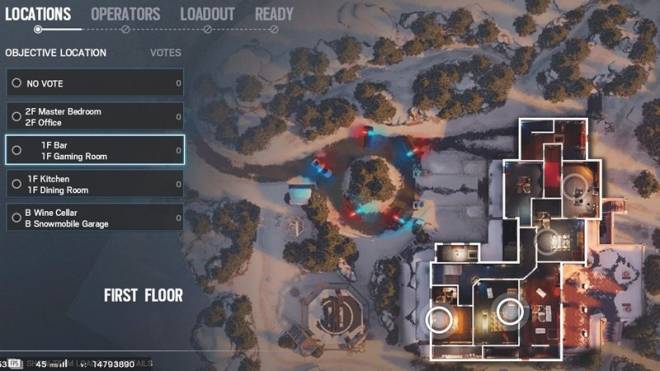 ▲ Chalet’s Objective Location, 1F’s Kitchen ~ Trophy Room changed to Kitchen ~ Dining Room   Mute is an operator that can install the Signal Disruptor, which deactivates the offensive team’s electronic devices. Signal Disruptors are usually placed in an area where the offensive team’s drones go, to prevent them from gaining information, or installed behind reinforced walls to deactivate breaching equipment. Only Mute and Mozzie are able to disable the offensive team’s drones and it is a very useful ability.   Mute can use the SMG-11 Machine Pistol as his secondary weapon so the M590A1 Shotgun is often used as the primary weapon. M590A1 is a pump-action shotgun, but it has a long-range for a shotgun and is great at breaching walls. If your team needs you to Remodel, then you can go for this. However, the SMG-11’s recoil makes it hard to use in long-range shots, so if you need long-range, you can use the MP5K. ▲ After the Shadow Legacy’s sights rework, you can now use the Scope 1.5x on the MP5K   ▣ If '2F Master Bedroom ~ 2F Office' is the site Before the rework, the offensive team would attack the bombsite by climbing the Bedroom terrace, but after the rework, the terrace is gone and it was merged with the indoor area and is now called Solarium. This area still has windows that allow the offensive team to attack the inside of the building, but the walls in Solarium blocks the path to Bombsite, so you can no longer freely attack the bombsite. There has been a lot of changes to the structure of the map and the location of the windows are quite different, so the defensive team should be aware of the window locations and be careful not to get attacked from unexpected angles.   The offensive team can infiltrate and try to breach the walls around the bomb site, but if Mute places his Signal Disruptor on these walls, the breaching equipment of the hard breacher will be jammed. Players often climb through the office Balcony and breach the walls in Mezzanine, or capture Solarium and breach from there. If you don’t have Bandit or Kaid in your team, it would be a good idea to place a Signal Disruptor here too. ▲ Now that Solarium has been added, you should have in mind the offensive team rappelling from this window. ▲ If you use the wall on the left as cover, you can have an angle on the window ▲ On the left side of Solarium, there is one window in the Master Bedroom… 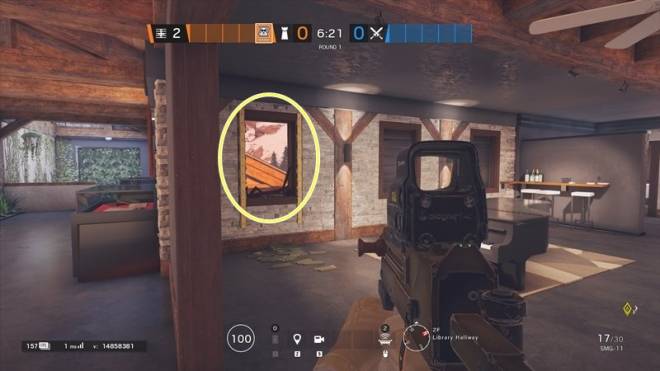 ▲ And there is another window in the Piano Room. Be careful of these angles. 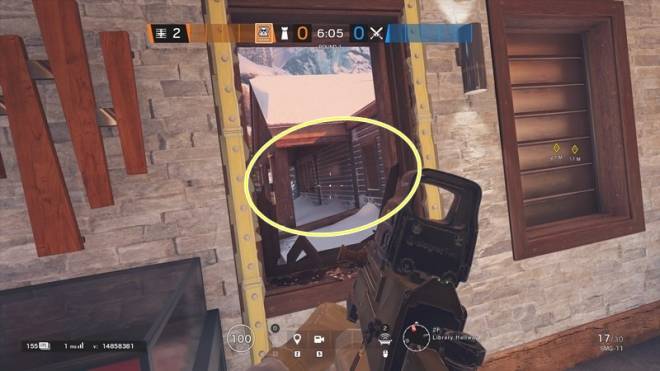 ▲ If the offensive team tries to use the windows mentioned above, you can use this window in the Library hallway to get an angle on the offensive team.   ▣ If '1F Bar ~ Gaming Room is the site Each bombsite is blocked by walls and placed in line so it’s recommended that you breach this wall and make a rotation. Having the M590A1 here as Mute would be very helpful for the team. Apart from this, a new area Bar Stock has been added so you can use this area as Rotation.   If the offensive team tries to attack through the gaming Room, you can defend from the Bar and the 2F’s library, and if they try to attack through the bar, it’s best that you defend from the 2F Mezzanine. Previously, the Gaming room had a lot of windows and doors that gave angles from the outside of the building to the inside. After the rework, there is only one window that goes outside and became very good for defense.   In this area, Mute can use the Signal Disruptor as jamming drones instead of reinforcing walls. If you really wanted to use it to defend walls, you can use it to reinforce the walls in the Bar area, but the Signal Disruptor’s range can cover the drones in the hallway so it’s not a bad choice. ▲ You can break the wall to the Gaming Room from the Bar and use it like this. Would be even better if you had Mira’s Black Mirror. 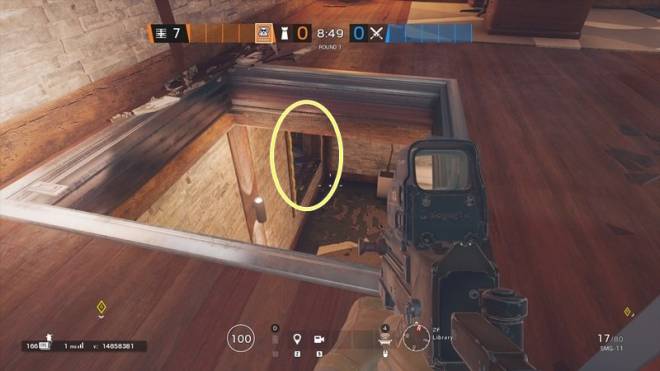 ▲ Even after the rework defending by looking down the hatch is still viable. 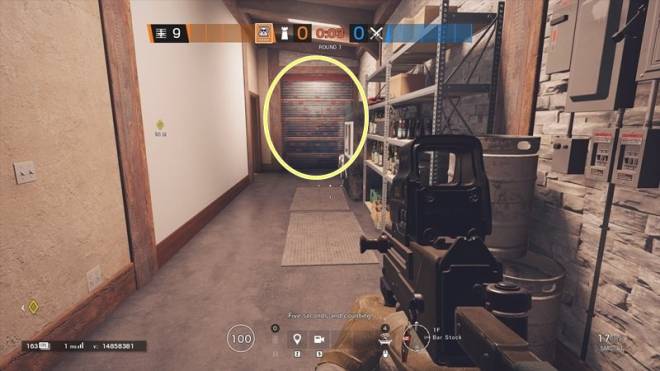 ▲ A new area that connects each bombsite called Bar Stock has been added. Highly recommend reinforcing the circled area. 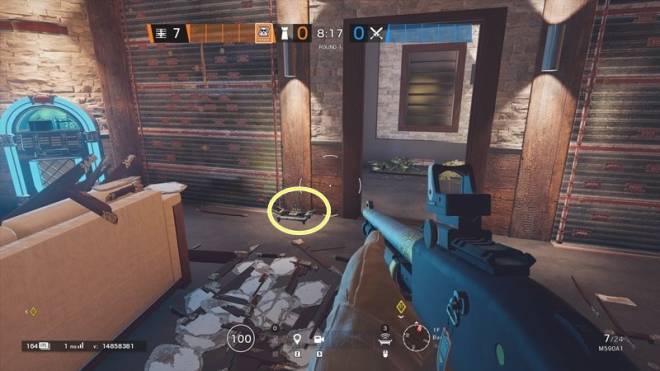 ▲ Place Signal Disruptor here to deactivate drones and reinforce the wall at the same time. ▲ There is a hatch that goes straight from the 2F library to the Bar so have in reinforced. 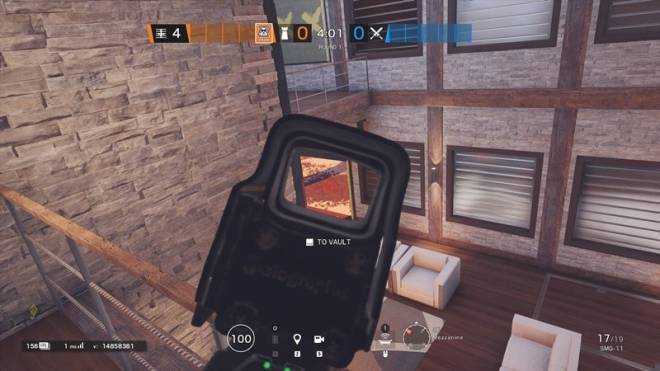 ▲ You can have an angle on the enemy from the 2F Mezzanine if they are coming from the Fireplace to the Bar.   ▣ If '1F Kitchen ~ 1F Dining Room' is the site Due to the rework, the bomb site in the Trophy Room has been moved to the Dining Room. This might make you feel like the Trophy room is useless, but a new staircase that connects the Trophy Room to the 2F Solarium has been added. Combined with the windows in the Trophy Room, the total number of attack routes for the offensive team has been increased so it’s not a good idea to leave this room neglected. Sometimes, players breach the wall to the Kitchen and defend from the Trophy Room.   Since the bombsite is located on the 1F, the offensive team can come through the 2F and try a vertical play. The hatch originally located in the Master Bedroom has been moved, but it still leads to the Kitchen so the offensive team may try to breach through here. They are both annoying to the defensive team, so it would be wise to place people on the 2F.   The offensive team may come through the Fireplace and breach the wall to the Dining Room. If this wall is breached, the Dining Room gets too exposed so if you don’t have Bandit or Kaid on your team, have a Signal Disruptor placed on the wall. 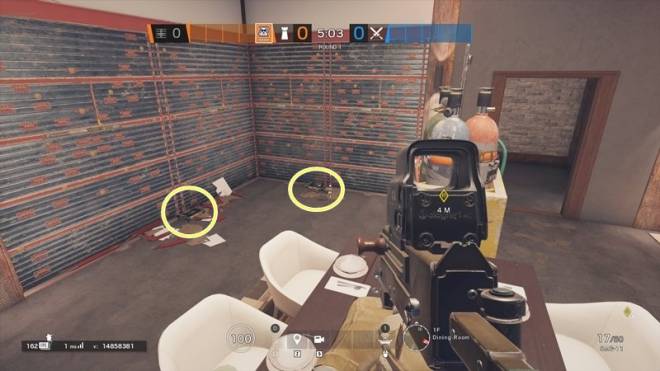 ▲ Signal Disruptor location to prevent breaching the wall from the Fireplace to the Dining Room. ▲ A new staircase has been added to the Trophy Room that leads to 2F Solarium. 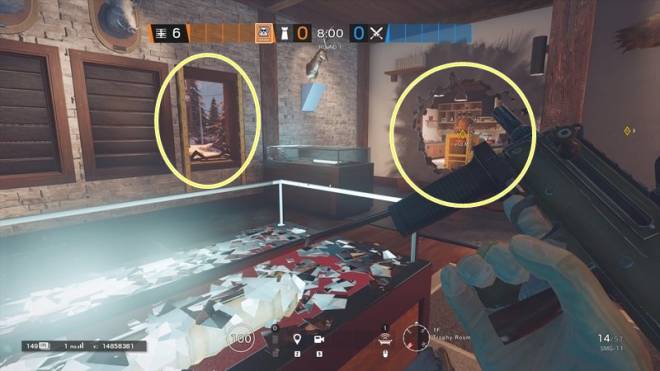 ▲ The window in the Trophy room still exists, so it might be a good idea to break down the wall to the Kitchen while defending. 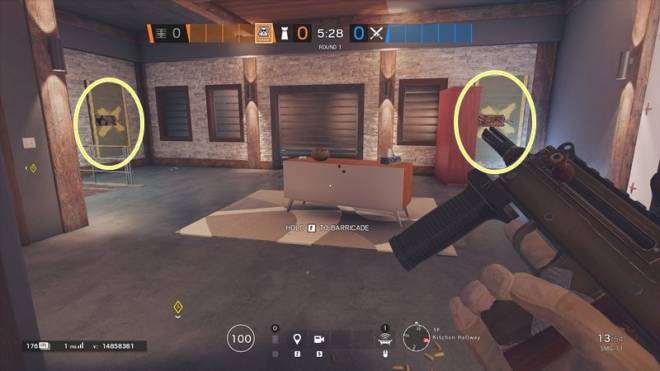 ▲ Have in mind the possibility of the offensive team coming through the Main Entrance. 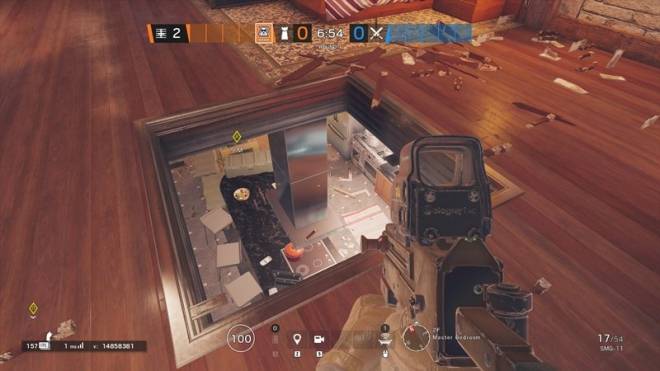 ▲ The hatch’s location on the 2F Bedroom has been changed, but it’s still on top of the Kitchen reinforcing it is a must.   ▣ If 'B Wine Cellar ~ B Snowmobile Garage' is the site   Even after the rework, it’s still crucial to have the 2 walls in the Snowmobile Garage covered. Mute can reinforce the walls with his Signal Disruptor, but Mute’s Signal Disruptor can’t be used for Bandit Trick so if possible it’s best for the defensive team to have Bandit or Kaid. Therefore as Mute, try to use the Signal Disruptor to jam drones. However, the Wine Cellar has gone through a lot of change after the rework. Previously, there has been a small room in the Wine Cellar called the Wine Stock, but now it became one big room. Also, a new path that leads to the Snowmobile Corridor has been added here so there are a lot of places the defensive team can use.   The hatch in the Bar that leads to the basement from the 1F has been removed. Now the hatches that lead to near the bombsite are the two in the Fireplace and the Dining Room. Both are very crucial so make sure to have them reinforced. 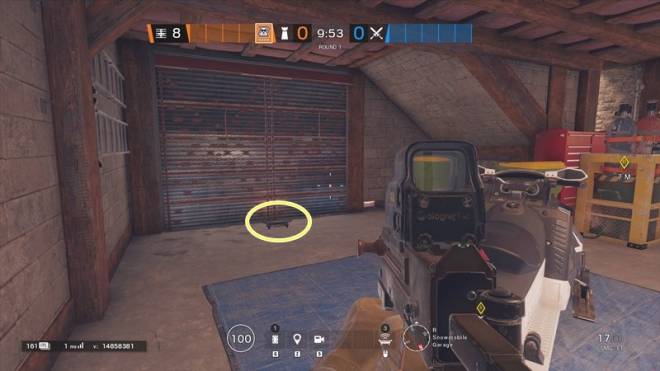 The wall at the Snowmobile Garage is still important, but if you have Bandit or kaid on the team, it’s not necessary to use a Signal Disruptor here. ▲ Can still breach this wall in the Wine Cellar and place a Black Mirror. 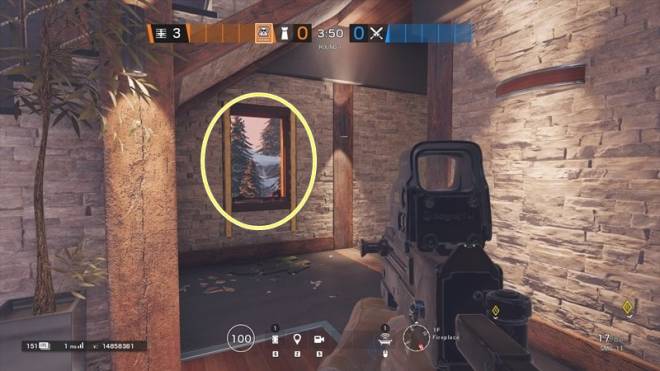 ▲ If you open this window here in the 1F Fireplace and leave the runout, 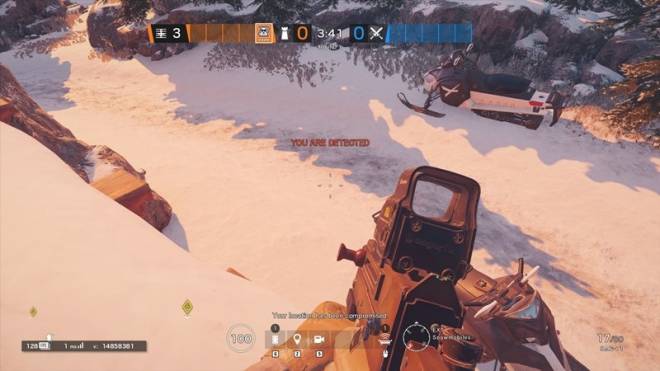 ▲ You can ambush the offensive team trying to breach the Snowmobile Garage walls. 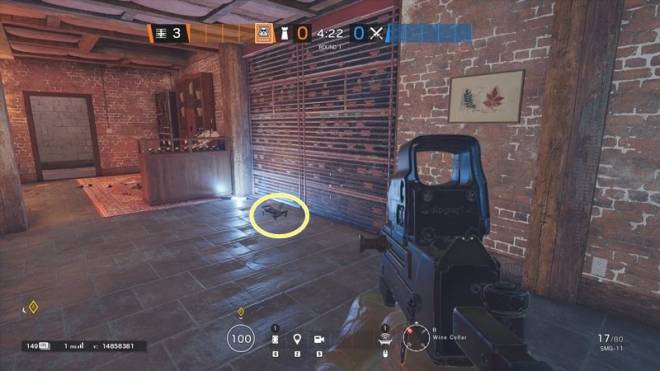 ▲ Wine Stock has been removed and Wine Cellar became one big room. 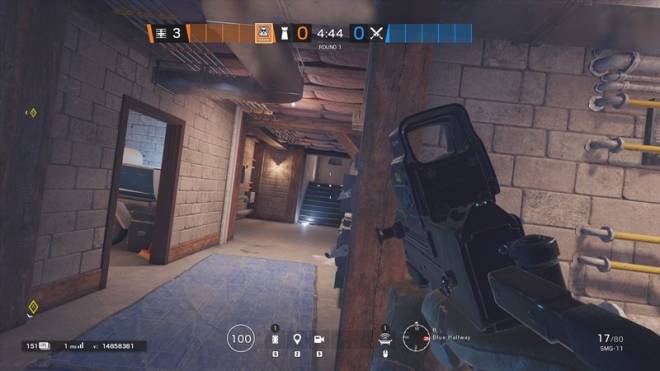 ▲ Blue Hallway has been added to the Snowmobile Hallway’s side so now you can get an angle while taking cover. 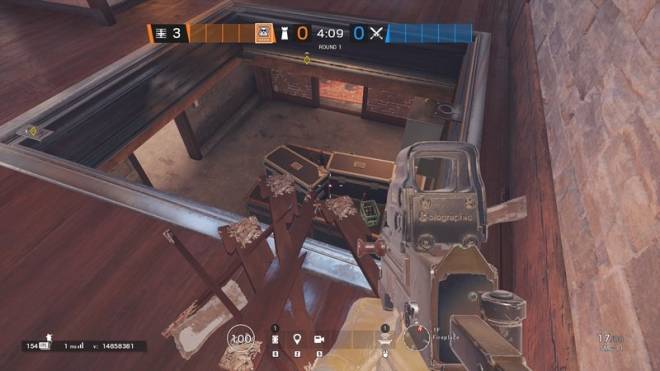 ▲ After the rework, only the hatches in the Fireplace and the Dining room are left.