Guide to Playing Wamai on Consulate 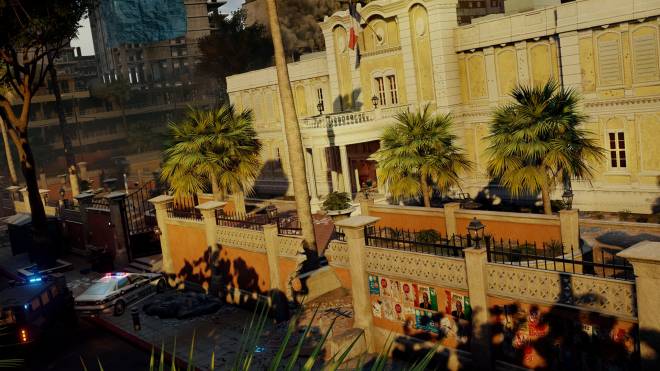 Consulate is one of those maps that really favors playing for picks and fragging out so it sees plenty of spawn peeks and run outs, especially if Valkyrie is on the board or Nomad is banned. With three large floors, three staircases, and plenty of hatches, a full roam-clear on attack can be pretty tedious. 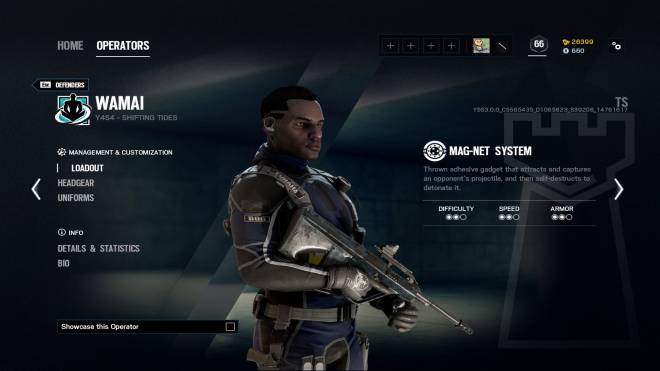 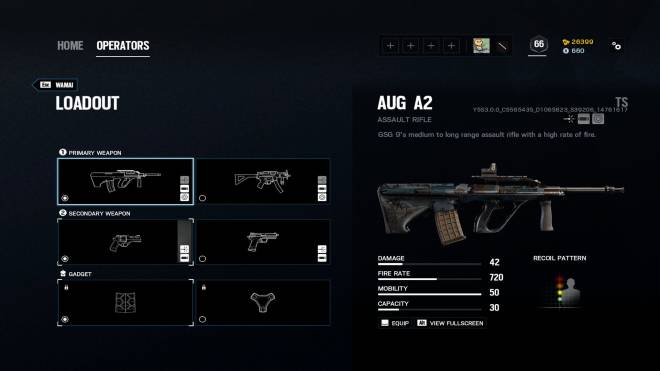 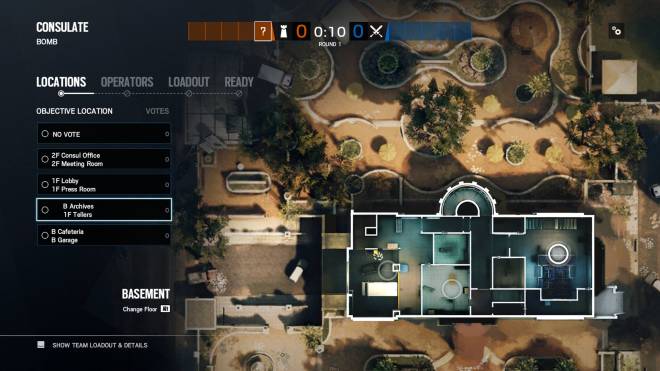 BOMB SITE 1 – Consul Office (2F) & Meeting Room (2F) This site on the top floor tends to be the preferred site for most teams. The most difficult part of defending the site is when attackers establish multiple rappels on the many windows surrounding site, cutting off site rotations. The glass on the windows can be shot out to better hear rappels and respond early. Waiting Room, the connector, is the strongest window for attackers to rappel on, but they also rappel on the site windows and other nearby windows. Attackers pushing into the building may push primarily from Administration Office or Yellow Stairs, but may also flank either Visa or Spiral Stairs.   It is common for Jaeger or Wamai to play Yellow Stairs, delaying the push as long as possible using their gadgets to intercept projectiles. You can even make some lines of sight through the wall to allow you to watch for attackers rappelling in B windows. If you play here, ask for a rotate to be made into Bathroom. 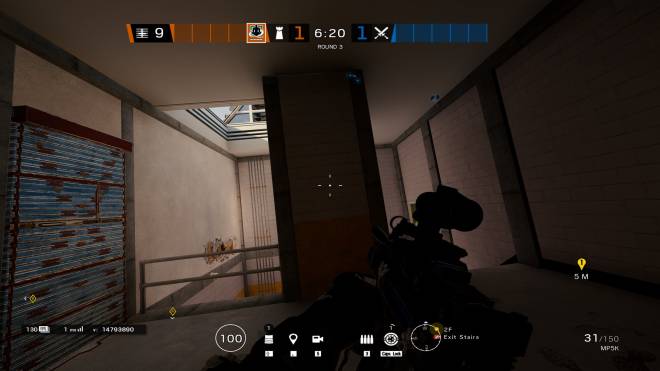 Alternatively, play behind this shield, protecting it with your frisbees. This reinforcement keeps you from being shot at from attackers rappelling Bathroom window. 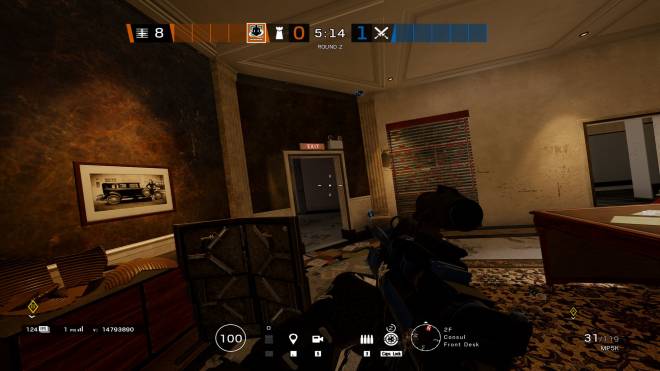 These two reinforcements make sure you aren't shot in the back while playing the shield. 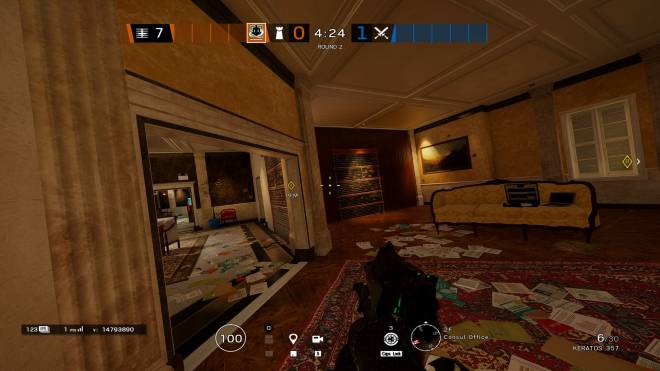 You can even swing around to cover B windows, which is handy since attackers commonly try to smoke off site so they can plant. 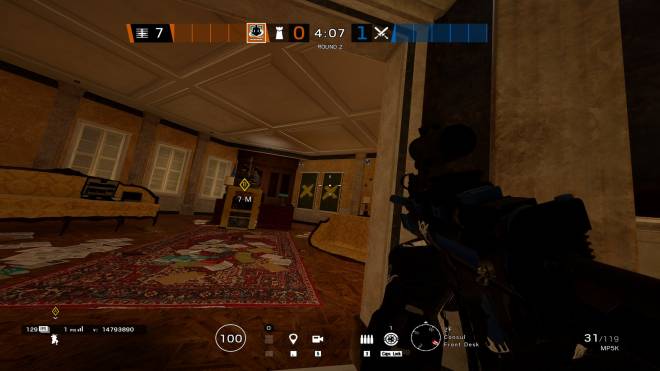 Making some holes in the desk allows you to peek at attackers pushing Spiral or Vending Machines while prone. 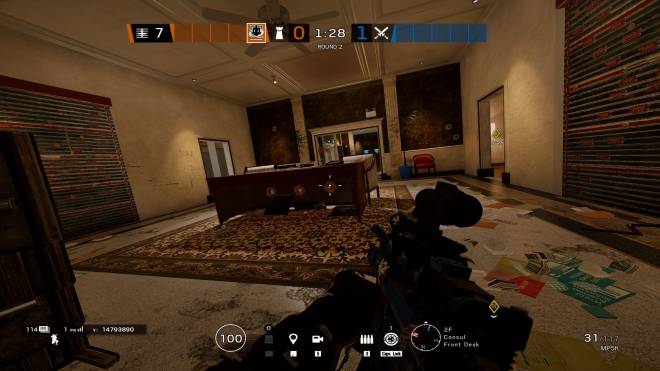 If your team needs coverage on Meeting Room, or attackers consistently push Admin side, you can set this shield up and play your discs around this doorway and A windows. If attackers do keep pushing this way, you will want a teammate to protect the reinforcements with breach denial. 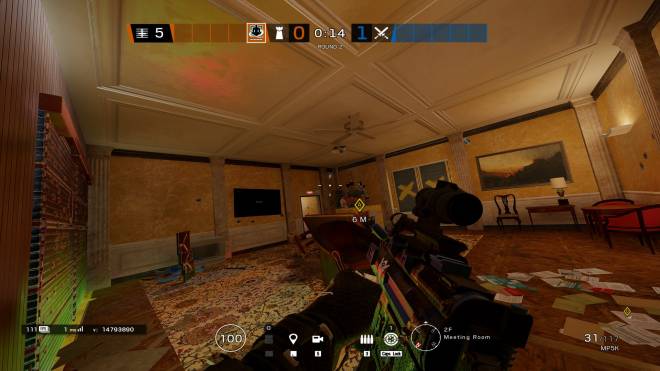 BOMB SITE 2 – Lobby (1F) & Press Room (1F) Lobby & Press Room are best defended with aggressive peeking to waste time and eventually plant denial. Attackers mostly just need to make sure roamers aren’t watching from above before attempting a smoke plant in Lobby, but if Press Room is caught unattended, they may instead swing in there to plant, or rush from Yellow Stairs.   Most projectiles are likely going to come in through the front door. Positioning here with this shield will allow you to deny this from happening as attackers seek to plant defuser. 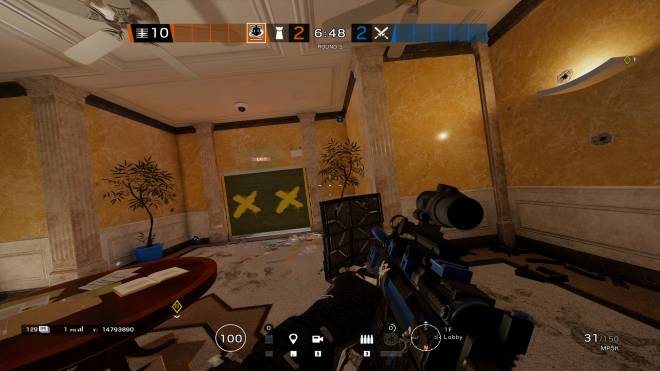 Alternatively you can play in Piano with this shield. Break the furniture by the speaker and between the flags to create additional positions to hold. Go prone behind the desk in case attackers rappel on the windows. Reinforce the hatch above as well to help keep you safe. 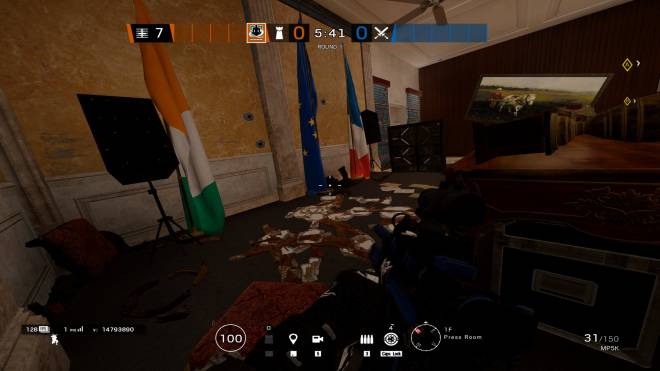 Position the shield so you can line up a pixel angle on attackers moving around by Spiral Stairs. 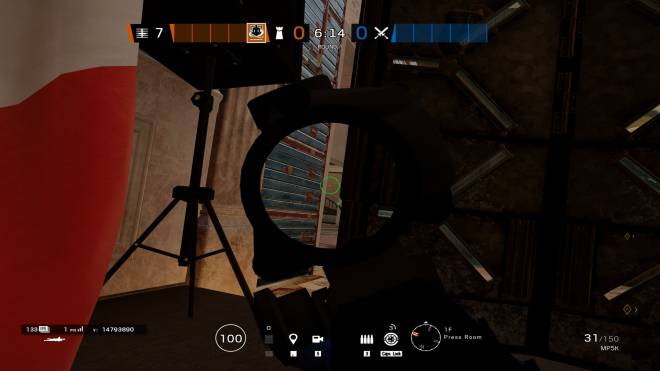 If attackers push in Yellow Stairs, or Benches, they may try to root you out of your corner with grenades or other explosives. Reinforce the panel on the right so you can place your discs there to intercept them. 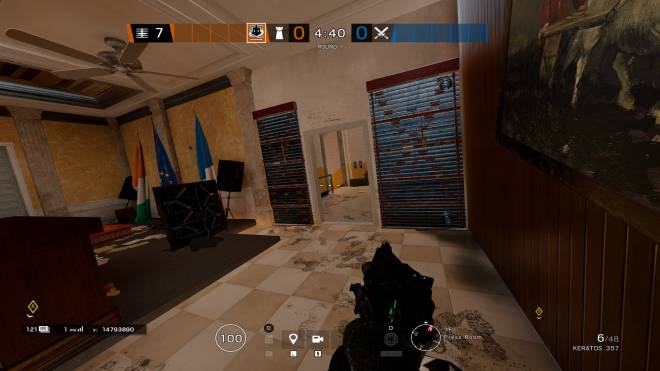 The bottom portion of the Piano and the shutters between the windows are great positions for your frisbees in case attackers try throwing grenades from the windows. 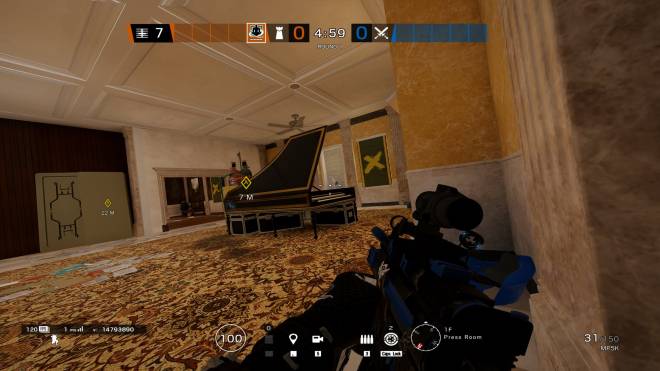 You can also position your shield closer to the windows, giving you this pocket to play while watching for attackers pushing in the front door. 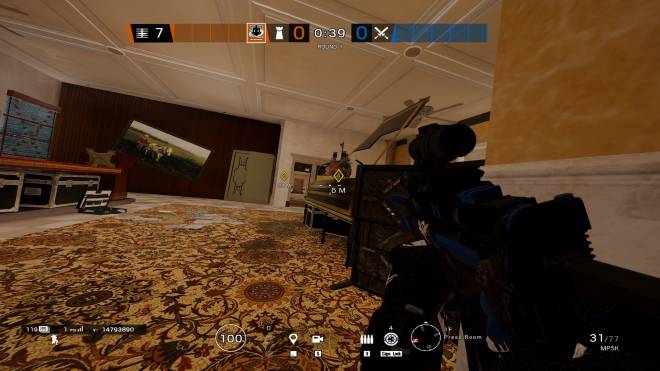 BOMB SITE 3 – Archives (B) & Tellers (1F) This split site rarely sees play, so if you have a full squad build a pocket strat for it and you can probably grab some easy rounds. It requires a coordinated team that can spread out between floors effectively, which can be difficult to achieve. You will need to maintain control over Visa stairs, and Admin hatch plus the hallway hatch by Tellers. Attackers like to push into Lobby and Consul, looking to flank Tellers. They also may push Archives from Garage and Cafe through Lockers and Red hallway.   Playing this pocket in Visa Office can be difficult, but with Wamai, the job becomes feasible. Break the plants so you have clear lines of sight. If attackers take control of Admin above you will want to consider vacating the area. 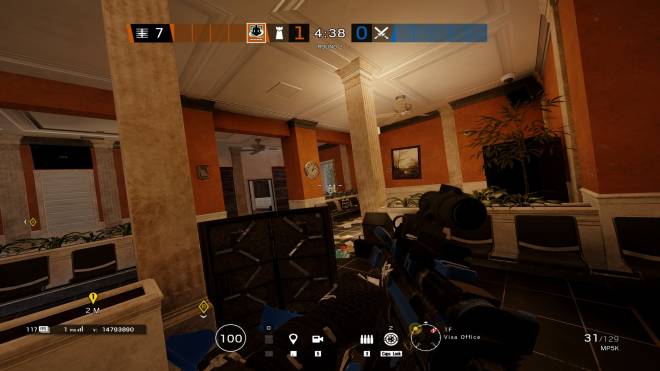 These discs are great for intercepting projectiles. Avoid placing them on ping and to the right, or they can be seen and shot from the Visa window. 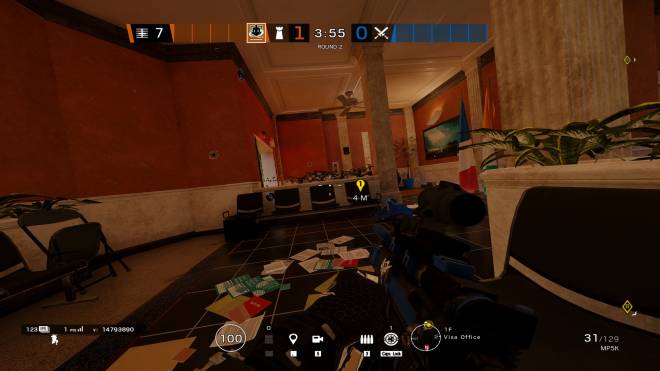 These discs are all hidden from Visa door and keep you from getting destroyed by projectiles coming in Visa window. 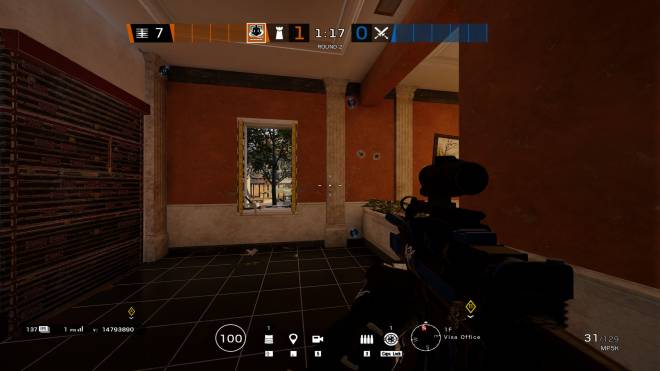 You can also use a shield here to watch the flank, with discs above the doorway protecting it. This is useful if you pop this hatch open for use as a rotate. 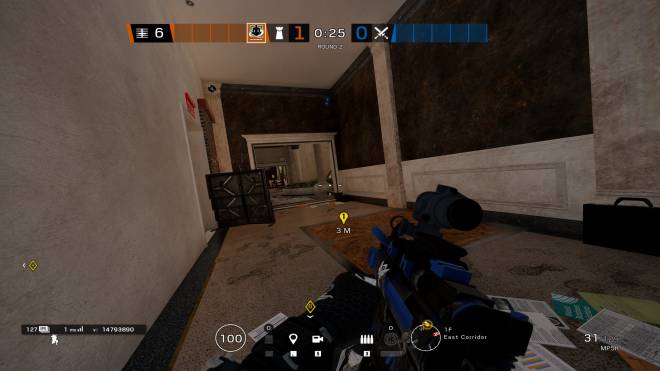 When playing in the basement, set your shield against this reinforcement to watch Security and Locker hallway. The ceiling above has a lip for your frisbees, and you can preplace one on ping as well. 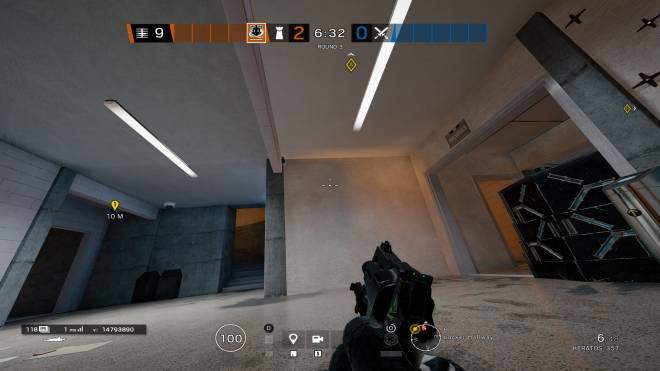 Have a teammate make a rotate on ping so you can move into Storage Room to keep an eye on Spiral. BOMB SITE 4 – Cafeteria (B) & Garage (B) This site has been popular in the past, but may become less so with the addition of Ace. Reinforce Garage wall, Lobby and Bathroom hatches , and Visa hatches as well. Someone should play Pipes to keep an eye on Yellow Stairs and Locker Hallway. Someone should play in Café to deny flanks coming through Red Hall. And a roamer should be ready to pounce on attackers should they play vertically in Piano.   Playing a shield behind White Van is a great way to stop attackers from a Garage-door focused take. They will have to go above and play vertically to properly deal with you. Otherwise, you can eat up all of their planting utility with Discs placed on the van and behind the tool boxes. 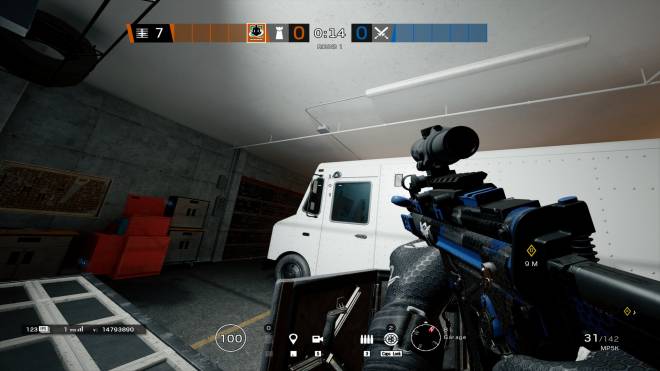 You can also play around Pipes with this shield atop the box. These discs will keep attackers from pushing in through Yellow with an onslaught of flash bangs. 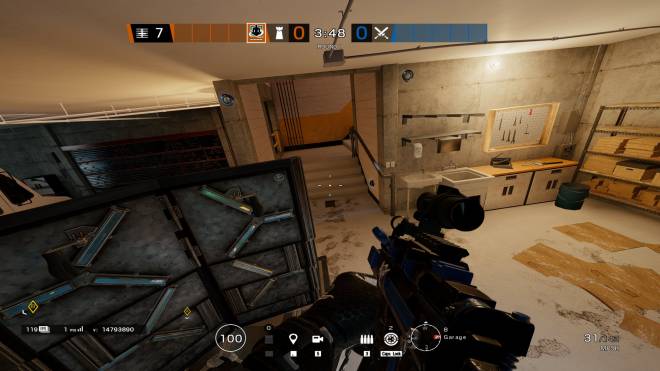 This portion of the ceiling is indestructibe so your disc is safe here and the pillar keeps it from being shot by attackers outside. This is a good one if the hatch is opened, but if that happens you may want to move! This is also a good location for an electroclaw if you have a friendly Kaid. 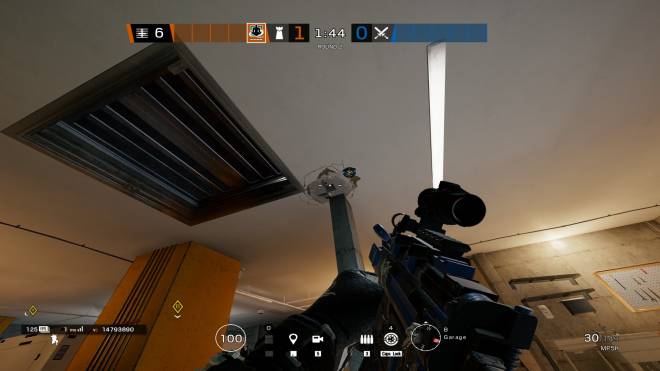 You can also choose to secure the flank, using your utility to protect this shield in Security Hall. Watch for attackers rushing into Archives and holding an angle here from ping. 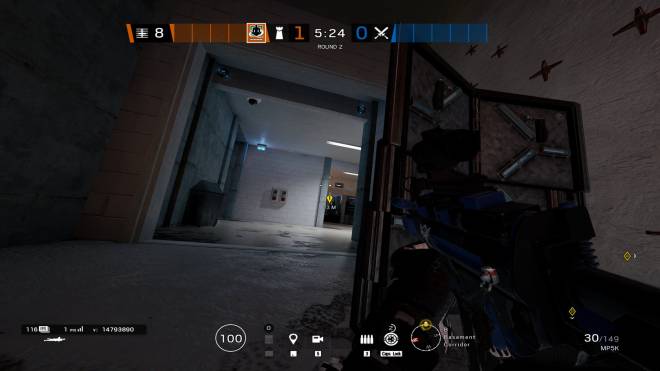 Have a teammate make a rotate through Security into Cafe so you can quickly swing around to toss your utility here in case attackers push this way instead. 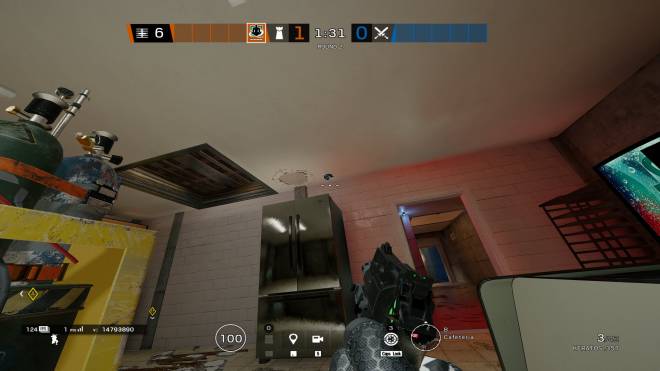