Club House consists of underground, first, and second floors. Each floor isn’t very wide so good use of defensive roamers will severely hinder the attacking team’s advances. There are many routes leading up to and down the floors like the Central Stairs and Garage or the Eastern Stairs (Blue Stairs) so roamers can pop out from anywhere.   Excluding the underground floor, every Bombsite can be scouted from the outside. Designating one of the attacking team’s members to hold an exterior angle will be effective. The rest of the team should focus on getting new angles from the inside and penetrating the building. If done right, you can completely surround the Bombsite.   Club House has two objective locations on the second floor, one on the first floor, and one on the underground floor. The first floor is by far the worst option for defenders because it is quite open to the outside and susceptible to vertical plays from the second floor. The underground floor cannot be scouted from the outside and is rather closed off which makes it the best location to defend. 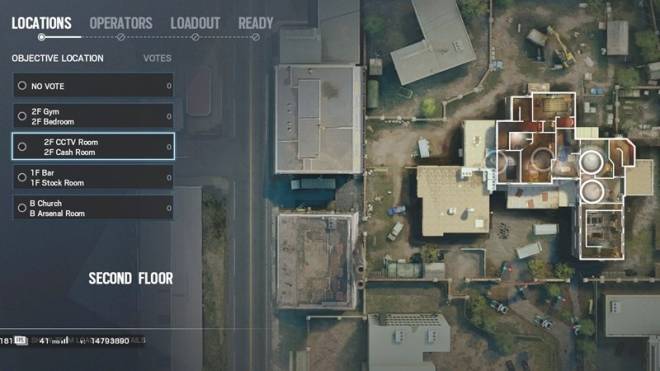 ▲Club House’s objective locations. Defenders tend to prefer the second or underground floors.   Fuze is an offensive operator that can install Cluster Charges on any breakable wall, floor, or barricade. When activated, it shoots out five small grenades into the other side of the surface. These grenades cover a lot of area which makes them very efficient for taking out enemy gadgets.   Cluster Charge will launch its sub-grenades from right to left. Using this info you can somewhat control where the grenades bounce off to. However, they do take a long time to install and deploy as well as having a distinct sound so killing someone with a Cluster Charge will be quite difficult.   Fuze can choose between a variety of guns for his primary weapon. The AK-12, which is regarded by many to be the best offensive weapon in the game is always a good choice. The 6P41 LMG has a whopping 100 capacity and can enable Fuze to stay in fights for a long time. The PMM pistol which has the damage of a magnum and the Ballistic Shield are also available. 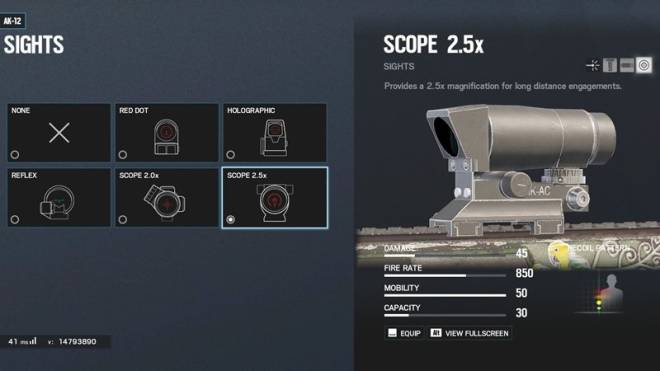 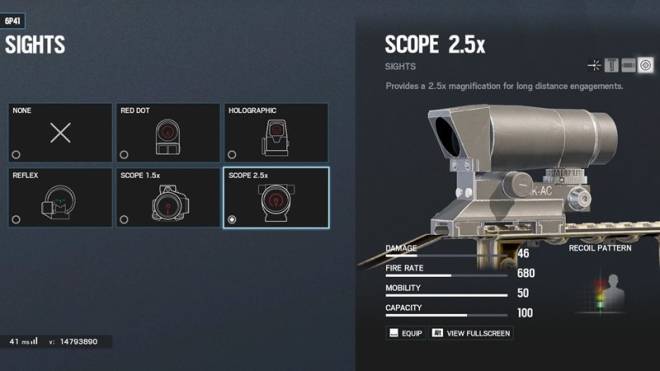 ▲The 6P41 can use the 1.5x or the 2.5x Scopes.   ▣ 2F Gym ~ 2F Bedroom   Attackers can climb onto the Central Sub-Roof and break the Gym and Bedroom windows to scout the interior. While one attacker covers this area, the rest of the team can aid the hard breacher and go through the west side Balcony to the Bedroom Hallway and breach the double wall. This is the most basic attack strategy for this map. Before breaking the windows, Fuze can deploy a Cluster Charge and destroy nearby enemy gadgets.   In response, the defending team can deploy Bandit or Kaid and use a Bandit Trick on the double wall. If you take the Gym window angle you can easily scout behind the Bedroom Hallway reinforced wall to counter this. Once your team successfully breaches the wall, your team can breach the Bathroom wall as well to further limit the defenders’ cover spots. ▲From the Central Sub-Roof you can access the Bedroom window… 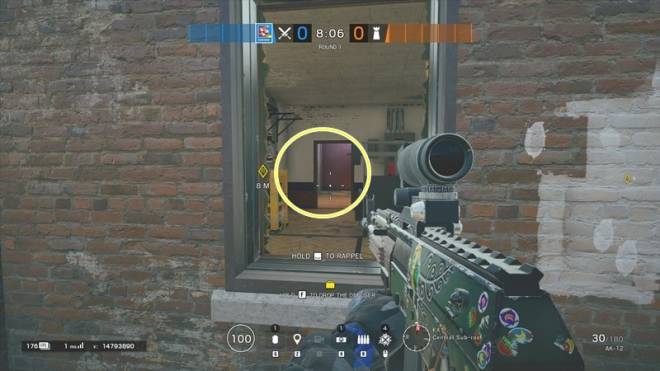 ▲and the Gym window that lets you scout inside the Bombsite. You can even scout behind the reinforced walls from this position. 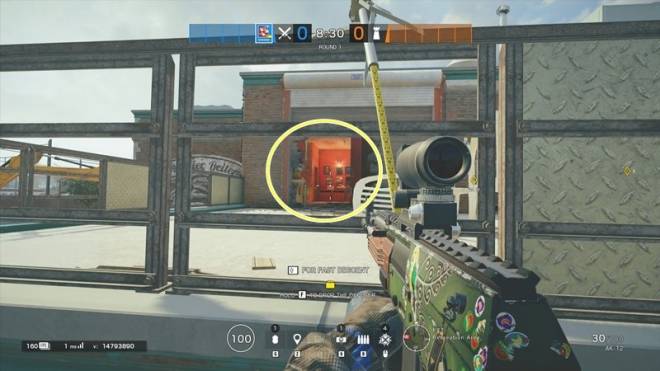 ▲If your team breaches the Bedroom Hallway walls, you can rapple here to cover the Hallway while only exposing your head. 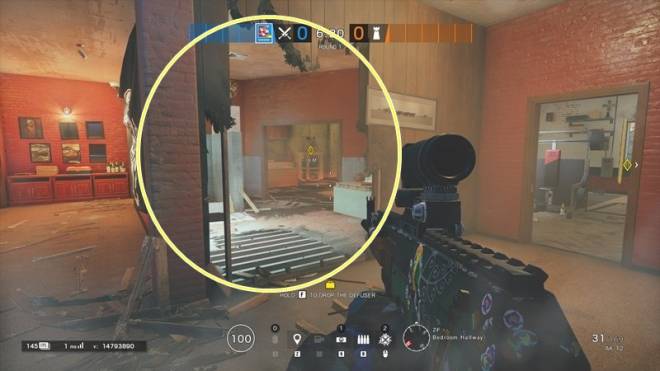 ▲If your team takes the Bedroom Hallway, breach this Bathroom wall too to completely expose the enemy team. 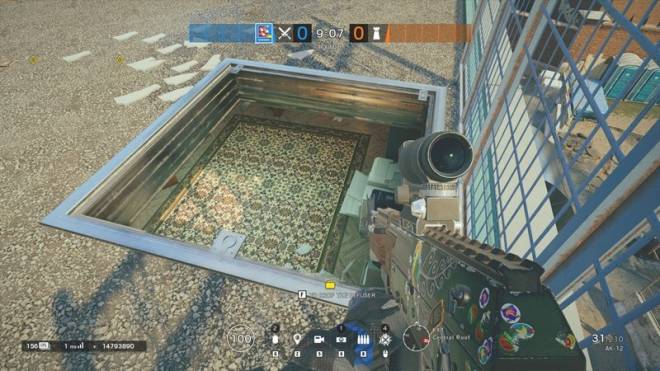 ▲You can use this roof hatch to drop down into the Logistic Office. Recommended if you need quick access to the interior.   ▣ 2F CCTV Room ~ 2F Cash Room   From the Central Sub-Roof, you can scout the Construction room located in front of the CCTV and Cash rooms. If your team has a hard breacher, you can try to go through the Eastern Sub-Roof and breach the CCTV room double wall. Having someone scout the CCTV Room from the Central Sub-Roof can help you with the breach.   The rest of your teammates can take the Garage or Eastern Stairs up or go through Construction and close in on the Bombsite. The defenders will likely make a rotation between the Cash Room and Eastern Stairs so be wary of position changes.   Besides the CCTV ROom window, there aren’t many places for Fuze to use his Cluster Charges. If you don’t find any effective spots to deploy them, don’t bother trying. Fuze’s primary weapons have superior stats so simply play as an Entry Fragger if you need to. ▲You can scout the CCTV Room from the Central Sub-Roof. 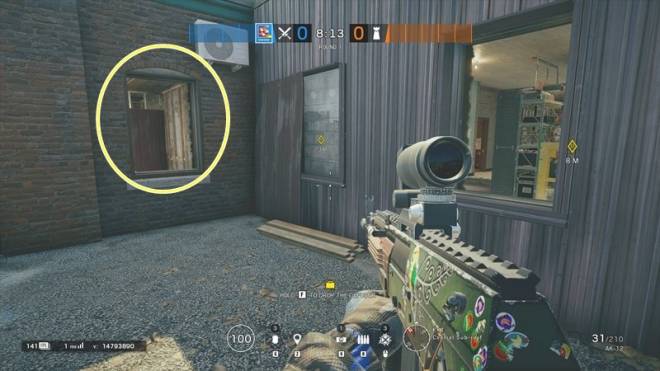 ▲Be wary of this Construction window. Defenders can catch you on the Central Sub-Roof from here. 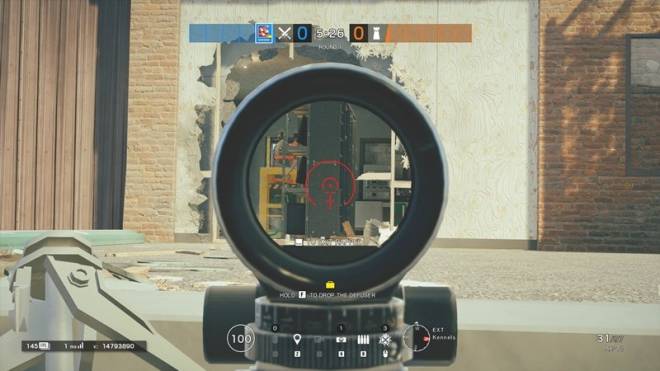 ▲If you scouted the CCTV Room, you can try to breach the Eastern Sub-Roof wall. 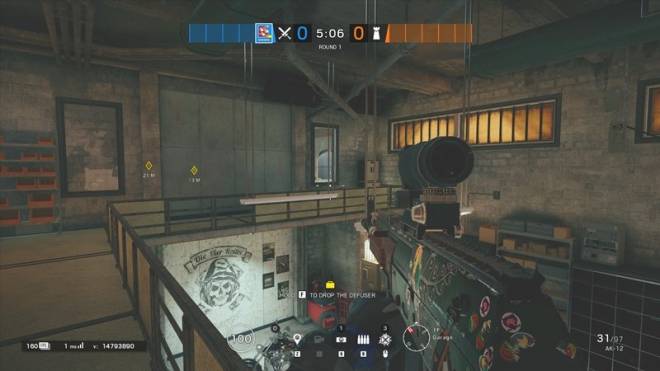 ▲The rest of your team can take the Eastern Stairs or Garage up. 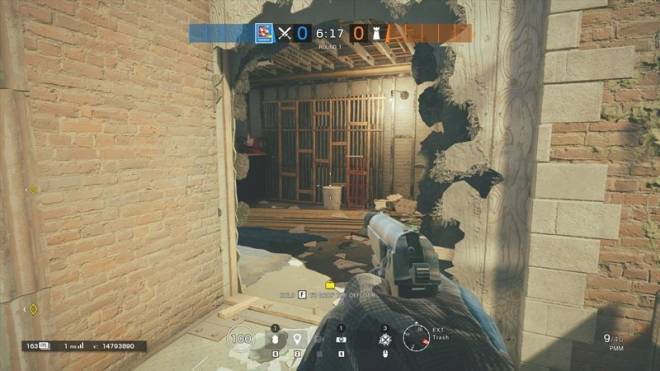 ▲You can also go up from Trash and breach this wall. However, Fuze cannot breach it alone if it is reinforced.   ▣ 1F Bar ~ 1F Stock Room   The first floor has many windows, doors, and barricades that allow you to scout the building from the outside. The Stock Room has two doors attackers can use to flank the Bombsite. Due to this, defenders tend to breach the Stage wall and defend the Stock Room from the Bar or Stage.   There are many possible attack routes you can take. Fuze can deploy his Cluster Charge on the second floor. The grenades will spread out much more if dropped from above. Try to take the second floor first. You can use the hatches in Gym and Construction to drop down as well. 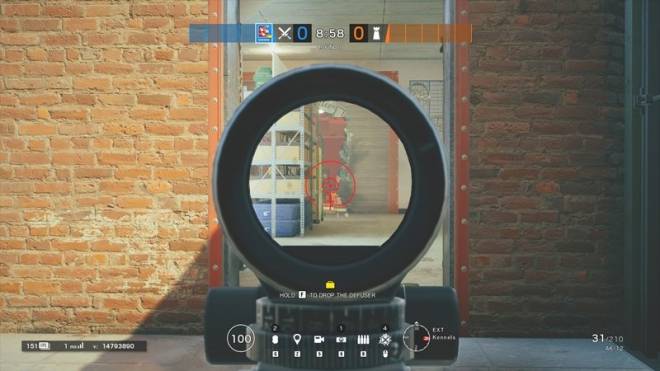 ▲Have one teammate cover the Stock Room door barricade. 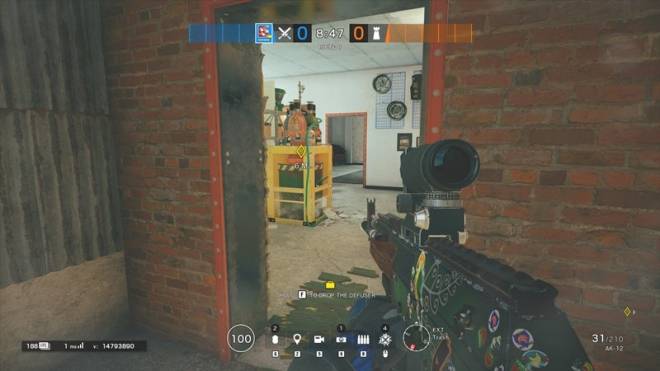 ▲Take note of the doors opposite from each other. Using both of these will leave the defenders with no places to hide. 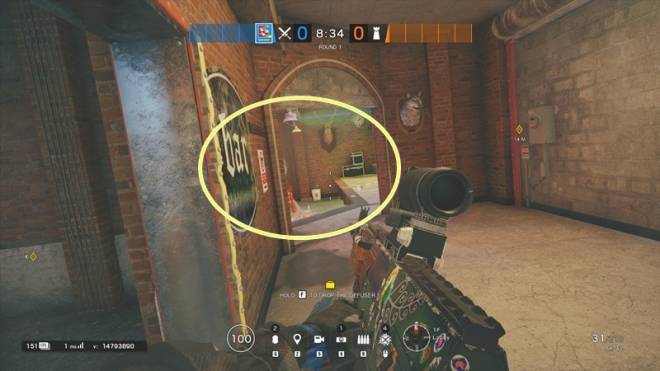 ▲The defenders will try to defend the Stock Room from the Stage. Opening the Lobby door will allow you to scout this location. 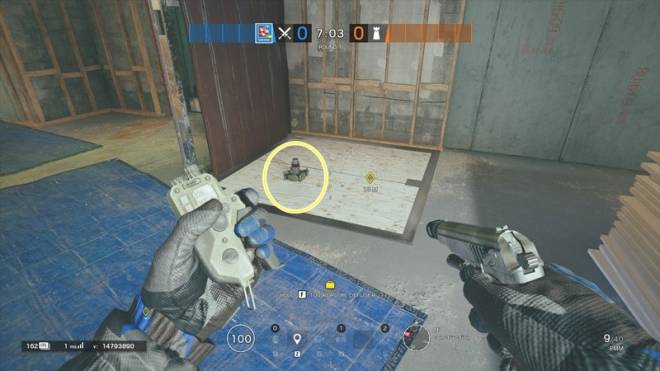 ▲You can install a cluster charge on this 2F Construction hatch but only if it isn’t reinforced. 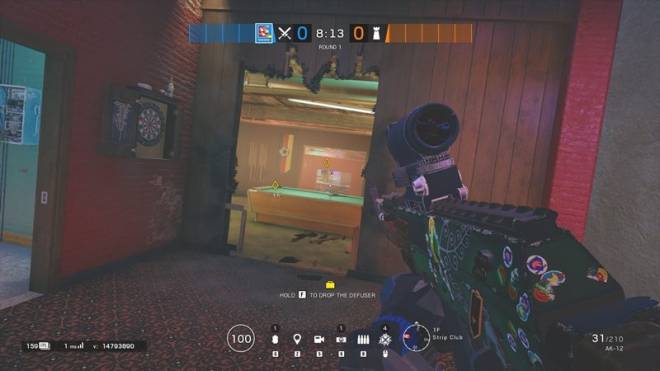 ▲You can join the hard breacher and breach the Strip Club wall to advance as well. 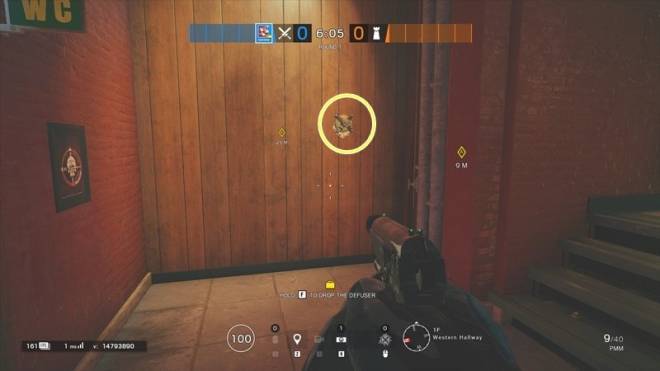 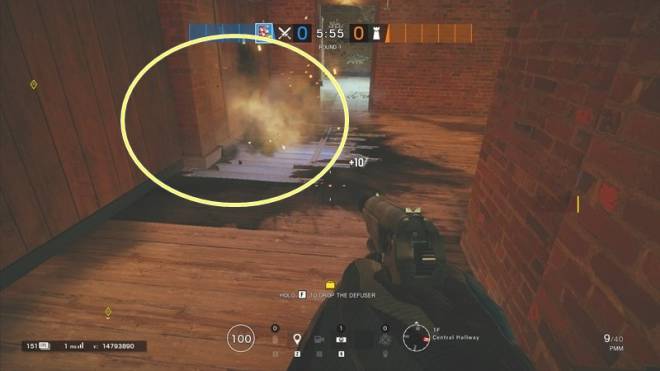 ▲you can destroy all enemy gadgets installed near the Bar entrance.   ▣ B Church ~ B Arsenal Room   There aren’t any exterior windows because of the underground placement. Attackers have no choice but to go through the interior first to reach the Bombsite. There is a high chance of being caught by defending roamers. Try to move in pairs.   There are many breakable floors on the first floor as well as many hatches that lead down to the underground making vertical plays quite effective. The only good places for Fuze to deploy his Cluster Charges are on the first floor, but defenders may be hiding near the hatches so try to ask your team for cover beforehand. 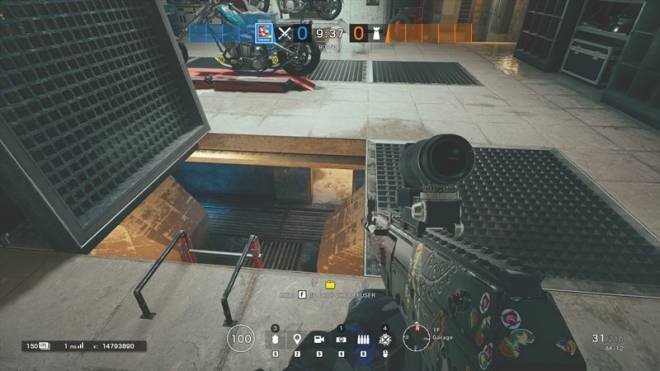 ▲The Garage ladder leads down to the underground. 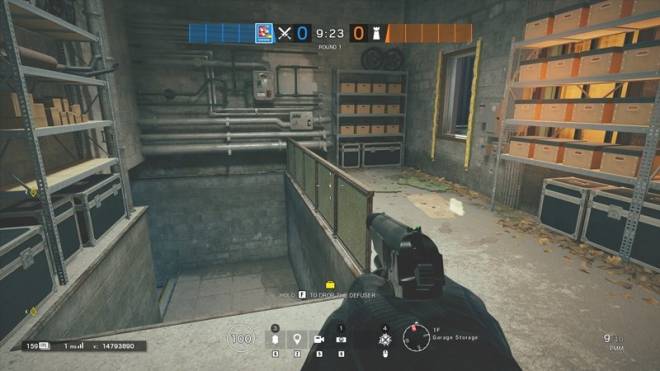 ▲You can also take the Blue Stairs from the Garage Storage. 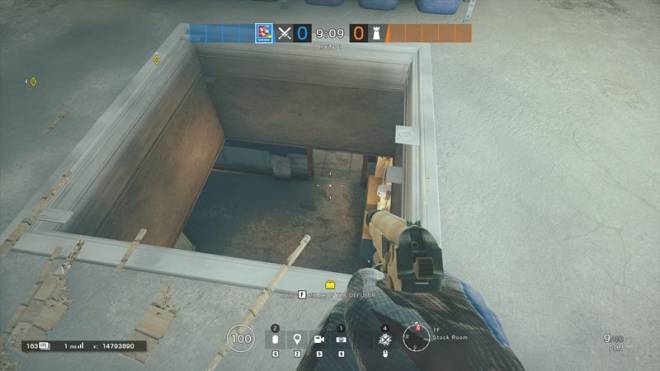 ▲The Stock Room hatch can be breached and used to drop down as well. All three routes above lead to the Utility Room. 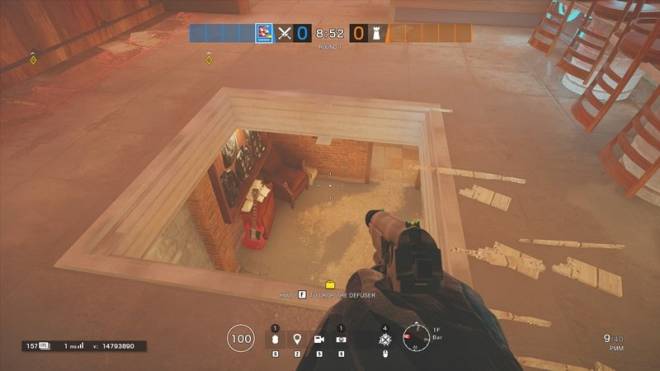 ▲If you breached the Bar hatch, you can go straight to the Church. This hatch is often reinforced however. 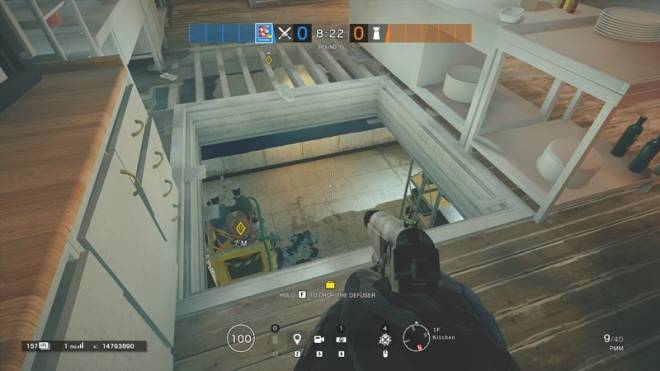 ▲The Kitchen hatch is right above the Bombsite and is often reinforced as well. 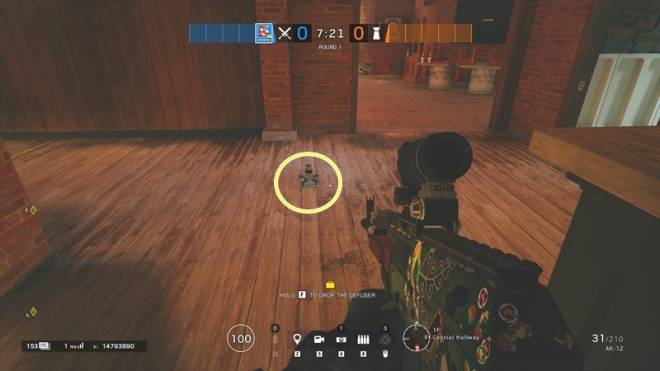 ▲If you deploy a Cluster Charge on the Kitchen or Central Hallway’s breakable floors, 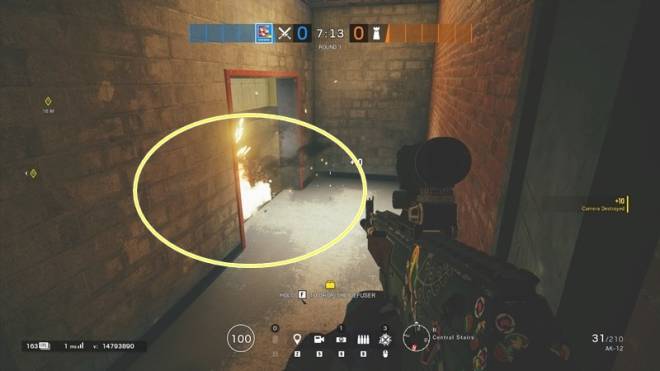 ▲you can destroy all Barbed Wire or Traps placed on routes leading down to the underground floor.