Guide to playing "Thatcher" in "Kanal"

Kanal is a map with 2 connected buildings, each with two floors. From the front, the left building has a basement and first floor. The right building has a first and second floor. There are two bridges that connect the two buildings together. There is an upper bridge, which connects the second floor of the right building with the Printer Room on the rooftop, and a lower bridge, which connects the first floors. The west building is colored blue in certain areas, while the east building is colored red. Sometimes, players will refer to each building as the Blue or Red building.   There are two objective locations in each building. In the west Blue building, there is one on the underground floor and one on the first floor. Similarly, in the east Red building, there is one on each of the first and second floors. Because of this layout, attack patterns can vary wildly each time. 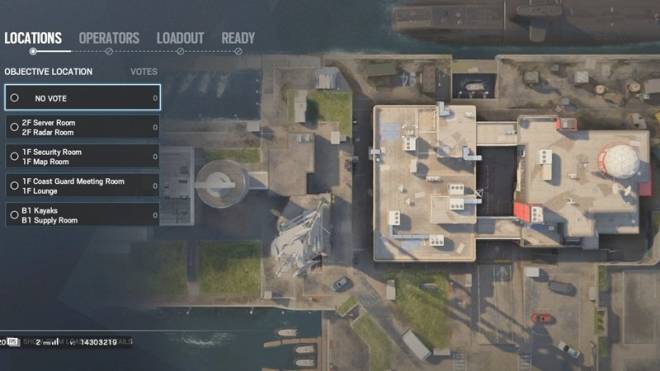 ▲Kanal’s objective locations. Two in the Blue building, two in the Red building. 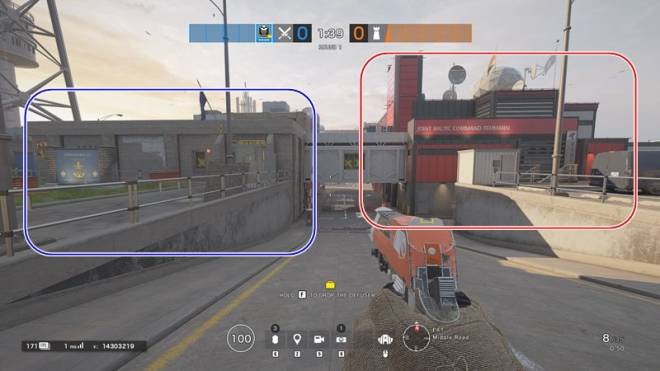 ▲The Blue and Red buildings seen from the front.   Thatcher can use EMP Grenades and negate enemy gadgets. Currently, it can completely destroy some gadgets and only disable others, but in the Operation Shadow season update, this is set to change to only being able to disable gadgets.   The EMP Grenade is able to disable enemy gadgets even from behind walls, so Thatcher primarily goes around helping his team’s hard breachers. Kanal has many areas that need to be hard breached, so Thatcher is a good pick for this map. The EMP Grenade can help with pesky defensive gadgets such as Maestro’s Evil Eye or Lesion’s GU Mine. Unlike other SAS operators, Thatcher cannot equip the SMG-11 Machine Pistol as his secondary weapon. As a compromise, Thatcher prefers to equip either the AR33 or L85A2 Assault Rifle so he can participate in long-range fights. The L85A2 with the Vertical Grip has steady recoil, while the AR33 with the Angled Grip has a high fire-rate: feel free to go with whichever you prefer. 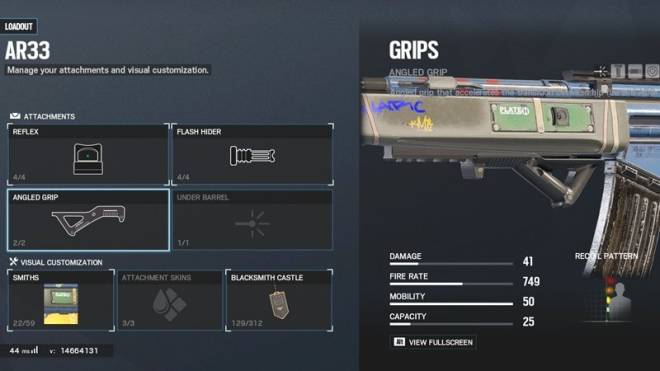 ▲The L85A2 is only compatible with the Vertical Grip, so depending on the situation pick between it and the AR33 with angled grip.   ▣ 2F Server Room ~ 2F Radar Room Outside the building, there is a Balcony attackers can use to reach the Radar Room. The Radar Room has a double wall that, if breached, can change the outcome of the round. It is advised for the attacking team to have at least one hard breacher. Thatcher can work with the hard breacher in order to breach the Radar Room walls with his EMP Grenade. There are also other routes for attack from the Balcony. You can use the Control Room Hallway window to scout a small part of the Bombsite. Climbing up to the Bridge Roof allows you to get to the Blue building and attack using the Radar Room window as well. Starting from the Blue building’s Printer Room and taking the Upper Bridge to the Red building is also an effective route. 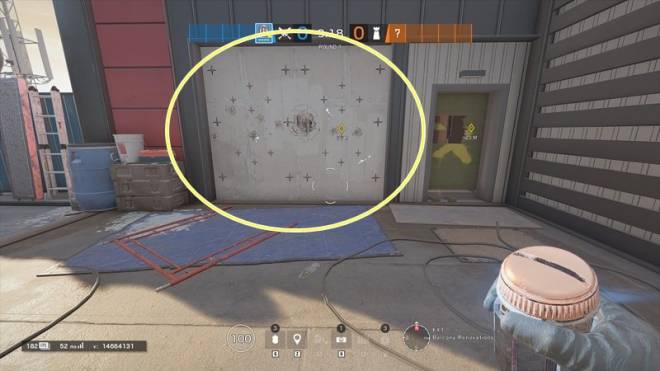 ▲The exterior wall that leads into the Radar Room. Breaching this wall will make your attack much easier. 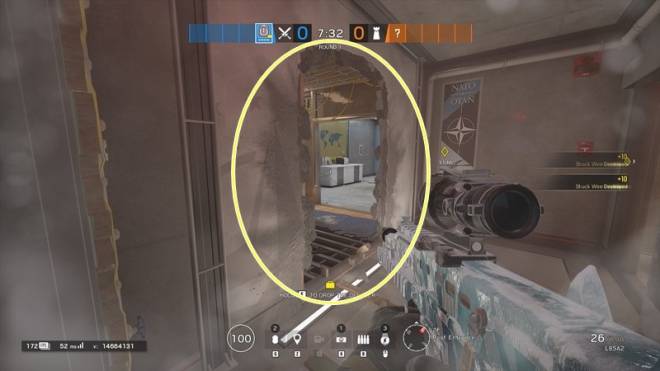 ▲You can also try to breach the barricade on the right side of the reinforced wall, but it is likely this part is also reinforced. 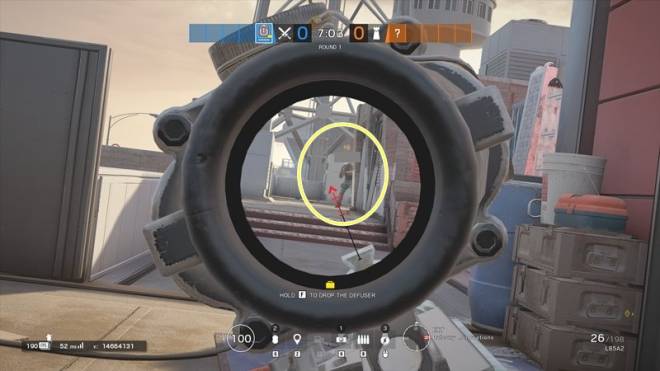 ▲There is the possibility of being ambushed while hard-breaching like shown above, so be careful. 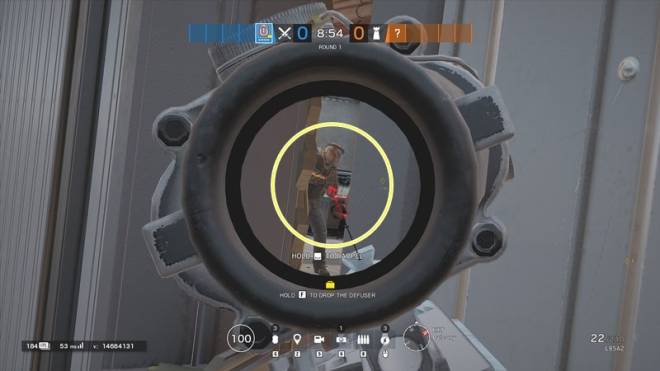 ▲You can reach the Control Room Hallway window from the Balcony to look inside the Bombsite. 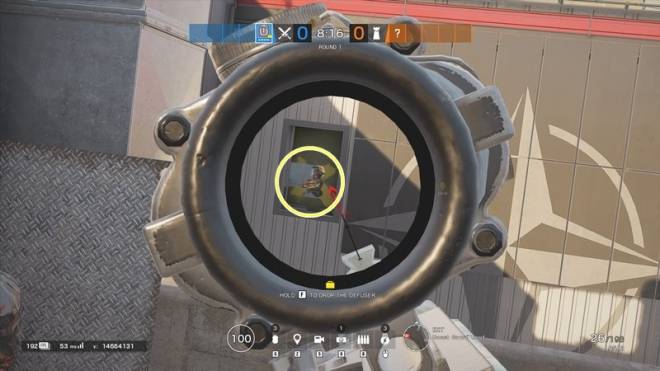 ▲You can also use the Coast Guard Roof (Blue building) to attack through the Radar Room window. 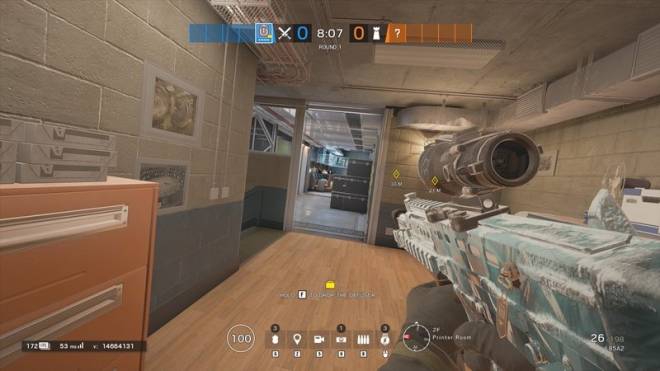 ▲From the Printer Room, you can follow the Upper Bridge to the Bombsite.   ▣ 1F Security Room ~ 1F Map Room These objective locations are placed right under the aforementioned layout. This opens up the option of a vertical play from the second floor. The Server Room and Control Room/Renovations have a total of three hatches that attackers can use to disturb the enemy from multiple angles. Thatcher does not necessarily need to help the hard breachers with the hatches unless Kaid uses his Electroclaw on them. If you have Breach Charges, you can use these to blow a hole in the floor for more angles. If you instead chose Claymore Mines, install them near staircases the defending roamers might try to use to counter the vertical play. Your team can also come through the Construction Entrance and breach the Kitchen wall or go through the Lower Bridge Parking Entrance and engage the enemy on the first floor. There are many angles attackers can use, just don’t get caught by the defending team’s roamers. 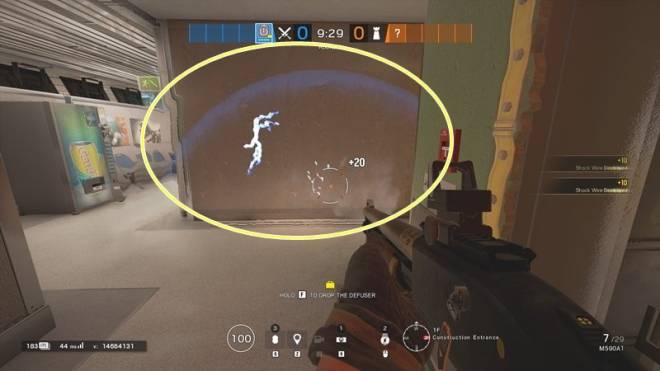 ▲From the Construction Entrance, breach this wall to enter the Kitchen, which is right next to the Bombsite. 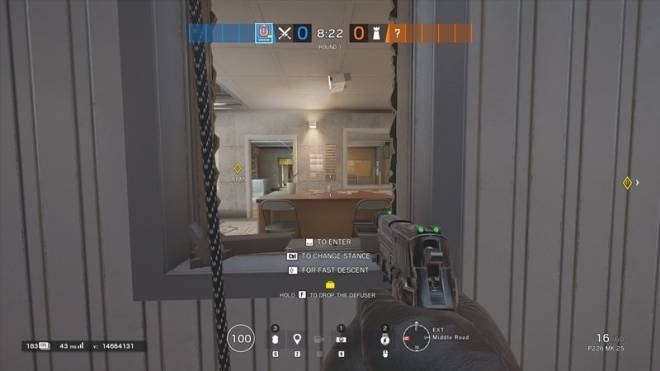 ▲You can repel between the buildings to reach the Projector Room window. 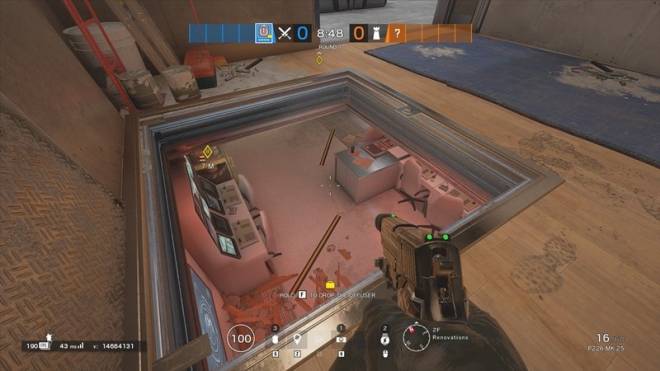 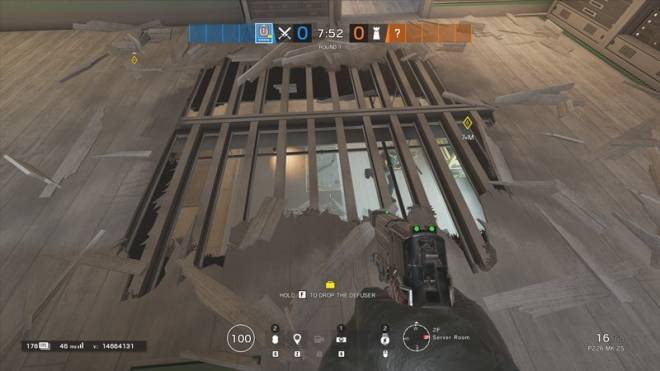 ▲Use Breach Charges to clear the floor and look down into the Bombsite.   ▣ 1F Coast Guard Meeting Room ~ 1F Lounge Moving on to the Blue building, these Bombsites are on the first floor. The Printer Room on the rooftop can be used to make a vertical play to the Lounge. Starting from this rooftop area is a good way to start your advance. However, the defenders may be expecting this, so scout the area with your drones first. If you take the Blue stairs down from the Printer Room, there is a double wall on the left side that leads to the Lounge. Breaching this wall and using the Blue Stairs as cover can be an effective attack. Of course, it may be guarded with a Shock Wire or Electroclaw, so use your EMP Grenades to ensure a safe breach. It is also a good idea to attack the Coast Guard Meeting Room from the opposite Reception area. Here, you can breach the Archives or Radio Room Hallway walls to create new angles. However, it is very close to the Bombsite, so be careful of defending roamers. 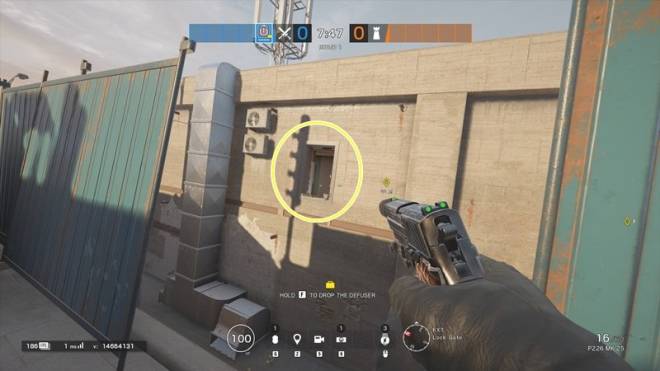 ▲There are also many exterior windows you can use to check the building interior. 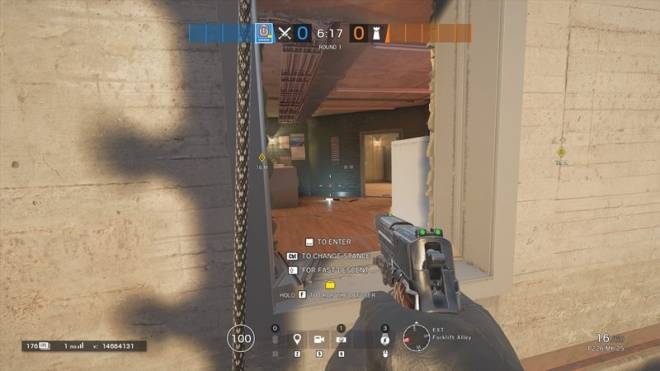 ▲Proper usage of these windows can allow you to catch the opposing defenders moving to and from Bombsites. 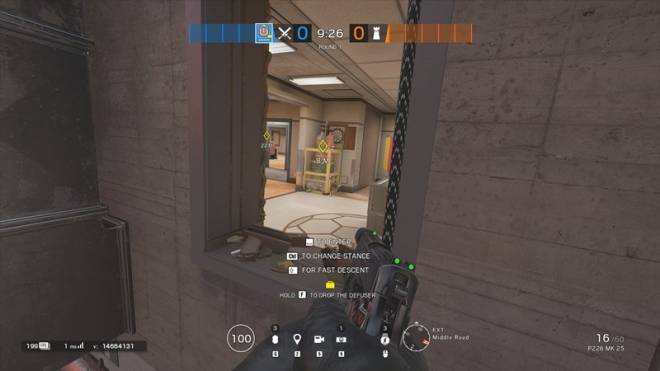 ▲There is also a window on the opposite side of the Lounge, but your movement here will be restricted which limits the angles you can take. 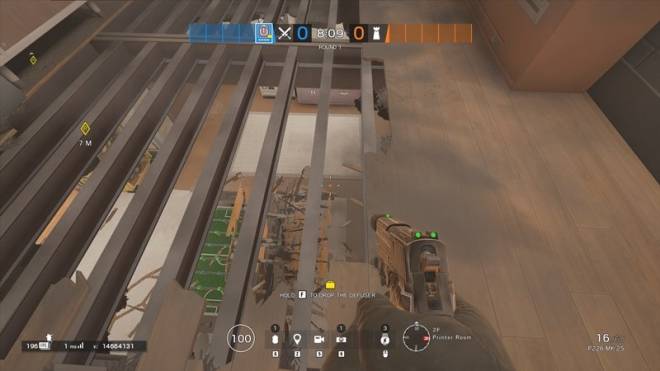 ▲You can try a vertical play from the Printer Room to the Lounge. 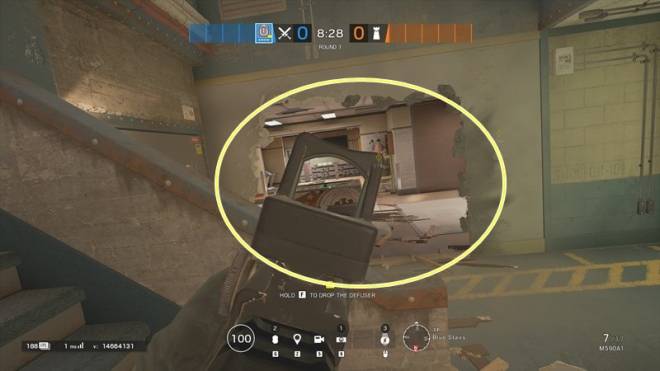 ▲If you breach this wall right next to the Blue Stairs, the Lounge will be completely open. 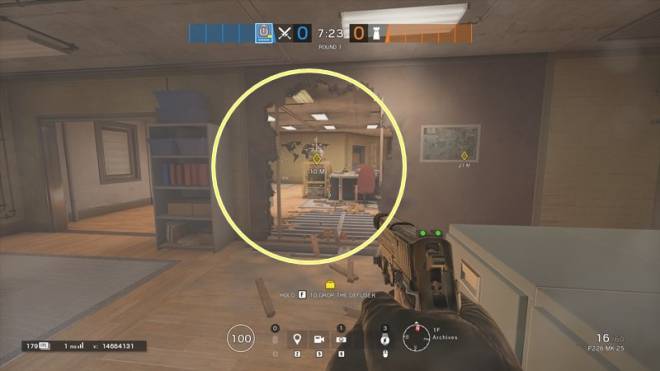 ▲If you came through Reception, you can breach the Archives wall.... 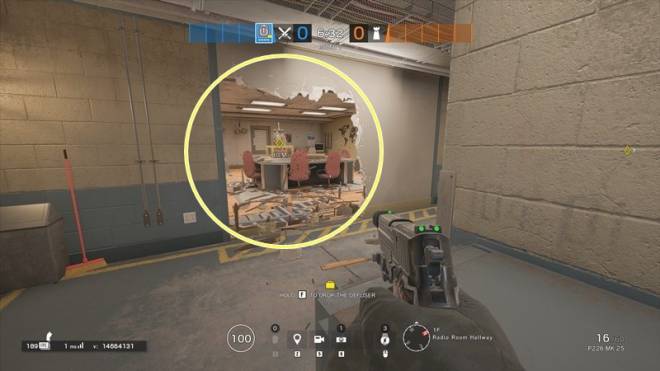 ▲or breach the Radio Room Hallway wall and create new angles. It is a bit dangerous but worth trying.   ▣ B1 Kayaks ~ B1 Supply Room Both Bombsites reside under the first floor Coast Guard Meeting Room, so a vertical play from here is super effective. There is also a hatch here that leads to the Supply Room, so you can even drop down if you wish. The defending roamers will be guarding this, so clear them out with a numbers advantage. If you take the Basement Stairs down from the building’s front, you will reach a door that leads to the Supply Room Corridor and Bathroom. To the left of this door lies a reinforced wall that leads to the Pipes. Breaching this wall is also a good attack route. However, it is likely defenders will be waiting for you in the Bathroom, so breaching won’t be easy. Another good route is starting from the opposite side Diving Alcove and going through the Diving Room or Locker Room area. If you take this route, you can go through the Locker Room to catch the defenders waiting in the Bathroom. 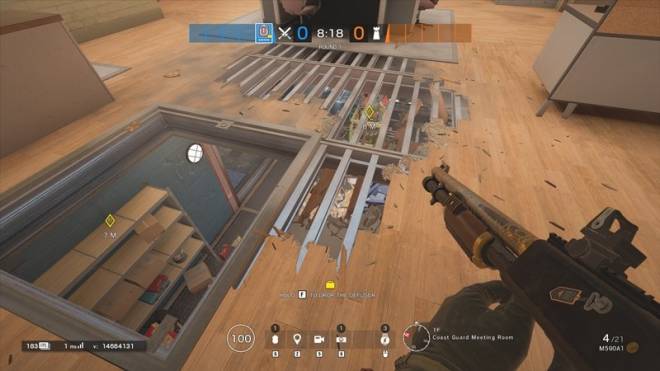 ▲Starting from the 1F Coast Guard Meeting Room to make a vertical play is an effective strategy. 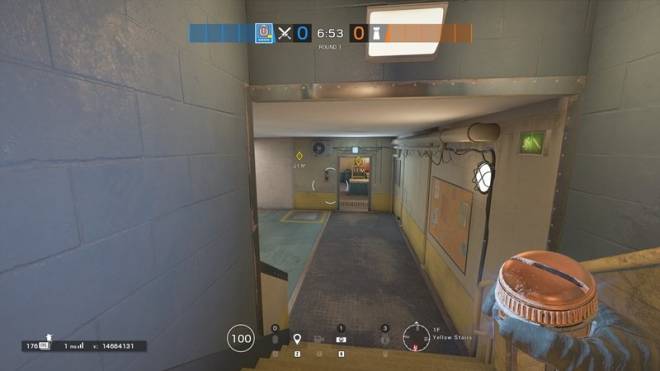 ▲You can also take the stairs down from the first floor. 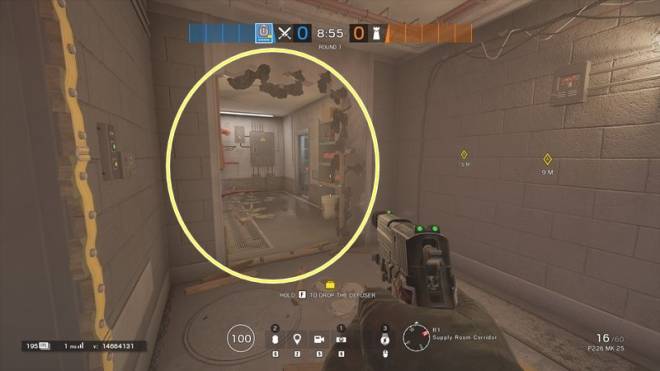 ▲Taking the Basement Stairs down and breaking the barricade will grant you access to a wall that leads to the Bombsite. 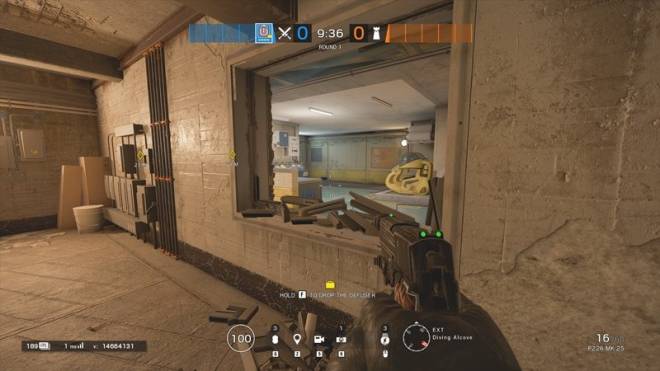 ▲After breaking the Diving Alcove window that leads to the Diving Room, you can attack the Kayaks… 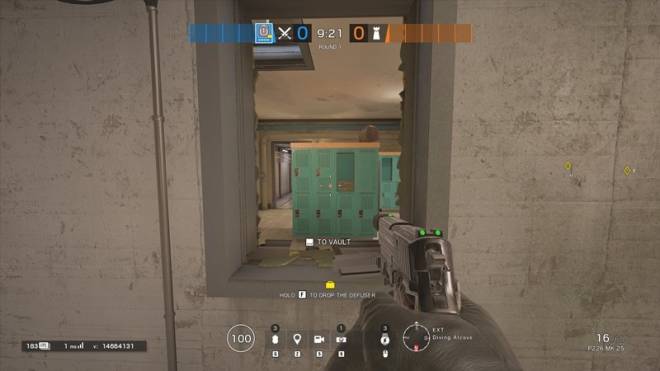 ▲or go through the Locker Room and clear camping defenders in the Bathroom.