A guide to using Ying on Coastline

■ Using Ying on Coastline Coastline a small sized map with 2 floors of elevation. This map features a lot of small to medium sized rooms, many of which have entrances leading directly outside. This gives attackers direct sight lines into the objectives in many cases, however it can also leave them vulnerable to being rushed out on or peaked from windows.   Ying is a two speed, two armor attacking. Her gadget is the Candela device, which is a hybrid between a super-powered flash grenade and a non-lethal version of Fuze’s gadget. The Candela can either be thrown, or it can be mounted to soft cover and detonated against the surface. Ying cannot flash herself when using these Candela devices.   Ying has a choice of two primary weapons. The first is the T-95 LSW Light Machine Gun. This LMG boasts high damage a high damage output with 81 bullets per clip. It has a relatively low rate of fire with a higher level of recoil that reduces its effectiveness. To get more out of this weapon, you can equip it with an ACOG scope, to engage enemies at a long range.   The other primary weapon available to Ying is the SIX12 shotgun. This is a fun weapon to use if you are a fan of using shotguns, however it’s effectiveness can be quite limited when playing at a higher level. Don’t let this fact dissuade you from choosing this weapon if you are just looking to have some fun.   Ying’s only choice of sidearm is the Q-929, which is a middling semi-automatic pistol without any notable features, though it’s a solid backup weapon. ▲ The sites you will have to attack on Coastline.   ▶ In case, the site is located at '2F Hookah Lounge ~ 2F Billiards Room' Billiards Room, Bomb Site A, is an L-shaped room with some cover in the form of a bar at the back of the room. This site can become quite exposed due to it featuring a large window in the center, as well as a door which leads to an adjacent room, Aquarium, that can be directly accessed from outside. If you and your teammates can gain control of the Aquarium area, you have a strong chance of winning the round. The final door to this site looks down a hallway towards the stairs. As an attacker, if you successfully maintain control of this hallway, without getting flanked by any roaming defenders, you will be able to access both bomb sites. 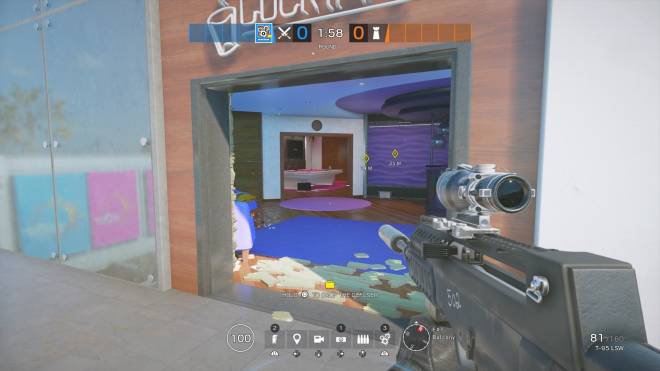 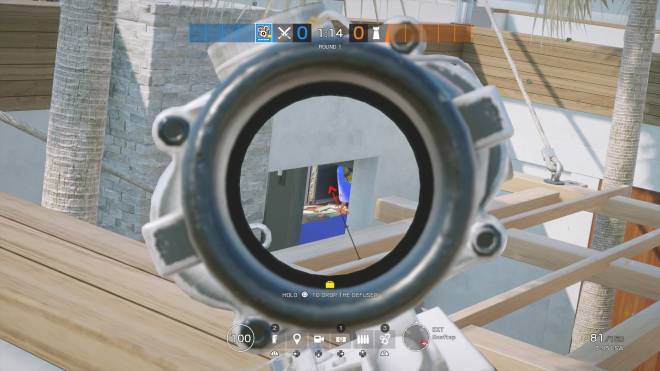 ▲ You can use the rooftop to engage defenders at various angles. 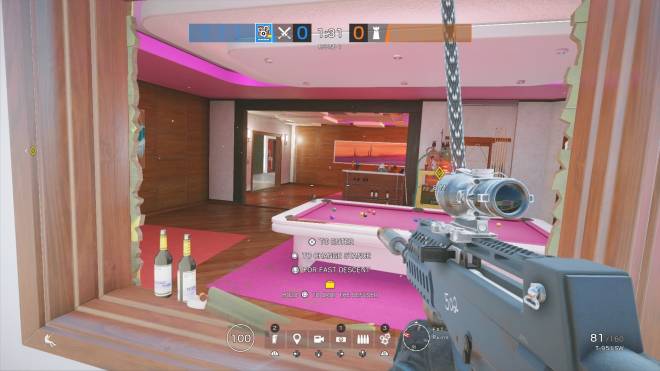 ▲ This large window allows you to see Bomb Site A in its entirety. Beware of enemies taking cover behind the bar. 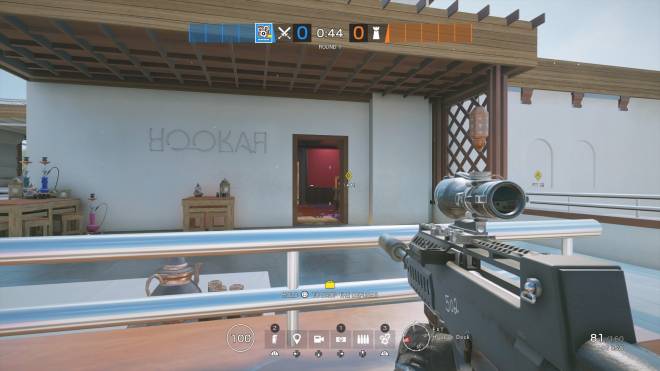 ▲ You can engage enemies through this door from the relative safety of the Hookah Deck.     The sites are separated by a breakable wall. Attackers can open up this wall to expose any defenders.   Hookah Lounge, Bomb Site B, is a small room with three access points. It has a door leading directly outside from which attackers can use to stand and engage any defenders inside, or perhaps even rush into the objective. There is also a window at a 90-degree angle to this door which means you can have a full view of the room if there is one attacker positioned at each of these entry points. The final point of entry is the door that leads out to the hallway and to the top of the stairs. Attackers should make use of this staircase as once you reach the top you will have a view of the hallway which connects the sites. ▲ You can see how the Hallway connects directly to both bomb sites.   ▶ In case, the site is located at '2F Penthouse ~ 2F Theater' Theater, Bomb Site A, is a small room offering little cover. It has one door leading to the main hallway outside of which is the main point of entry into this room. The other door in this site leads directly to Bomb Site B. The wall at the back of this site faces the stairwell, if opened, will completely expose any defenders anchoring inside. However, expect this wall to be reinforced. 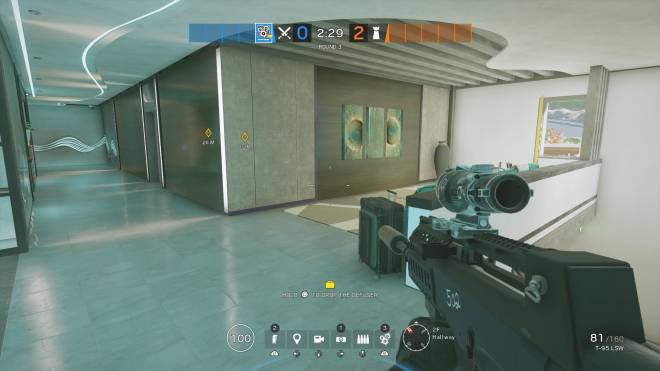 ▲ This window provides a great view of Bomb Site B, however hanging here is risky.   Theater, Bomb Site B, is a larger room with many more areas that can be breached. There is a large window from which attackers can rappel and directly engage any opponents inside. There are also two doors to be mindful of. The first leads to a bathroom. This bathroom is relevant as it has a hatch leading to the roof. As an attacker, you can rappel to the rooftop, open this hatch, and apply pressure from above. This hatch cannot be reinforced by defenders as they can not access the rooftop. 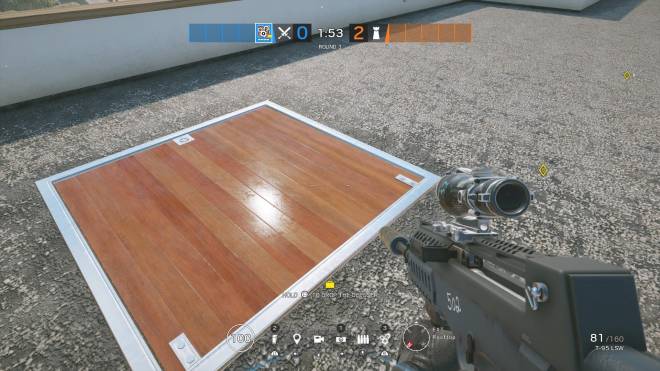 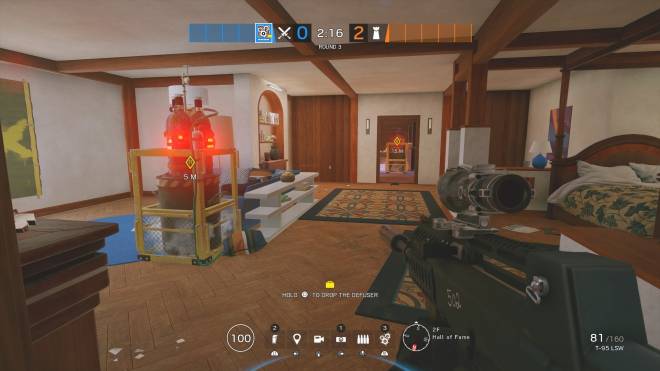 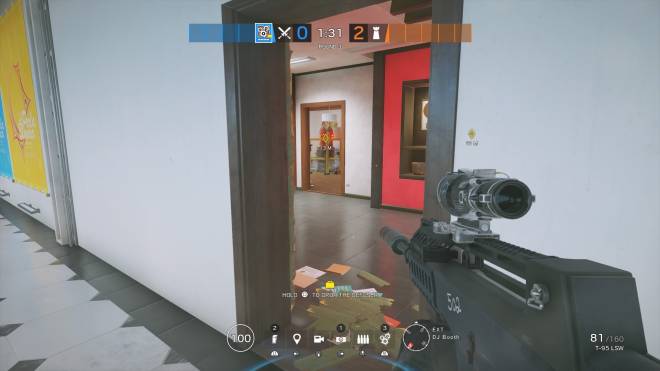 ▲ From this outdoor area you can see all the way into the bomb site.   ▶ In case, the site is located at '1F Kitchen~ 1F Service Entrance' Kitchen, Bomb Site A, is a large room with two main points of entry. The first is a large window which opens directly to outside. As an attacker you should hold this angle or quickly peak this window. The other main entry point is a door, which is at a 90 degree angle to the window mentioned above. Once you and your teammates gain control of this doorway you will have a line of sight of covering both bomb sites, making a successful defense exceedingly difficult for the other team.     Service Entrance, Bomb Site B, is a long room with little to no cover. At the end of the room is a door leading directly outside. As an attacker this will serve as your main entry point. Open this door and engage the defenders at range using your superior long range assault rifles. The Toilets adjacent to this room provide some cover for defenders, so be cautious when entering through this door. 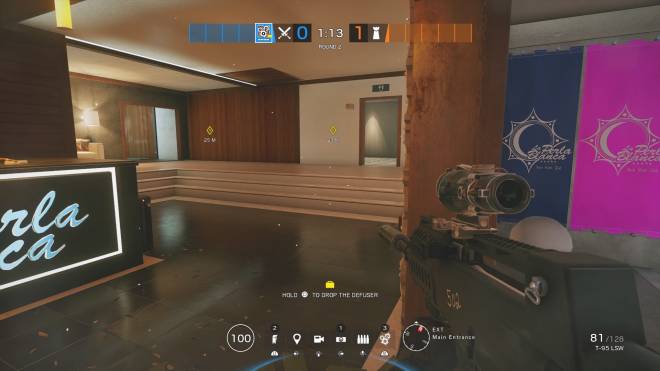 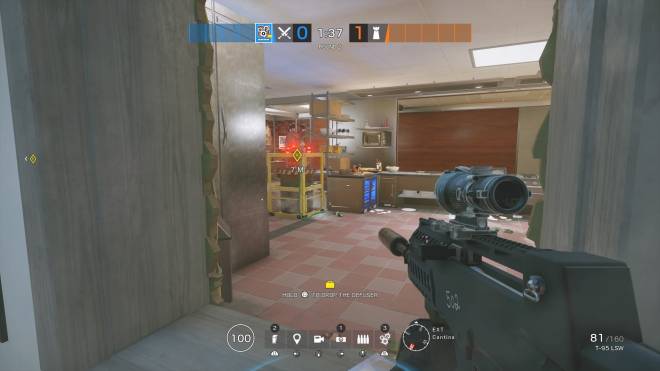 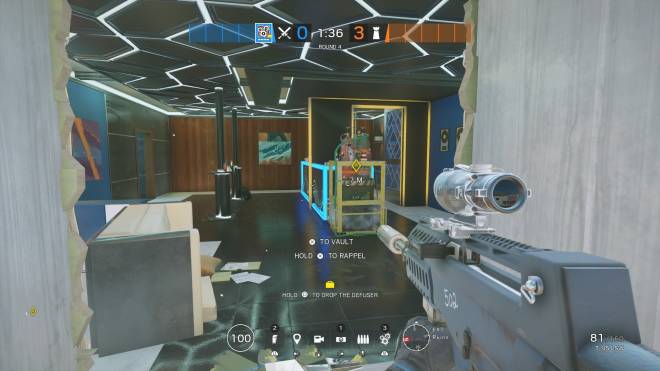 ▲ This window provides a great view of Bomb Site A. 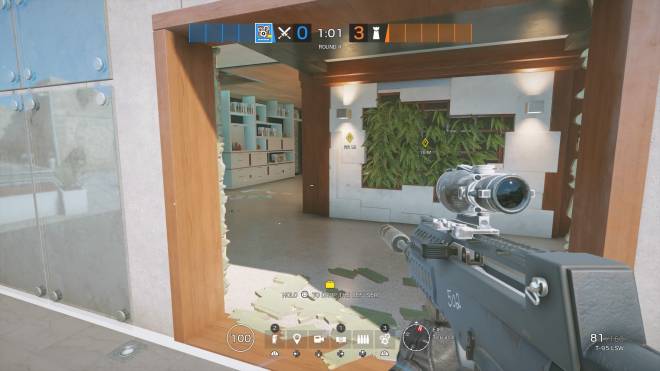 ▲ This Terrace is not far from the bomb sites. Defenders will be expecting you and your teammates to come through this area.   Sunrise Bar, Bomb Site B, is a small room with a doorway leading to an entrance to the building. You and your teammates can easily access this door as it is close to a nearby spawn point. Once opened this door provides a great view into the room which you can use to pick off any defenders who may peek their heads out. This site also features a window on the opposite side of the room which can be quite dangerous to rappel on. The final door in this room looks out onto the main stairs of which you can use as another point of attack. 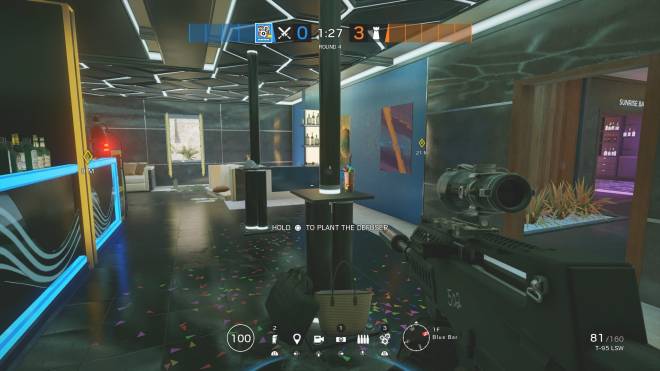 ▲ How the bomb sites connect to one another.   The fact that these bomb sites can be accessed so easily from outside make it very difficult for the other team to defend both of these bomb sites effectively. Expect to engage in some what of a “peek off” with the defenders as you battle over the entrances to the building. ▲ This door leads directly to Bomb Site B. 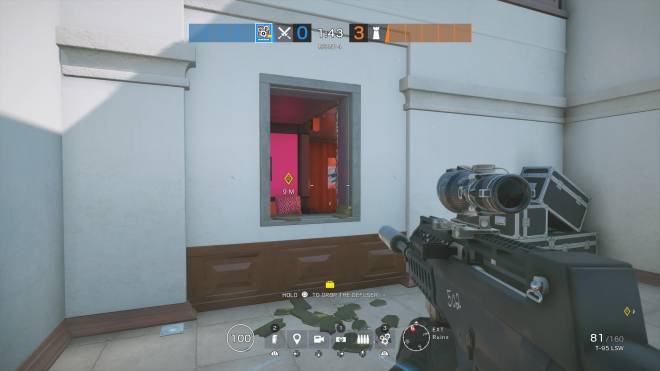