A guide to using Ying on Border

■ Using Ying on Border Border is a small to medium sized map with 2 floors of elevation. This map features an almost excessive number of breakable walls, and lots of small interconnected rooms, which can make it a difficult map to traverse for both attackers and defenders alike. Many of the bomb sites feature breakable walls or entrances leading directly outside, which can make things slightly easier for attackers.   Ying is a two speed, two armor attacking. Her gadget is the Candela device, which is a hybrid between a super-powered flash grenade and a non-lethal version of Fuze’s gadget. The Candela can either be thrown, or it can be mounted to soft cover and detonated against the surface. Ying cannot flash herself when using these Candela devices.   Ying has a choice of two primary weapons. The first is the T-95 LSW Light Machine Gun. This LMG boasts high damage a high damage output with 81 bullets per clip. It has a relatively low rate of fire with a higher level of recoil that reduces its effectiveness. To get more out of this weapon, you can equip it with an ACOG scope, to engage enemies at a long range.   The other primary weapon available to Ying is the SIX12 shotgun. This is a fun weapon to use if you are a fan of using shotguns, however it’s effectiveness can be quite limited when playing at a higher level. Don’t let this fact dissuade you from choosing this weapon if you are just looking to have some fun.   Ying’s only choice of sidearm is the Q-929, which is a middling semi-automatic pistol without any notable features, though it’s a solid backup weapon. 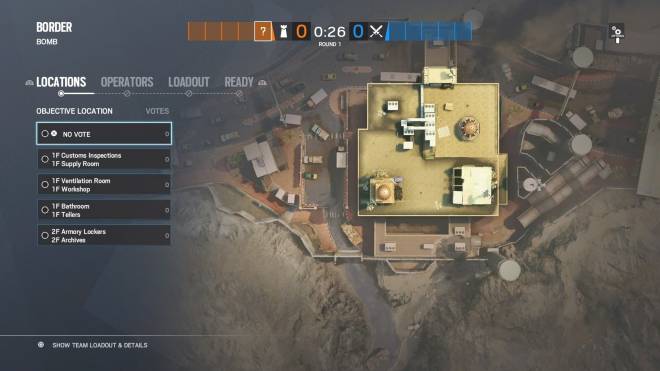 ▲ The sites you will have to attack on Border.   ▶ In case, the site is located at '1F Customs Inspections ~ 1F Supply Room' The Supply Room, Bomb Site A, is a long narrow room with one window acting as the main point of entry. This window leads directly outside and attackers can use this to their advantage. However be cautious, as defenders may be peaking at this window. A Rook or Doc peaking this window can make life very difficult for attackers. Supply Room is separated from Bomb Site B by a door and three breakable walls which can be destroyed to create additional angles. 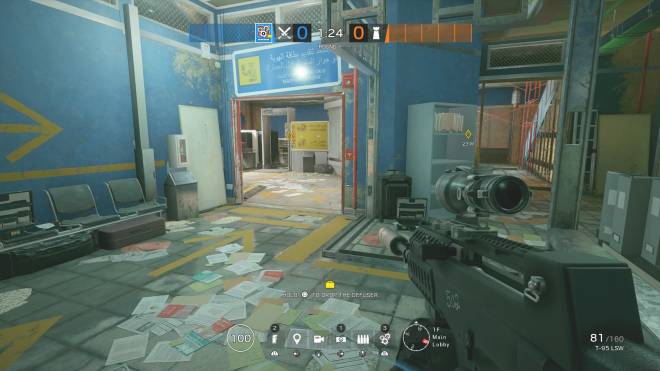 ▲ The view of Bomb Site B from the Main Lobby.   Another room that must be mentioned when discussing this site is the Detention Room. This has a breakable wall that leads directly to outside. This should be opened up as early as possible. If this wall is breached early in the round it will make life very difficult for the defenders. 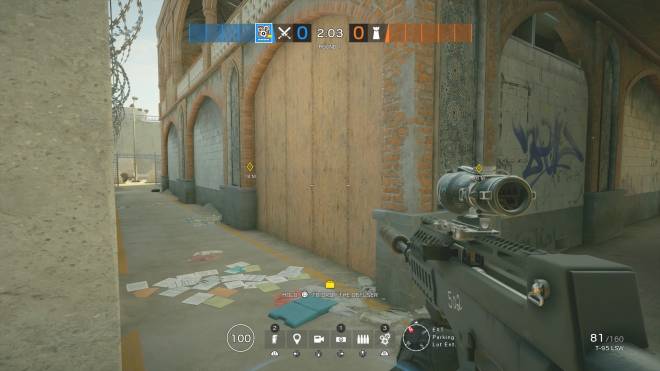 ▲ Attackers can open this hatch above the bomb sites by going to the floor above. Once opened use your Candela gadgets to blind enemies that may be in the bomb site.     ▶ In case, the site is located at '1F Ventilation Room ~ 1F Workshop' Workshop, Bomb Site A, is a large room with two doors. One door leads out to a hallway, the other leads out to a main entrance for attackers that could prove deadly for defenders trying to peak. This site provides lots of excellent cover and should allow defenders to create useful angles of attack. Bomb Site A is definitely the more difficult site to attack, Bomb Site B is very exposed in comparison. 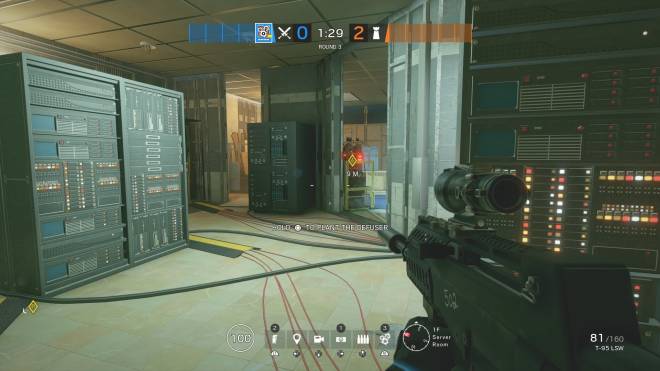 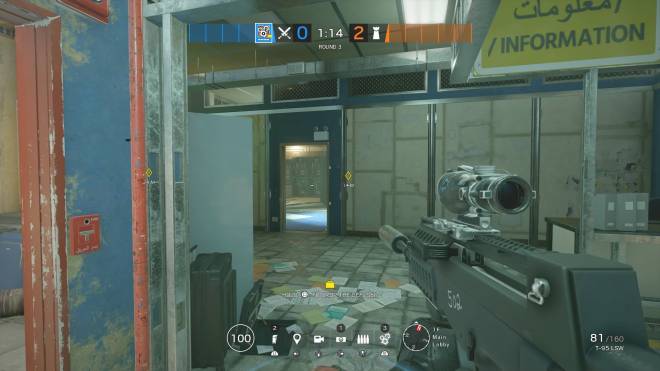 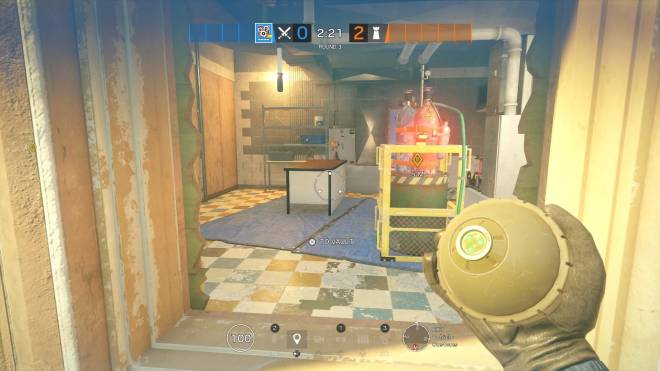 ▲ Opening this main entrance provides you and your teammates an excellent view of the bomb sites. 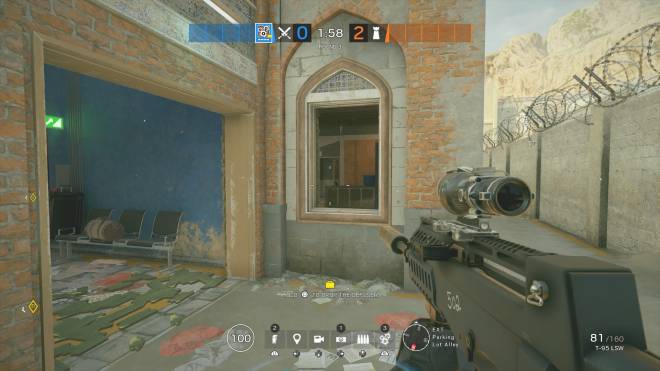 ▲ Be cautious of defenders peaking through this window.   ▶ In case, the site is located at '1F Bathroom ~ 1F Tellers' Bathroom, Bomb Site A, is a small room with 1 door but three breakable walls. This site provides decent full body cover in the form of shower stalls.. Breaching one of the walls in Bomb Site A will completely expose any defenders unfortunate enough to be anchoring in this position. 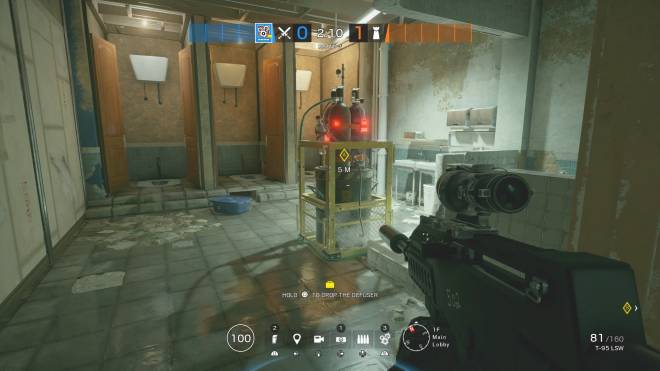 ▲ Bomb Site A, is small but unfortunately provides good cover for defenders. 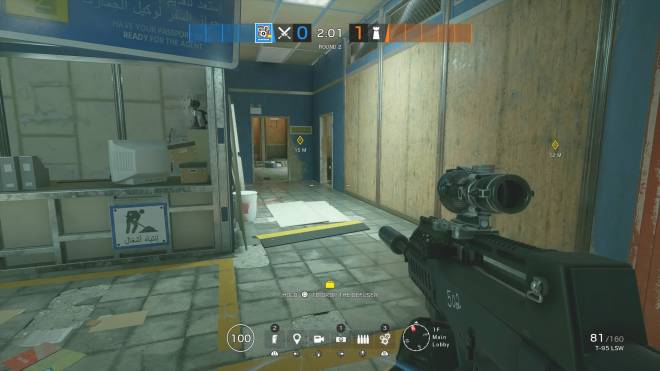 ▲ How the bomb sites connect to one another.   Tellers, Bomb Site B, is quite exposed. It has one window leading outside. Two windows leading to the larger, more expansive, Waiting Room, and also a door. This is a great bomb site to attack. The breakable wall in this room leads directly outside. By breaching this wall, and breaking open the nearby window, attackers will have a full, unobstructed view into Bomb Site B. 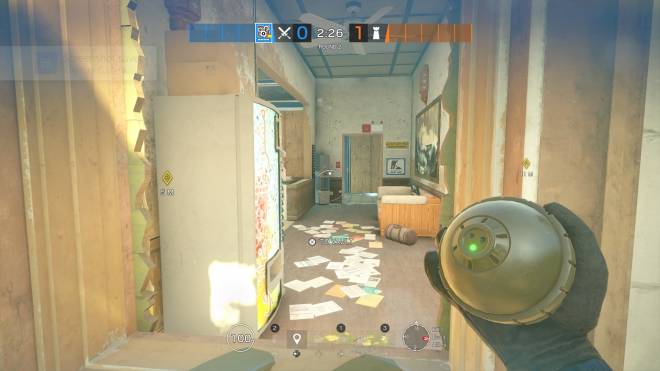 ▲ The view of Bomb Site B from the Waiting Room.   ▶ In case, the site is located at '1F Armory Lockers ~ 1F Archives' Armory Lockers, Bomb Site A, is a medium sized room with a lot of cover for defenders to hide behind. However, this room also grants a lot of opportunities to attackers. There is a door along with a breakable wall that leads directly outside. Opening this wall will put the defenders at a disadvantage and allow you and your teammates to enter the bombsite without having to go through the winding hallways surrounding the sites. Along with this, there is another door leading to the hall outside. This site is directly connected to Bomb Site B, creating three separate angles of attack of which the defending team will have to be constantly mindful of. 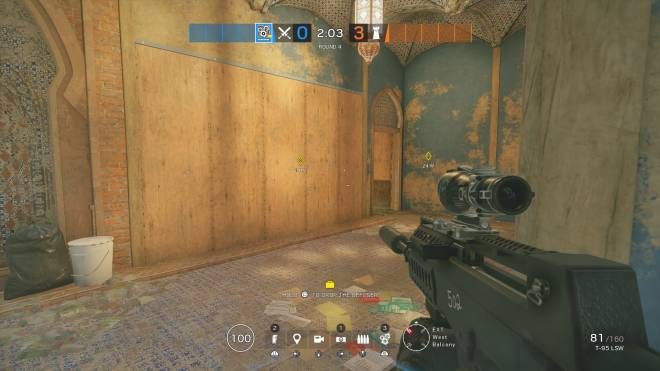 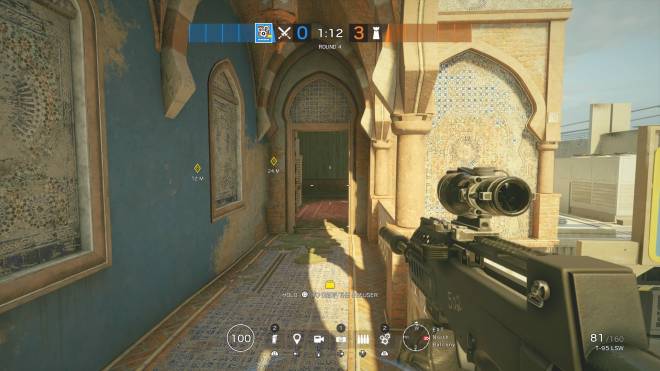 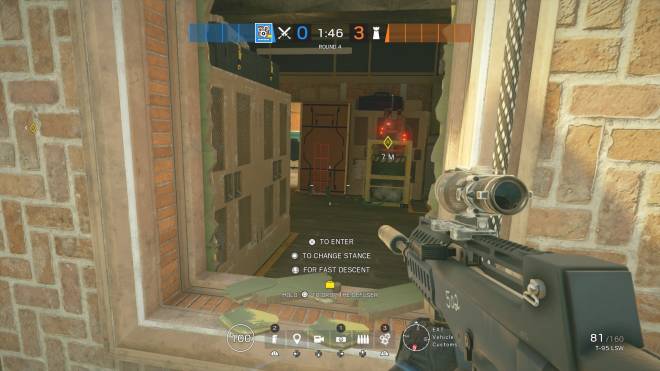 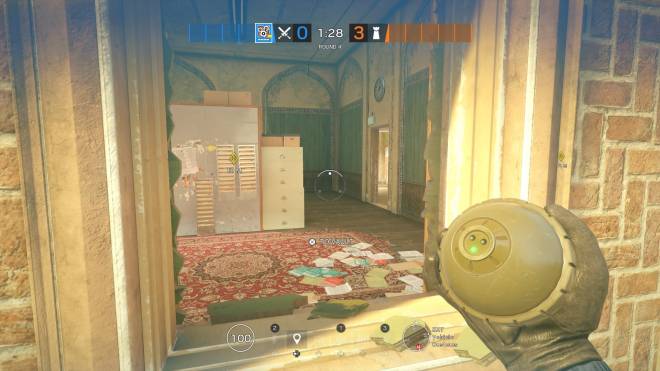 ▲ Another window that can be accessed from the sub-roof. This provides a slightly different view of Bomb Site B.