Guide to playing ‘Fuze’ in ‘Consulate’

Villa is a slightly larger battlefield consisting of a basement, 1F, and 2F. Although each floor is not that wide, there are three stairs that can go up and down, so it is good for the defensive team Roamer to play. It is also a place where you need to pay attention to the defense team's spawn kill from the start of the game as there are many windows on all sides of the building's exterior walls. But on the contrary, if the offensive team somehow reached the building, these windows could be used to check the inside.   Objective location is located one each on the 2F, 1F, and basement, and there is an additional double-decker Objective Location where Bombsite is placed on the 1F and basement. This double-decker Objective Location is not favored by the defensive team because it has to defend both the basement and the 1F at the same time. Because of this, it does not appear often, but if the round gets longer, it is chosen at least once. 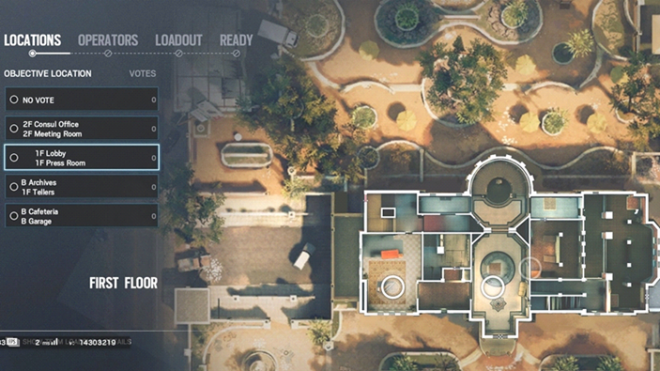 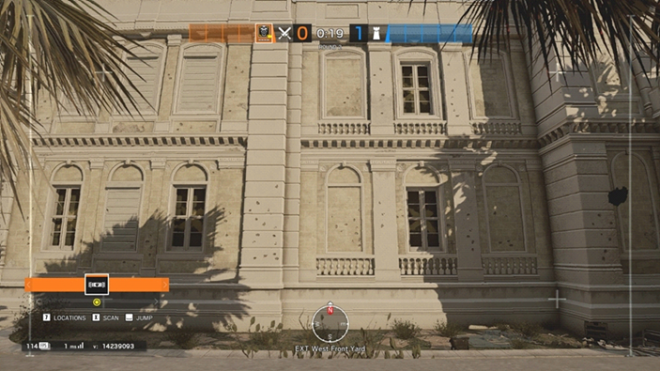 ▲ There are many windows on the Police Line spawn area in the front of the southern building, so you must be careful of spawn kills.     Fuze is an operator that can use dedicated equipment, Cluster Charge, to carry out the extensive bombing on the other side of the wall or window that can be destroyed. Since the Cluster Charge fires grenades that have a high damage and a large range, it is possible to use it to remove all gadgets installed on the other side, and if lucky, it can also kill the defensive team. However, each grenade has a slight delay before it explodes, so it is not difficult to get out of the blast range. For this reason, it is better to use it as a feeling of kicking the defensive team out of the area rather than catching them.   Fuze is also a notorious operator for the high firepower of all weapons in choice. In particular, one of his Primary Weapon, the AK-12 is the highest-performing weapon of all guns of the offensive team, and only Ace and Fuze are available to use it in the game. In addition, PMM Pistol, a Secondary Weapon, has 61 Damage which can almost do the same as Revolver damage, and sometimes players use it to choose the Ballistic Shield as Primary Weapon. Fuze is also appropriate for the role of Entry Fragger, who actively engages in front-line combat because any weapon he chooses has considerable firepower. 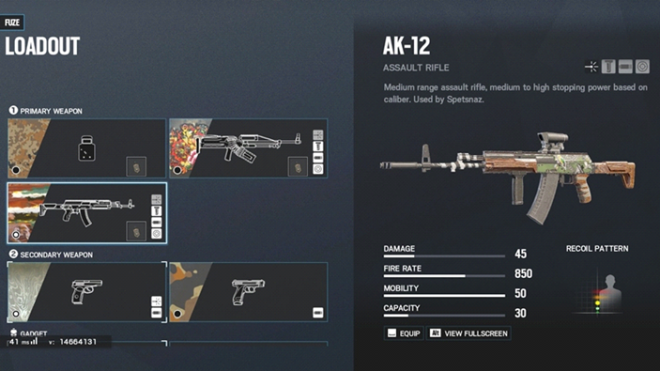 ▲ Fuze is also an operator that has the advantage of a variety of Loadout.     ▣ In case, the site is '2F Consul Office ~ 2F Meeting Room'   The 2F is the top floor of the Consulate, and if the offensive team tries to enter the 2F, they must break the outer wall window and enter using rappel or use the three stairs from the 1F to the 2F. However, entering through the window is easy to detect due to the loud noise, and the stairs are likely to be guarded by the defensive team. Therefore, it is good to say that this place is also a difficult place to attack Consortium's Objective Location.   First of all, let's start the attack by each hanging on several windows of the outer wall and the Balcony on the 2F. At the same time, you will be able to catch a defensive team while checking the inside from various angles if you are lucky. It will be good for Fuze to set up Cluster Charge without breaking the windows immediately and then fire them up to clear up the defense gadgets around the windows in advance or drive out the defensive team before starting checking.   Once the building interior has been cleared up to some extent, let's boldly try to enter the building and move to the Bombsite. For Fuze, let's trust AK-12’s performance and try to engage actively. Unexpectedly, it would be easy to break up the confrontation. 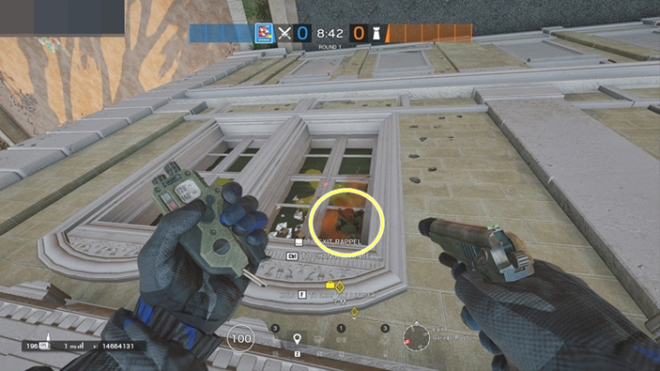 ▲ When installing cluster bombs on windows, it is essential to completely hide your body. 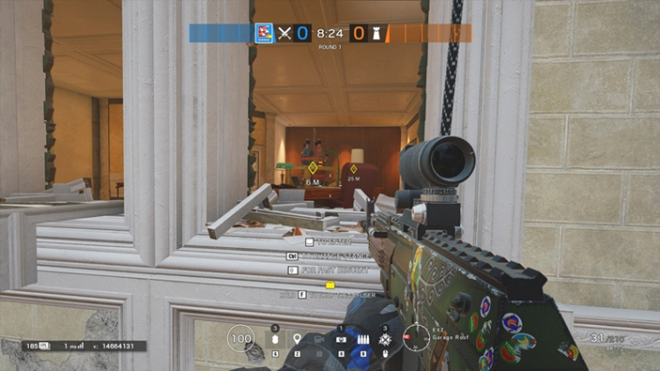 ▲ First, clean the inside with a Cluster Charge and then break the window to make it easier to check. 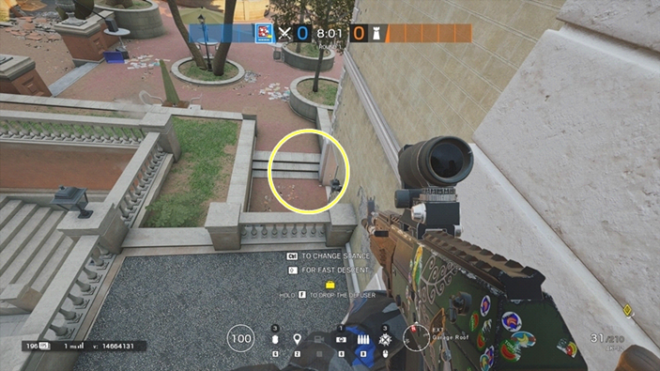 ▲ The defensive team can run-out play to the Emergency Exit on the 1F and raid the rappelling offensive team, so be careful of that position. 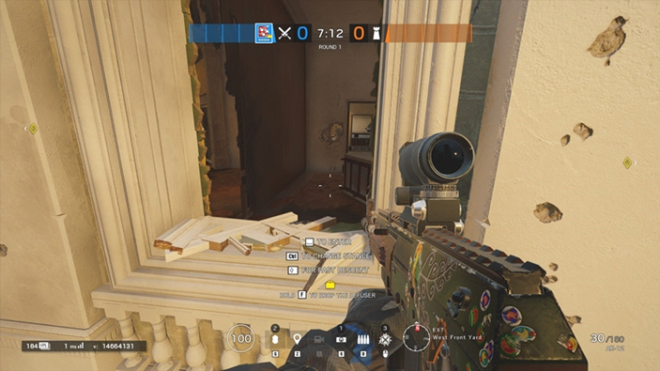 ▲ The defensive team is often hiding in the Waiting Room, between the Bombsites, so it's good to check from this side as well. 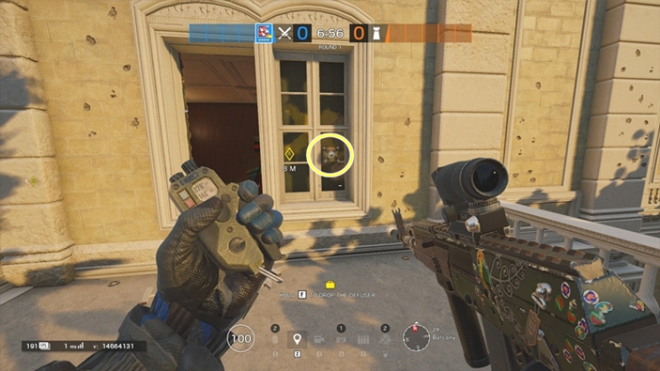 ▲ If you're on the Balcony, let's blow up a Cluster Charge over here before you break the window. 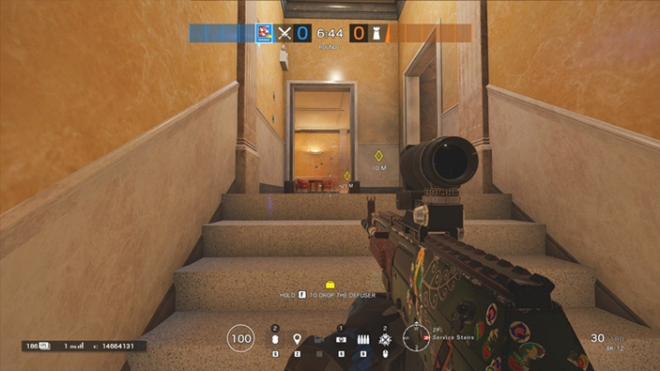 ▲ The explosion of Cluster Charge reaches the top of the Service Stairs, removing most of the defense gadgets. 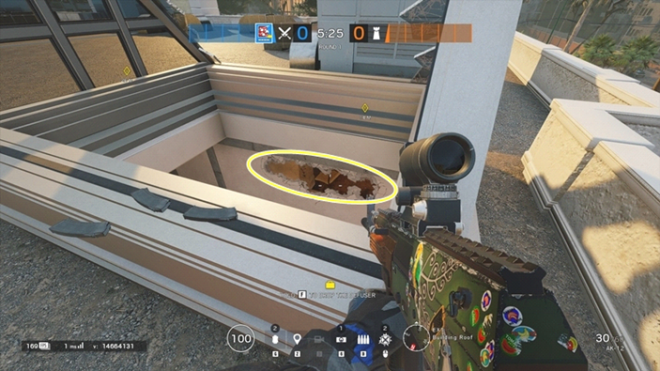 ▲ It is possible to make an angle by shooting this side from the rooftop.     ▣ In case, the site is '1F Lobby ~ 1F Press Room'   If you just break the main entrance barricade on the 1F Lobby, you'll see Lobby Bombsite at a glance from outside the building. You may think that you can throw a Smoke Grenade and set up a defuser right away, but the defensive team can check from the Public Bathroom between the two Bombsites, and sometimes they would try to break the floor and aim the offensive team from the Meeting Room on the 2F, so it can be dangerous.   First of all, it is necessary to check where and how the defensive team is defending through drone reconnaissance. In particular, if there are defensive members defending at the Meeting Room on the 2F, it would be good to catch them first, and since you are on the 2F, it is also good to do hatch drop through the hatch at the Meeting Room and Consumer Office or vertical play.   If you want to attack the Press Room instead of the Lobby, enter the Emergency Exit at the back and launch the attack. In this case, it would be even better if the offensive team makes the defensive team’s defense direction confused by simultaneously attacking the Press Room window and the 2F hatch. 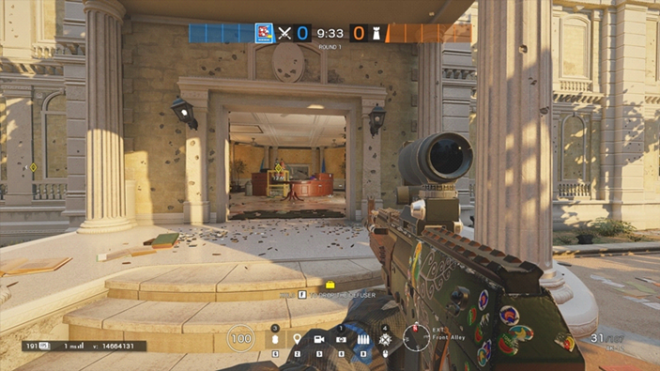 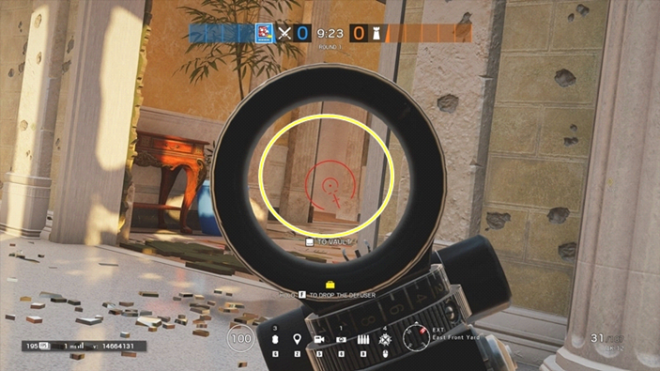 ▲ But it's hard to get in, as there's a high possibility that there’s a defensive team at the Public Bathroom watching the main entrance. 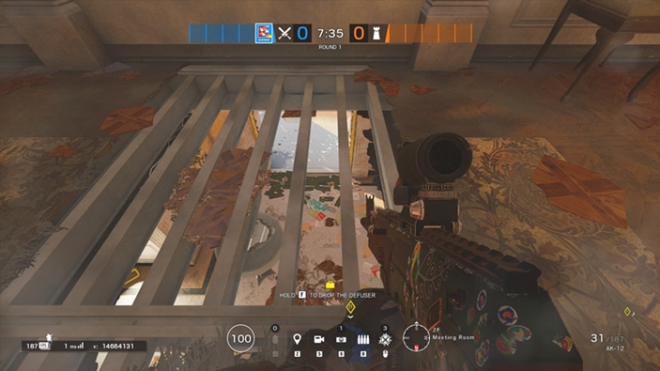 ▲ Also, the defensive team can break the floor and wait for the offensive team at Meeting Room on the 2F. ▲ You can go directly up to the 2F, clear the Roamer, open the hatch, and attack. 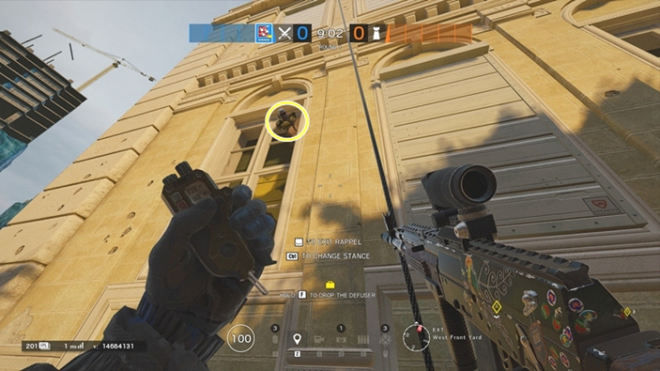 ▲ The Press Room on the 1F would be nice to have at least one person checking through the window. 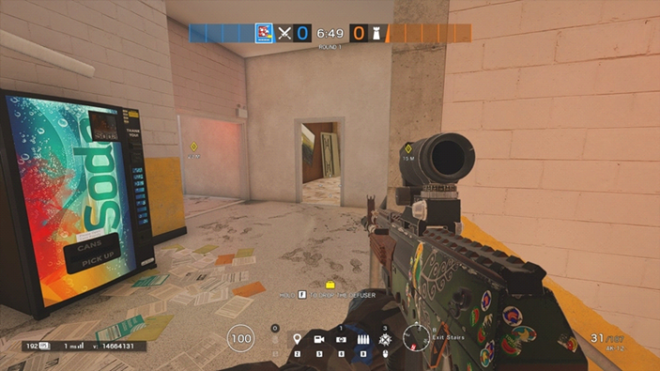 ▲ Enter the Emergency Exit on the 1F and proceed to the Press Room.     ▣ In case, the site is 'B Archives ~ 1F Tellers'   Bombsite is placed on both the basement and 1F at the same time, and the defensive team is also distributed to the basement, 1F, and 2F. For this reason, it is possible to occupy Bombsite easily if the offensive team aims one place at the same time, but it will not be that easy as the defensive team will also come cover.   If you want to target the Tellers on the 1F, it is dangerous to enter the Visa Entrance directly, it is recommended that you first check through the Visa Office window or the Administrative Office hatches on the 2F before proceeding with the attack. If you want to attack the basement Archives, it is common to try to enter from the Emergency Exit or Garage or to try hatch drop on the 1F. Sometimes, the defensive team Roamer takes the stairs and makes a detour to catch the back of the offensive team, so let's keep checking behind while moving to the Archives. 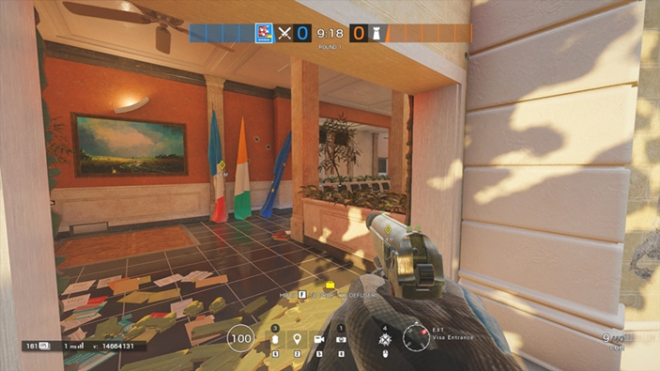 ▲ It seems good to push straight from the Visa Entrance to the Tellers, but... 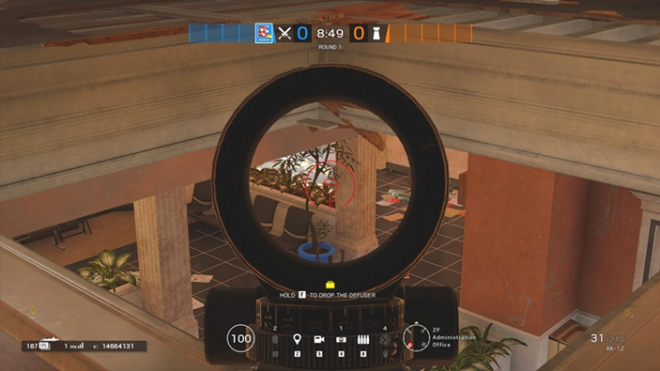 ▲ There may be a defensive team waiting after opening the hatch at the Administrative Room on the 2F. 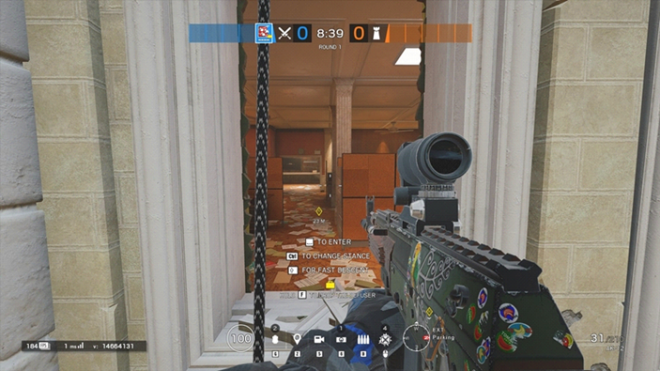 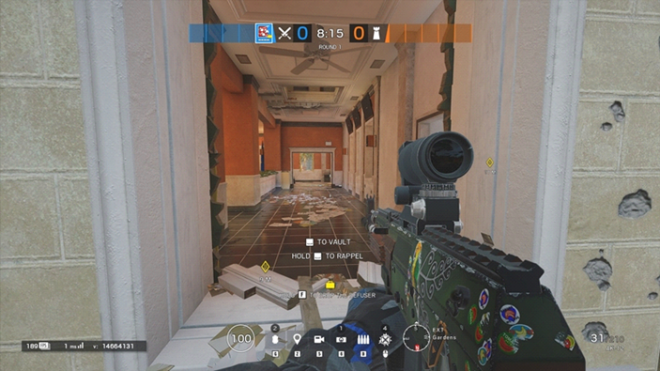 ▲ In addition, it is a good idea to use the various window angles of the Visa Office. 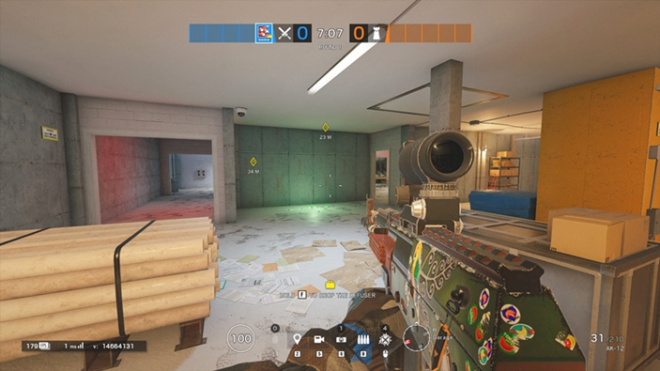 ▲ When attacking the basement, you can either infiltrate the Garage and proceed... 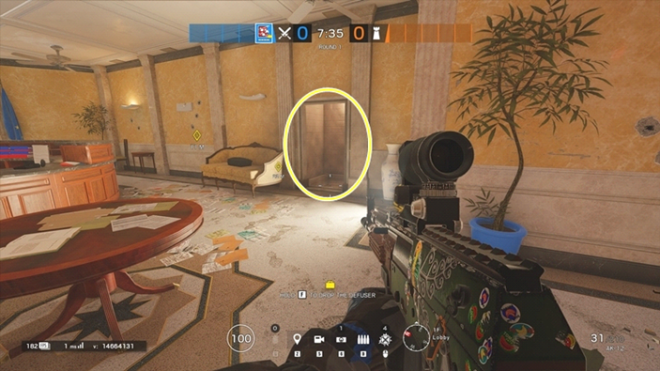 ▲ Or if go down though this hatch from the Main Lobby, 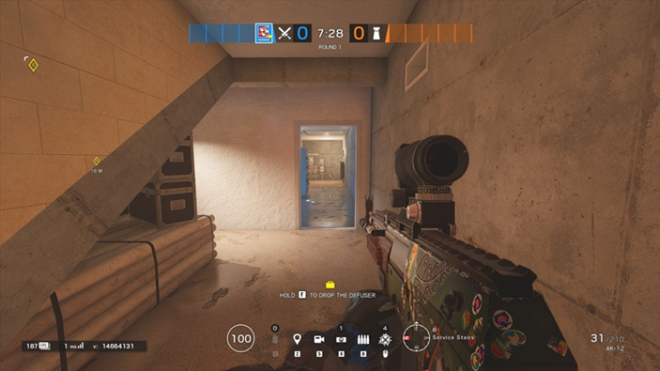 ▲ You can come straight down to the Archives.     ▣ In case, the site is 'B Cafeteria ~ B Garage'   The basement has three exterior walls at the Garage, so it is important than anything else to breach them. That's why the offensive team needs hard breachers such as Thermite and Hibana, while the defensive team often uses Bandit or Kaid to disrupt them. However, it is not that difficult to breach through these walls because we can check the back of these walls by entering the Emergency Exit and can also do Vertical play at the Press Room on the 1F. Therefore, the delay in this process is a decisive factor.   Fuze can easily remove the gadgets behind the Garage's reinforced wall and drive out Bandit or Kaid, just by installing Cluster Charges on the floor of the Press Room. For this reason, it is good to try to infiltrate the Press Room first, but the defensive team is also likely to be ambushing around because they also know that Vertical play is strong here. Before entering, make sure to check the surroundings with drones to ensure safety before proceeding with the breaching. ▲ The Garage wall which is the most important wall in the basement Objective Location, how quickly you break through this wall, determines the victory. 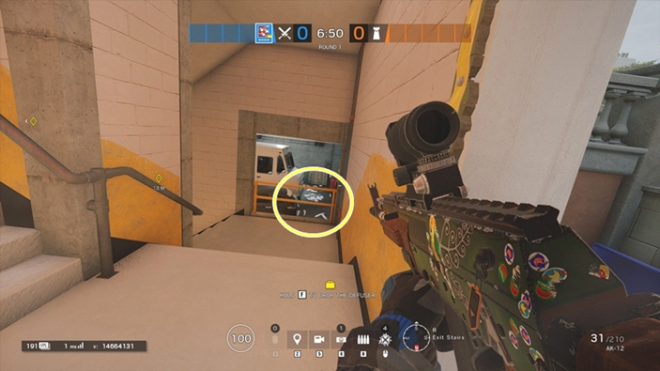 ▲ The back of the reinforced wall can be checked at the Emergency Exit, but this angle is dangerous. 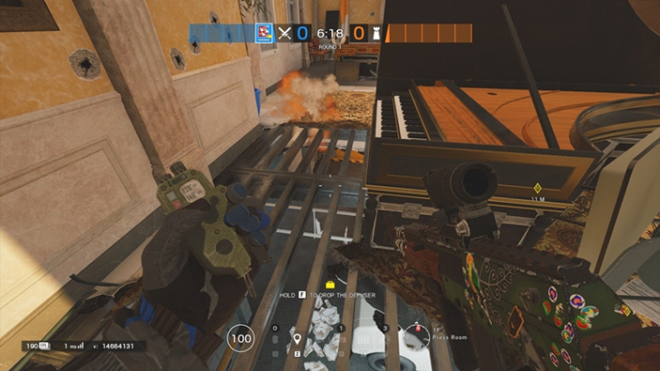 ▲ You can safely clear the back of the reinforced wall by blowing up Cluster Charges around the Piano in the Press Room on the 1F. 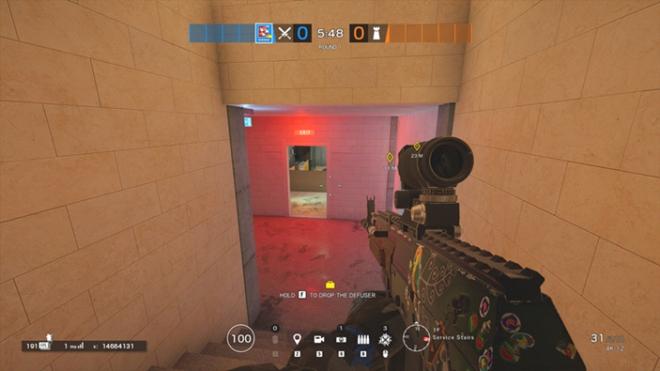 ▲ While everyone is paying attention to the Garage, there is also a way to approach the back and attack the Cafeteria.