Guide to playing ‘Jackal’ in ‘Clubhouse’

Clubhouse is a battlefield consisting of a basement, 1F, and 2F. Each floor is not that wide, but because it consists of three floors, it can be a bit annoying for the offensive team if the defensive team operates Roamer or uses the map wider. However, the offensive team also has many places that can check the Bombsite area from the outside of the building through windows, so the attack often launched by checking outside first and then attempting to penetrate inside.   The Clubhouse's Objective Location is located two on the 2F, one on the 1F and one in the basement. Among them, the Bombsite on the 1F and 2F have windows, doors, and breachable walls that can check inside the Bombsite from the outside, while no windows or walls exist in the basement. For this reason, defensive teams prefer the basement location. However, the basement has a risk of being attacked by Vertical Play or Hatch Drop on the 1F. 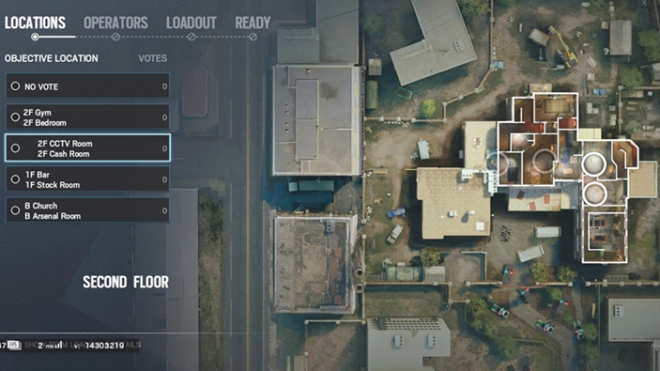 ▲ Clubhouse's Objective Location, most Bombsite is checkable from outside the building.     Jackal is an operator who can detect and track the defensive team's footprints using his dedicated equipment, the Eyenox Tracker (Eyenox Model III). Because of this equipment, he is notorious for the offensive team's best counter Roamer. He is especially effective in catching the defensive team Roamer because the equipment can identify the owner of the footprints, when they were there, and where they are now. Perhaps, for this reason, Jackal was often banned in Ranked Game.   Jackal can use C7E Assault Rifle, PDW9 SMG, and ITA12L Shotgun as Primary Weapon, but you don't have to choose shotgun as Primary Weapon because he can use ITAR12S shotguns as Secondary Weapon. For this reason, players usually choose C7E and PDW9 according to their taste. The C7E has some recoil but has high damage, while the PDW9 has stable rebound and aiming speed, with a high capacity of 50. ▲ C7E is a weapon with 46 damage and 800 Fire Rate, and it an AR that is highly ranked among the offensive team's weapons. 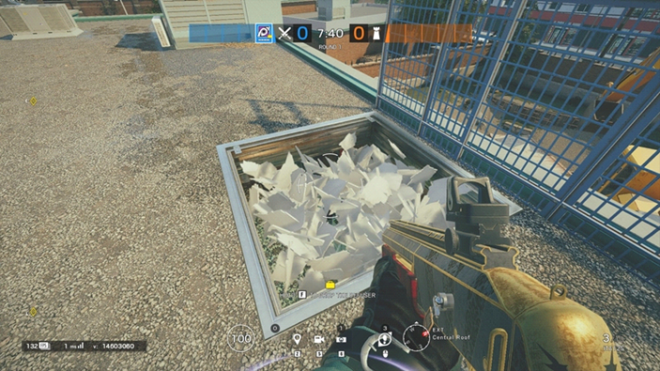 ▲ Jackal can do soft breaching as he can use ITA12S shotgun as a Secondary Weapon.     ▣ In case, the site is '2F Gym ~ 2F Bedroom'   Both Bombsite can be checked through the window by climbing to the outside Central Sub-Roof. While some of the offensive teams keep the inside in check through the windows here, the hard-breacher team work on the breaching of the Bedroom Hallway from Balcony on the other side, and the others infiltrate the rooftop hatches or building on the other side to attack both sides.   In this case, Jackal can check the Central Sub-Roof window or penetrate the opposite building, but in terms of the efficiency of his ability, it is appropriate to act as a penetrator. After entering the Garage or CCTV Room, turn on the Eyenox Tracker and check the footprints and move on to Bombsite. If you find Roamer's footprints in progress, it would be best if you could catch them, but if you didn't, it would be helpful enough to drive them towards Bombsite. 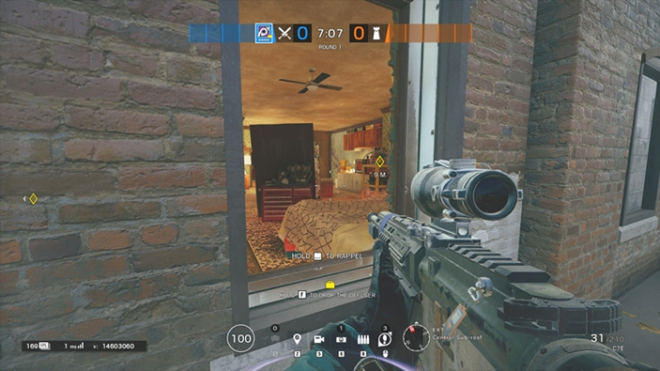 ▲ You can check the back of the Bedroom Hallway reinforced wall from the Gym window, which can also help with the breaching. ▲ However, this place is at risk of being attacked from the windows of the CCTV room, so be careful. ▲ Jackal and others should break into the building, drive out the Roamer in the CCTV room, and put pressure on Bombsite. 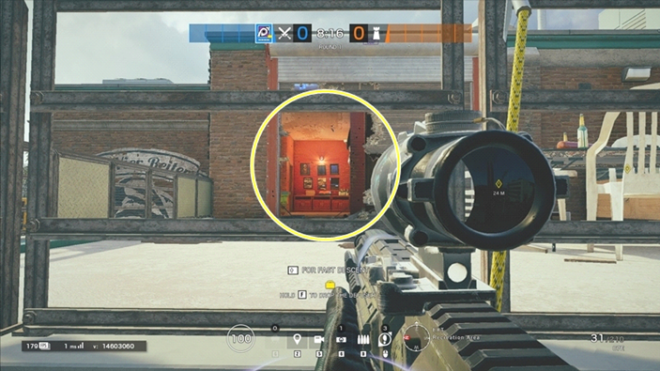 ▲ At the Balcony, if the hard breacher breaches this wall, you can check the entire Bedroom Hallway with only your head out while rappelling.     ▣ In case, the site is '2F CCTV Room ~ 2F Cash Room'   This is also where the offensive team can check the CCTV Room from the outside Central Sub-Roof and breach at the Eastern Sub-Roof from the other side, so a battle similar to the Bombsite explained above goes on. While one of the offensive team checks through the CCTV Room window, the hard-breacher team breaches through the CCTV Room wall at the Eastern Sub-Roof and takes control of the Bombsite.   In response, the defensive team will try to defend by making the Rotation at the Cash Room or Garage. For this reason, Jackal and the rest of the offensive team should infiltrate the building and confuse the defense direction of the defensive team. There are several routes, but it would be good to start the attack from the Gym, Bedroom window, or the Logistic Office hatch and approach the construction or take the Eastern Stairs on the 1F. ▲ This is also where the walls connected to Bombsite are often breached at the Eastern Sub-Roof. 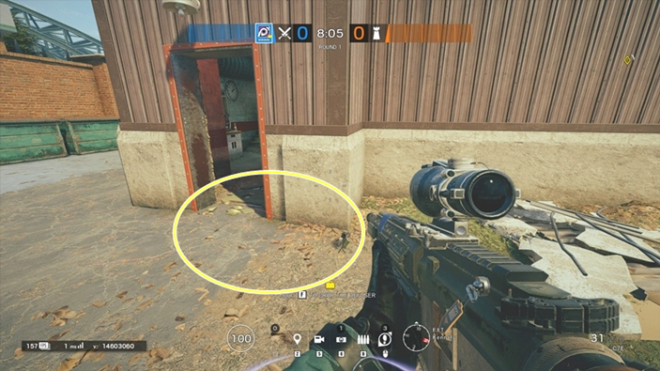 ▲ I recommend putting Claymore Mine at the Garage door, as the defensive team often does run-out plays aiming at the Eastern Sub-roof's breaching team. ▲ Likewise, you can check the back of the CCTV Room reinforcement wall at the Central Sub-Roof window, but be careful as you can be checked from the Construction window right next to you. 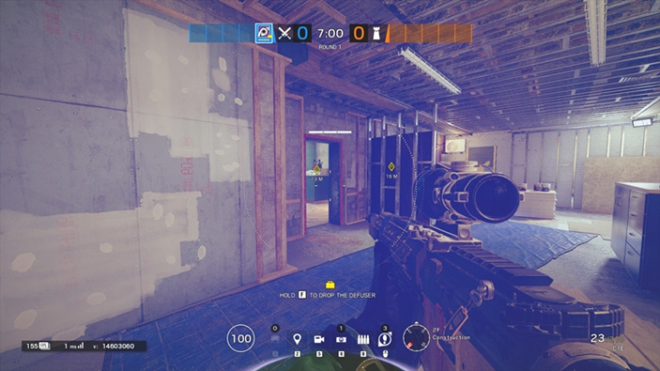 ▲ It is also good to enter the building and attack from another angle while the offensive team is processing the breaching work. 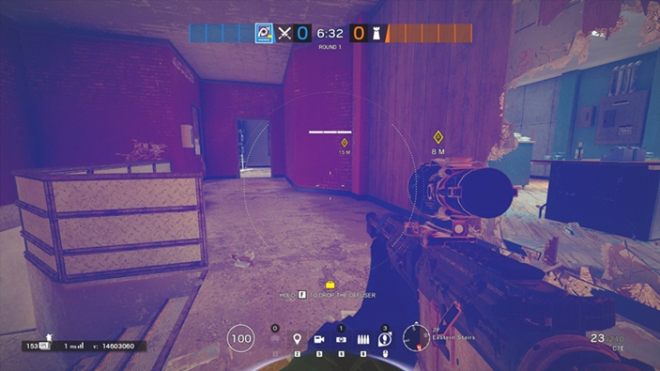 ▲ The Eastern Stairs, where defensive teams often defend. Let’s approach from the 1F and aim for a surprise attack.     ▣ In case, the site is '1F Bar ~ 1F Stock Room'   On the 1F, the offensive team has many doors and windows that can attack around Bombsite from outside the building. There are even two hatches upstairs around Bombsite, so you can use them to try hatch drop. There are so many attack routes that make the offensive team hard to choose which route it will attack.   Although the Stock Room is a Bombsite, it has two doors connected to the outside, so there is nowhere for the defensive team to hide. For this reason, defensive teams tend to pierce the Stage wall and defend here, but even this place is exposed from the Lobby entrance on the 1F, so the more pressure the offense team puts on from various directions, the more advantage the offensive team can get.   In addition, there are other attack routes, to break through the Pool Table wall at the Strip Club or try hatch drop on the 2F. Depending on the situation, let's attack from various directions and confuse the defense direction of the defensive team hidden around Bombsite as much as possible. ▲ There is also a strategy to install the defuser by force with Montagne at the front of the Stock Room. ▲ During the installation of the defuser, it would be nice if someone could cover the opposite door of the Stock Room. 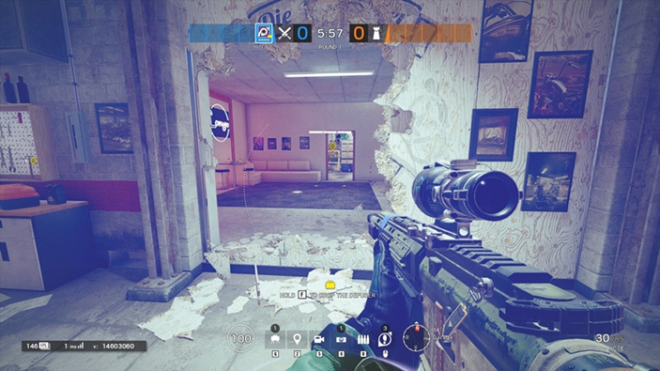 ▲ You can break the wall at the Garage and keep Stock Room and Lounge in check at the same time. 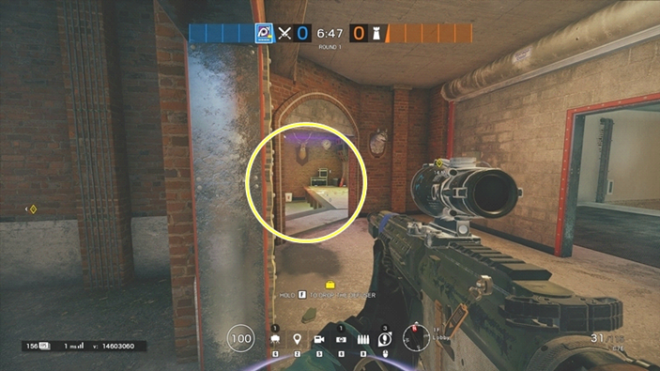 ▲ The members defending the Stock Room behind the Stage can open the Lobby door on the 1F and attack. 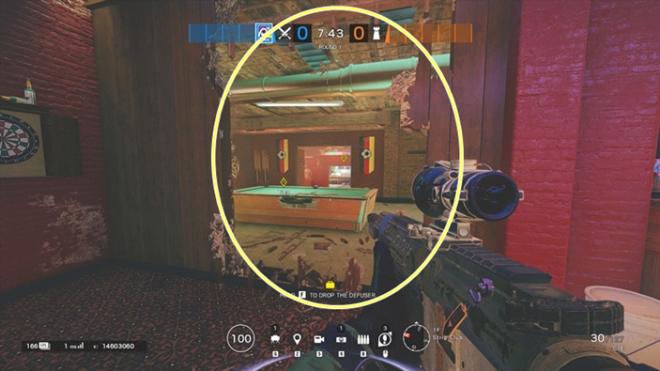 ▲ If your team is using a hard-breacher, it's a good strategy to breach the wall at the Strip Club and attack from the pool table. 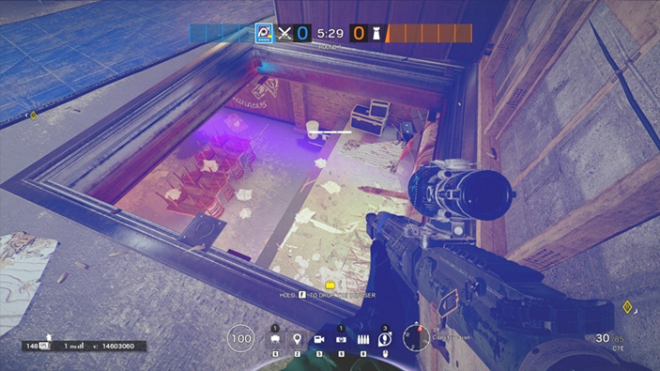 ▲ It's not bad to open the hatches on the 2F and try hatch drop according to the situation.     ▣ In case, the site is 'B Church ~ B Arsenal Room'   As explained above, there are no externally connected windows or walls in the basement like other Bombsite, so the offensive team must first infiltrate the building and then attack the Bombsite. During this process, the team can be attacked by the defensive team Roamer, so the offensive team must not proceed with the attack alone as much as possible and move while covering each other's angles with the team members. Jackal's Eyenox Tracker is useful in these circumstances.   In general, offensive teams often use routes from Construction Site to Escape Tunnel or enter the Garage and then push to the Utility Room. If you have a hard-breacher or able to do vertical play, it is recommended that you move to the Kitchen on the 1F. However, as the Kitchen hatch is located just above the Arsenal Room, and it is fatal for the defensive team, be careful between the attack because it is easy to be attacked by the defensive team Roamer. 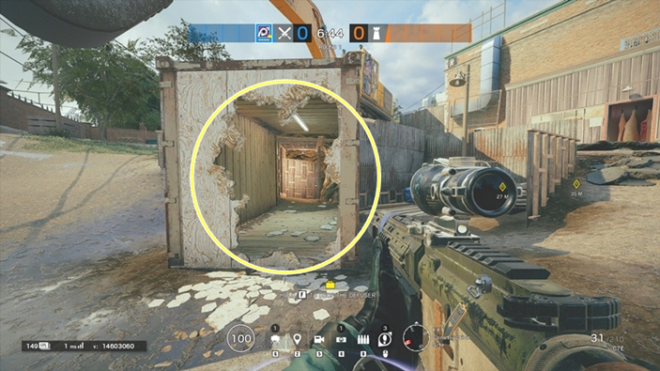 ▲ If you have spawned at the Construction Site, let's break through the Container wall and take the Escape Tunnel. 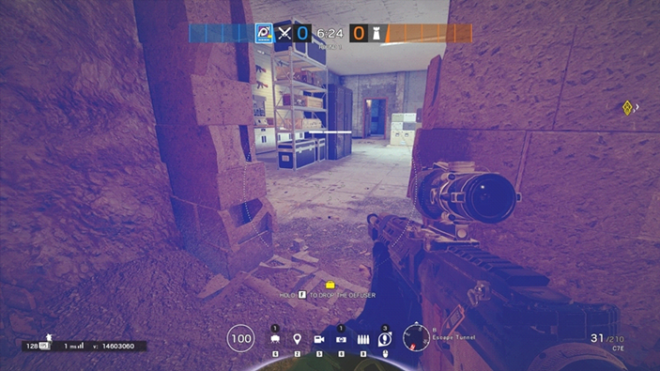 ▲ You can get straight to the Arsenal Room without worrying about Roamer. 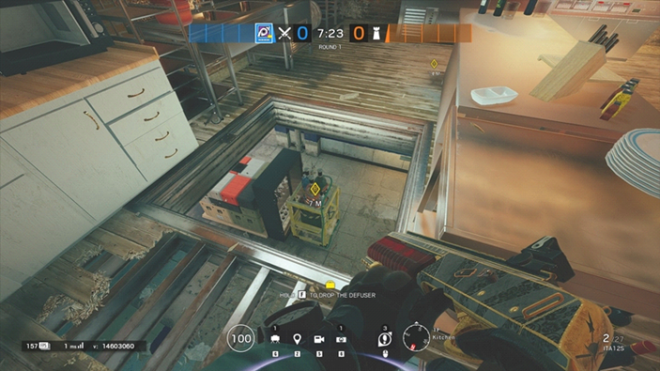 ▲ When you open the hatch at the Kitchen on the 1F, you will see an angle overlooking the Arsenal Room. ▲ The Garage's basement ladder leading to the Utility Room, just next to the Arsenal Room. 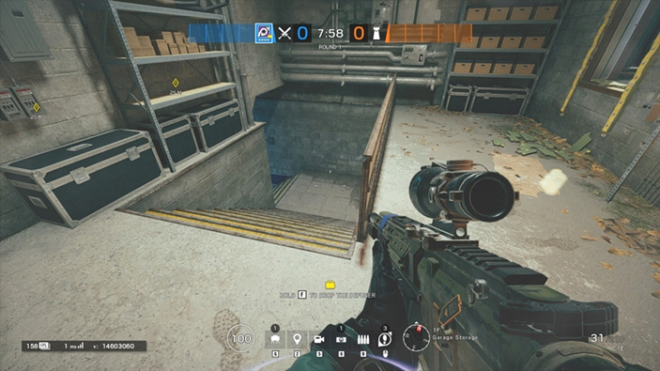 ▲ You can also go to the Utility Room through the stairs of Garage Storage. 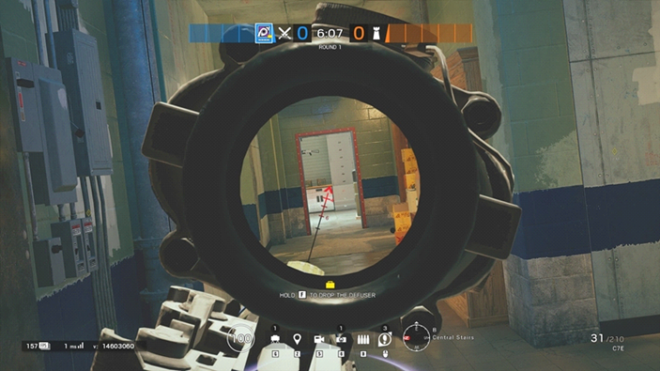 ▲ If the situation isn't bad, you can get down through the Central Stairs and secure the Basement Hallway angle.