Guide to playing ‘Blackbeard’ in ‘Border’

Border is a narrow battlefield consisting of only 1F and 2F. The size of the battlefield is quite small, and there are windows, doors, and walls that are connected to the outside, so it is also a place where the two teams battle around these places. Objective Location has a unique structure with one on the 2F and three on the 1F, and most of the 2F floor is made of a breakable material, so for the offensive team, it would be good to infiltrate the 2F and try vertical play.   Because the size of the battlefield is quite small, the defensive team often uses the entire map to defend, and often do run-out plays from the window on the 1F or through the Balcony on the 2F. For this reason, the offensive team needs to be especially careful when checking the inside of the building from the outside. It would also be good for the offensive team to prepare Claymore Mine and set it up at the main run-out play points. 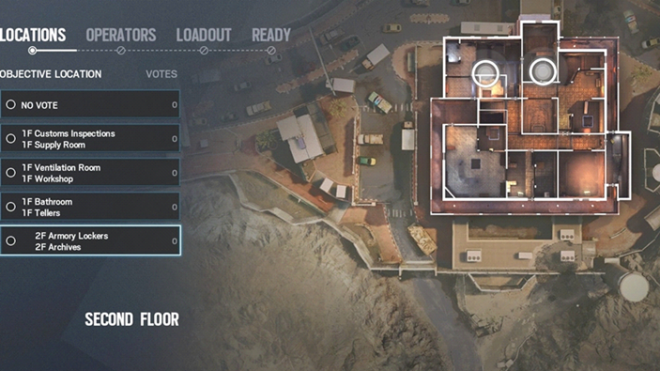 ▲ In Border, three Objective Locations are located only on the 1F.   Blackbeard is an operator specialized for 1:1 engagement as he can install Rifle Shield on the front of his Primary Weapon. Rifle Shield can defend 50 damage, preventing headshots during a battle, which can be a significant advantage in Rainbow Six: Siege, where TTK is short in combat. In particular, he is especially powerful when the body part is covered and only the Rifle Shield part is put out, so it is usually used as a way to engage while rappelling on the exterior walls.   However, Blackbeard's primary Weapon performance is relatively low due to the strength of Rifle Shield. The Blackbeard's auto weapon, MK17 CQB Assault Rifle has a fairly high Damage of 49, but the Fire Rate is extremely low at 585 and has only 20 Capacities. Furthermore, the disadvantage of mounting the Rifle Shield is that it is very disadvantageous when faced suddenly with a defensive team because it has a penalty that significantly lowers mobility instead of decreasing the vertical recoil of the gun.   Border has a rather feeling out of place for Blackbeard, who has to engage at a distance because the building is small. If we have to engage, it would be better to check the inside through windows outside the building and enter the building if the risks are removed. It is also recommended to engage using the High-Damage Secondary Weapon D-50 if close-range engagement is expected. 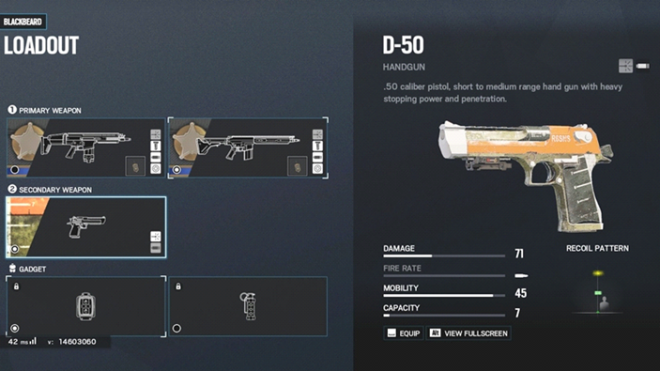 ▲ The D-50 has a very high Damage of 71, so it is better to use Secondary Weapon at close range.     ▣ In case, the site is '1F Customs Inspections ~ 1F Supply Room'   There is an external wall at the outer Parking Lot Alley leading to the Detention, so if there is a hard-breacher, you should start by breaching this reinforced wall. The Detention is connected to the Supply Room and Custom's Inspections which is the Bombsite, so if you break through this wall, the offensive team will get a big advantage. In addition, there are two hatches that lead to Custom's Inspections in the Security Room on the 2F, so it is also possible to do vertical plays through the floor.   However, since Blackbeard’s ability is not related to hard breaching, and vertical play is limited only when Breach Charge is prepared, there is a feeling that he doesn't suit either side. Rather, it would be more appropriate to keep on eye on the run-out play by the defensive team while the hard-breacher is processing the breaching work, or to check the inside of the Bombsite through windows. 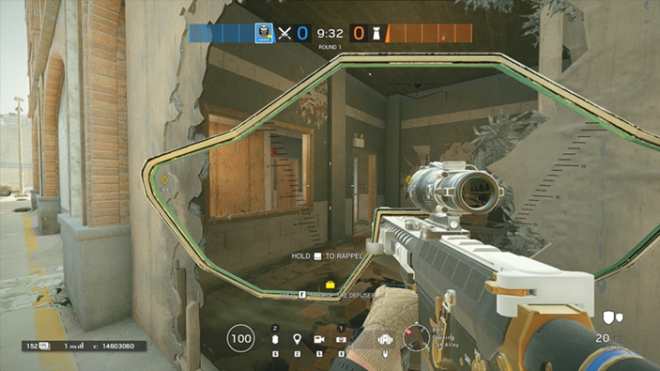 ▲ If you breach the Detention wall, the Supply Room and the Custom Inspections will be close and the offensive team will have a huge advantage. 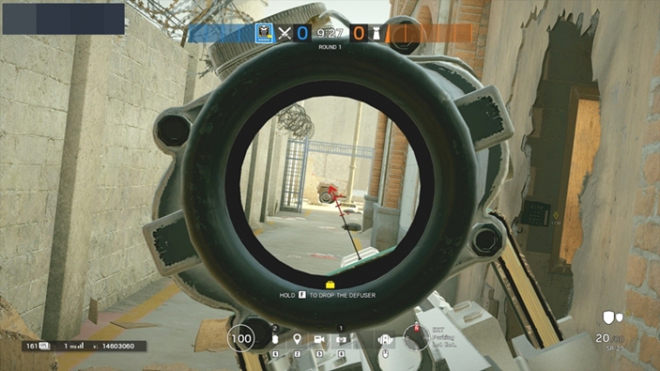 ▲ Let's keep an eye on the defensive team doing run-out play while the hard-breacher is still in the breaching process. 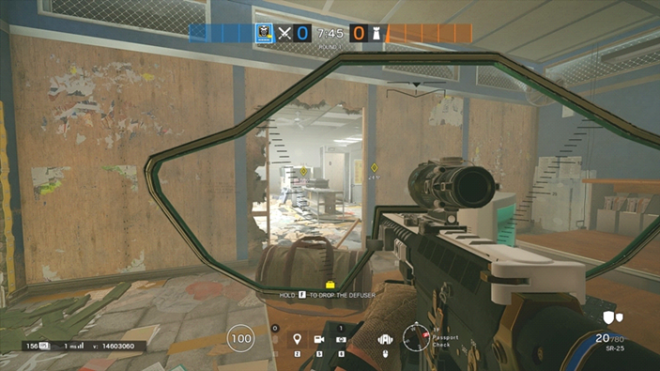 ▲ Entering from the Passport Check and breaking this wall is also a good idea. 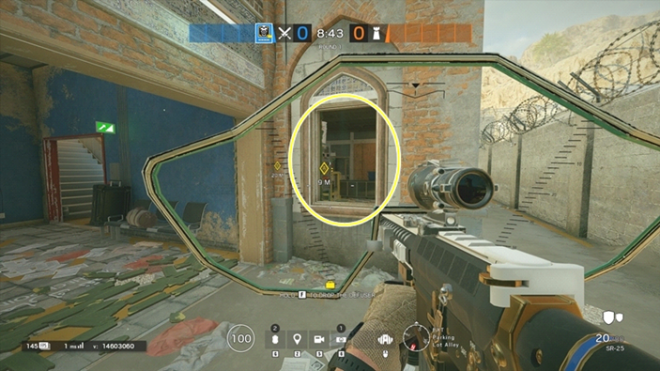 ▲ It's good to check the Supply Room directly from this window, but you can be attacked from the Exit Hallway on the left side. 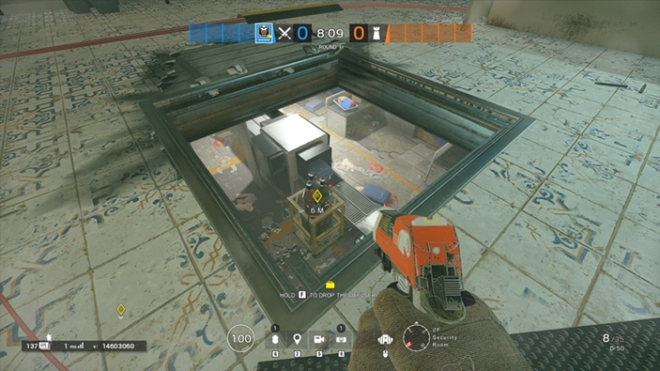 ▲ It would be better to penetrate the security room on the 2F, open the hatch and do vertical play through the floor.     ▣ In case, the site is '1F Ventilation Room ~ 1F Workshop'   There is no place like the Detention External Reinforcement Wall described above, but one of the Bombsite, the Ventilation Room is completely exposed, so it would be good to attack mainly around here. Since there is no room for the defensive team to hide inside, it is also possible for the offensive team to enter here and install the defuser. However, the defensive team is likely to make a hole from Server Room to the Ventilation Room to defend the area, or to watch through the floor at the Armory Lockers on the 2F.   It is also a good idea to infiltrate the 2F first, as there are two hatches on the 2F each at the Armory Lockers and Archives that leads to the Bombsite area. As I said earlier, the defensive team will pierce the 2F floor, guard the Ventilation Room, and the 2F hatch, so if the rest of the offensive teams clear the 2F first, they will be able to proceed with the attack easily. ▲ As you can see, it will be easy to install defuser in the Ventilation Room because there is only a little place for the defensive team to hide. ▲ But this place is in danger of run-out plays from the 2F window of the Archives... 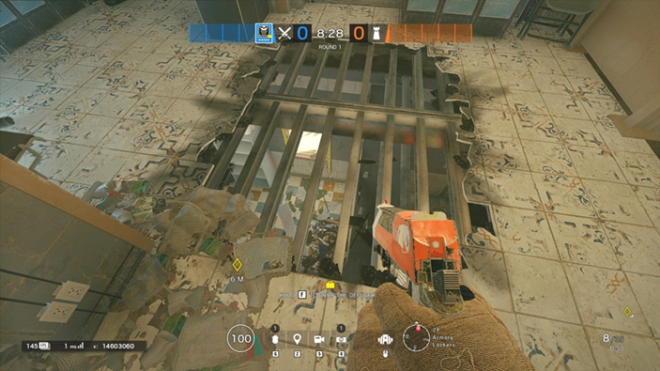 ▲ If there is a defensive team at the Armory Lockers on the 2F, it will be difficult to take over. 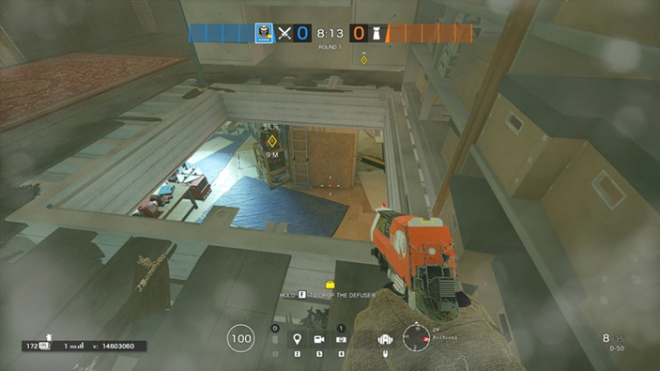 ▲ There are two hatches on the 2F, the Armory Lockers, and Archives, leading to Bombsite, so it would be good to occupy the 2F first.     ▣ In case, the site is '1F Bathroom ~ 1F Tellers'   There is a wall that leads directly to the Tellers Bombsite here, so it would be good to first use a hard-breacher to breach here first. The wall has a window right next to it, which allows you to remove Shock Wire or Electroclaw installed behind the wall, and can also keep the defensive team in check for a Bandit Trick attempt. Therefore, it would be better to say that breaching this reinforced wall is almost inevitable.   The problem is after breaching the Tellers reinforced wall, the defensive team is likely to have other defending plans, assuming that the reinforcement wall will be breached. For example, there may be defenders around the Workshop or Bathroom, or they may be looking down the Tellers at the Office after opening the hatch on the 2F. For this reason, it would be better to first identify the situation around Bombsite with a drone and then try to enter.   Blackbeard is not suitable for close-range engagements, so it would be better to check inside through wall holes or windows breached by the hard-breacher. However, there are times when the defensive team does a run-out play at the Archives or Offices on the 2F, so let's be wary of these points and proceed with the checks. 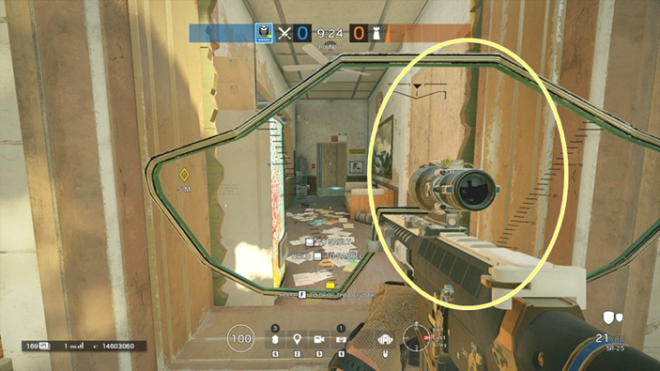 ▲ The Tellers has a window next to the outer reinforced wall, making it easy to check the defense gadgets or operators behind the wall. 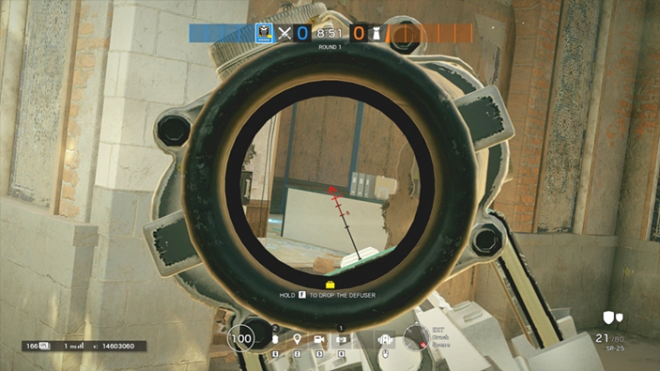 ▲ Because of this, it is almost inevitable for this wall to be breached. 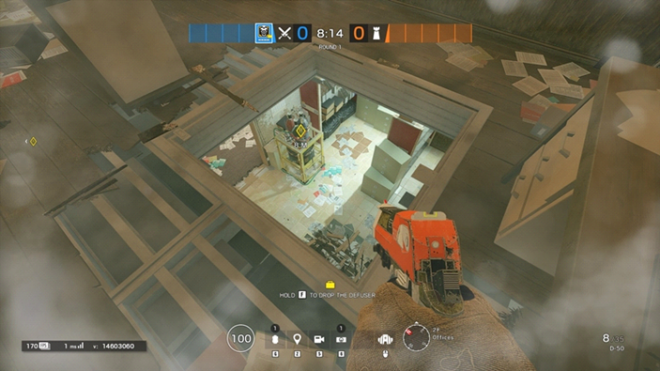 ▲ However, there is a high possibility that the defensive team is opening the hatch and waiting in the Office on the 2F, so we have to clear this place first. 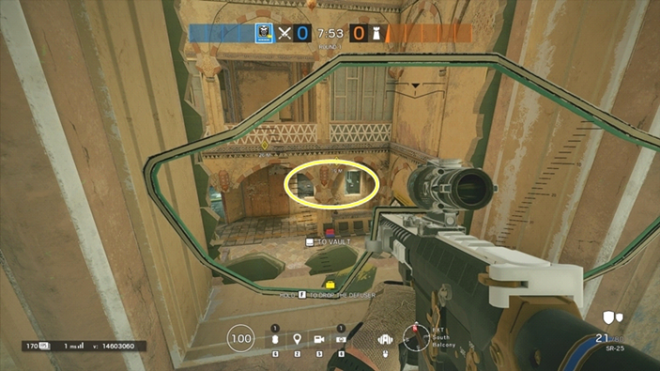 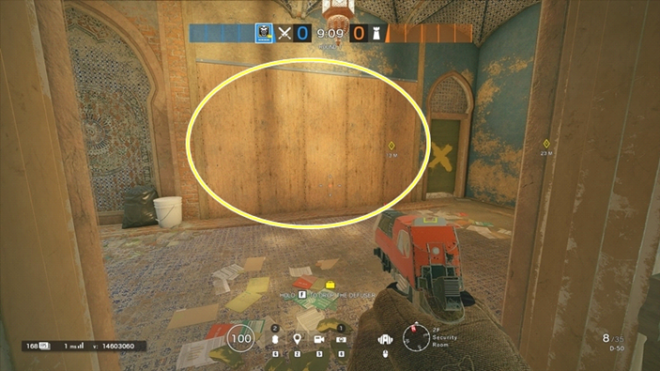 ▲ It would be nice if the hard-breacher breaches the Armor Lockers wall at the West Balcony, but you have to clear the Security Room first. 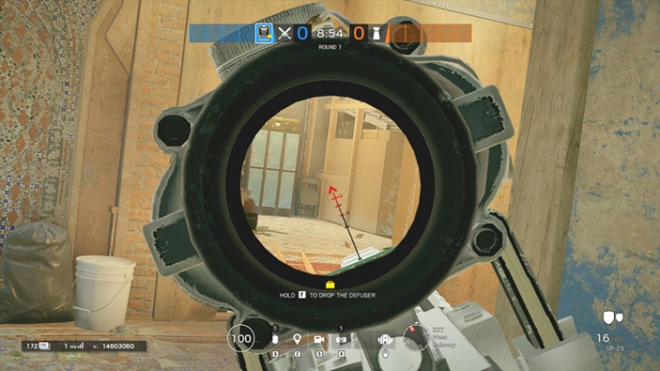 ▲ Clearing the Security Room and successfully breaching the wall would be a great advantage. 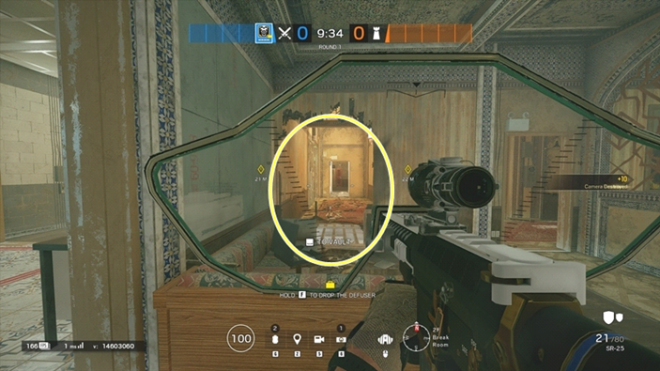 ▲ Make a Main Hallway angle through this wall at the Break Room. 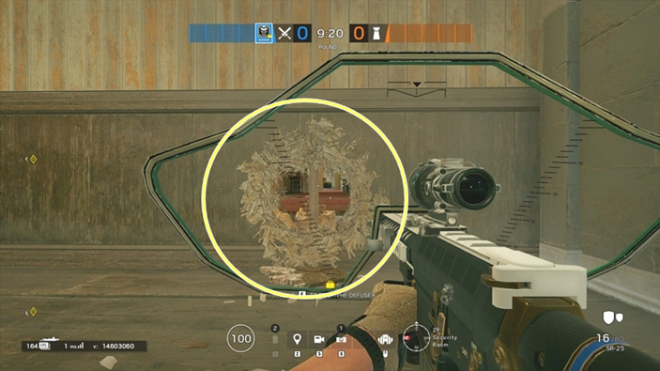 ▲ Or make a small hole here to secure the east Main Hallway angle. 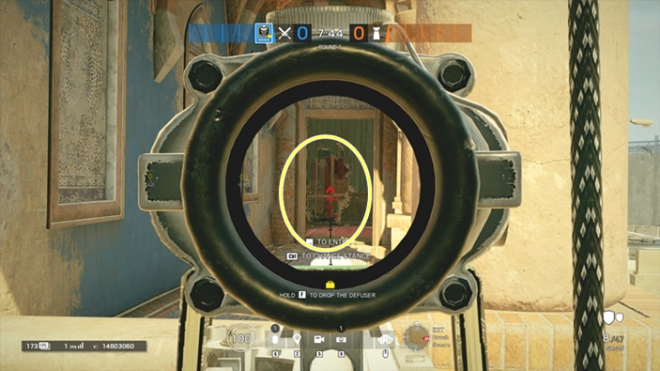 ▲ At the North Balcony, it is possible to check the Archives with a rappel play or to make an angle through the wall with the shooting. 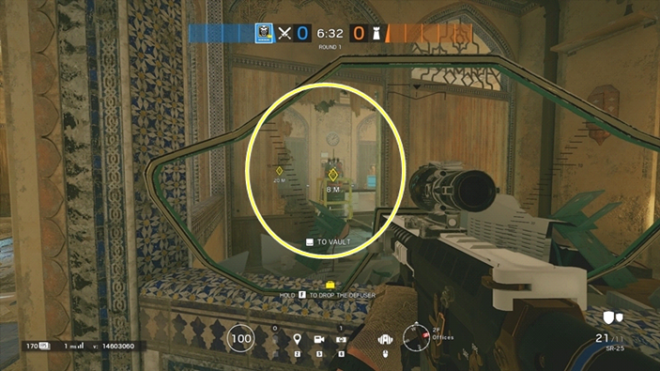 ▲ If you occupy the Offices and the hard-breacher makes an angle on this side, Blackbeard can keep his head out and keep the defensive team in check. 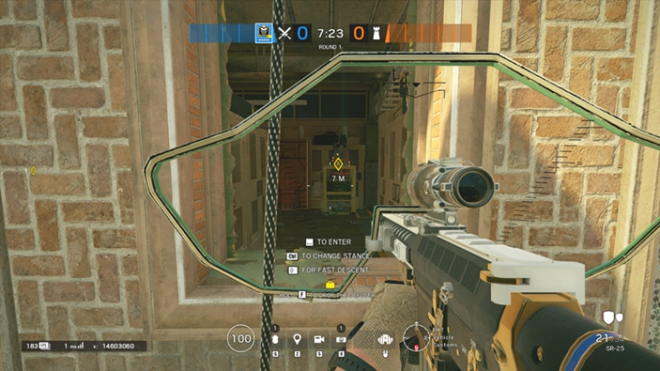 ▲ The North Window of the Armory Lockers is also a good point for Blackbeard.