Guide to playing 'Castle' in 'Kanal'

Kanal is a slightly larger battlefield connected with two two-story buildings. Unusually, the western building consists of a basement and 1F, while the eastern building consists of 1F and 2F, and two bridges connect these two buildings. The outer walls of the two buildings are painted red and blue, respectively, so the western building is called red and the eastern building is called blue.   The Objective Location is located each on the 1F and 2F at the Red Building, each on the 1F and basement at the Blue Building. Because each Bombsite is placed in a completely different location, there is a completely different style of battles for each Objective Location. Usually, the offensive team tries to enter while checking through windows or doors outside the building, while the defensive team must confront the offensive team and induce Roamer to catch the offensive team that entered the building. 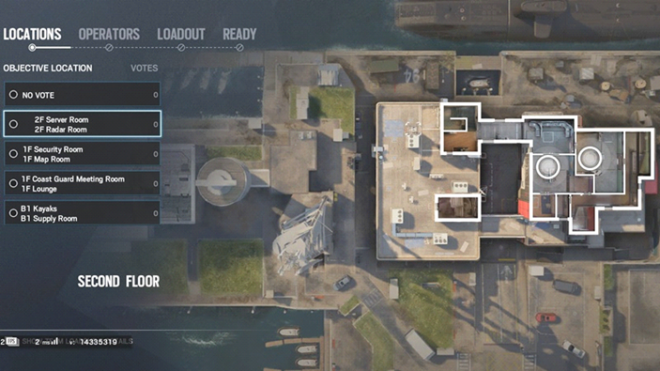 ▲ Kanal's Objective Location, Left Building is called Blue, Right Building is called Red     Castle is an operator that can install Armor Panels that are not pierced with bullets in places where barricades such as doors and windows can be installed. The Armor Panel serves to delay the offensive team and consume the explosives because it is completely destroyed only when explosive burst or 12 close attacks are made. If the Armor Panel is installed in the proper position, it will be able to block the angle that the defensive team inside the building can operate safely and prevent the offensive team from entering.   Because Castle can use a Super Shorty shotgun as a Secondary Weapon, he sometimes takes charge of the Remodel work to make holes in the area around Bombsite or make rotations during the Preferment Phase. If Castle is busy, it's better to get help from other team members because it's only a three-shot shotgun and Castle can't use Impact Grenade since the Steel Wave season. 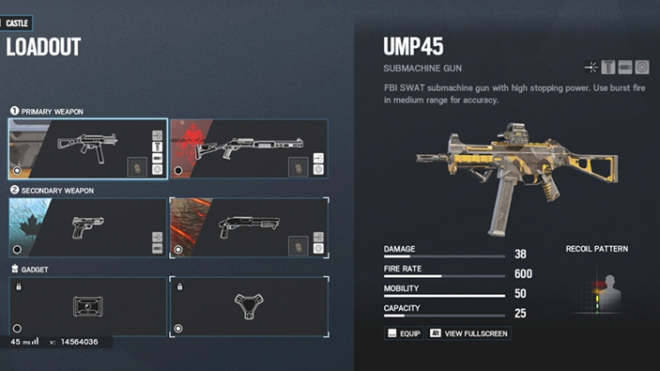 ▲ Castle's UMP45 has a low Fire Rate of 600 but has very low recoil, so you should aim for the headshot as much as possible in combat.     ▣ In case, the site is '2F Server Room ~ 2F Radar Room'   2F is the top floor of the Red building, there is no risk of vertical attacks but a Balcony outside the 2F where the offensive team can stand on. The offensive team will climb up from this Balcony and try to check the inside through windows or doors, or breach the reinforcement wall of the Renovations, which is connected with the Radar Room. As this reinforced wall is particularly important, the defensive team uses Bandit, Kaid, and Mute.   There are windows in the Balcony that lead to Control Room Hallway or Server Room Corridor, through which the offensive team often checks the inside of Bombsite, so it would be good to block the angle with the Armor Panel. However, let's assume that the offensive team would destroy the Armor Panels anyway even we install those at the windows.   In some cases, the offensive team attacks through the red building window from the roof of the blue building, or enter the Printer Room on the 2F of the blue building and take a bridge to attack. If there is Castle, he can block the angle that can be attacked with Armor Panels, or block the printer room window and wait for the Armor Panel to burst. 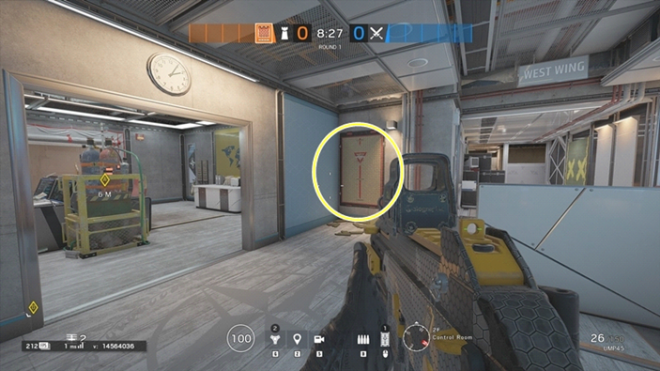 ▲ The offensive team often attacks through this window from the Blue building, so it would be good to block them with Armor Panels. 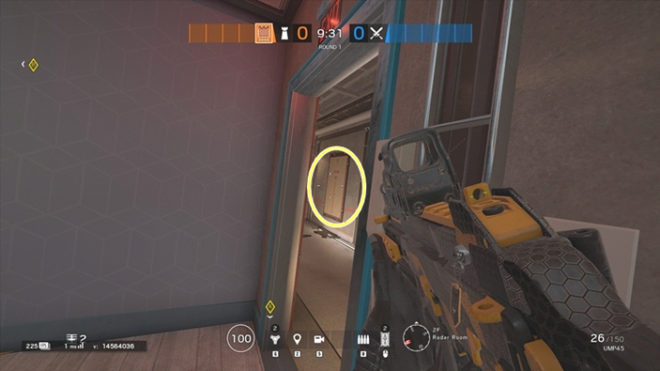 ▲ One of the most frequently used angles of the offensive team, it is good to block it with Armor Panel, but we need to assume that it will soon be breached. 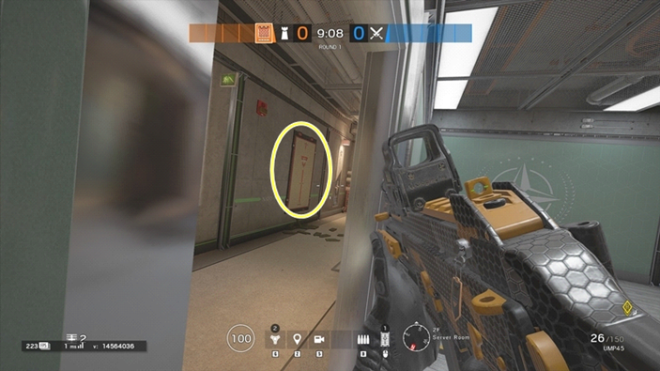 ▲ Remember, there's another window the same as above on the Server Room side. 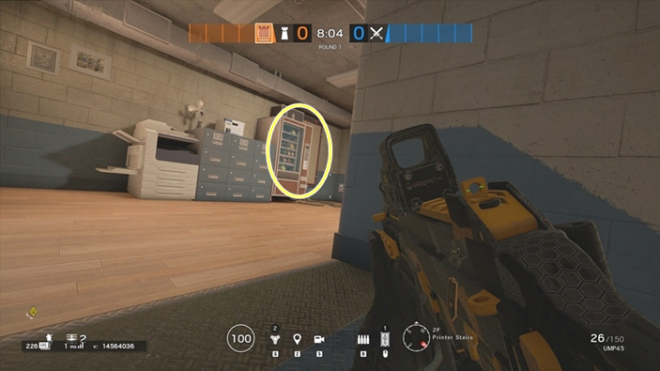 ▲ The printer room on the 2F across the bridge, the offensive team often tries to enter through this place. 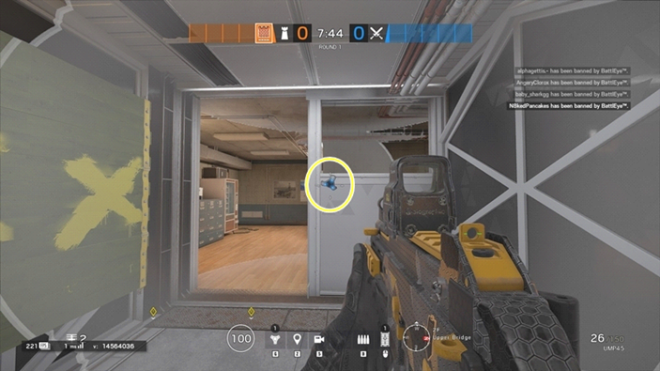 ▲ It would be good to deploy the Proximity Alarm to detect the offensive team entering through the Bridge.     ▣ In case, the site is '1F Security Room ~ 1F Map Room'   It’s right below the Radar Room ~ Control Room Bombsite described above, so vertical plays are done quite a lot here. This Bombsite is particularly vulnerable to attacks from the top, as there are even three hatches on the 2F. Thus, it would be better to employ more than one Roamer and place them upstairs.   There aren't many places for Clash to install Armor Panels on the 1F. Blocking the entrance to each Bombsite is not a good choice because it can interfere with the allies' course, and the windows don’t have such a good angle that the offensive team rarely uses it. Therefore, it may be better to install the Armor Panels on the 2F. Install the Armor Panels similar to those above, and identify the offensive team location by the breaching noise. 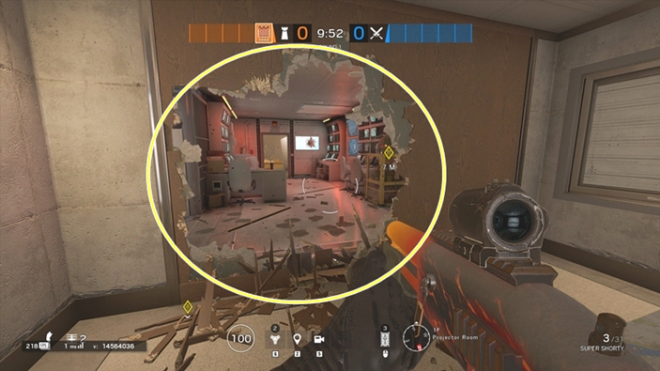 ▲ Let's break the wall of the Security Room at the Projector Room and let the team pass by. 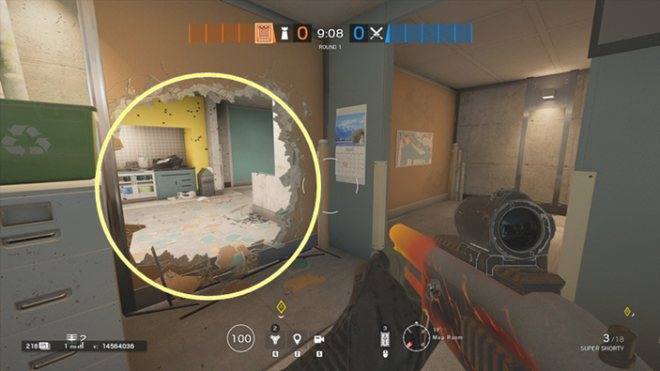 ▲ It is recommended to pierce the wall of the Kitchen side at the Map Room and use the map widely. 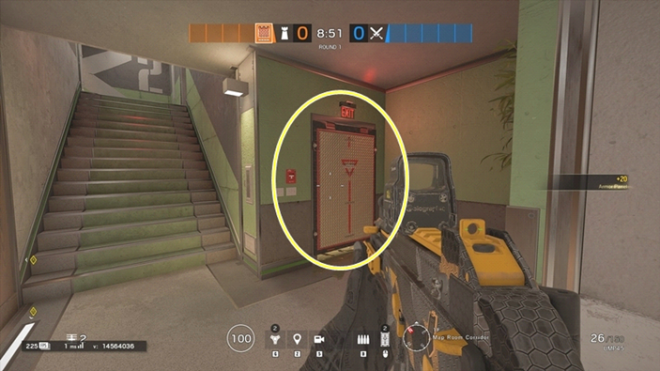 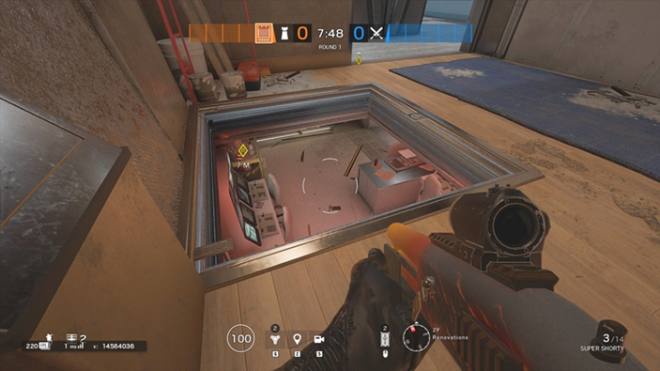 ▲ Since there are three hatches connected to Bombsite on the 2F, it must be strengthened and protected. 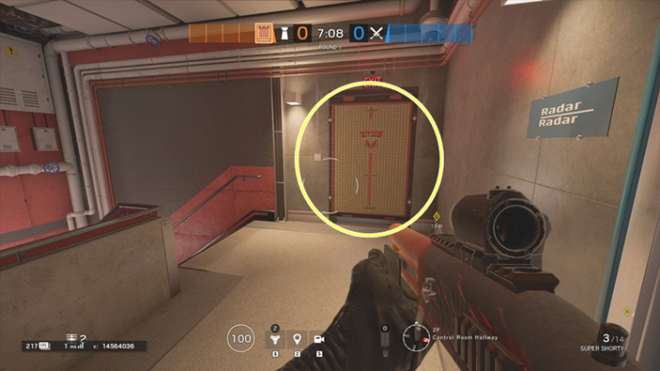 ▲ It would not be a bad idea to put Armor Panels to block multiple doors and windows leading to the 2F.     ▣ In case, the site is '1F Coast Guard Meeting Room ~ 1F Lounge'   Bombsite is located on the 1F of the Blue Building, which is practically the top floor of the Blue Building as the 2F is the Coast Guard Roof. Because of this, usually, the offensive team will try to enter the 1F Recession and move toward the Archives or the Radio Room Hallway, or check and enter through the windows on the outer wall of the building.   Also on the 2F, there is a Printer Room connected to the Upper Bridge where vertical plays can be played to the Lounge on the 1F after breaking the floor, and the offensive team can penetrate the 1F by taking down the Blue Stairs right next to the Printer Room. As this place is where the offensive team launches attack easily, about one of the defensive teams needs to keep an eye on here. It is also a good choice for Castle to install Armor Panels in the Printer Room window. 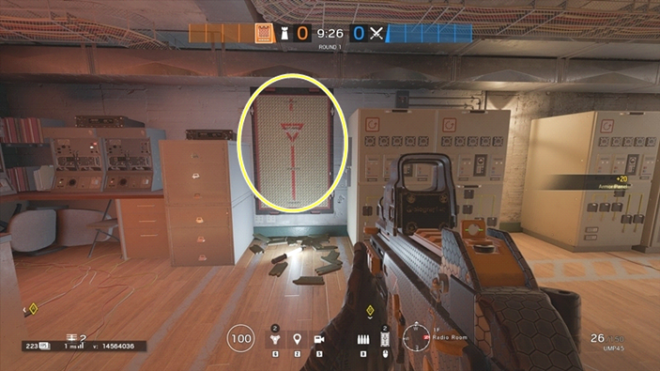 ▲ Radio Room exterior windows are often used by the offensive team, so it would be helpful to block them with Armor Panels. 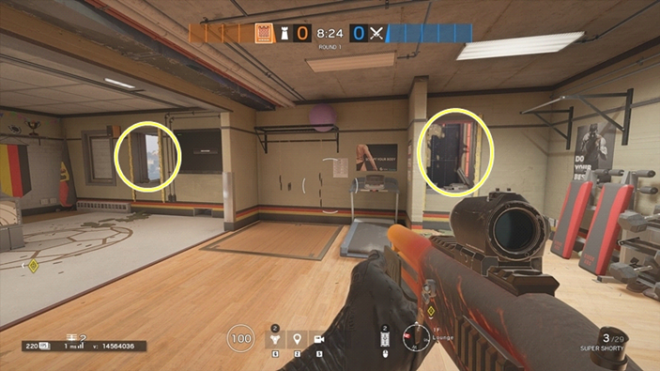 ▲ The lounge has two windows that lead to the outside, so it is vulnerable to rappel plays. 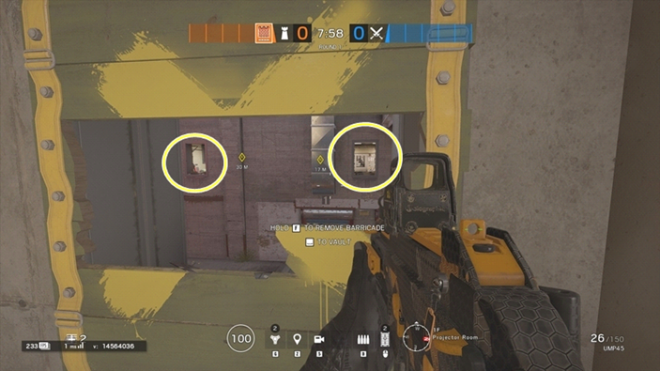 ▲ If the offensive team does rappel plays, you can capture them at the opposite building Projector Room window. 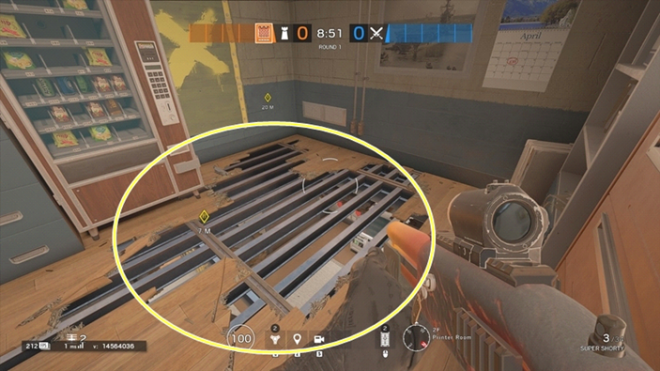 ▲ Vertical plays can be done even at the 2F Printer Room, so it would be very dangerous if attacked from multiple angles. 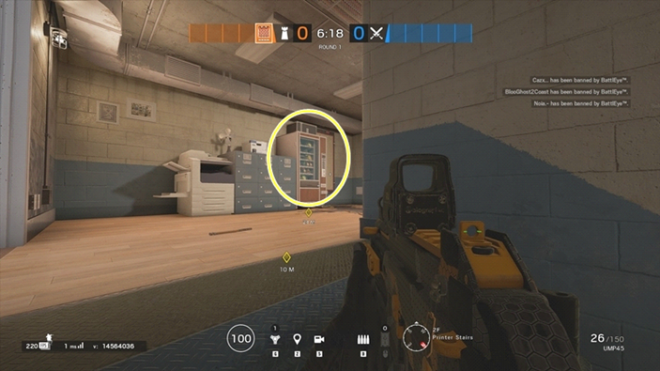 ▲ Same as blocking the 2F of the Red building, install Armor Panels on the windows to block it. 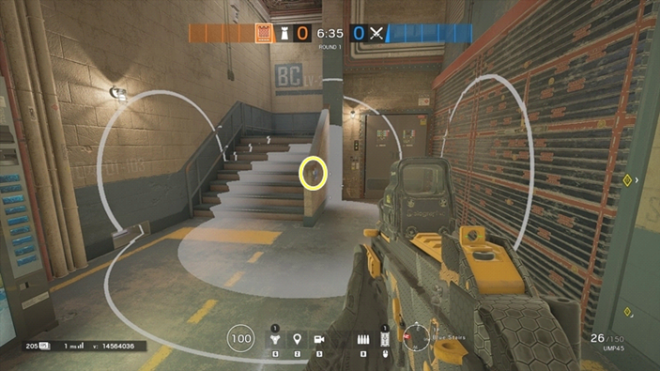 ▲ Hide under the Yellow Stairs and when the offensive team is detected by the Proximity Alarm on the Lounge wall, let's launch a surprise attack. 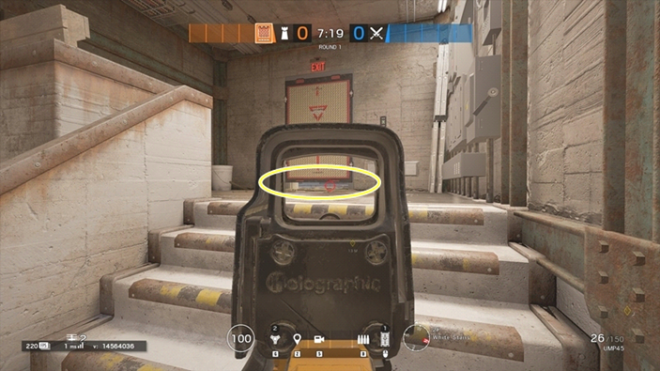 ▲ Block the 2F White Stairs door with Armor Panels and shoot the approaching offensive team's foot.     ▣ In case, the site is 'B1 Kayaks ~ B1 Supply Room'   It is the bottom floor of the Blue building, a closed place with no windows, doors, or walls that lead to the outside in the Bombsite. However, this place is also vulnerable to vertical plays because Bombsite is located just below the Coast Guard Meeting Room described above and there is a hatch that leads to the underground. In addition, the attacking team's hard-breacher often tries to breach the walls of the Pipes just next to the Supply Room.   If you are defending on the 1F, it is good for Castle to install Armor Panels in windows or doors that can enter the 1F from the outside. In particular, the effective area is the window leading from the Diving Alcove to the Diving Room or Locker Room, where if the Armor Panel is installed and exploded due to the offensive team's explosives, the noise will allow you to get the location of the offensive team. 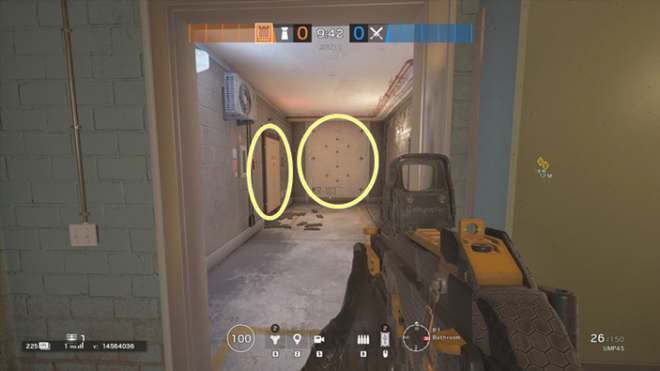 ▲ The hard-breacher will come to breach through the reinforced wall leading to the underground Pipes. There should be members to stop this in the Bathroom. 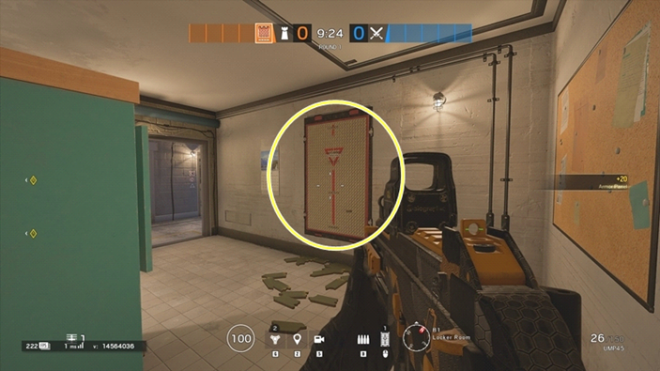 ▲ Install the Armor Panel at the Locker Room window on the Diving Alcove side... 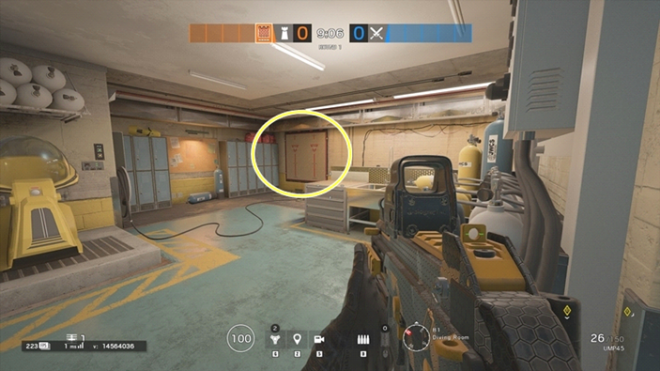 ▲ And it is perfect to install another one at the Diving Room window on the Diving Alcove side. 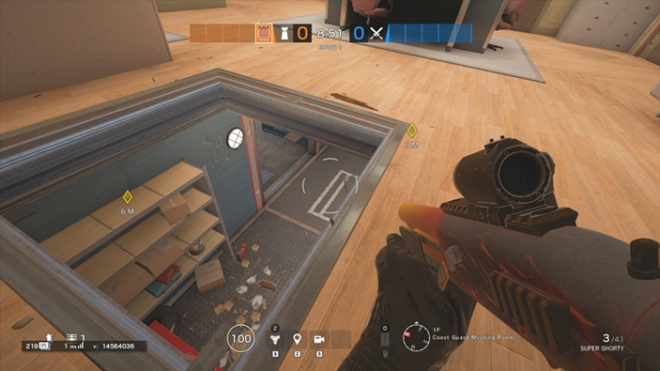 ▲ Be careful as the offensive team can try vertical play or hatch drop on the 1F. 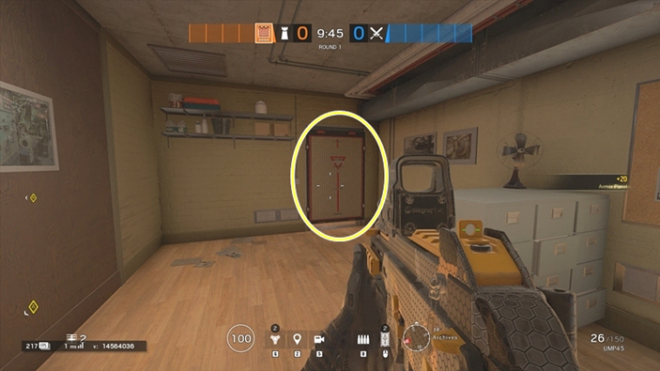 ▲ Because of this, it is not a bad choice to install Armor Panels on the 1F and block them.   *Thanks for the follows! (ups and comments too)