Guide to playing ‘Fuze’ in ‘Oregon’

Oregon is a medium-sized battlefield consisting of a basement, 1F and 2F. Got reworked in the Void Edge season, there were big and small changes, including the disappearance of the two-story Bombsite at the Big Tower and the addition of a new offensive route to the underground Bombsite, which had previously been advantageous for the defensive team. As a result, the map balance has been adjusted and more diverse aspects of engagement can be seen.   The Objective Location is located one on the 2F, two on the 1F and one on the underground. It is characterized that both Objective Locations on the 1F use Kitchen as Bombsite, and Kitchen is mostly the main target point when the offensive team attacks the 1F. Most Bombsites can be checked through windows that lead to the outside, so defensive teams usually prefer the basement because there are no such angles in the basement. 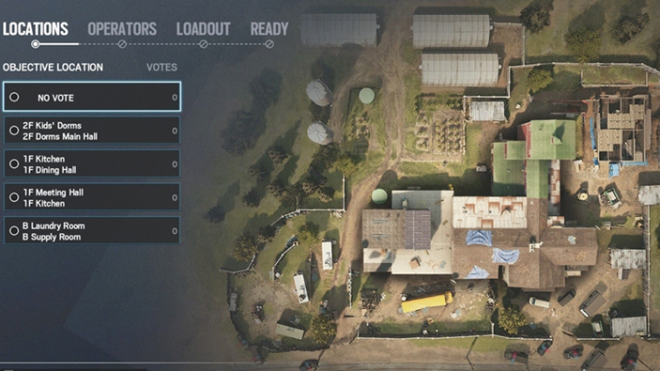 ▲ Reworked Oregon's Objective Location, the basement or 2F is often chosen rather than the 1F.     Fuze is an operator that can detonate beyond a wall or floor using his dedicated equipment, Cluster Charge. A total of five stray bullets will be fired across if they are set up and fired on a destructive wall, floor or barricade, which cause explosive damage in a wide range, enabling the removal of defensive team gadgets at once. In addition, if lucky, it would be possible to catch an operator of the defensive team who could not avoid the stray bullet. Because of this, Fuze has a strong presence in vertical play, especially in Oregon, which has a lot of places to do vertical plays from the 2F to the 1F.   Fuze is also an operator notorious for its powerful firepower on all Primary Weapons. In particular, the Assault Rifle AK-12 is on of the highest-performing rifles of all offensive teams, and only Fuze and Ace can handle AK-12. Thanks to this, Fuze is also possible to play the role of Entry Fragger, who actively engages with the defensive team on the front line. 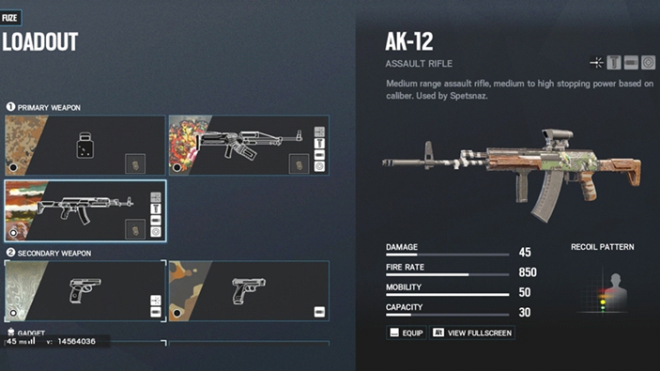 ▲ AK-12 is one of the top guns in the offensive team, and only Fuze and Ace have a choice. 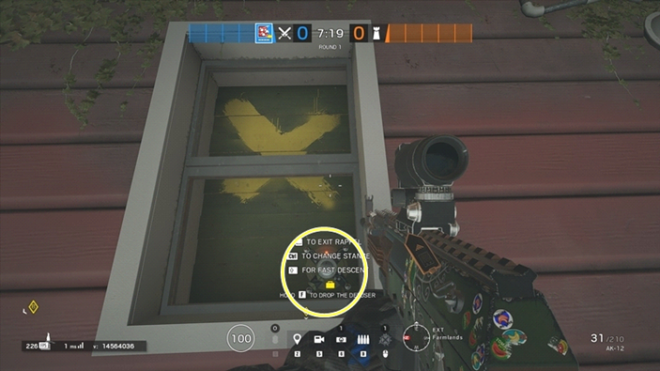 ▲ When installing Cluster Charger on barricades, it is more effective to install them on top of the window with the body turned upside down while rappelling.     ▣ In case, the site is '2F Kids' Dorms ~ 2F Dorm Main Hall'   Since Bombsite is placed on the 2F, it is not possible to do vertical play upstairs, but there are many windows connected to the outside around the Bombsite, making it easy to check. Especially, it is good have a member to go up to the Dining Hall Roof on the 2F, break the large window on the Dorm Main Hall to keep the inside in check and maintain the confrontation.   As there are no suitable walls or floors for Fuze to install Cluster Charges, so they must be installed mainly on window barricades. However, if you install it on a barricade, you should be careful because the defensive team can shoot at the window when they hear the Cluster Charger being installed. In addition, Cluster Chargers must be set up at the upper-side of the window if possible to spread the stray bullets wide, as they bounce off the floor and explode after a certain period when fired.   If you removed the gadgets inside the building with Cluster Chargers and drove out the defensive team, you'd better try to enter boldly. As mentioned above, Fuze is an operator who can engage actively with AK-12's powerful firepower. 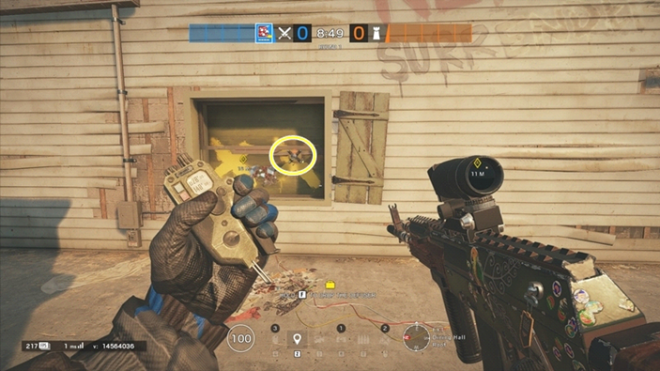 ▲ Before you open the window, if you use Cluster Chargers to clean up the surrounding gadgets... 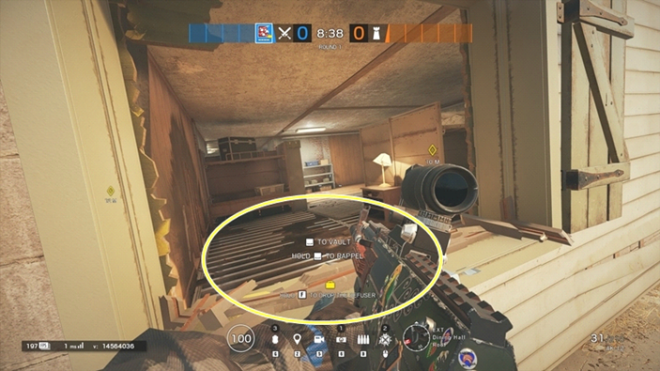 ▲ The gadgets around the windows are destroyed, making it easier to check or enter. 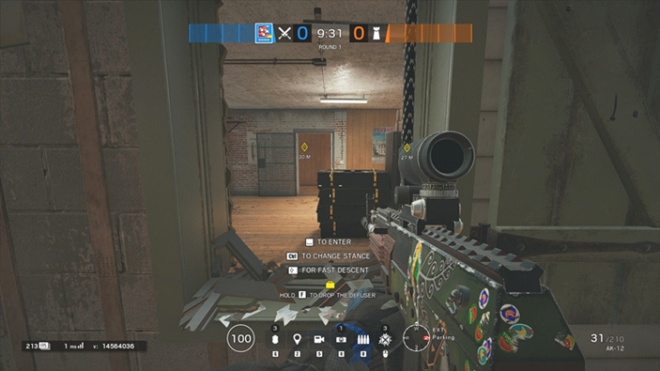 ▲ It’s also good to enter the Armory window on the 2F and start the attack. 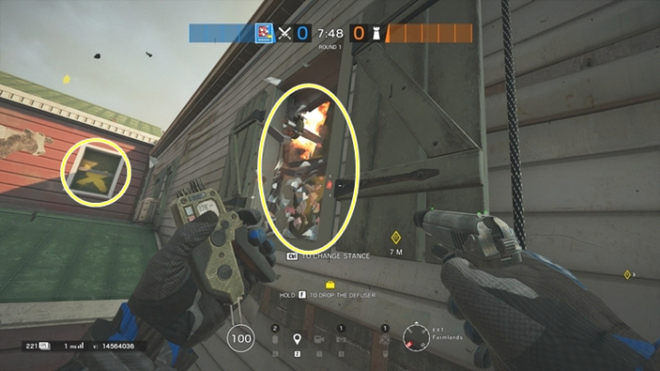 ▲ It is possible to check through the Northern Kids' Dorms window, but be careful not to be checked from the Attic window. 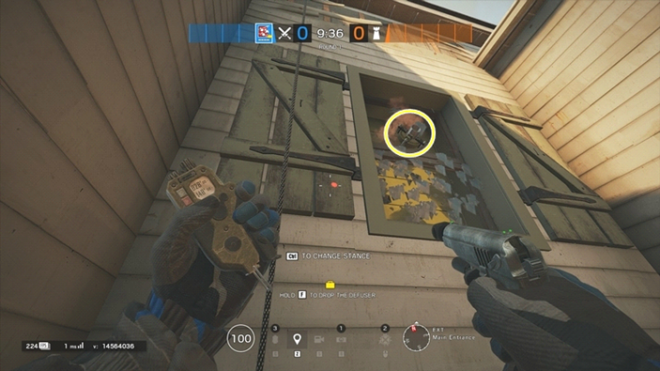 ▲ If you set up a Cluster Charger on the south side of the Game Room and fire it... 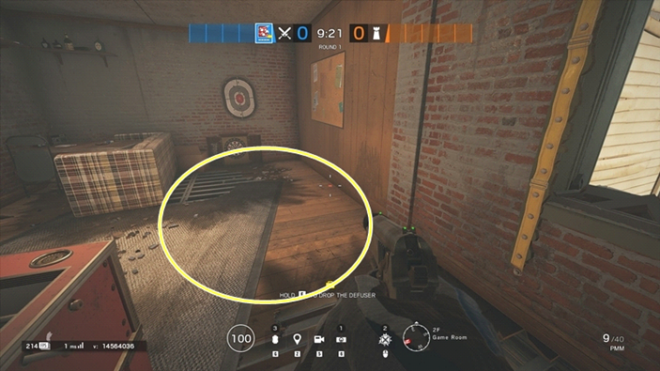 ▲ You can destroy all the gadgets behind the Master Bedroom Walk In reinforced wall at the Game Room.     ▣ In case, the site is '1F Kitchen ~ 1F Dining Hall'   The Objective Location is placed in the center of the 1F, so it will be effective if some of the offensive team will launch the attack around the Small Tower in front of the Dining Hall, while the other team members enter the Big Tower or Meeting Hall and attack the Kitchen.   To target the Dining Room, it is recommended to first spawn at the Junkyard and then enter through the Small Tower. Sometimes the defensive team Roamer lurks in the 2F Small Tower Office and hits the back of the offensive team entering the Dining Hall, and to prevent this situation, the offensive team must first completely clear the 1F and 2F of the Small Tower. Once the Small Tower Office has been cleared, Fuze can install the Cluster Chargers on the floor here and remove the defense gadgets behind the wall of the Small Tower.   In addition, there are many other attack routes, such as breaching reinforced walls of the Kitchen with team’s hard-breacher at the Meeting Room or doing vertical plays at Kids' Dorms on the 2F, so let's try to attack according to the situation. 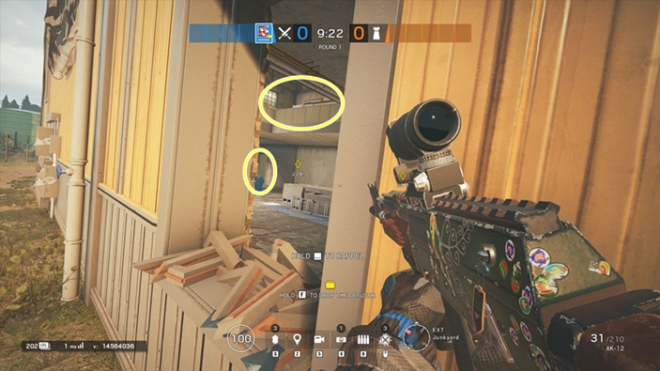 ▲ Spots to be careful when opening the Small Tower window, the defensive team may be keeping an eye on the window here. 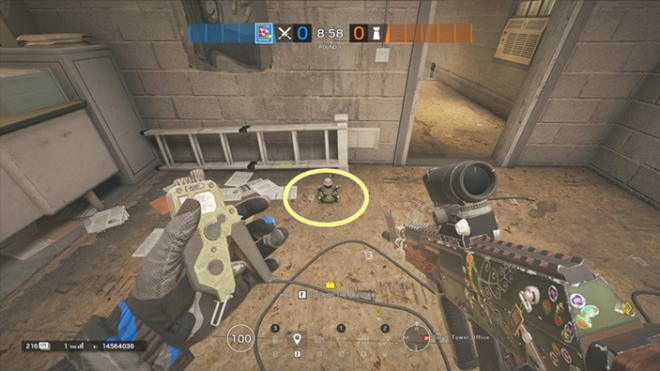 ▲ If you occupy the Small Tower Office on the 2F and detonate a Cluster Charger at this location, you can destroy the gadgets on the Dining Hall. 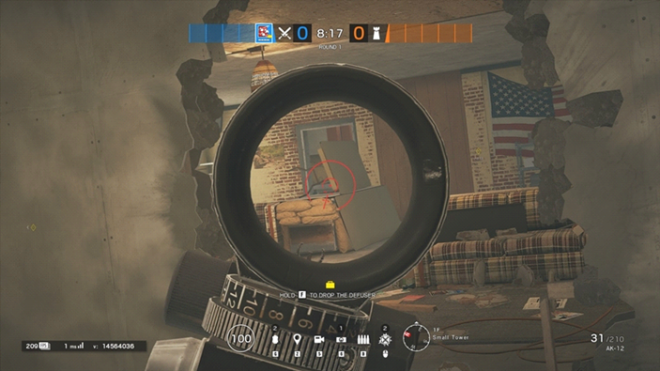 ▲ If you have breached the Dining Hall reinforced wall, we can easily occupy Bombsite. 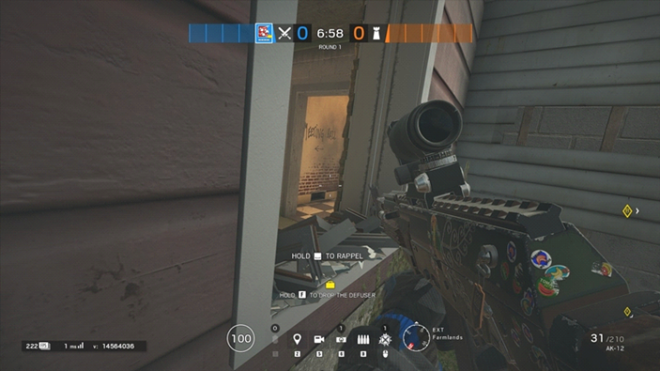 ▲ You can access the Kitchen directly from the Kitchen Corridor through the outside window. 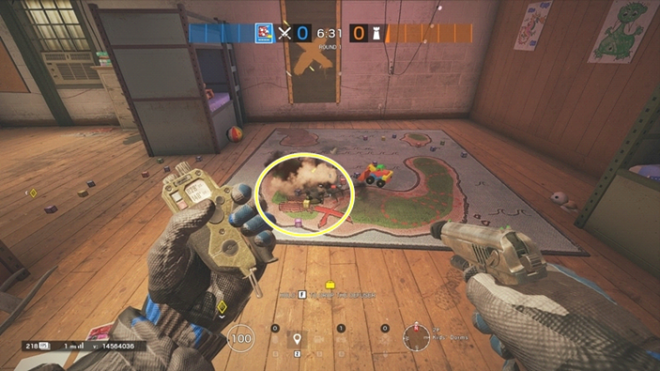 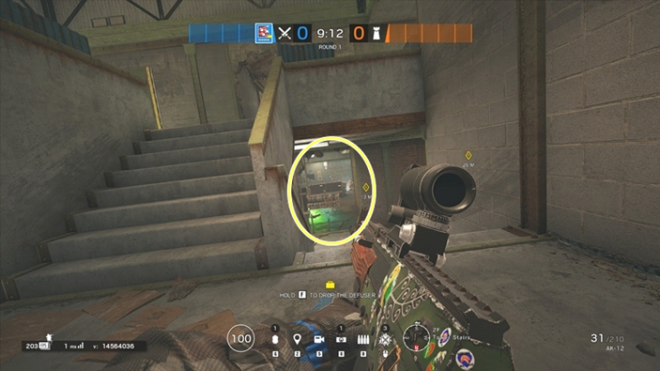 ▲ If your team has a hard-breacher, you can breach and check through the wall of the Meeting Hall at the Big Tower. 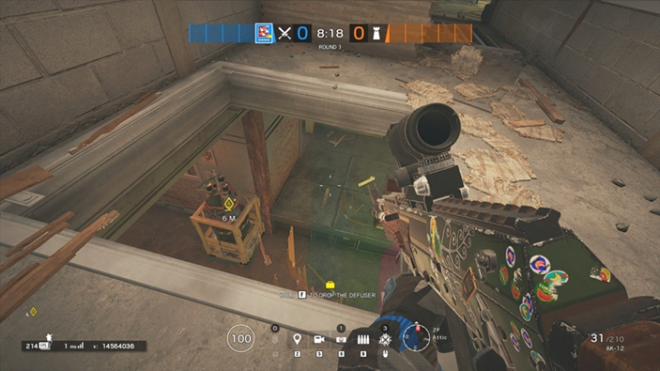 ▲ If you've opened the 2F Attic Hatch, there's almost no place for the defensive team to hide in the Meeting Hall. 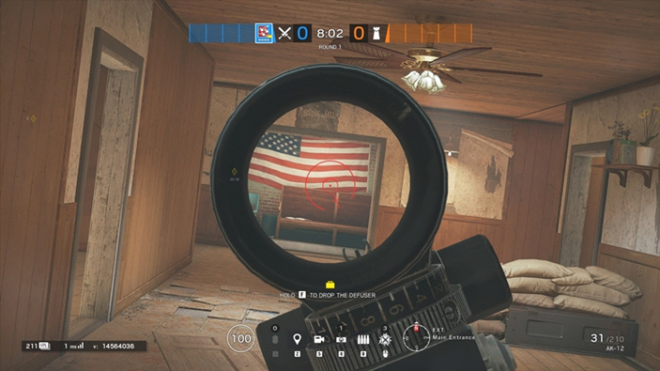 ▲ Entering from the Lobby on the 1F, you will be able to catch the defensive team hiding in the Split on the Meeting Hall. 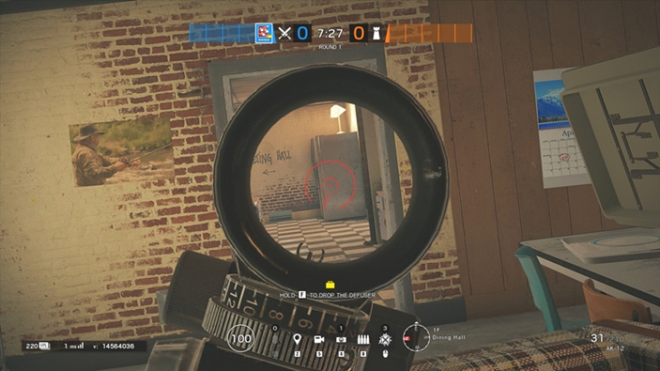 ▲ If the reinforce is concentrated in the Meeting Hall, it is highly likely that the defense on the Dining Hall will be poor.     ▣ In case, the site is 'B Laundry Room ~ B Supply Room'   The basement is an objective location favored by the defensive team as a closed structure with no windows or doors to the outside. Unlike before, however, the new stairway from the 1F to the underground Freezer has increased the attack routes, making it not such a hopeless place for the offensive team.   Bombsite has been placed underground, but the floor on the 1F, just above the underground Bombsite, is made of non-destructive material, making it difficult to do vertical plays on the 1F. If there is a hard-breacher on your team, it would be nice to breach the hatches of the Meeting Hall and Lobby and launch an attack up here, but there's not much thing Fuze can do alone.   Often, the offensive team rush here by entering the Blue Bunker, which is close to Bombsite, through the Bunker at the Construction Site spawn. If there is a hard-breacher, you will be able to breach through the reinforced walls here and reach the Supply Room right away. In this case, it would be good for Fuze to engage with the defensive team that is guarding Blue Bunker using AK-12. 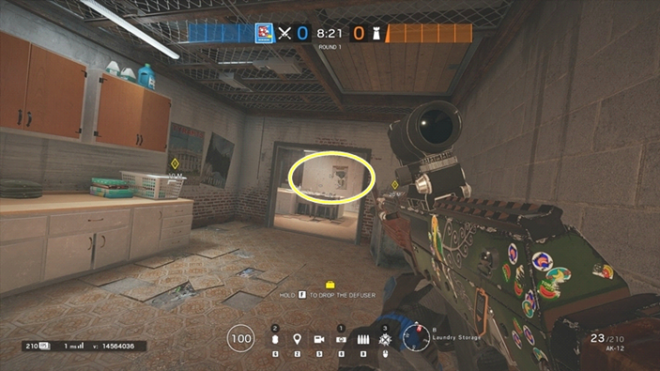 ▲ After you come down on the Laundry Stairs, it is no longer possible to enter if Mira's Black Mirror is installed at that location. 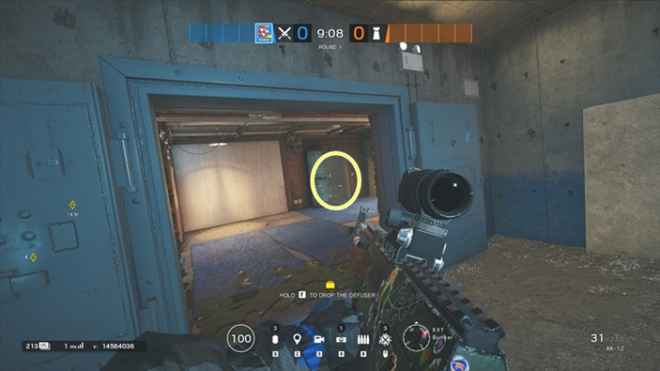 ▲ You can enter the Blue Bunker from the Construction Site, but be aware that there may be a defensive team at the marked location. 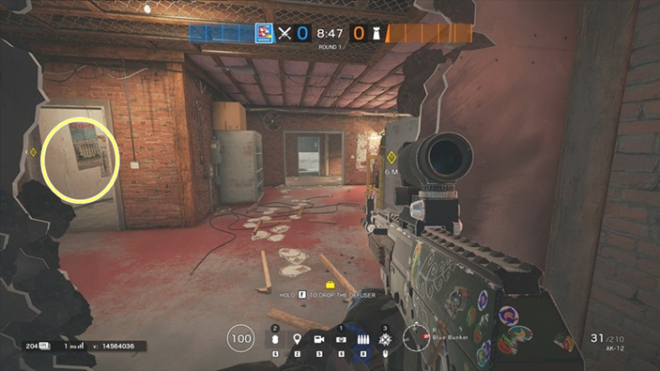 ▲ If the team have succeed breaching here, the Supply Room is just around the corner. A very effective angle as the Black Mirror is frequently installed in the marked area. 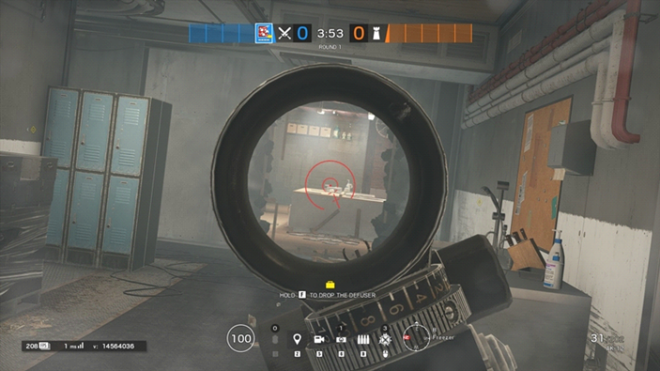 ▲ It's also a good idea to use the newly added route to the Freezer.