Guide for playing 'Buck' on 'Outback'. 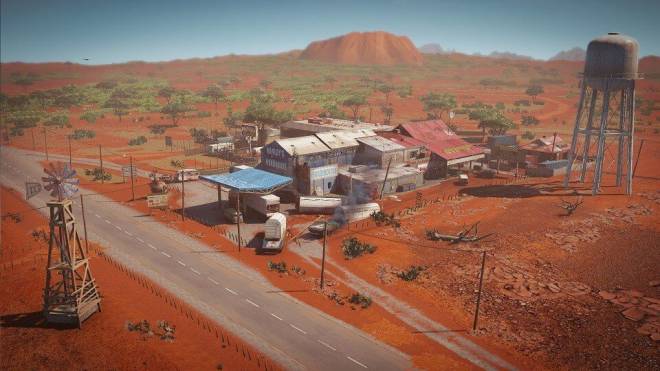 Outback is a double-level map (consisting of two floors) found only in ranked play. The current architecture gives a significant advantage to the defenders due to there being limited second floor access points. Although, an argument could be made for this being mitigated by the vertical advantages given to the attackers on the ground floor bomb sites. Buck is a two armor, two speed attacking operator. His ability is known as the ‘Skeleton Key’ which is a mini shotgun attachment placed on the bottom of the operator's primary weapon. Buck is a soft-breacher and is used to destroy obstacles like un-reinforced walls and flooring as a method of providing the attacking team with dynamic angles that can be used to eliminate defenders as well as defending utility. The operator is similar to Sledge as a soft-breacher although Buck is unique in that the operator has the ability to destroy the ceilings from the ground floor. This is an incredibly valuable advantage as it provides attackers with the ability to destroy the flooring underneath defenders on certain second floor bomb sites. If you are to be in accordance with the current meta, Buck’s loadout should be as follows: PRIMARY: C-8 ASSAULT RIFLE (Attachments to player preference) SECONDARY: MK1 9MM (Attachments to player preference) UTILITY: FLASHBANG GRENADES   OUTBACK SPAWN LOCATIONS: 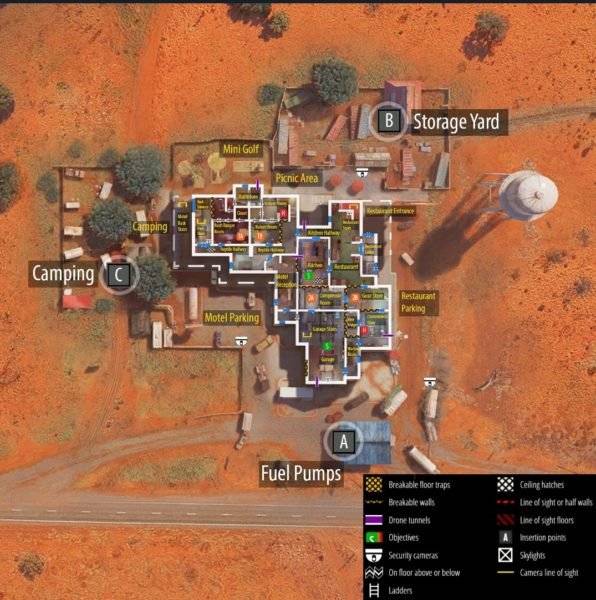 ATTACKING: [2F] LAUNDRY(A) - GAMES(B) The primary route of attack on this bomb site will be by the attacking team entering the building through the top of Garage and the Shark Stairs second floor window. After establishing control over all second floor rooms east of Games(B), the attacking team will proceed to breach the reinforced wall between Mechanical Bull (Bull) and Games(B) as this will provide attackers with a direct route to plant the defuser inside of the Games(B) bomb site. Due to the second floor Dorms room commonly being under a large amount of contention, Buck will provide attackers with a unique advantage over the defenders inside of Dorms and Yellow stairs by breaching the objective building through the Back Entrance. After establishing control over Back Entrance and Nature Hallway, Buck will use his Skeleton Key to breach the first floor ceilings which will effectively expose defenders inside of Dorms and Yellow stairs. This will also provide Buck with the ability to eliminate any defender utility (like a Jager Trophy System or Mute’s Electronics Jammer) inside of Dorms. Being able to eliminate defenders' utility inside of Dorms will provide attackers with a definitive advantage. After assisting teammates establish control inside of Dorms, Buck can then reposition to the bottom of Piano stairs and essentially repeat the process underneath Piano. POSITIONING: [2F] LAUNDRY(A) - GAMES(B) 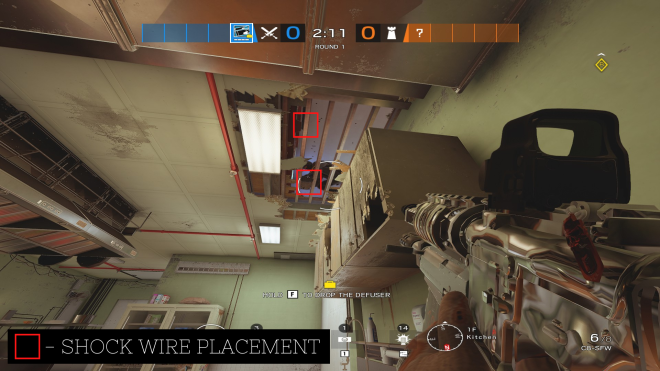 ATTACKING: [2F] PARTY(A) - OFFICE(B) The primary route of attack on this bomb site will be by the attacking team essentially executing the inverse attack plan used on the previous bomb site; the only difference here being over which rooms attackers need to establish control over. To ensure protection from any possible flanks, attackers should clear all second floor rooms west of Mechanical Bull and Shark Stairs and place some type of flank protection on Shark and Yellow Stairs. Bucks primary role on this bomb site will be to establish attacker control over the first floor Restaurant, Kitchen, and Gear. These three rooms will prove to be essential for a successful attacking round for two primary reasons: 1) Buck will be positioned to breach the flooring of both bomb sites as well as adjacent rooms like Mechanical Bull and Storage, 2) Maintaining control over the first floor will prevent defenders from being able to use nitro-cell underneath attacker positions. After assisting teammates in establishing full control over the second floor Mechanical Bull, Buck can then reposition to the first floor portion of Garage and use the Skeleton to breach the flooring underneath commonly held defensive positions. This will force defenders to divide their attention from the attacking teams primary assault inside of Games and Mechanical Bull. POSITIONING: [2F] PARTY(A) - OFFICE(B) 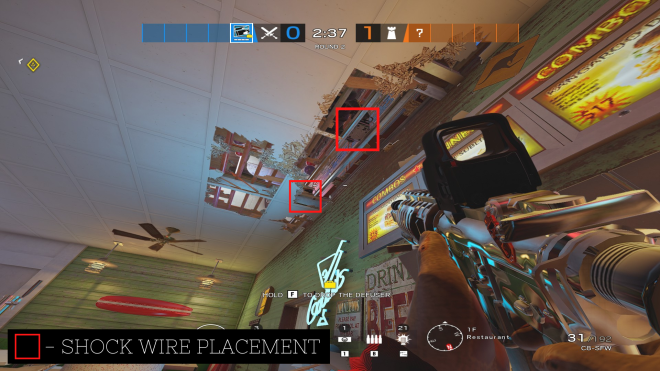 ATTACKING: [1F] NATURE(A) - BUSHRANGER(B) The primary route of attack on this bomb site will be by the attacking team entering the building through the first floor Yellow Stair doorway located on the west of the building near the ‘Camping’ spawn location. After establishing control over the Nature Hallway and top of Yellow Stairs, attackers will breach the reinforced wall separating Nature Hallway and BushRanger room. Attackers will commonly send a few soft destructors like Buck, Sledge, or Zofia to the second floor to destroy the flooring of of Laundry and the adjacent hallways as this will expose defending anchors inside of Bushranger(B) and Nature(A) to vertical angles. Buck will add the most value to the attacking team by assisting teammates in establishing full control over the second floor Laundry and Piano. This will provide attackers like Buck, Sledge, Zofia, and Ash with the ability to completely destroy the ceiling of both bomb sites as well as the Bathroom connector room. Buck will be optimally used if he stays on the second floor, above the bomb site, so as to consistently maintain vertical pressure on defensive positions while the bulk of the attacking team establishes control inside of Nature Hallway; adding horizontal pressure onto the defenders playing inside of Nature(A) and Bushranger(B). POSITIONING: [1F] NATURE(A) - BUSHRANGER(B) 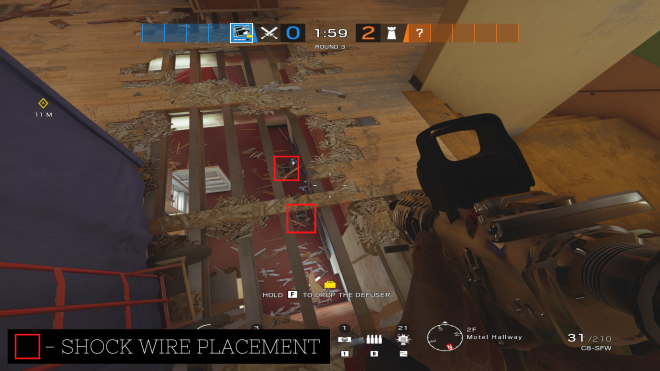 ATTACKING: [1F] COMPRESSOR(A) - GEAR(B) The primary route of attack on this bomb site will be by the attacking team entering the building through the top of the 2F Garage (accessed through the west and east single windows) and through the 1F Main Entrance (accessed through the mud room double-doorways on the east of the building). After establishing the necessary control over Restaurant and Kitchen, attackers will breach the reinforced wall separating Kitchen and Compressor(A). Buck will provide the largest amount of value to the attacking team by prioritizing control over the second floor Mechanical Bull, Party, and Office. Maintaining control over the second floor is going to be the definitive advantage attackers have for a successful round on this bomb site. Defenders typically understand this and, as a result, place a very large amount of resources into the defense of the second floor. On some occasions, defenders will place such a large amount of man power and utility on the second floor that it makes the most sense for attackers to instead rush the bomb site from an overlooked route of attack like that of Lounge or Restaurant. In fact, this can serve as good advice for player development: Always look at the entirety of the battlefield and determine the optimal route of attack to take BEFORE taking action. There is typically an alternative route of attack with much less resistance that is available to attackers - usually, all you need to do is stop and look. POSITIONING: [1F] COMPRESSOR(A) - GEAR(B) 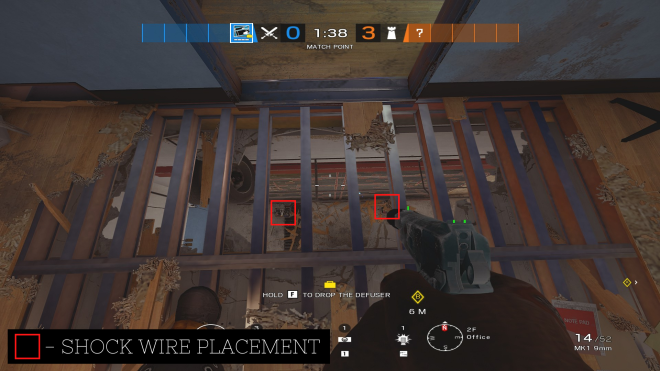