Theme Park is a medium-sized battlefield consisting of only 1F and 2F. During the Shifting Tides season, there was a map remake, resulting in a slight reduction in the size of the battlefield and changes in the structure of the building. Same as before, the Objective Location is located two on the 2F and two on the 1F, of which the 2F Bunk ~ Day Care and 1F Lab ~ Storage has not changed much, while the east side of the building on the 1F Armory ~ Throne Room and 2F Initiation Room ~ Office are entirely new.   There are many windows on the outer wall of the building, so it is also a place where defensive teams often try spawn kills or run-out plays. For this reason, it would be better for the offensive team to prepare Claymore Mine or use an operator like Nomad who can respond to the run-out play. Of course, the offensive team can use these windows to check the inside of the building from the outside, so let's make the right use of them. 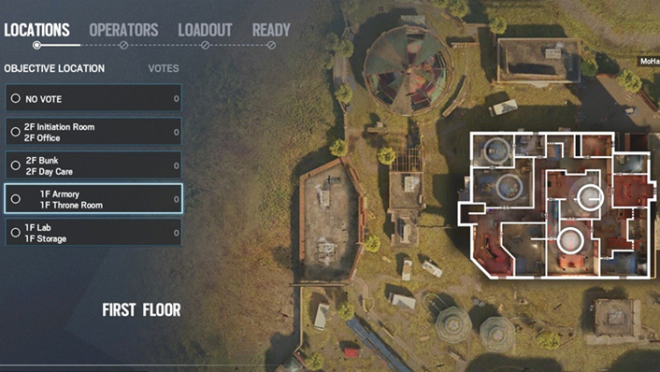 ▲ The 1F Armory ~ Throne Room has only a few offensive team route and needs to create a new angle with the hard breacher.     Thatcher is an operator that can use EMP Grenade as a dedicated equipment. The EMP Grenade is a throwable equipment that can destroy or neutralize all electronic equipment of the defensive team within the range, so it is good to use it where defensive team equipment is expected to be concentrated. In particular, EMP Grenade can easily destroy Shock Wire and Electroclaw installed behind the reinforced wall, which is why Thatcher often works along with the hard breacher and breaches through major reinforced walls on the battlefield.   Thatcher is also an operator with a wide selection of Primary Weapon. However, unlike other S.A.S operators, the combination of M590A1 Shotgun and SMG-11 cannot be used because the SMG-11 Machine Pistol cannot be used as a Secondary Weapon. Perhaps that is why the Assault Rifle AR33 and L85A2 are more preferred. Among them, AR33 can attach Angled Grip, and L85A2 has the advantage of low recoil and stable, so you can choose according to your taste. ▲ Compared to L85A2, AR33 can attach Angled Grip and has a slightly higher Fire Rate with a lower Capacity of 25.     ▣ In case, the site is '2F Initiation Room ~ 2F Office'   Since Bombsite is located in the center of the two-story building, it would be good for the offensive team to enter from both sides of the building and press the Bombsite by surrounding it. Some of the offensive team can go up to the Cafe Entrance in the west and enter through Cafe or Upper Ark, while others use their rappels to get to the Castle Entrance in the east, then enter Cash Stash or Dragon Stairs and press the Bombsite.   If there is a hard-breacher in the team, it would be good for Thatcher to move together with the hard-breacher and assist in breaching work. Usually, it is common to go to the Bunk with the hard breacher and breach through the reinforced wall leading to the Initiation Room, or to the reinforcement wall from Yellow Corridor to Office. If there are no equipment like Shock Wire attached on the back of the reinforced wall or no hard-breacher on the team, use EMP Grenade mainly where the main equipment of the defensive team is installed to support the team. 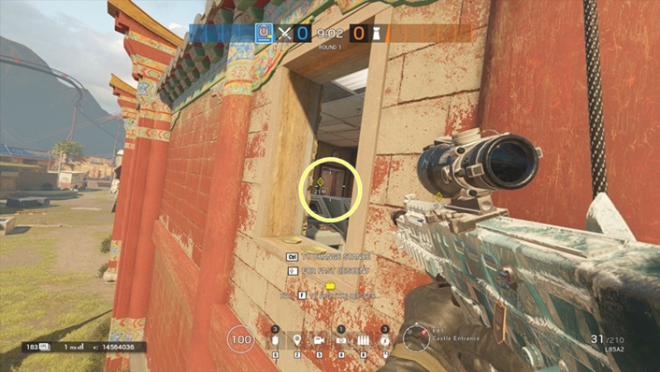 ▲ You can check the Initialization Room through the Control Room window by rappelling on the outer wall of the building. ▲ Right above, there is a hatch that leads to the Control Room, which allows you to drop through it. 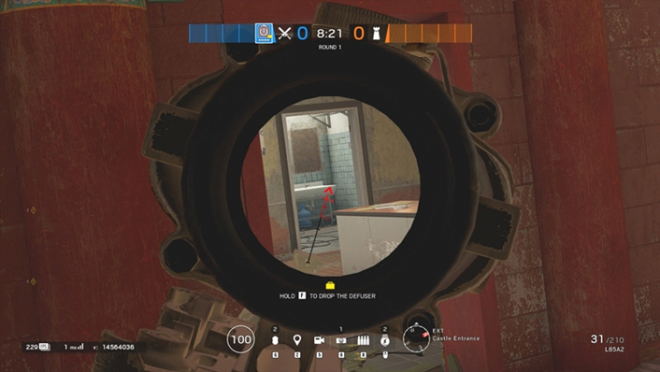 ▲ You can come up to the Castle Entrance and enter the door at the Cash Stash. 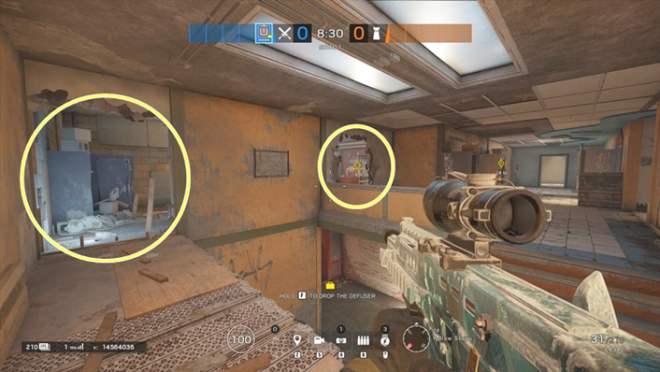 ▲ After entering the Cafe, let's support the hard breacher so that they can break the wall leading from the Yellow Corridor to the Office. ▲ It is also a good idea to try breaching from the Bunk to the Initiation Room.     ▣ In case, the site is '2F Bunk ~ 2F Day Care'   With Bombsite leaning west of the 2F, the offensive team can reach Bombsite immediately once they enter the Cafe or the Upper Arcade. However, it is difficult to enter deeper as the defensive team will counteract them inside the Day Care Bombsite or at the Yellow Corridor, so usually some of the offensive teams enter from different directions and pressure them from both sides.   If the team uses a hard-breacher, Thatcher must enter the Café, check the defensive team and assist breaching the reinforced wall of the Day Care at the Cafe Corridor. In contrast to what was described above, it is also a good idea to breach the reinforced wall leading to the Bunk at the Initiation Room. Doesn’t matter where, let's keep on eye for Roamers from attacking the hard-breacher.   There is also a way to attack through the Break Room window on the southern outer wall of the building. In particular, attacking this area when there is an engagement at the Café, can greatly confuse the defense direction of the defensive team. However, since this place is vulnerable to the run-out play of the defensive team Roamer coming from other windows, it is better to have Claymore Mine installed under the window. 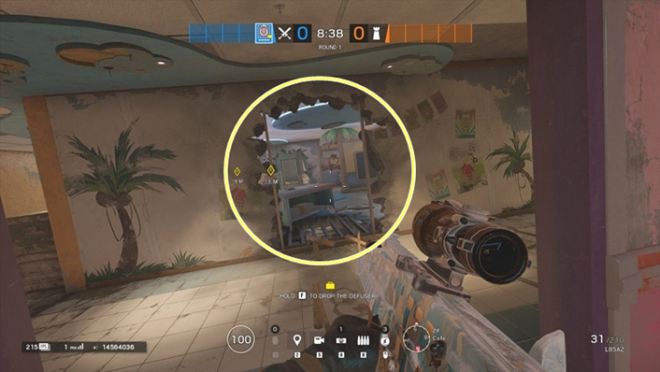 ▲ The primary goal is to break through the wall leading to the Day Care at the Café Corridor, but it won't be easy if there are defensive team hiding on both sides. 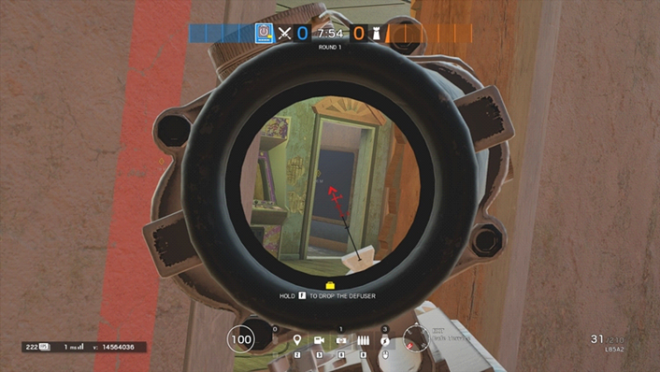 ▲ On the right side, it's good to have at least one person to check from the exterior window of the Upper Arcade. 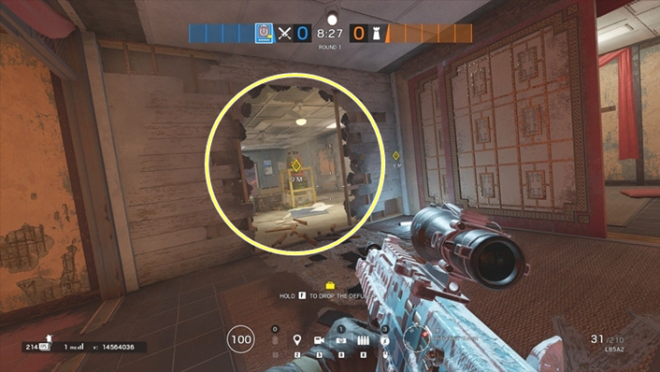 ▲ Or it would be effective to create a new angle at the Bunk from the Initiation Room as opposed to the one above. 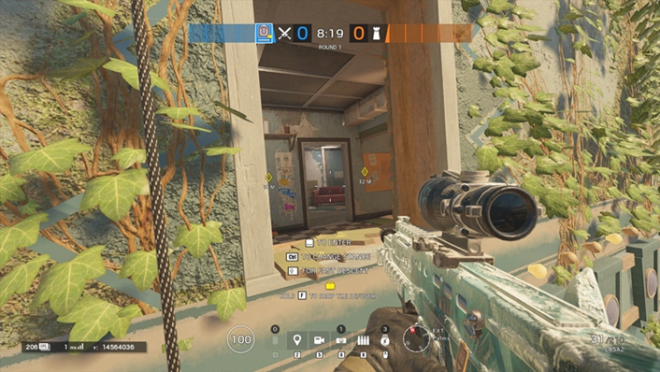 ▲ You can check through the Break Room window hanging on the southern wall of the building with the rappel. ▲ However, there are times when a run-out play is played through these windows while rappelling, so be careful. ▲ It would be helpful to install a Claymore Mine in advance, but since there are three windows, let's always be careful.     ▣ In case, the site is '1F Armory ~ 1F Throne Room'   While the interior space of the Armory ~ Throne Room is large, there is no other way to enter the Bombsite except the entrance, so it is not a bad place for the defensive team to defend. Unlike other Bombsites, there are no windows that can check the inside from outside the building, and there are even no hatches that leads directly from the 2F to Bombsite. Vertical play is possible on the 2F, but this is also limited because the floor of the Initiation Room, which is just above the Throne Room, is made of non-destructive material.   For this reason, it is also a place where it is necessary to create a new angle by using a hard-breacher. There are three locations for the breaching work: Barrel Room, Maintenance, and Yellow Corridor. Among them, the Barrel Room and Maintenance are comparatively safe, so let's move together and support the hard-breacher.   You can do vertical plays towards the Armory at the Office and Waiting Room on the 2F. If Thatcher has the Breach Charge, he can burst here to create an angle. However, it is not that effective if the defensive team hides to the Throne Room side. So, let's just use it to drive out the defensive team hiding in the Armory. 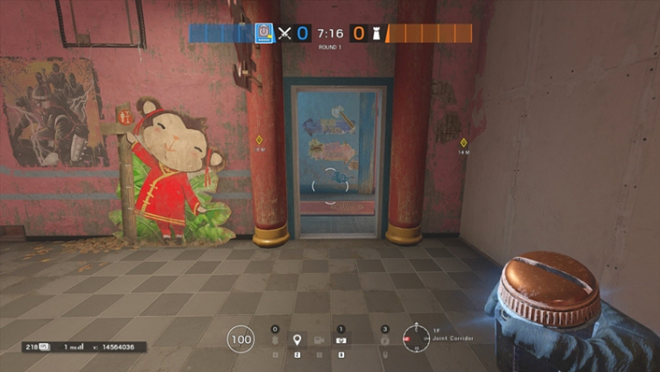 ▲ The Blue Room on the 1F is an entrance shared by both Bombsites and is likely to be equipped with various gadgets by the defensive team. 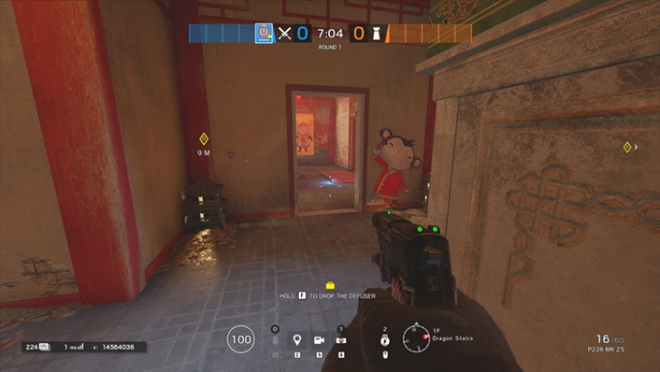 ▲ Same for the Dragons Stairs entrance, there are only two entries, so you must make a new angle. 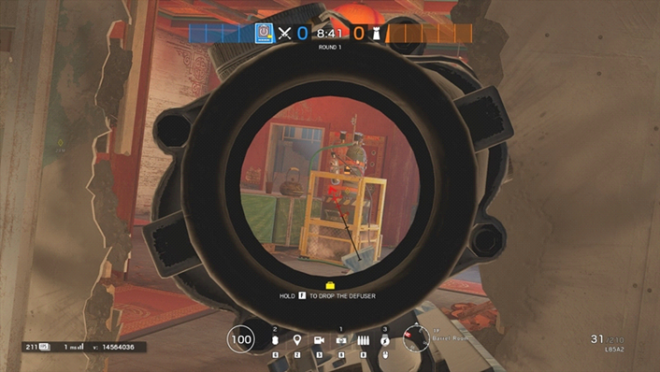 ▲ Breach the Throne Room reinforcement wall at the 1F Barrel Room or... 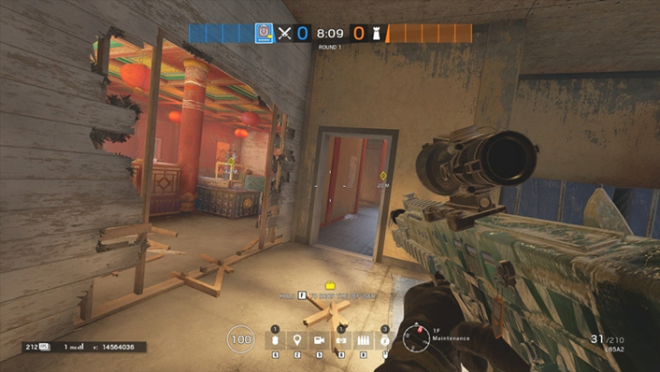 ▲ Breach through the reinforced wall leading to the Throne Room at the Maintenance and create a new angle. 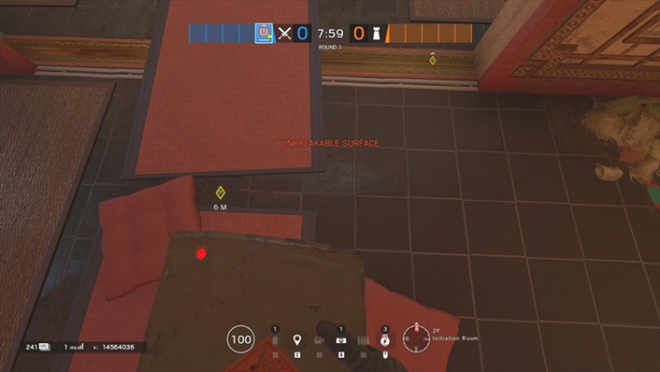 ▲ The 2F Initiation Room, just above the Throne Room, has an unbreakable floor and vertical plays cannot be done. ▲ The floors of the Office and Waiting Room on the 2F are breakable, so vertical plays can be done, but only on the Armory side.     ▣ In case, the site is '1F Lab ~ 1F Storage'   Contrary to the Armory ~ Throne Room described above, Lab ~ Storage has a small Bombsite area and even a window connected to the outside, so the defensive team is quite at a disadvantage. In addition, if the offensive team do vertical play at the Cafe or Upper Arcade on the 2F, there is no room for the defensive team to hide inside Bombsite. Due to this reason, the defensive team often play defense by minimizing the number of players inside Bombsite and employing many Roamers. Therefore, the offensive team must be aware of Roamer's surprise attack.   First of all, it would be good to start the attack by climbing up to the 2F through the west Terrace and entering the Cafe. Here, you can either do vertical play through the floor or go down the stairs to the 1F and enter Bombsite. You don't have to insist on creating a new angle here, as the only wall the hard-breacher has to breach is the Joint Corridor wall. Let's also use the EMP Grenade where the main defense gadgets are located. 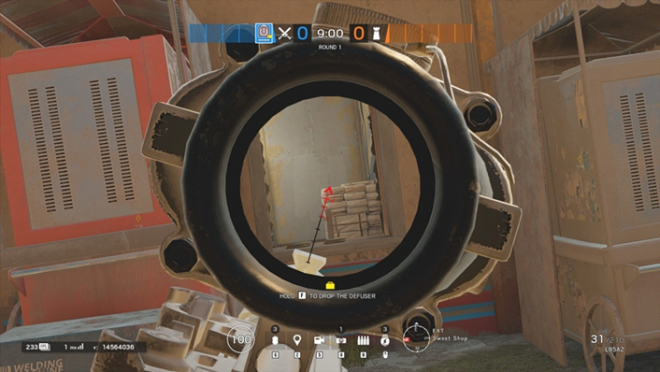 ▲ The Storage side window is connected to the outside, so it would be nice if one person could hold this angle continuously. 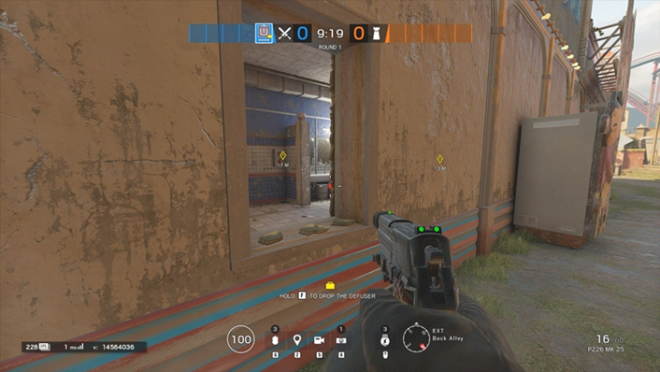 ▲ In addition, there is also an external window at the Arcade Toilet which leads directly to Storage, making it easier to penetrate. 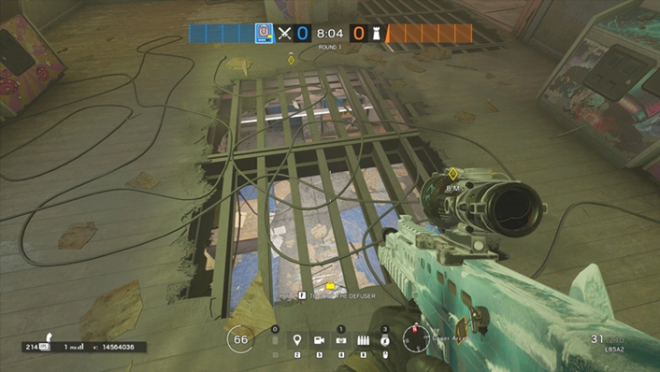 ▲ You can create an angle to attack the defensive team hiding inside Bombsite if you blow up the 2F Arcade Upper or Café floor. 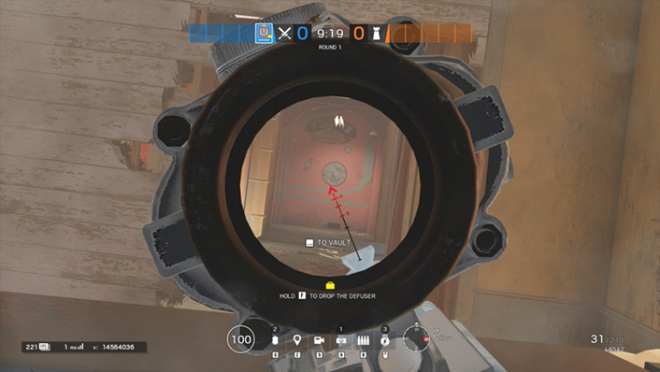 ▲ If you have spawned from the Bumper Cars and entered, you can break through this wall to secure an angle to look at the Yellow Corridor in a long distance. ▲ It is also a good idea to make an angle through the Lab wall at Barrel Room on the 1F.   *Thanks for all your ups and comments!