Guide to playing ‘Frost’ in ‘Consulate’

Consulate is a building-type battlefield consisting of basement, 1F, and 2F. Each floor of the building itself is not that large, but there are three floors in total, and stairs on each floor are arranged here and there, making it a good place for the defensive team Roamer to play. The Objective Location will be one the underground, one on the 1F and one on the 2F, and another two-story Objective Location will be placed on the basement and one on the first floor. However, this two-story Bombsite is not often chosen because it’s hard to defense for the defensive team.   Consulate also has many windows connected to the outer walls around the building. Using this structure, the defensive team often tries spawn kill, but on the other hand, the offensive team can use it as a way of doing rappel plays on the outside wall of the building and attacking the inside through the window. For this reason, when the defensive team has to defend inside the building, it will be important to have a good position not to be checked from the window. 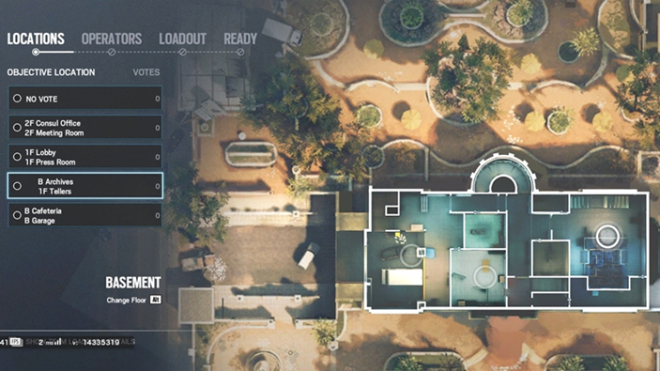 ▲ Consortium's Objective Location has a two-story Bombsite, where it’s hard to defense because it has to be defended on all floors.     Since Year 1, Frost has been one of the two main trap operators for the defensive team with Kapkan. The Welcome Mat, Frost’s dedicated equipment, can only be installed on the floor, so it is usually installed under the corner around Bombsite or under the window frame to prevent the offensive team from entering. For example, if a Welcome Mat is installed under a window frame or a Deployable Shield, the offensive team must shoot under its feet when jumping over it, which makes it difficult to enter easily because it becomes vulnerable to attacks by the defensive team.   Frost can select 9mm C1 Submachine Gun and Super 90 Shotgun as a Primary Weapon. In the case of Super 90, it was notorious for its mid-range coverable shotgun at the time of launching, but now it get nerfed and has a slightly longer range than other shotguns. This is why users usually choose 9mm C1 that is possible to engage in mid-range combat and an auto weapon, but 9mm C1 is a gun that requires some adjustment, with a high Damage of 45 and extremely low Fire Rate of 575. 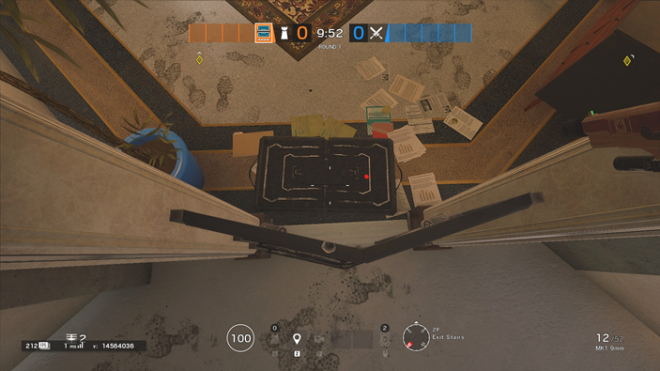 ▲ If you jump over a window frame or a Deployable Shield, you must shoot the Welcome Mat installed underneath while jumping over it. ▲ Frost’s 9mm C1 is uniquely only able to equip Angled Grip for the Grip Attachment.     ▣ In case, the site is '2F Consul Office ~ 2F Meeting Room'   The 2F is the top floor of the building, where there is no risk of vertical plays by the offensive team, but likely to try rappel plays through windows all over the Bombsite. For this reason, it is most important to hide your body in a position that is not checked in any side.   The only way for the offensive team to approach Bombsite is to take the stairs from the 1F to the 2F or enter the 2F window. That's why the defensive team has to use the map wide enough to detect the offensive team's entry into the window, keeping an eye on the three stairs that can come up to the 2F.   There aren't so many places for Frost to put the Welcome Mat. Occasionally, the offensive team may try to climb up the Balcony on the 2F and enter the Meeting Room, and to catch it, you can put a Welcome Mat under the window frame on the Balcony side. Or it would be fine to install a Deployable Shield fitting the Exit Stairs or Service Stairs doorframe and put the Welcome Mat on the back. 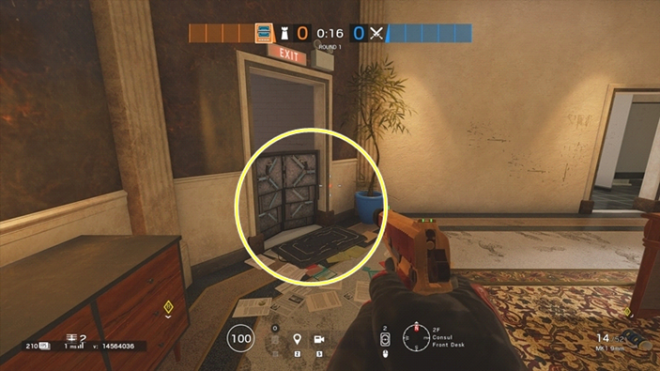 ▲ Install a Deployable Shield on the door and place the Welcome Mat under it to make the same effect as installed on the window frame. 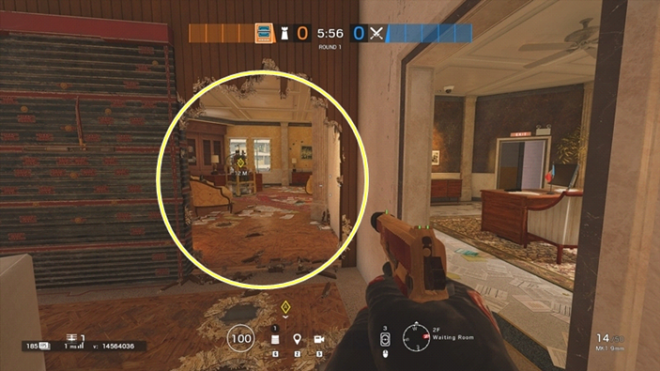 ▲ Usually, the defensive team defend here after they make a Rotation in the Waiting Room between both Bombsites. 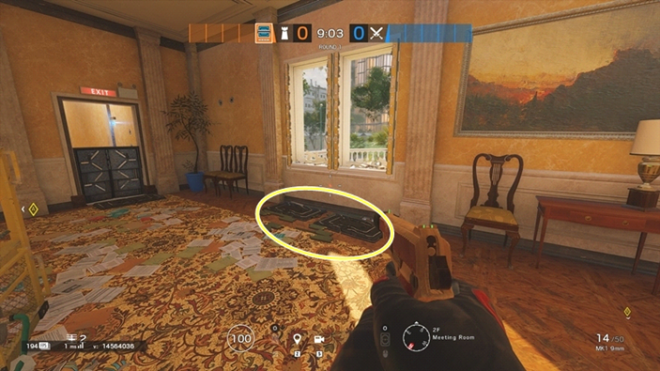 ▲ In some cases, they may try to enter the Meeting Room from Balcony on the 2F, so you can install it under the window frame here. 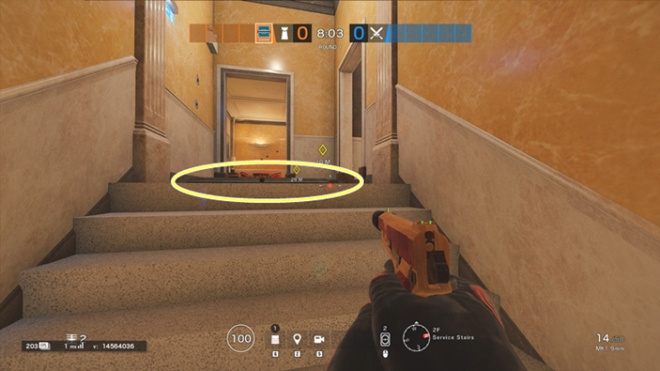 ▲ If you install it on the stairs, you can't see it well, and the offensive team often comes with aiming, so they are often caught.     ▣ In case, the site is '1F Lobby ~ 1F Press Room'   When the offensive team breaks the barricade at the entrance on the 1F, the Lobby Bombsite comes at a glance from the outside. This makes it difficult for the defensive team to defend at the Lobby, so it would be better to hide in the Public Bathroom right next to it, or to defend by breaking the Meeting Room floor on the 2F and looking down the 1F. In addition, there are attacks from the windows of the Press Room or from the Exit Stairs, defenders also need to defend these places.   Similarly, Frost has only few places to install the Welcome Mat. You can install it under the exterior window frame of the West Corridor and catch an offensive team trying to enter through this window. As the Objective Location is on the 1F, sometimes the offensive team may try to attack through the hatch or try vertical play on the 2F. It would not be a bad idea to put a Welcome Mat on the 2F for this. 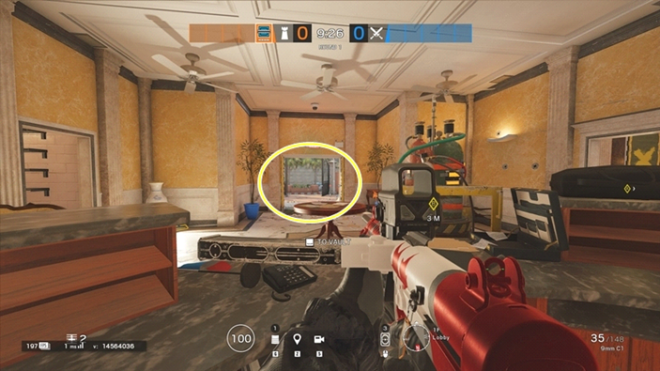 ▲ Lobby is exposed to the point where it is difficult to defend from the inside once the entrance barricade is broken. 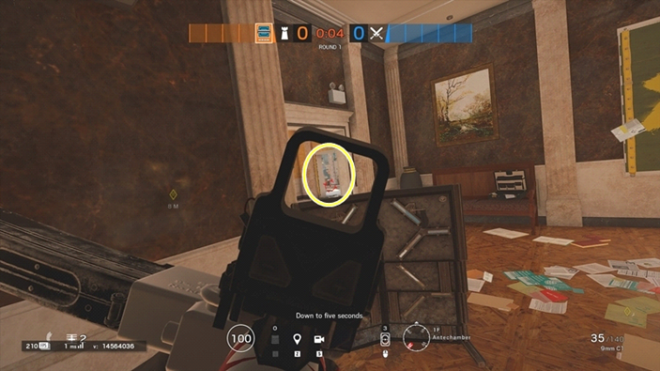 ▲ Because of this, you should hide your body near the Public Bathroom and check... 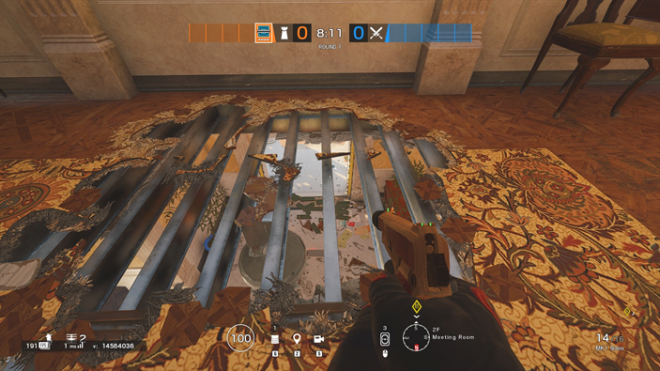 ▲ In the Meeting Room on the 2F, you can make a hole on the floor and wait for the offensive team to enter. 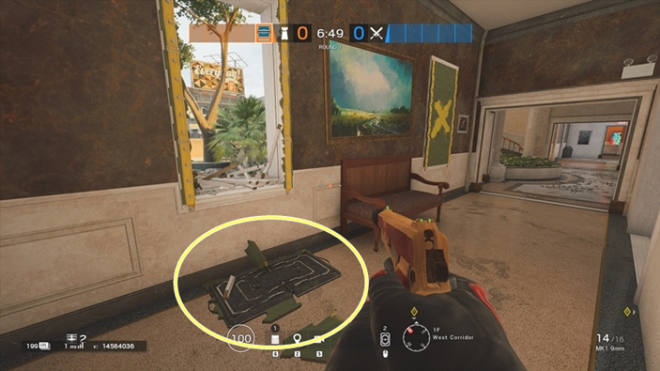 ▲ The Welcome Mat location to catch the offensive team entering through the West Corridor window on the 1F on the opposite side. 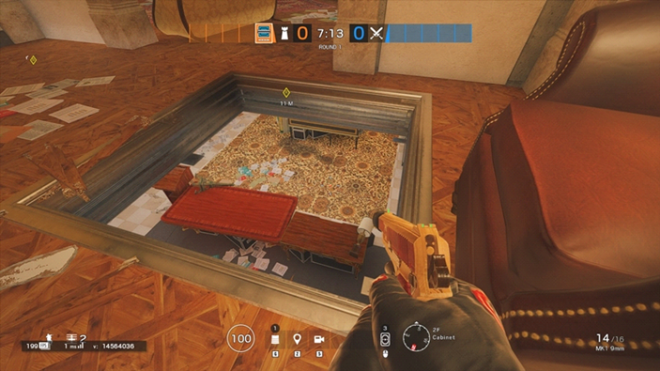 ▲ In many cases, the offensive team infiltrates the 2F and attack through the hatch, so members are needed to defend the 2F. ▲ It would not be a bad idea to put a Welcome Mat at the point where the offensive team is expected to enter on the 2F.     ▣ In case, the site is 'B Archives ~ 1F Tellers'   As explained above, the Bombiste is placed on the basement and the 1F, so the defensive team must defend both the basement and the 1F. Even the 1F Tellers is very difficult for the defensive team to block the attack if the offensive team penetrates into the Administration Office on the 2F and attacks through the hatch. For this reason, the 2F will also need members to respond to this. As you can see, the defensive has to defend on almost every floor, so this Objective Location is where the defensive team dislikes the most.   It's not a good place for Frost, who has to put a Welcome Mat around Bombsite and aim for the moment of entry for the offensive team. It's hard to focus on one place because the places to install the Welcome Mat are the window frame of Visa Office on the 1F, the underground Archives entrance, and the stairways on each floor. So, let's set them at the attack area evenly and remind the team members of the Welcome Mat's location. 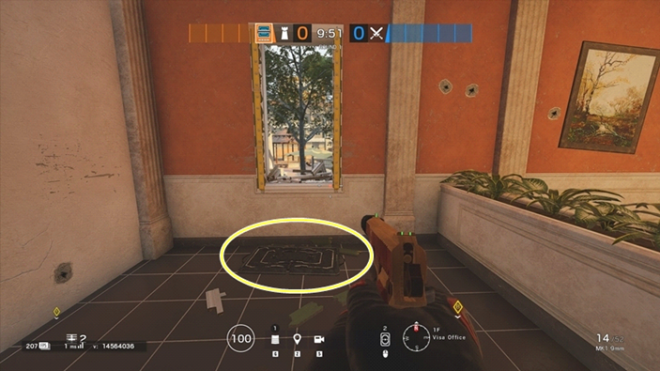 ▲ Offensive team will try to approach the Visa Office first to attack the Tellers on the 1F. 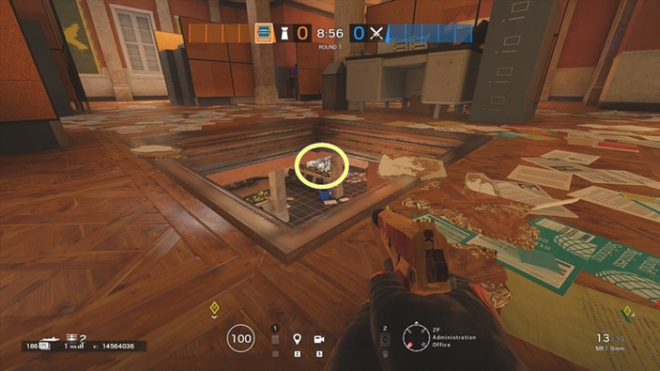 ▲ The offensive team can destroy the Welcome Mat by rappelling, so it is not really recommended to put here. ▲ Deployable Shield Setup you can use at the underground Archives 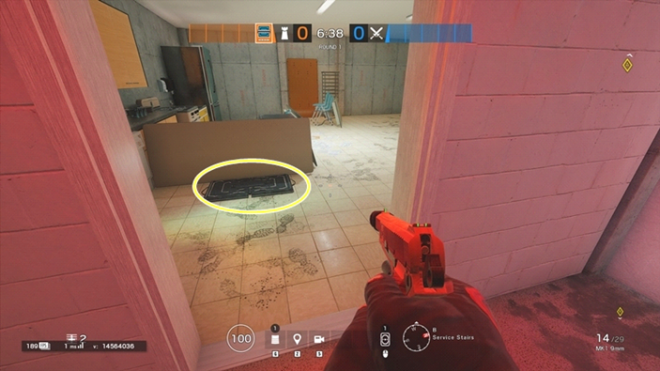 ▲ At first glance, it seems it would be exposed meaninglessly, but... 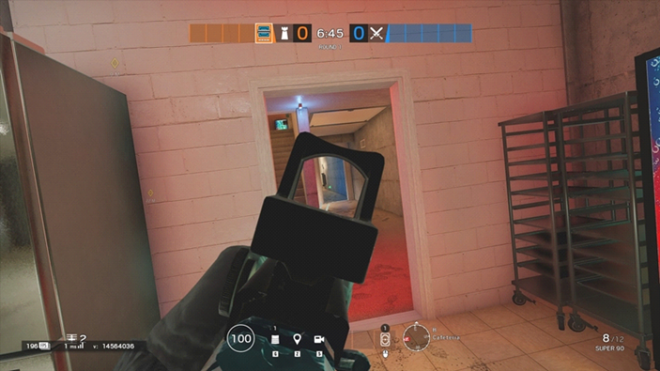 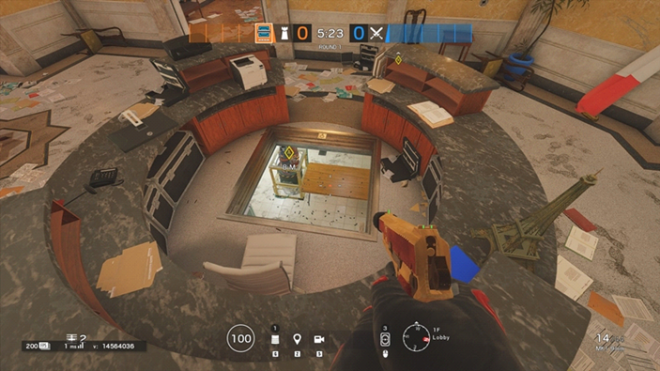 ▲ Each Bombsite has a hatch right above it, so it must be reinforced during the Preservation Phase. ▲ Especially, the public Bathroom hatch leading to the Garage Bombsite is important. 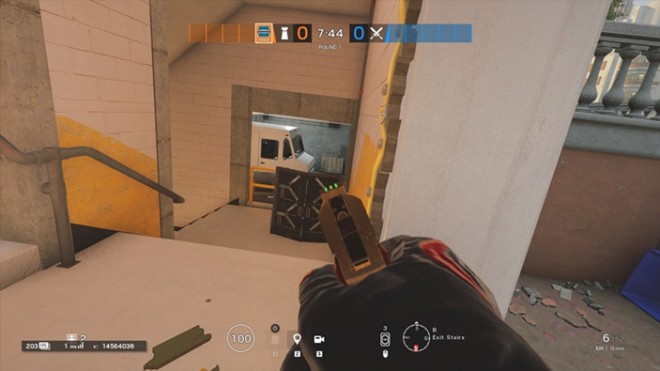 ▲ Put the Deployable Shield down like this and cover the back of the reinforced wall... 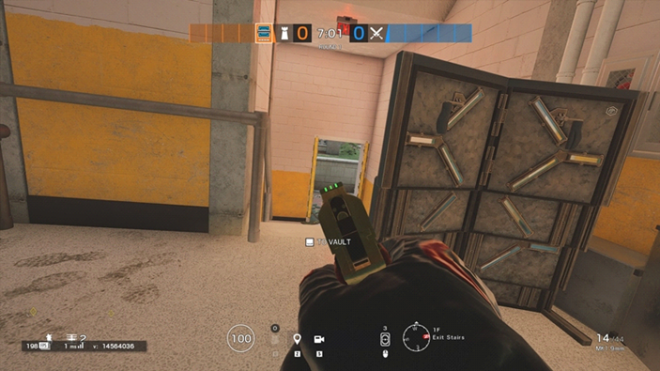 ▲ Or It can be set on the top of the Exit Stairs and used to keep the approaching offensive team in check. ▲ The Welcome Mat location in case the Exit Stairs are breached. 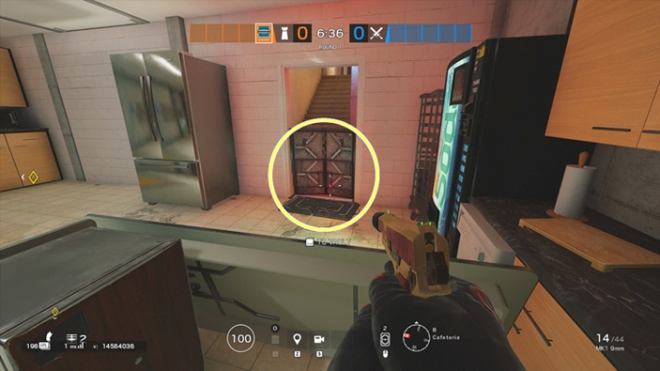 ▲ The Deployable Shield Setup to block access to the Cafeteria.