Guide to playing ‘Thermite’ at ‘Oregon’

Oregon is a medium-sized battlefield with a basement, first and second floors. This map is where some of the Objective Locations were out of balance, had been reworked and adjusted through the last Operation Voice Edge season. The Objective Location is located in a total of four areas, one on the 2F, two on the 1F, and one on the underground. Unusually, the 1F Objective Location has both the form of Bombsite generated in the Kitchen. However, the defense team does not prefer the 1F because there is a risk of being attacked by vertical plays on the 2F, so the basement or the 2F is often chosen.   Instead of the disappearance of the Big Tower's double-layer Objective Location, which was so hard to stop for the defense team, there was a change in the addition of new offensive routes for the offensive team to choose from. This has led to more engagements in various places. 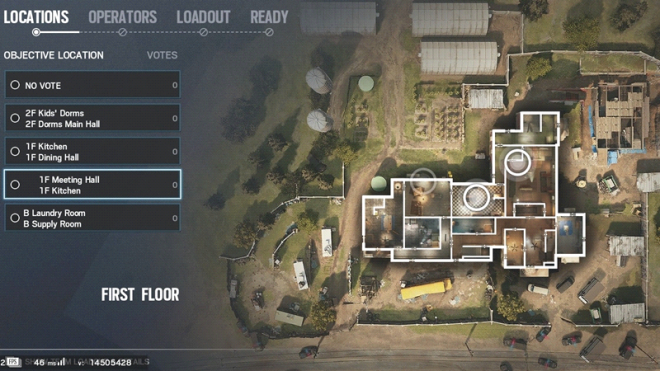 ▲ Reworked Oregon’s Objective Location, two Objective Location both includes the Kitchen.     Thermite is an operator in the role of a hard breacher that can breach reinforced walls with its dedicated equipment, Exothermic Charge. The offensive team currently has four hard breacher roles, including Thermite, Hibana, Maverick, and Ace, who joined in Operation Steel Wave season, of which Thermite is the representative operator of a hard breacher that has been selected since the beginning of the game’s launch.   When working on breaching, Thermite directly approaches the target reinforcement wall, attaches an Exothermic Charge, and makes it explode. Naturally, during this process, it is necessary for the team members to cover as much as possible because Thermite becomes defenseless while attaching, but if they succeed in the explosion, he can make the biggest hole than any other hard breachers of the offensive team. In addition, it is possible to put on an Exothermic Charge and retrieve it immediately, enabling the team to cope with the Bandit trick to some extent.   Thermite can select 556XI Assault Rifle and M1014 Shotgun as a primary weapon. Both guns have good performances, and Oregon has many short-range engagements, so it is worth adopting the M1014 shotgun. However, considering that Thermite's top goal is to move around Bombsite and breach the reinforced wall, shotguns are a bit risky. If you must move to the intended location safely, I recommend choosing 556XI. 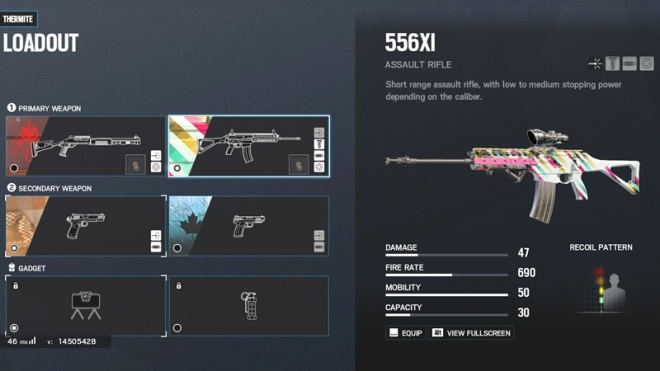 ▲ Thermite only has two choices for his primary weapon, so players mostly select the safe auto-rifle, 556XI. 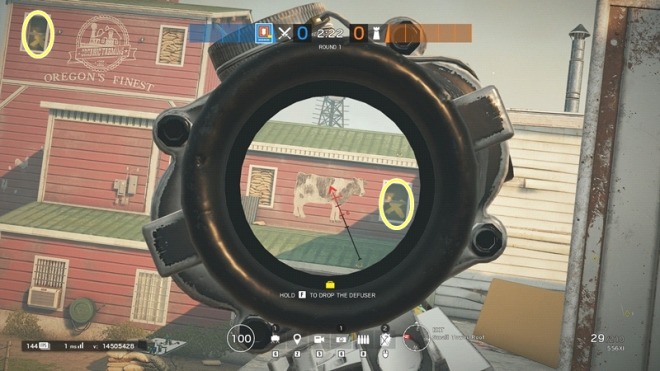 ▲ If you select 556XI, you can respond to spawn kills and long-range engagements with the ACOG sight attached.     ▣ In case the site is located at '2F Kids' Dorms ~ 2F Dorms Main Hall'   When the Objective Location is generated on the 2F, the offensive team usually goes up the Dining Hall Roof on the 2F and then breaks the Dorm Main Hall window to check the inside or break into the Attic or the Master Bedroom. At this time, the Attic and the Master Bedroom Walk have reinforced walls that are good if hard breachers breach, so Thermite should try to breach there.   When breaking into the Attic, I recommended you to spawn at the Construction Site and then enter the Big Tower. Of course, it is basic to carefully check whether there isn’t a roamer hiding at the Big Tower using the drone before entering. After that, let's breach through the reinforced wall at the Attic and check the Bombsite. However, in this case, the roamer can climb the Big Tower stairs and aim for the back, so must always be careful.   If you plan to penetrate into the Master Bedroom, it will be convenient to spawn at the Street side. Since this place is also very close to the Bombsite, drone reconnaissance is essential as the defensive team can easily detect the sound of breaking windows. It would be nice if the other team members guard against the Master Bedroom while Thermite goes into the Walk In and works on the breaching process. 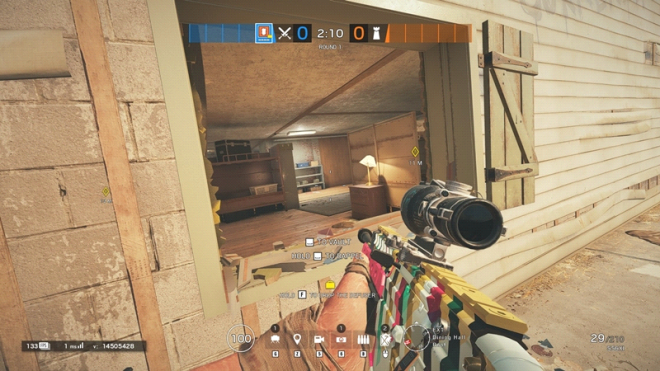 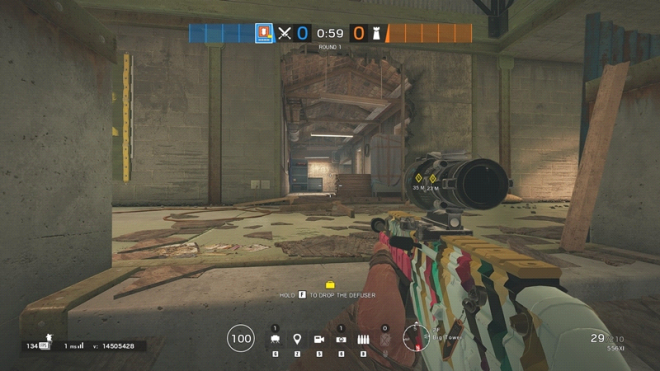 ▲ Thermite mostly breaks and enters the wall of the Attic at the Big Tower. 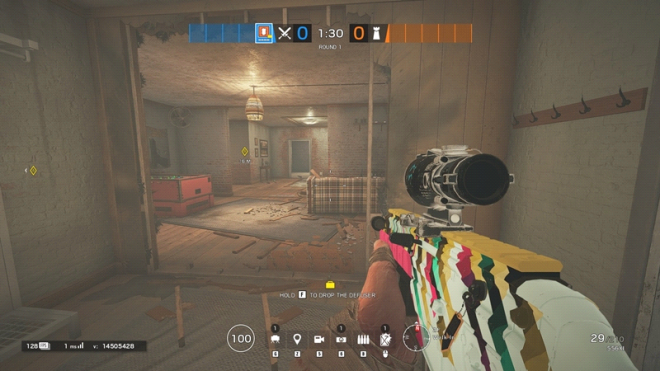 ▲ Or put pressures after breaching the reinforced wall and making a new angle at the Master Bedroom Walk In. 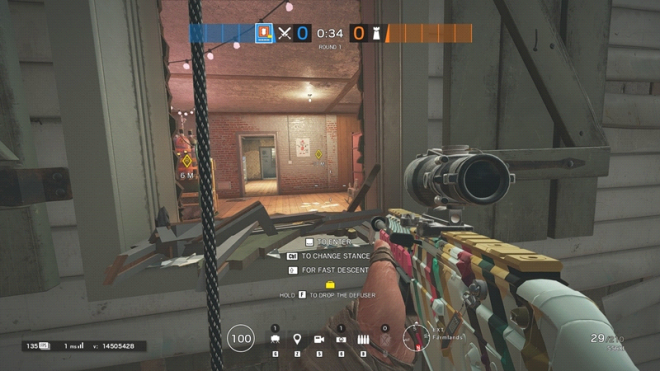 ▲ Checking the inside while doing rappel from the window of the Kids’ Dorm.     ▣ In case the site is '1F Kitchen ~ 1F Dining Hall'   Since Bombsite has generated on the 1F, the offensive team gains more options to do vertical plays or hatch drops on the 2F. It doesn’t matter attacking the Dining Hall at the Small Tower or the Kitchen at the Meeting Hall, or break the hatch at Kids' Dorms on the second floor, Thermite can do its job on any side.   To attack Dining Hall, it is necessary to occupy the Small Tower first. However, sometimes the defense team roamer may be lurking in the office on the 2F of the Small Tower, but if Thermite dies after entering without clearing the roamer first, there could be a major setback in the offensive team's attack. Be sure to clear the 2F of the Small Tower with your team members and try the breaching process.   If you have entered the Meeting Hall, you'll be able to make a new angle by piercing the wall connected to the Kitchen. If you and your team put pressure here, in the Kitchen Corridor and the Security Corridor from various angles, the defense team will lose the place to hide at the Kitchen. 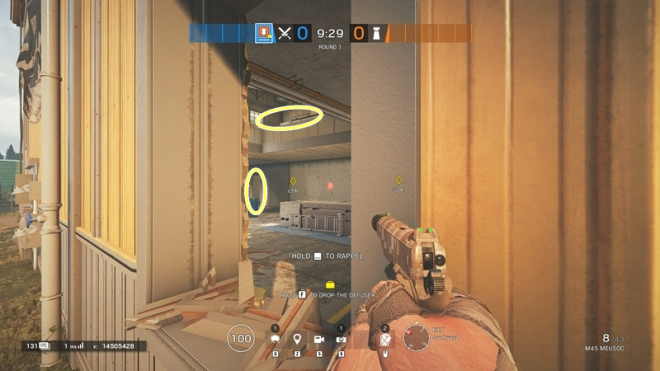 ▲ The window we can use to check the inside of the Small Tower, but the offensive team can come to check at the Office or the Dining room entrance in reverse on the 2F. 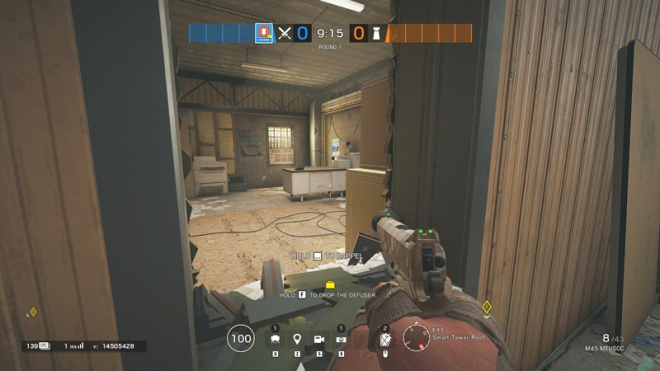 ▲ If a roamer is hiding, it will be easy to enter the Dining Room after clearing the 2F first with team members. 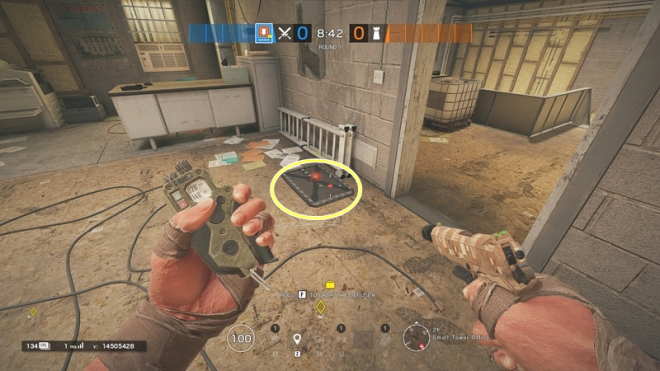 ▲ If you attach an Exothermic Charge here and fire it up... 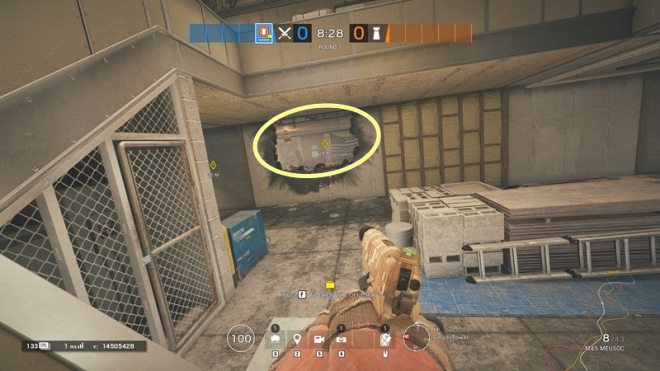 ▲ You will be able to make an angle like this that can check the inside of the Dining Room. However, be careful as the defensive team can stop this by the Impact Grenade or shooting. 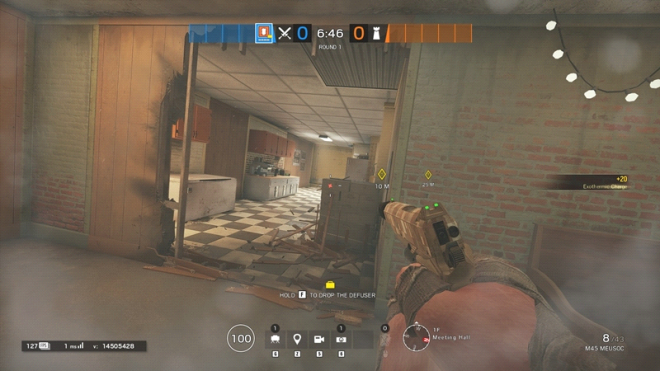 ▲ Otherwise, breach a wall of the Kitchen at the Meeting Hall on 1F... 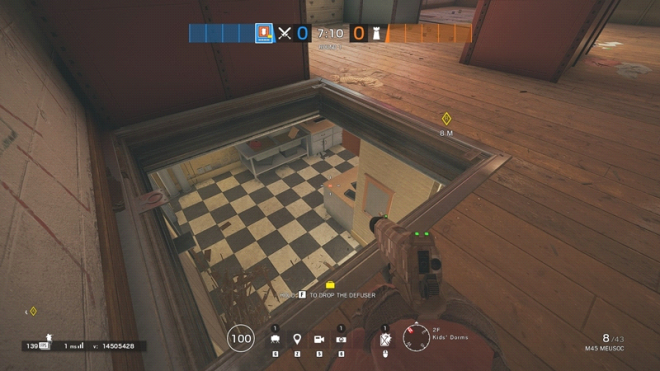 ▲ Or break the hatch at the Kids’ Room on 2F and can aim for the hatch drop.     ▣ In case the site is '1F Meeting Hall ~ 1F Kitchen'   Instead of using Kitchen as the Bombsite as above, the other Bombsite is placed on the opposite side of the Meeting Hall. For the defensive team, the Meeting Hall side should be reinforced, which will cause the Dining Room side to become vulnerable to defense the Kitchen area. For this reason, it does not appear often, as it’s an Objective Location that the defense team does not prefer. For the offensive team, they would gain a huge advantage if they aim at the weak spot.   If an attack is carried out in the Kitchen direction through the Small Tower, proceed similarly to the one described above. Clear the Small Tower, break through the Dining Room, and approach the Kitchen. Otherwise, it will be better to aim for the hatch that leads from the Kids' Dorms on the 2F to the Kitchen.   If you are going to attack through the Meeting Hall, I recommend you to enter the Big Tower and then break the wall leading to Meeting Hall, or pierce the hatch of the Attic after breaking the wall leading to the Attic on the 2F. In particular, the hatches on the 2F can overlook the Bombsite, keeping the defensive team from hiding in the Meeting Hall. 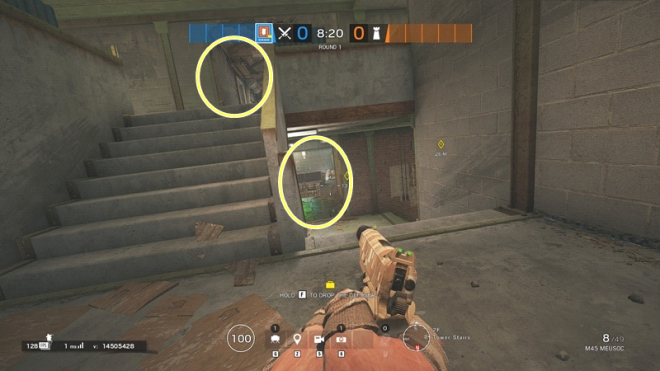 ▲ Let’s check the enemies by breaching the wall from the Big Tower and making a new angle. 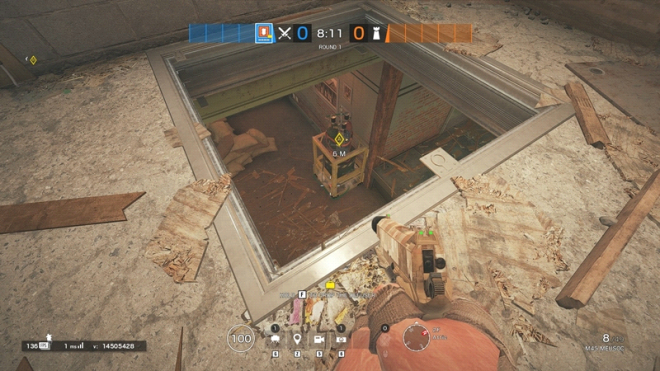 ▲ If you pierce the hatch at the 2F Attic, you can get an angle that can check almost all sides of the Meeting Hall. 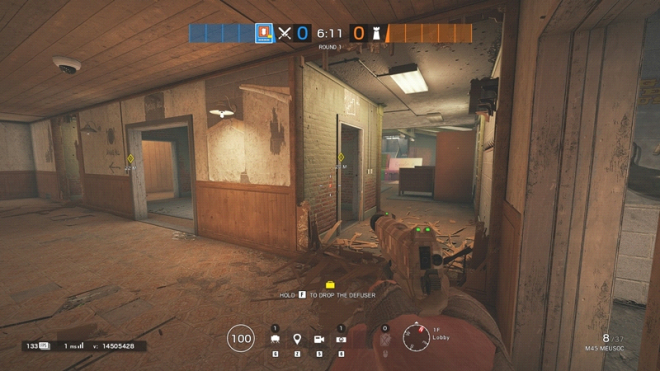 ▲ You can take control of the Meeting Room after removing the defensive team at the Lobby side hiding at the 1F Split. 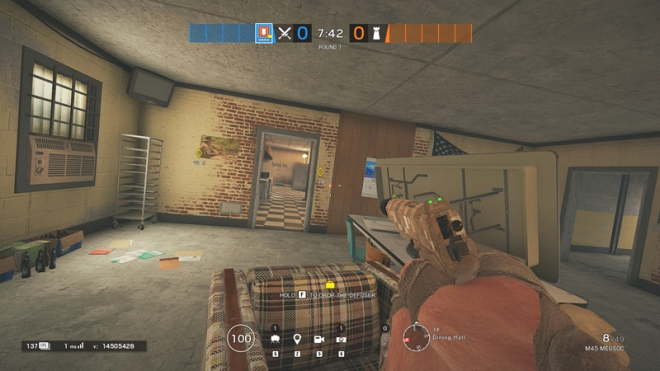 ▲ It would be a good choice aiming at the Dining Hall side if the Meeting Hall is crowded.     ▣ In case the site is 'B Laundry Room ~ B Supply Room'   The basement has no windows or doors from Bombsite to the outside, and the attack route has been set to some extent, making it the most favored position by the defensive team before the rework. However, as the way to the Freezer from the 1F to the basement has been added after the rework, the offensive team also has a chance to win.   If spawned at the Construction Site, I recommend you to enter the Bunker side and breach the Blue Bunker side reinforcement wall. If successful, you'll get the chance to put pressure on the Bombsite just around the corner. Because the offense team often tries fast breaching at this place after the rework, so the defense team also installs many gadgets here, so be careful.   It would be good to attack the newly added route to the Freezer. Spawn at the Junkyard, then brake into the Small Tower and go down the stairs in front of the Security. Likewise, if you succeed breaching here, you will be able to get an angle that can watch every side of the Laundry Room. 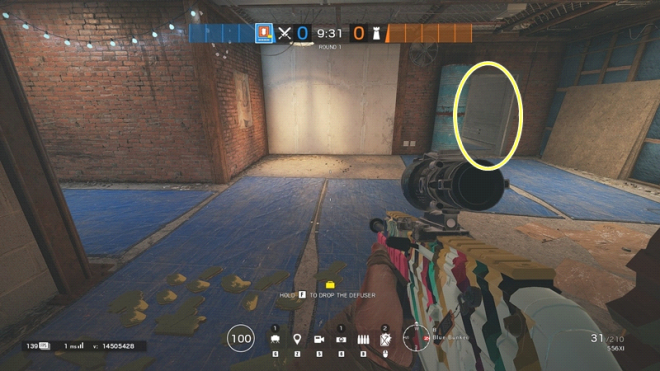 ▲ There are many walls that Thermite can breach if you enter through the Bunker. Be aware of the defensive team hiding at the right side of the passageway, 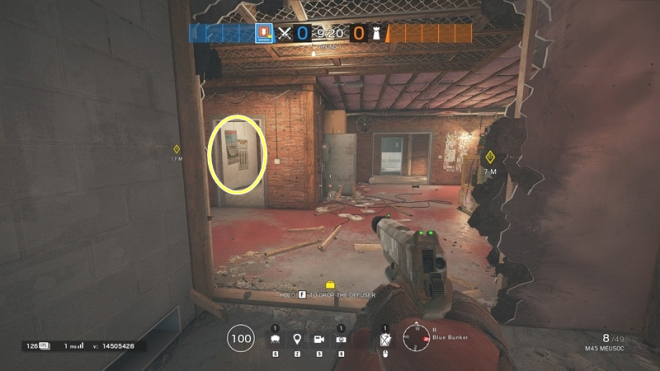 ▲ B Bombsite is right at the front if you breach the inner wall of the Blue Bunker, it’s the best place to breach as the Black Mirror is often installed by Mira. 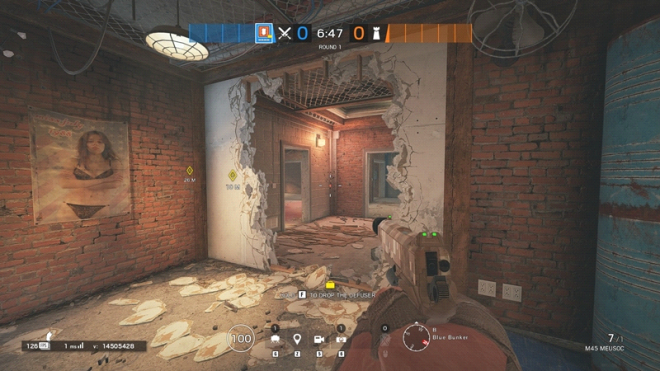 ▲ You can also get some useful angles when breaching this wall at the Blue Bunker. 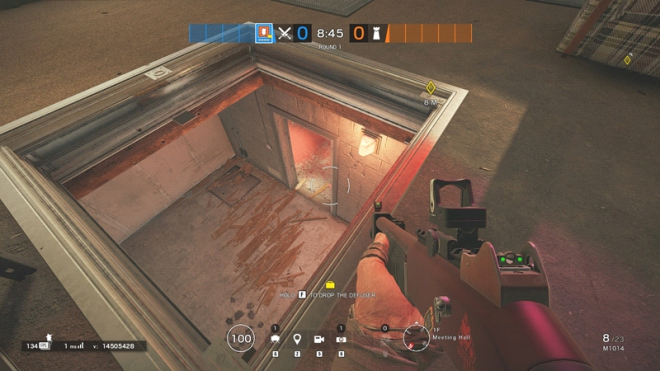 ▲ However, be careful when the hatch on the upper side is open. 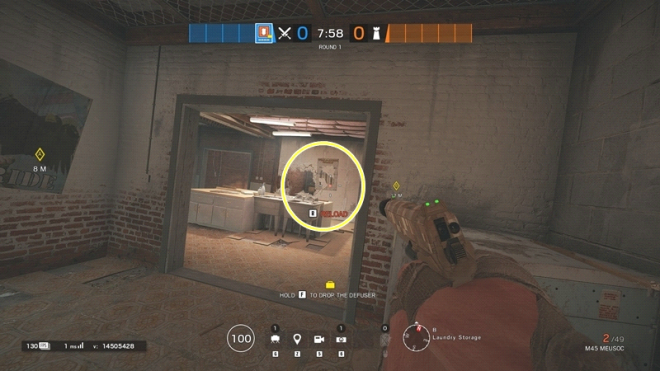 ▲ It is good to take the Laundry Stairs, but there’s often a Black Mirror installed by Mira at the circled point. 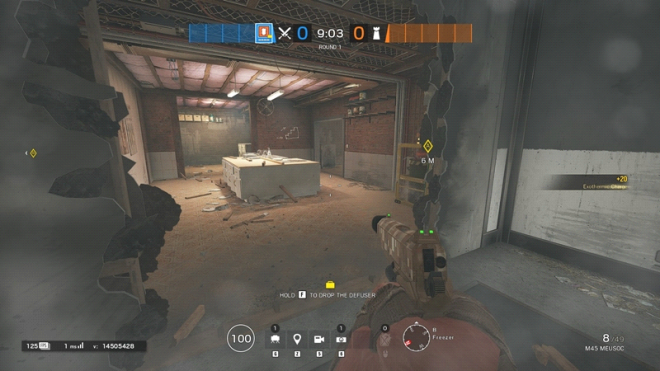 ▲ If you enter through the Freezer side and breach the wall, you can get the angle that can see the whole A Bombsite.   * Every single ups and comment gives me energy to make more of these.