Theme Park is a medium-sized battlefield consisting of only the first and second floors. This is where there have been some changes in the structure of the building due to the rework in the Operation Shift Tides season, which has resulted in the adjustment of attack and defense balance. The Objective Location will have two locations on the second floor and two on the first floor. Among them, the Initialization Room, which is located to the east of the building, or the Third Room, or Armory, is quite favorable to the defensive team.   There are many windows connected to the outside in all directions of the building, so there is plenty of room for the defensive team to try spawn kill or run-out play. On the other hand, both teams need to pay attention to the windows as the offensive team can also use to check the inside by hanging from the window doing rappel play. 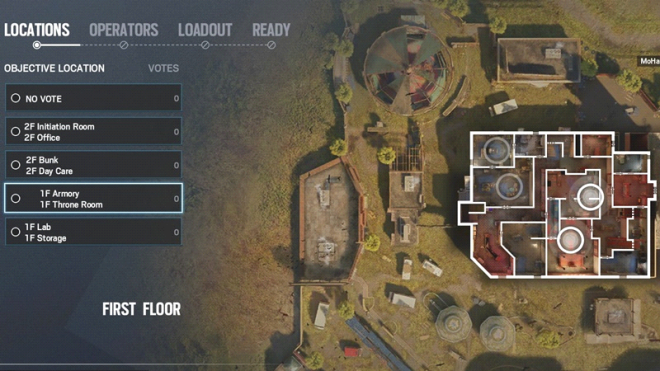 ▲ 'Armory ~ Throne Room' Bombsite is quite advantageous to the defensive team, so this place is selected quite often even though it’s on the 1F.     The Mute's dedicated equipment, the Signal Disruptor, has the effect of neutralizing the offensive team's electronic equipment in range. In addition, within the range of the Signal Disruptor, the Logic Bomb by Dokkaebi or the EE-ONE-D drone by Lion may not be affected when operated. In particular, it is used to block the offensive team's drone reconnaissance by installing around the gate of bombsite because it can affect the offensive team's drone in a flexible way within the defensive team with Mozie's Pest.   Because of this, Mute is also notorious for being a very busy operator during the Preferment Phase. As soon as the game begins, the time runs out just by installing four Signal Disruptors at the entrance around Bombsite and strengthening two walls that need reinforcement, but additional time is needed, such as relocating the Signal Disruptor or installing the Bulletproof Camera, if necessary. Maybe this is the reason why Mute is vulnerable to the offensive team's rush strategy, so he must be as busy as possible during the Preferment Phase.   Mute can use SMG-11 Machine Pistol as a secondary Weapon, so it is worth considering using M590A1 Shotgun as a primary Weapon. Of course, SMG-11's recoil is quite strong, so it is difficult to use it over medium-range, so it is better to choose MP5K when attempting a spawn kill or a long-distance engagement. If you choose M590A1, you can do a Remodel job around Bombsite. (Creating a shooting angle by making holes with a shotgun or creating a rotation that allows the defensive team to pass by)

▲ It is a basic play for Mute to install a Signal Disruptor on the way the drones often go by and block the internal information. 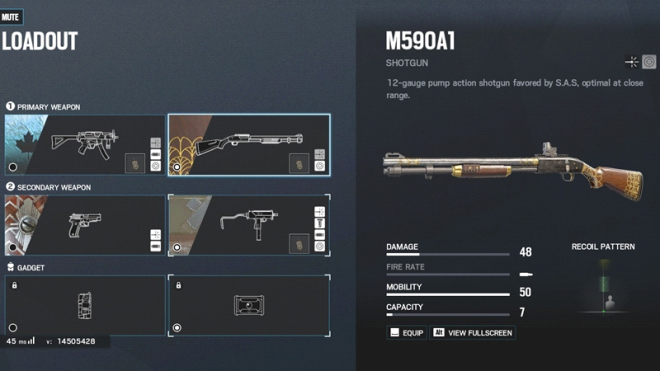 ▲ M590A1 is good for Remodeling but also has a long shooting range, so it is a useful 1tier Shotgun for combat purposes.     ▣ In case, the site is located at ‘2F Initiation Room ~ 2F Office’   Since the Bombsite location is located in the center of the second floor, the offensive team will usually launch an attack as if surrounding the Bombsite through the west's Cafe Terrace, the Castle Entrance on the east side of the second floor or the hatch of the roof. Therefore, the defensive team will also have to move in a fluid manner, sensing the offensive team's attempt to enter the building while spreading wide enough to use the entire second floor.   As soon as the game starts, install a Signal Disruptor around the Bombsite to block the drone's reconnaissance as much as possible. You won't be able to hide the location of the Objective Location but can obscure the internal situation of the Bombsite. If you're lucky, you can also hide the information about the Bombsite operator, so you can get a little advantage.   Occasionally, the offensive team will use hard breachers and try to breach the reinforced walls around the Bombsite, and it would be a good idea to install a Signal Disruptor behind this wall to keep the hard breacher’s equipment out of operation. However, it is better to use the Signal Disruptor to block the drone of the offensive team and it is easily removed by Thacker's EMP Grande, so if the team has Bandit or Kaid, it is better to yield the wall to them. 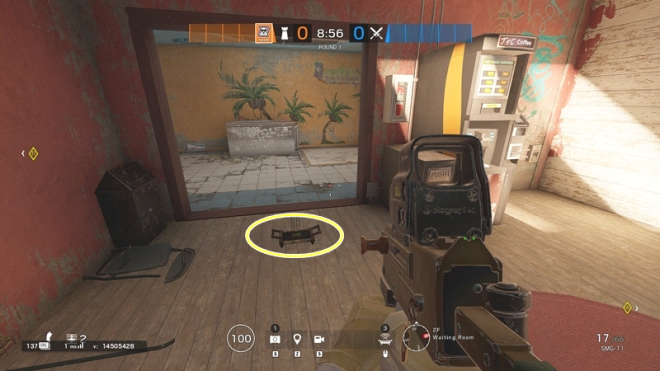 ▲ A good place to install a Signal Disruptor during the Preparation Phase, let’s switch the position during the Action Phase. 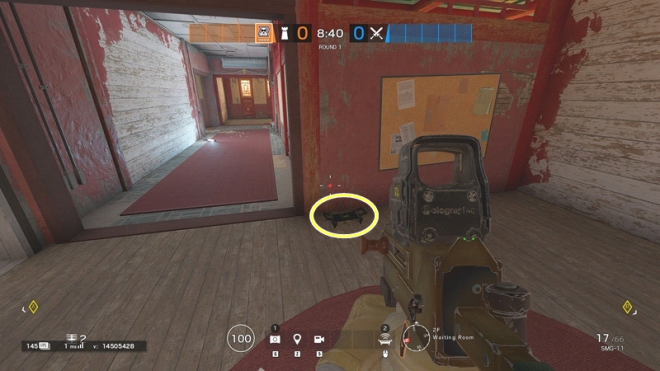 ▲ The place we can block the drones coming from the Cash Corridor. 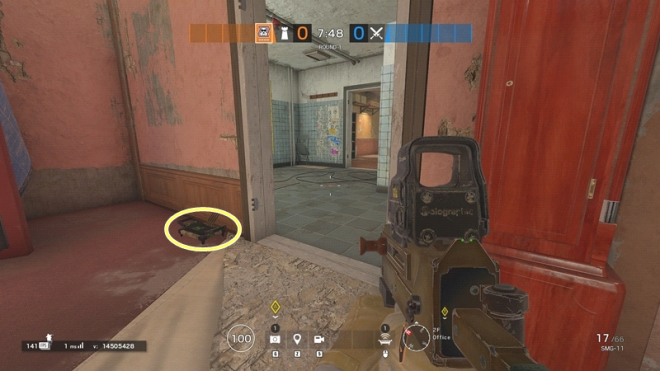 ▲ The place we can block the drones coming from the Cash Stash and the Office Showers. 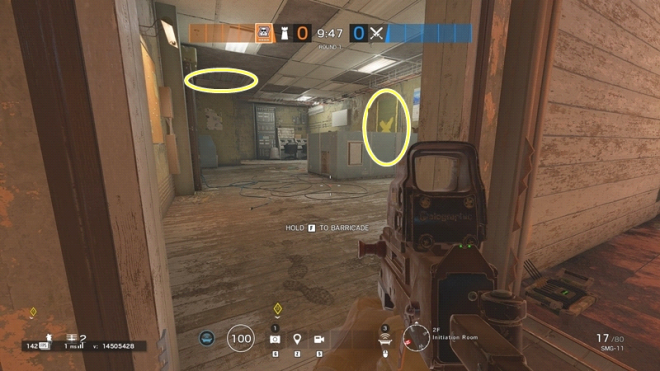 ▲ Someone has to check this way as the offensive team can enter this place by the Control Room’s hatch, door, or window. 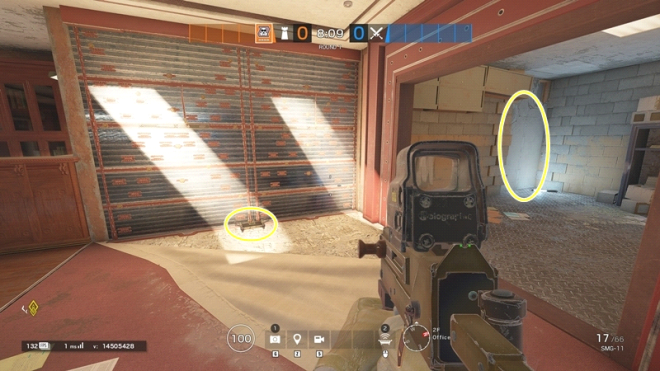 ▲ The wall at the Office is where the offensive team often attempt to breach, so if there are no Bandit or Kaid, it is better to install a Signal Disruptor. 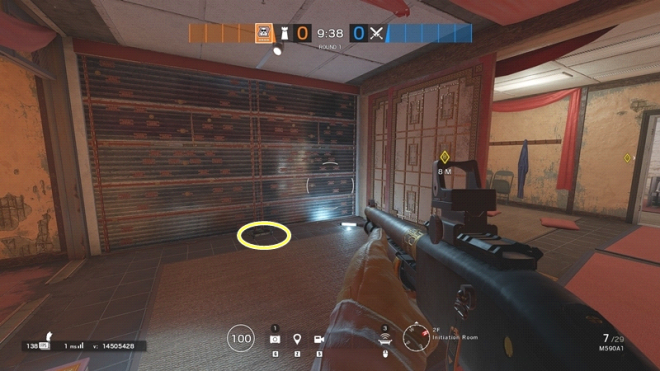 ▲ The Initiation Room as well, they may penetrate into the Bunk and breach the wall.     ▣ In case, the site is ‘2F Bunk ~ 2F Day Care’   If the offensive team comes up to the Terrace on the 2F and enters the Cafe, it is close enough to reach the Bombsite immediately. However, the defensive team can also keep the offensive team in check while waiting for the Yellow Corridor or the Upper Arcade, which usually leads to an engagement with the offensive team around here.   If you have chosen the M590A1 shotgun, there are some places you can do the Remodel job. First of all, never reinforce the wall between the Bunk and the Day Care, but let's make a rotation so that people can pass by if possible. The wall leading from the Break Room behind the Bunk to the Upper Arcade would also be good to have a rotation.   The offensive team will sometimes do rappel from the window on the Break Room side to check the Bunk side. In this case, it will be easy to catch them doing rappel play if you go for a run-out play to the windows at the north side on 1F. To guard against this, the offensive team may have also set up Claymore Mine, but since there are more than one or two windows, it would not be a bad idea to try it once if you are roaming. 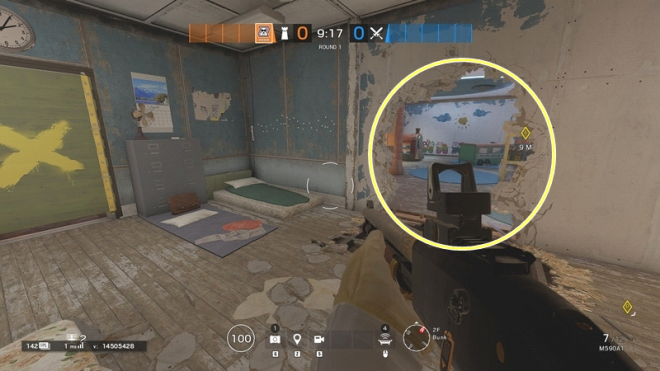 ▲ ‘Don’t block the wall between A bomb and B bomb’, let’s make a route so the team can be able to come and go to both of the Bombsites. 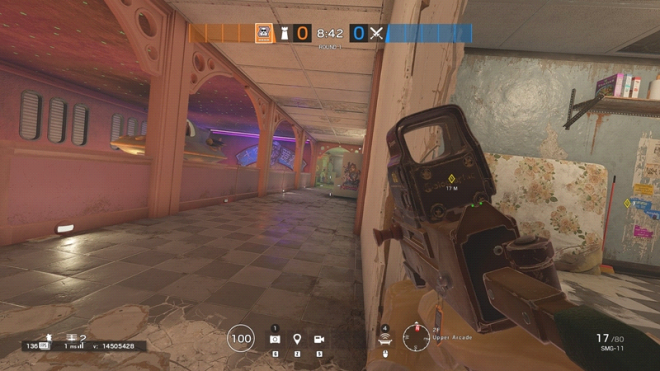 ▲ It will also be better to break the west wall of the Break Room to come and go by. 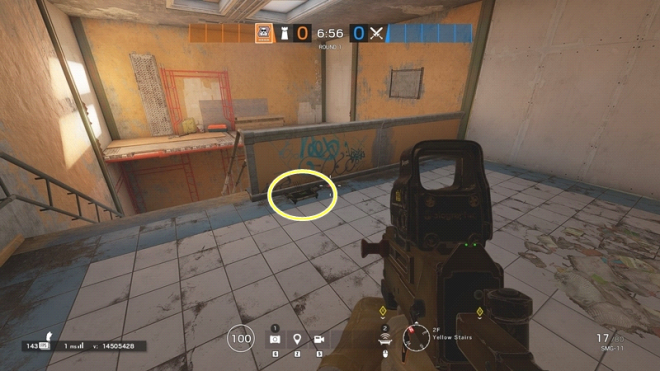 ▲ it is useful to support a Signal Disruptor for the roamer located at the Yellow Stairs. 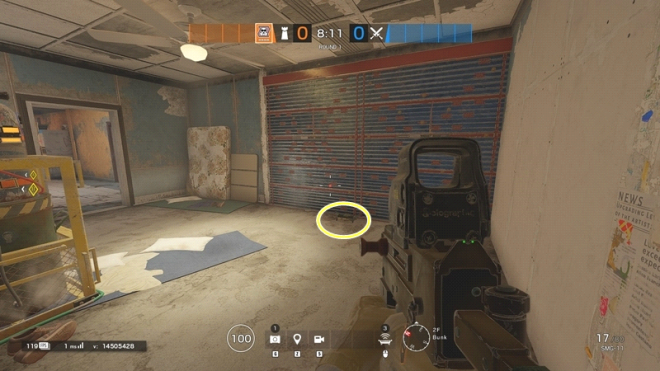 ▲ Always be careful as the offensive team can attempt hard breaching at the Initiation Room towards the Bunk. 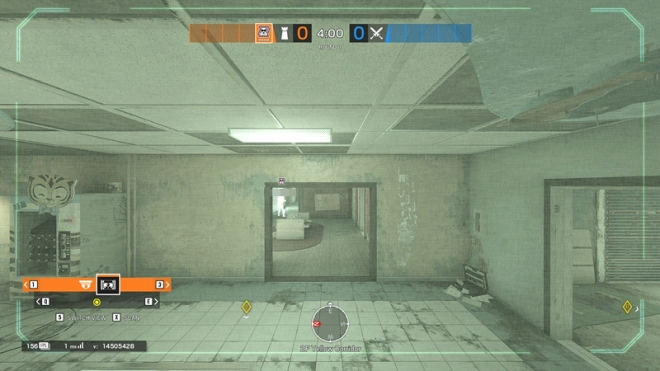 ▲ It will be efficient to install by watching this way if you use the Bulletproof Camera. ▲ If you break down this wall at the Break Room, you can make an angle to check the offensive team coming through the Yellow Corridor. 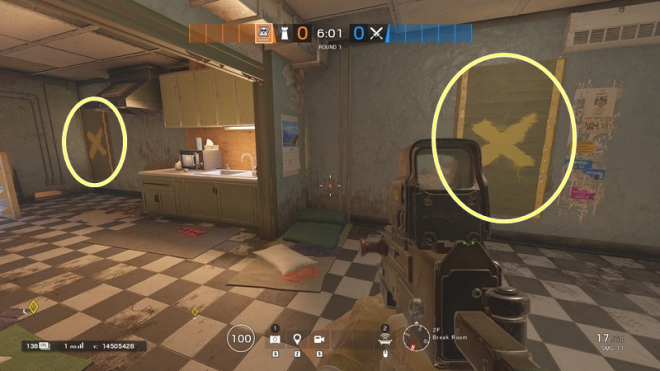 ▲ However, the Break Room is vulnerable to rappel play as two windows are connected to the outside. 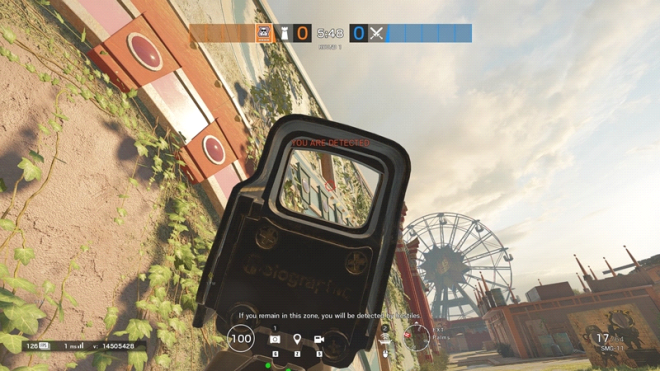 ▲ In this case, it will be easy to catch the offensive team doing rappel play if you do a run-out play to the windows at the north side on 1F.     ▣ In case, the site is ‘1F Armory ~ 1F Throne Room’   There are only two entrances to enter the Bombsite, one on the Throne Room and one on the Blue Room, making it extremely difficult for the offensive team to enter the Bombsite. If the offensive team tries to enter without thinking, it is likely to be blocked immediately by the defensive team that is watching the entrance. Because of this, the offensive team will try to create a new way of using a hard breacher. The defensive team also often uses Bandit or Kaid to reinforce the walls.   As soon as the Preservation Phase starts, drones can be blocked by installing Signal Disruptors near both entrances. However, it is not completely blocked because there is a drone hole connected to the outside on the south side of the Throne Room, so it is necessary to pay attention to drones entering through this area. If there is no Bandit or Kaid in the team, let's set up a Signal Disruptor behind the reinforced wall on the Barrel Room or the reinforced wall on the Maintenance.   Since the Bombsite is on the first floor, the offensive team may attempt a vertical play through the bottom of the 2F. However, the 2F Initialization Room is made of unbreakable material, so the Throne Room side is safer from vertical play. Only be careful when you hide in the Armory. 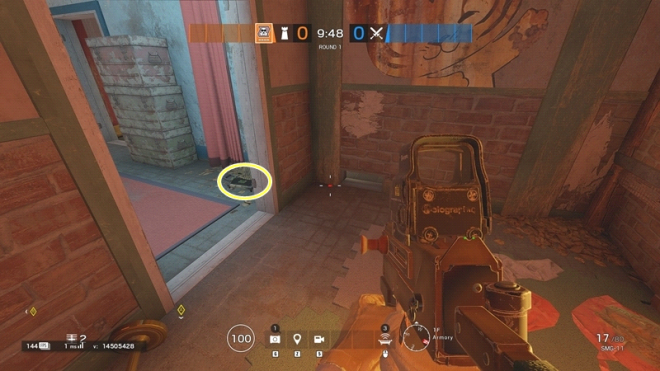 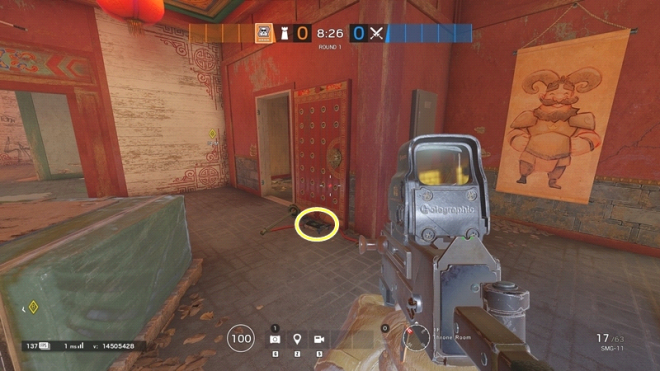 ▲ Let’s install another Signal Disruptor on the opposite side, the entrance of the Throne Room too. 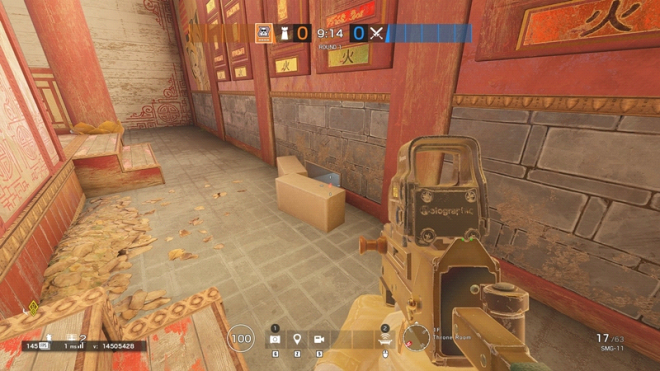 ▲ However, there are many drone holes outside, so we can’t only rely on Signal Disruptors. 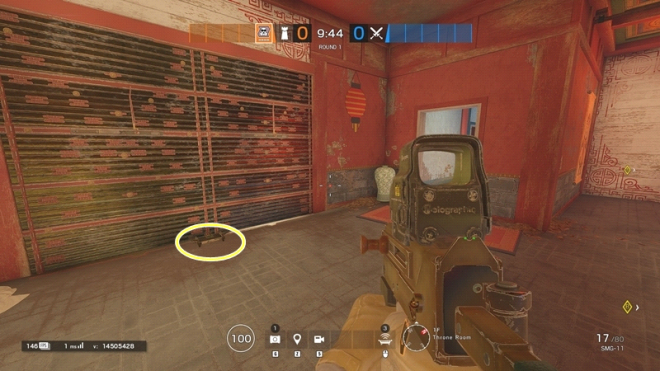 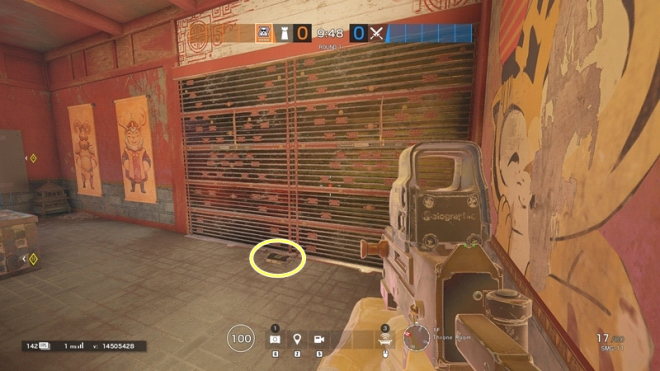 ▲ Or try to breach the reinforced wall of the Maintenance at the opposite side. You’ll have to install a Signal Disruptor if there are no Bandit or Kaid in the team.     ▣ In case, the site is ‘1F Lab ~ 1F Storage’   Unlike ‘Throne Room ~ Armory’, ‘Lab ~ Storage’ is a very small area and there is even a window connected to the outside, so there is a considerable lack of space for the defensive team to hide. To make things worse, both the floors of the 2F Cafe and the Upper Arcade are made of breakable materials, so there is a risk of being attacked by vertical play. Because of these points, the defensive team here tends to minimize the number of anchors (*the role of waiting around the Bombsite without moving) inside the Bombsite and use many roamers.   When the game starts, install a Signal Disruptor around the Lab, Storage, and the Arcade Toilet to block the drone. Mute is a 2 Speed / 2 Armor Operator and has a lot of work to do during the Preparation Phase, so he is more suitable for an anchor role than a roamer. However, when there are too many people inside the Bombsite, it is also possible to play the role of a roamer by hiding near the cafe on the 2F. If you have any Signal Disruptor left at this time, it would be good to use it on the 2F to support the roamers. 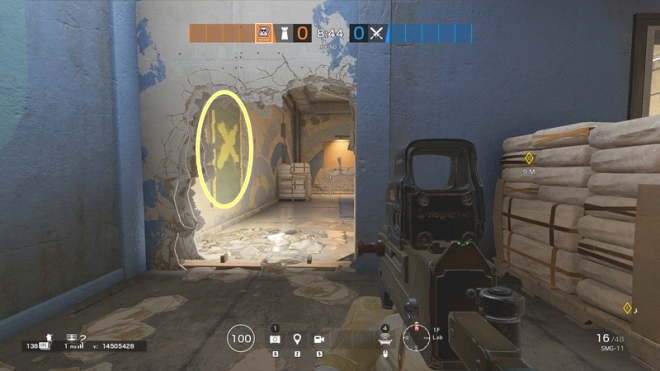 ▲ The attackers sometimes enter through the Storage window, so let’s make a hole to check them. 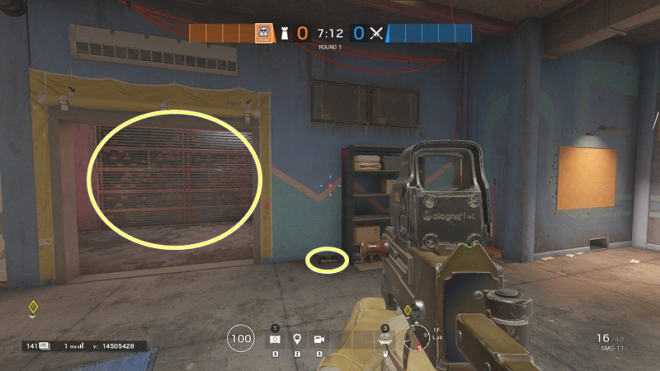 ▲ I recommend not to break the wall of the Barrel Room in front of the Lab. 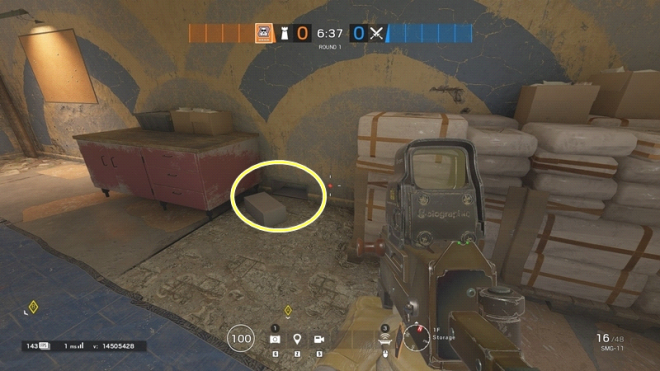 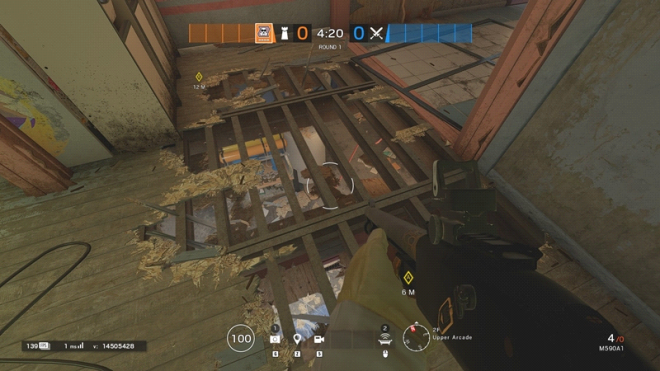 ▲ The safe area gets smaller if the offensive team does vertical plays on the 2F. 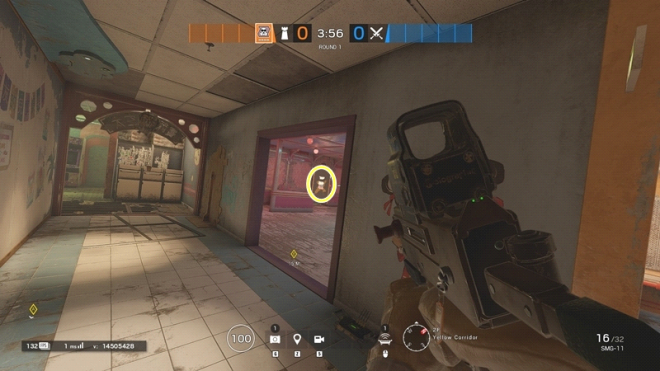 ▲ So it is better to line up the team members on the 2F and defense from the beginning.