Guide for playing 'Kapkan' on 'Villa'. 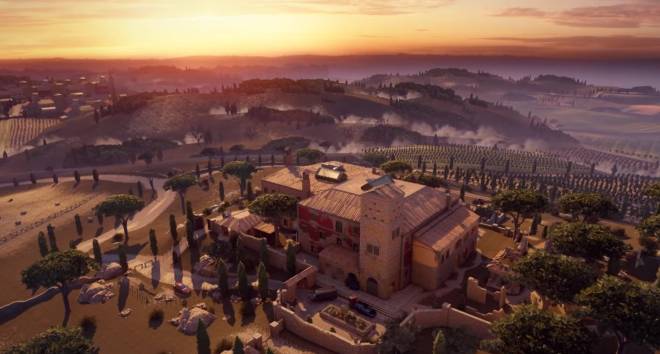 [DISCLAIMER: This guide is intended to be as bare bones as possible in order to give general advice to any new Rainbow Six: Siege players. In addition to this article being opinionated, I would like to also state that zero-sum strats in this game do not exist and the tell of a good Siege player is their decision making and adaptation to the changing battlefield.]     Villa is a triple-level map (consisting of three floors) found both in ranked play as well as professional. The current architecture of the map gives a slight advantage to the defending team due to there being few routes into the primary bomb sites forcing attackers to bottle neck. In addition to this, Villa is a very large map which makes roam control very difficult for the attacking team.   Kapkan is a two speed, two armor, defending trap operator. His ability is the ‘entry denial device’ (commonly referred to as an EDD) which consists of a booby-trap-like explosive device which can be anchored on doorways and windows and then later triggered by unassuming attackers walking through these doorways. Kapkan is similar to Frost in so far as the operator pick will be much more effective if attackers don’t know that defenders brought him/her. This is because, if attackers know there are trap operators like Frost or Kapkan, they will be much more cautious when maneuvering throughout the objective building so as to not trigger the traps. Generally, Kapkan will be most useful for defenders by dealing damage over the course of the round while the attacking team executes a full roam clear of the objective building due to the traps only dealing about 50HP each. However, this will provide Kapkan with the maximum number of doorways to place EDD’s - allowing the player to place them randomly throughout the building instead of all in one central location.   If you are to be in accordance with current meta, Kapkan’s loadout should be as follows: PRIMARY: 9X19-SMG (Attachments to player preference) SECONDARY: PMM (Attachments to player preference) UTILITY: NITRO-CELL (This will be commonly used for plant denial)     DEFENDING: [2F] AVIATOR(A) - GAMES(B) The primary route of attack on this bomb site will be by the attacking team entering the building through the outdoor Study Balcony located on the second floor of the south side of the building. After establishing control over Study and the top of Main Stairs, attackers will proceed to breach the reinforced wall separating Study and Games(B) (being the westward facing reinforced wall inside of Study). This will allow the attacking team to plant the defuser inside of Games(B) behind the bar; providing attackers with a safe place to plant the defuser. Kapkan should place EDD’s throughout the 2F-Master Bedroom, 2F-Bathroom, 2F-Trophy, and 2F-Stat rooms. This will assist the whole of the defending team by providing teammates with an audible que to alert them to attacking flanks coming from the northern portion of the second floor. Kapkan can also be an effective first floor roamer due to the operator having a nitro-cell for utility. Communicating with intel operators like Pulse or Valkyrie can help you accurately use your explosive on the flooring underneath attackers inside of ‘Study’ or ‘90’. EDD PLACEMENT: [2F] AVIATOR(A) - GAMES(B) 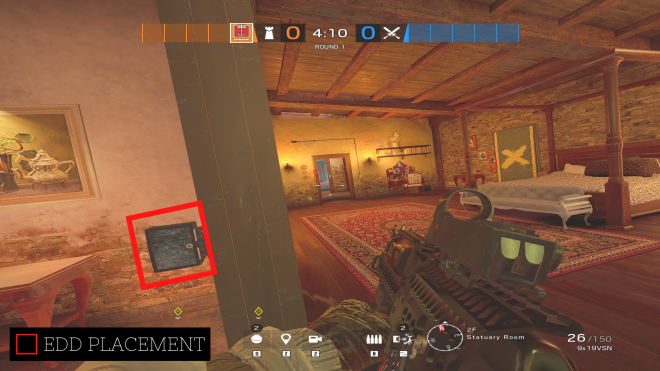 DEFENDING: [2F] TROPHY(A) - STATUARY(B) The primary route of attack on this bomb site will be by the attacking team entering the building from the north eastern roof access points leading into the second floor Bathroom and Master Bedroom. After establishing control over Master Bed and Bath, attackers will proceed to breach the reinforced wall separating Master Bedroom from Statuary(B) as this will expose both Statuary(B) and Trophy(A) as well as providing attackers with a more open route into Statuary(B) to plant the defuser. Kapkan should place EDD’s throughout the southern portion of the second floor; effectively accomplishing the same role as the previously mentioned Bar-Games bomb site. This will help alert the defending team to any possible surprise flanks coming from Red Stairs or 90-Long Hall. Knowing whether or not attackers will be flanking from the top of Red Stairs becomes particularly important for operators like Bandit or Kaid as they are incredibly vulnerable to the Red Stairs Landing flank when they are attempting to ‘trick’ the Stat(B) wall. EDD PLACEMENT: [2F] TROPHY(A) - STATUARY(B) 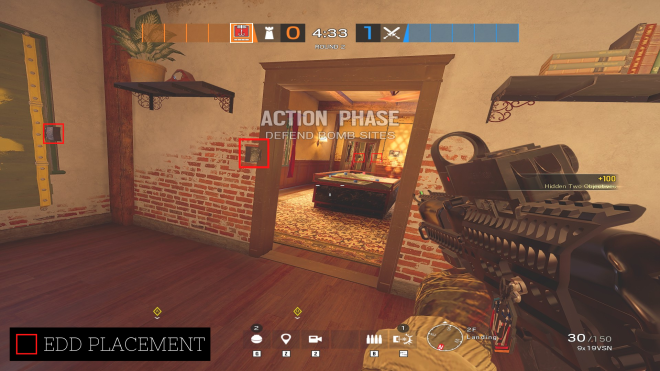 DEFENDING: [1F] LIBRARY(A) - LIVING ROOM(B) The primary route of attack on this bomb site will be by the attacking team entering the building from the south and gaining control over the Main Stairs, Art Storage, and Main Hall. After establishing the necessary control over the first floor needed to move the attacking round forward, attackers will commonly attempt to plant the defuser inside of the Library(A)-Main Entrance doorway. Attackers will also want to gain control over the second floor Games and 90 (in addition to 90’s subsequent hallways) as the flooring of these rooms can be destroyed to provide attackers with vertical angles down onto the first floor bomb sites. Kapkan should place EDD’s throughout the southern portion of the first floor - inside of Piano, Red Hall, Art Storage, and Main Entrance. This will help slow the attacking coming push from the front door and Art Storage. Kapkan should play inside of the Living Room bomb site as this will position the operator to counter attackers on the second floor attempting to breach the ceiling and expose friendly defensive positions. Use Kapkan’s nitro-cell to counter attacking soft breachers from destroying the ceiling of the bomb site. EDD PLACEMENT: [1F] LIBRARY(A) - LIVING ROOM(B) 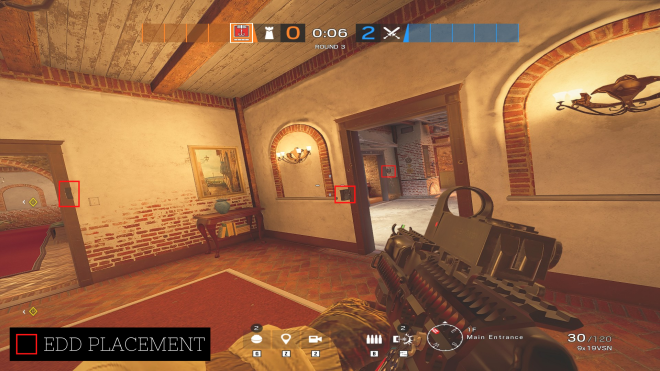 DEFENDING: [1F] DINING(A) - KITCHEN(B) The primary route of attack on this bomb site will be by the attacking team entering the building through the Basement and first floor Laundry. The primary force of attackers will be focused on the reinforced wall separating Laundry room and Dining as well as control over the second floor for vertical control. Having control over the top of Pantry Stairs will limit defenders ability to rotate throughout the two bomb sites as the Pantry Doorway provides anybody inside of Pantry with a clear line of sight through Kitchen(B). Kapkan should place EDD’s throughout the basement of the objective building - particularly in and around the basement level pavilion. Attackers will commonly breach into the basement very quickly as a way of establishing an early foothold to propel further attacker control. Attackers will typically have a heavy presence on the Panty Stairs as control of this room will offer great horizontal site control for the attacking team. Kapkan should be able to deal some significant damage to attackers early into the round if the attacking team breaches the basement recklessly. EDD PLACEMENT: [1F] DINING(A) - KITCHEN(B) 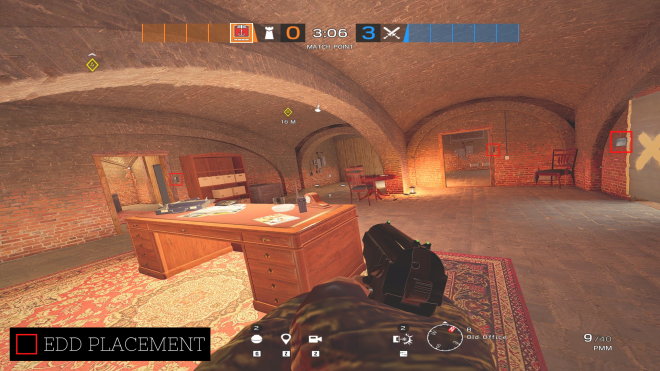