Guide to playing ‘Thatcher’ in Bank

Bank is a building consisting of the basement, 1F and 2F, a slightly large battlefield adding those three floors. The objective location is generated one on 2F, two on 1F, and the last one in the basement. Vertical plays can be seen restrictively from 2F to 1F, but not from 1F to the underground since the floor on 1F is made of unbreakable material. Due to the following reasons, the defenders most likely prefer the basement to be the objective location.   There is a lobby area on 1F that makes it larger than the other two floors. Due to this area, there are many places where the defender roamers can hide. The offensive team must use their drones to make a thorough reconnaissance and attempt the entry. On the other hand, 2F and the basement are a little narrow; the route of the offensive team is constant. 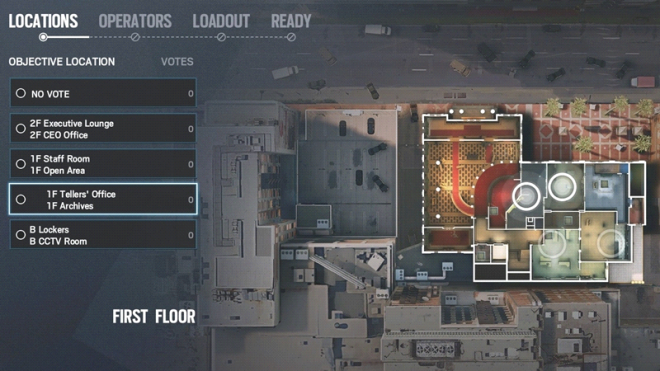 ▲ Bank’s Objective Location, many different ways of offensive can be seen since the characteristics on each floor are all different.     Thatcher is an operator who can use EMP Grenades that can destroy or deactivate all of the defender’s electronic devices. He often acts together with the team’s hard breacher in order to safely destroy the Shockwire or Electroclaw installed by Bandit and Kaid on the opposite side of the reinforced wall. In addition, throwing the EMP grenades where it’s likely to be equipped with a lot of electronic devices or deactivating camera devices such as Echo’s Yokai drone or Maestro’s Evil eye can be used for purposes.   Thatcher can select among three kinds of weapons, AR33, L85A2 Assault Rifle, and M590A1 Shotgun, for his main weapon. Having a long shooting range and ACOG sight can be attached; most players prefer choosing one of these two weapons. Comparing those two, AR33 can attach angled grip and has a high fire rate value, L85A2 has low recoil and a thirty-shot bullet capacity. Players can choose by their own tastes between these two. 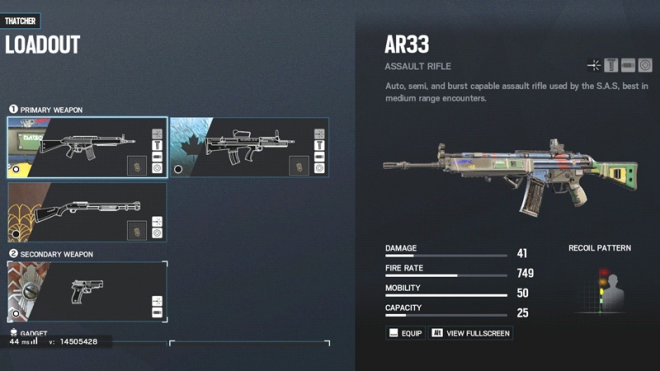 ▲ Sometimes players go on rush plays with non-scaling sight equipped AR33 that can attach angled grip.     ▣ In case, the site is located at ‘2F Executive Lounge ~ 2F CEO Office’   If the bombsite is generated on 2F, Thatcher and team are hard breachers mostly be better to enter to Skylight Stairwell on 2F and breach the reinforced wall that is connected to the CEO Office. By breaching that wall, the offenders can have a great advantage securing an angle to check the bomb site at the Skylight Stairwell. However, the defenders will also use Bandit trick or Impact grenade trick trying to stop the wall from breaking.   If some of the offensive team members enter the Stock Trading Room, it is easy to take control of the Hallway with the members from Skylight Stairwell. Furthermore, they can attack from many other ways by checking the bombsite while doing rappel play at the exterior window of the CEO Office or doing long-range sniping in the direction to the Lobby. Depending on the situation of the battlefield, we must take places where we can attack from various angles and put pressure on the bombsite. ▲ The most important point while attacking 2F, ‘Skylight Stairwell reinforced wall breaching’. The defenders will also be very resistant. 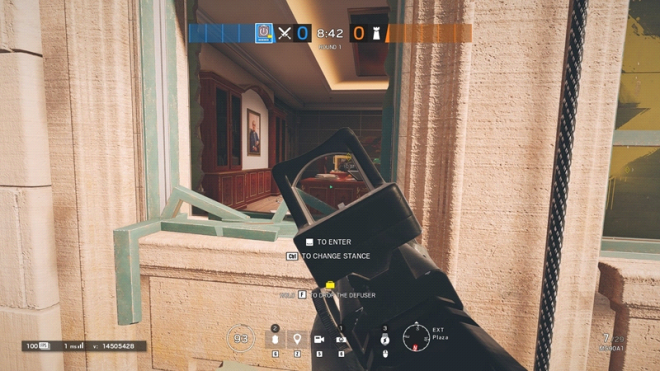 ▲ If the breaching is blocked by Bandit trick or Impact Grenade trick, you can be able to get rid of it yourself through the CEO Office window. 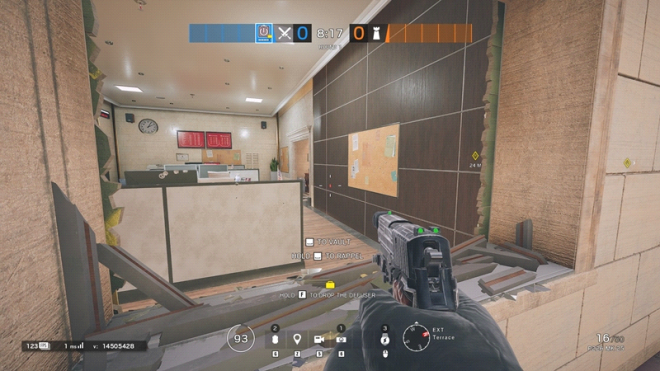 ▲ It will be better if you have members from Terrace to break the Stock Trading Room window and occupy it. ▲ If you have taken control of the Skylight Stairwell and Stock Trading Room, you can naturally be able to secure the angle to the Hallway. ▲ If you successfully secured the Hallway, you can go into the Janitor Closet and make a new angle through the CEO Office.     ▣ If the site is ‘1F Staff Room ~ 1F Open Area’   This place is the widest bombsite area among all the Objective Location of Bank. There are two big-size entrances and an exterior window connected to the Printer Room where offenders can attack through. If the team uses a hard breacher, it will better to breach reinforced walls on 1F Archives through the Admin Office which is located right next to the Open Area or breach the three hatches located on 2F. However, if there are no Electroclaw attached by Kaid, Thatcher doesn’t really have to go together when breaching the hatches on 2F.   Thatcher is good to play a role getting along with the team’s hard breacher and supporting them by destroying Shock Wire and Electroclaw on the back of the reinforced wall like other places. Mentioned above, 1F has a large scale comparing with the others and many places that roamers can hide. Therefore, attackers must always be careful of an ambush while heading towards the target point. Attackers must move covering each other’s angles. If you are nervous, you can install some Claymore Mines on your way. 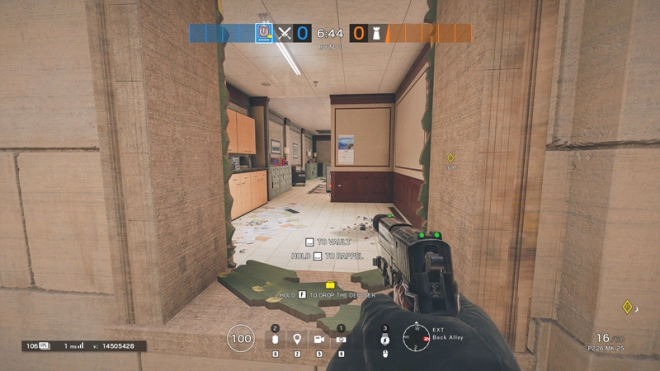 ▲ There is an exterior window right beside the Open Area connected to the Printer room, it is a good way to begin. 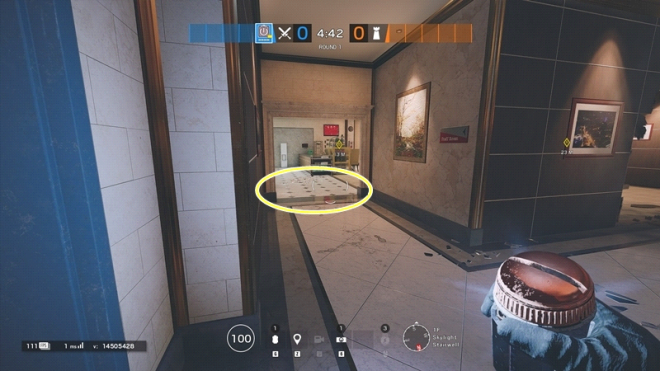 ▲ The Staff Room entrance is where many gadgets are being installed by the defensive team, you can have beneficial effect when using one of the EMP Grenades. 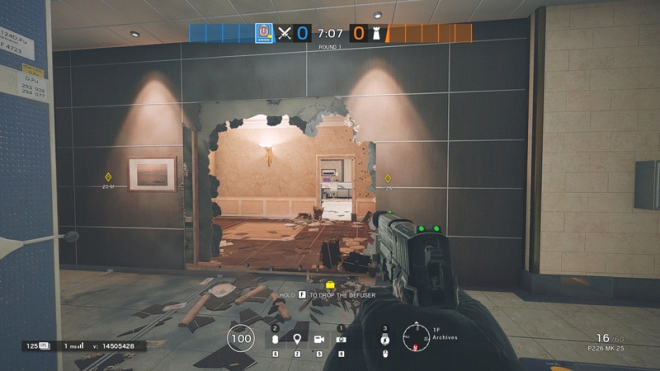 ▲ Let’s help to breach the reinforced wall at the Archives connected to the Admin Office. ▲ There are three hatches connected to the bombsite on 2F, attackers can have a huge advantage if they destroy them all. ▲ It is able to do a restrictive vertical play if you attach the Breach Charge on the Stock Trading Room floor.     ▣ If the site is ‘1F Tellers’ Office ~ 1F Archives’   Different from the other 1F bombsite, the area is small and there are no hatches connected to the 2F. However, the reinforced walls that hard breacher can breach are still remaining. I recommend acting together with them and help them with the breaching. Like we did the breaching at the Archives when the bombsite was located on the Open Area, this time we must do the breaching at the Open Area to make a hole towards the Archives.   Otherwise, there are ways to open a new angle by breaching the reinforced wall at the Office Hallway through Tellers’ Office or doing vertical plays at the 2F such as the Conference Room, Executive Lounge, and CEO Office. If Thatcher brings breach charges, he can attach it on the 2F floor to do vertical plays. No matter where you start your attack 1F, you must always beware of roamers and mustn’t forget to remove the defensive team’s trap or other dangerous sources by throwing EMP Grenade. ▲ 2F Skylight Stairwell is a good place to attack but it is also a risky place that can be attacked from many other angles. 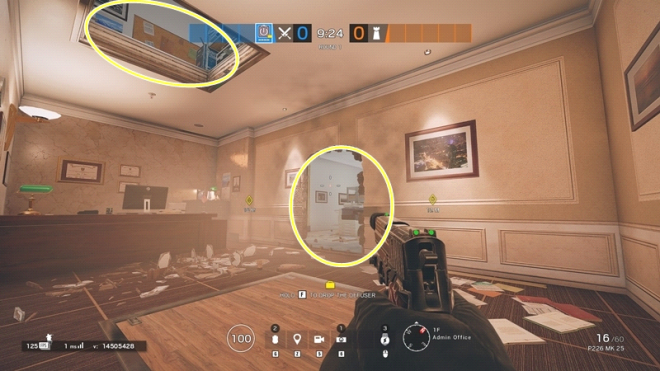 ▲ Contrary to the past, you can penetrate into the Open Area and breach the reinforced wall. But always beware of the 2F hatch! ▲ It is efficient to breach the reinforced wall at the Office Hallway. 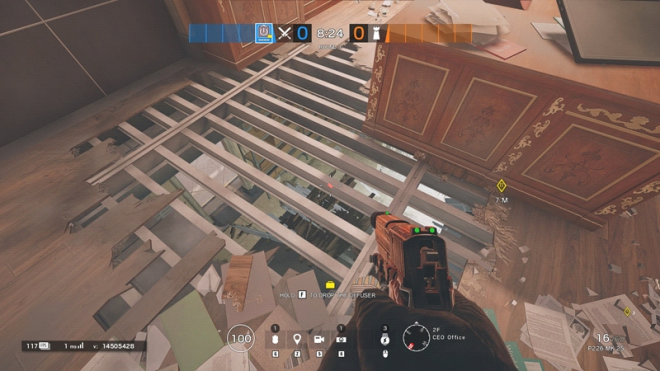 ▲ If you attach a Breach Charge around the CEO Office’s desk on 2F and blow up, you can secure the angle of the Archives entrance. ▲ On the contrary, if you blow up the floor of the Conference Room, you can secure the angle of the Tellers’ Office.     ▣ If the site is ‘B Lockers ~ B CCTV Room’   There no window or door connected to the basement and it is impossible to do a vertical play due to the floor on 1F is all made of unbreakable materials. For these reasons, the offensive team must do drone reconnaissance from time to time after entering inside the building and moving towards the bombsite not to get caught their back by the defender’s roamer.   If the offensive team is spawned at the Jewelry Front, they can get to the Server Room right away through the Sewer by using the manhole right in front of the spawning area. The attack is available after breaching the reinforced wall at the CCTV Room, throwing Smoke Grenades, or installing Defuser. However, it will not be easy to attack as the defensive team can also install Mira’s Black Mirror in an angle they can see the CCTV Room or putting a roamer at the Server Room Stairs.   It is good to make new angles by other offensive players to attack the Bank Garage or another hard breacher operator to open the hatch on the 1F. If the defensive team selected Kaid, they would probably have Electroclaw attached at the hatch, Thatcher must go together to the hatch and remove it. 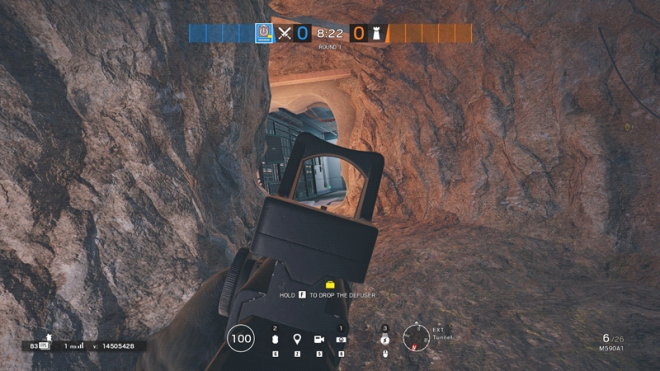 ▲ If the offensive team is spawned at the Jewelry Front, they can get to the Server Room safely through the Sewer. 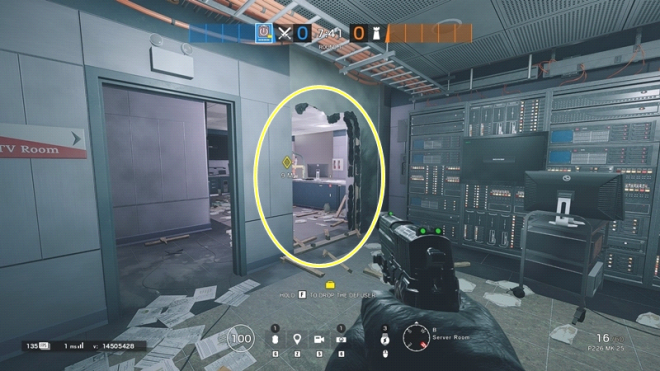 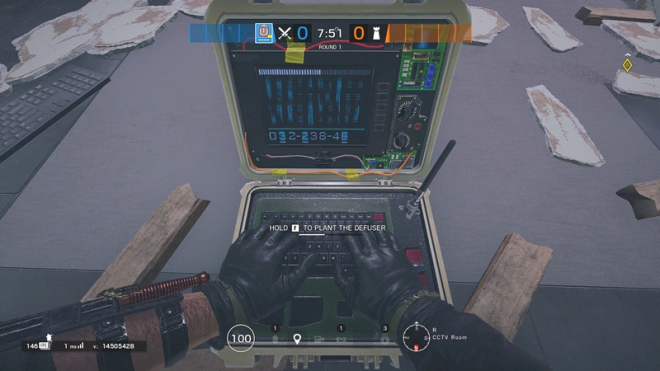 ▲ You can install your Defuser under cover of a desk, but be aware of the Nitro Cell flying in! ▲ It will be easier to attack if you open the 1F Admin Office hatch and watch the Server Room together. ▲ It is a way to make a surprise attack while others are engaging in the Server Room.