Guide for playing 'Kapkan' on 'Kafe'.

[DISCLAIMER: This guide is intended to be as bare bones as possible in order to give general advice to any new Rainbow Six: Siege players. In addition to this article being opinionated, I would like to also state that zero-sum strats in this game do not exist and the tell of a good Siege player is their decision making and adaptation to the changing battlefield.]     Kafe is a triple-level map (consisting of three floors) found both in ranked play as well as professional. The current architecture leaves the map fairly balanced since the rework of the map   Kapkan is a two speed, two armor, defending trap operator. His ability is the ‘entry denial device’ (commonly referred to as an EDD) which consists of a booby-trap-like explosive device which can be anchored on doorways and windows and then later triggered by unassuming attackers walking through these doorways. Kapkan is similar to Frost in so far as the operator pick will be much more effective if attackers don’t know that defenders brought him/her. This is because, if attackers know there are trap operators like Frost or Kapkan, they will be much more cautious when maneuvering throughout the objective building so as to not trigger the traps. Generally, Kapkan will be most useful for defenders by dealing damage over the course of the round while the attacking team executes a full roam clear of the objective building due to the traps only dealing about 50HP each. However, this will provide Kapkan with the maximum number of doorways to place EDD’s - allowing the player to place them randomly throughout the building instead of all in one central location.   If you are to be in accordance with current meta, Kapkan’s loadout should be as follows: PRIMARY: 9X19-SMG (Attachments to player preference) SECONDARY: PMM (Attachments to player preference) UTILITY: NITRO-CELL (This will be commonly used for plant denial)     DEFENDING: [3F] BAR(A) - COCKTAIL(B) The primary route of attack on this bomb site will be by the attacking team gaining control over Cigar as this will allow attackers to breach the reinforced wall separating Cigar and Freezer and, in turn, flush out any defenders playing inside of Freezer. After eliminating defenders inside of the Freezer, attackers will attempt to plant the defuser under the cover of smoke behind one of the wooden counters inside of Bar(A). Kapkan should place EDD’s throughout the third floor, placing EDD’s inside of Christmas-Cigar in particular will likely yield the best results. Due to attackers commonly centering their assault inside of Cigar, Kapkan can help counter this by preemptively placing EDD’s inside of the double doorway between Cigar and Christmas as well as on the windows of Christmas. Kapkan should play on the second floor inside of Train and Mining as this will position you to use a nitro-cell on attackers while they attempt to breach the wall between Cigar and Freezer. EDD PLACEMENT: [3F] BAR(A) - COCKTAIL(B) 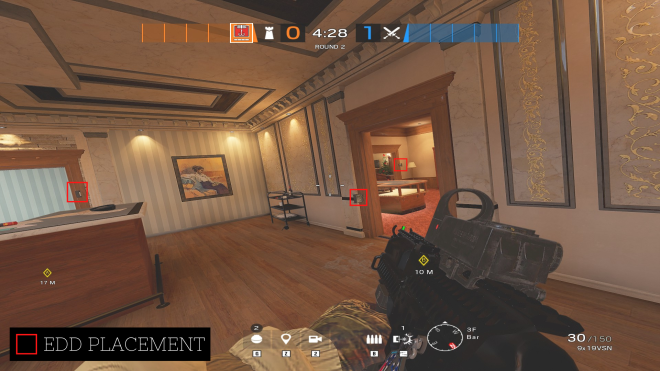 DEFENDING: [2F] READING(A) - FIREPLACE(B) The primary route of attack on this bomb site will be basically identical to attacking Fireplace and Mining. Attackers will prioritize control over the third floor as this will allow for vertical pressure on the defending anchors. Due to this bomb site and the previously mentioned Fireplace-Mining bomb sites being almost identical in play-style, Kapkan will also be played almost identical to the way in which the operator was played on this previous bomb site. It is recommended to stay on the second floor when playing these two bomb sites if you have a nitro-cell. This is because nitro-cell can be very effective in eliminating attackers while they are establishing control over the third floor. Defenders using nitro-cells can sometimes even pick up a collateral on attackers if the attackers do not properly spread themselves out in anticipation of a nitro-cell. EDD PLACEMENT: [2F] READING(A) - FIREPLACE(B) 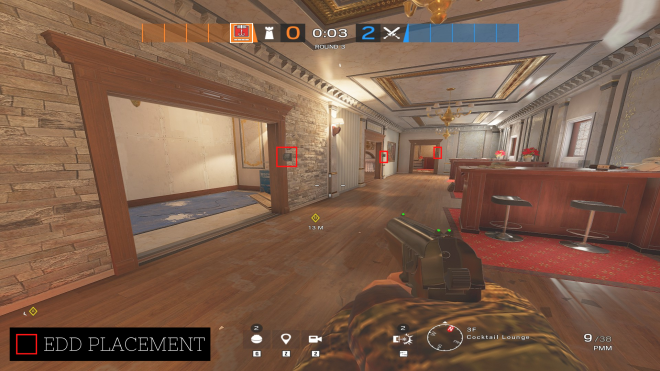 DEFENDING: [1F] SERVICE(A) - COOKING(B) The primary route of attack on this bomb site will be by the attacking team gaining control of large and small Bakery, this will allow attacking hard breachers like Thermite and HIbanna to breach the reinforced wall between Cooking(B) and large Bakery. It is common for defenders to Kaid or Bandit trick the bakery-cooking wall as defending Cooking(B) is almost impossible to do after the wall has been opened. Kapkan should place EDD’s throughout the entirety of the second floor inside of Reading, Mining, Fireplace, and Train. This will help defenders by significantly decreasing the HP of attackers attempting to clear the second floor. This will also benefit defenders on the bomb site who have brought nitro-cell because, as attackers trigger EDD's, their position on the second floor is revealed to defenders on the first floor. This provides defenders with the unique ability to know exactly where to use their nitro-cell to eliminate the attacker. EDD PLACEMENT: [1F] SERVICE(A) - COOKING(B)