Guide for playing 'Amaru' on 'Kafe'.

[DISCLAIMER: This guide is intended to be as bare bones as possible in order to give general advice to any new Rainbow Six: Siege players. In addition to this article being opinionated, I would like to also state that zero-sum strats in this game do not exist and the tell of a good Siege player is their decision making and adaptation to the changing battlefield.]   Kafe is a triple-level map (consisting of three floors) found both in ranked play as well as professional. The current architecture leaves the map fairly balanced since the rework of the map.   Amaru is a two-speed, two-armour attacking operator. Her ability is a “high-tensile grappling gun” which can be used to quickly access entry points on the objective building as well as vault up open hatches. Unfortunately, Amaru is an entirely useless operator - the utility the operator brings is not impactful at all for the whole of the attacking team and is overall considered to be a highly situational operator (situational; meaning that the operator has almost zero versatility and is only useful in select situations which rarely occur.) That being said, I will still be writing a guide for the operator on all ranked maps. However, these guides will be used to offer a more comprehensive overview of how entry fragging should be carried out for new players looking to improve.   If you are to be in accordance with the current meta, Amaru’s loadout should be as follows; - PRIMARY: G8-LMG (Attachments to player preference) - SECONDARY: SMG-11 (Attachments to player preference) - UTILITY: FLASH BANG GRENADES (This can actually be useful for the attacking team as it will allow you to assist teammates in burning Jager’s ADS.)     ATTACKING: [3F] BAR(A) - COCKTAIL(B) The primary route of attack on this bomb site will be by the attacking team gaining control over Cigar as this will allow attackers to breach the reinforced wall separating Cigar and Freezer and, in turn, flush out any defenders playing inside of Freezer. After eliminating defenders inside of the Freezer, attackers will attempt to plant the defuser under the cover of smoke behind one of the wooden counters inside of Bar(A). Amaru’s utility will only be useful as far as it will allow the player to quickly access the roof from spawn. This is really only a preventative advantage as all it does is prevent defenders from being able to eliminate you while repelling to the roof to access the building from the hatch access points. Other than a fast breach, Amaru will be useful for acting as an entry fragger while attackers are establishing control inside of Cigar and Christmas. An argument could be made for Amaru being useful here as the operator can quickly breach the Christmas Tree window from spawn. However, this is a very rare advantage as defenders almost always allocate a large amount of players and resources inside of Christmas at the beginning of the round.   PARK SPAWN LOCATION 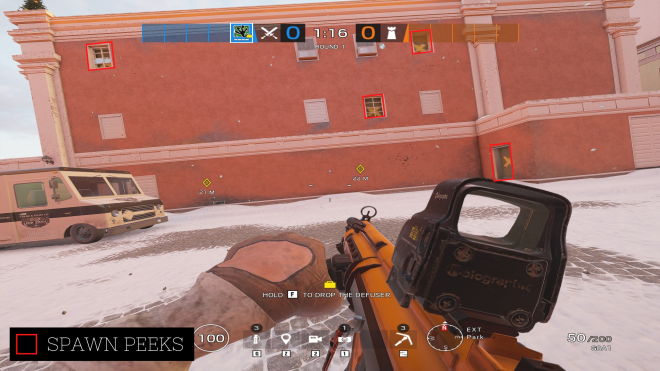 ATTACKING: [2F] FIREPLACE(A) - MINING(B) The primary route of attack on this bomb site will be by the attacking team gaining control of the third floor as the entirety of the ceiling of Fireplace(A)-Mining(B) is able to be destroyed by attacking soft destructors from the third floor. Amaru should be used as an entry fragger while establishing control over the third floor. Use the operators grapple hook to quickly access the roof of the building and communicate with teammates in droning the entirety of the third floor Cocktail, Bar, Freezer, and Christmas rooms. After gathering intel on the third floor, Amaru should be the first attacking operator inside of the building as the team's entry fragger(s) will be responsible for leading the initial assault into the objective building.   CHRISTMAS SPAWN LOCATION ATTACKING: [2F] READING(A) - FIREPLACE(B) The primary route of attack on this bomb site will be basically identical to attacking Fireplace and Mining. Attackers will prioritize control over the third floor as this will allow for vertical pressure on the defending anchors. As previously mentioned, the role Amaru will play on this bomb site will be essentially identical to the previous bomb sites. This is because the two second floor bomb site locations (Reading-Fireplace and Fireplace-Mining) have almost an identical defensive layout. Meaning that defenders will allocate their resources to the same places, regardless of which second floor bomb site is being played. For these reasons, the most effective way to play Amaru on these two bomb sites will be by clearly communicating with teammates while establishing third floor control as Cocktail-Bar control will invariably dictate the outcome of the round.   DOCKS SPAWN LOCATION 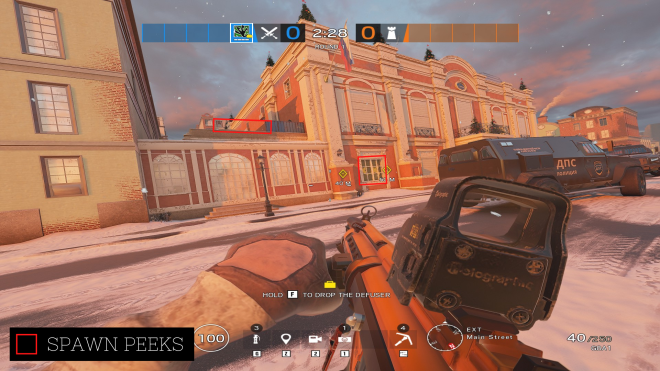 ATTACKING: [1F] SERVICE(A) - COOKING(B) The primary route of attack on this bomb site will be by the attacking team gaining control of large and small Bakery, this will allow attacking hard breachers like Thermite and HIbanna to breach the reinforced wall between Cooking(B) and large Bakery. It is common for defenders to Kaid or Bandit trick the bakery-cooking wall as defending Cooking(B) is almost impossible to do after the wall has been opened. Attackers like Amaru, Sledge, and Buck should be prioritizing control over the second floor, in particular the Mining and Train rooms. These two second floor rooms will be very important for attacking soft destructors as it will allow operators like Buck or Sledge to prevent defenders from tricking the main Bakery wall. This will, in turn, allow the attacking teams hard breacher (Thermite, Hibanna, or Ace) to breach the wall and plant the defuser inside of Cooking(B).   Thank you for reading and I hope this was helpful for you guys.   If you are interested in more content or want to ask me questions, you can always find me on my social media accounts: TikTok - FTWRK Twitch - footwork6