Guide to playing ‘Thermite’ in ‘Consulate’

Consulate is a slightly large-sized battlefield consisting of basement, 1F, and 2F. The objective locations are generated one on each floor and uniquely have a feature of a double-decker site created in the basement and 1F. However, this double-decker site does not appear because the defenders do not prefer defending this site due to the wide range of coverage.   It is also notorious for its frequent spawn-kill attempts by the defenders due to its large number of windows throughout the outer walls of the building. However, it is a factor that can also be used as the attacker’s checking point or entrance. The only thing to concern is that there are no windows in the basement. Instead, the Garage has a wall connected to the outside, so if the offensive team operates a hard bridge, they will definitely attempt breaching that wall to take the advantage. 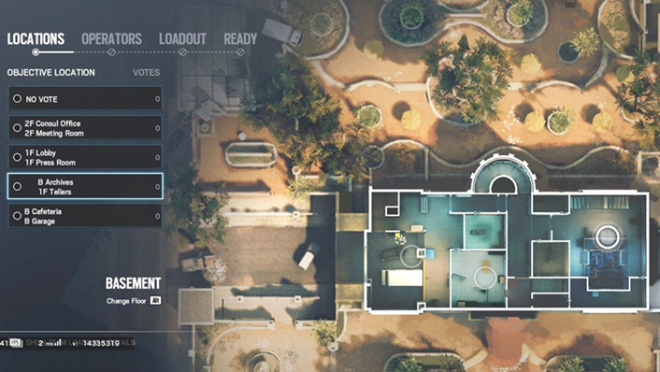 ▲ Consulate has a unique style of objective location, which is generated one on the basement Archives and the other one on the 1F Tellers.     Thermite is the most representative hard breaching operator among the attackers, which can create a new angle by installing its dedicated explosive (*Exothermic Charge) on walls or hatches. Currently, there are four hard breachers in the offensive team, including Thermite, Hibana, Maverick, and Ace, all four of which tend to pick depending on the situation because of the time and constraints required for breaching work are all different. Depending on the battlefield, two or more can be used.   Thermite installs its dedicated explosive, Exothermic Charge, directly on the point to breach a certain area. It is often necessary to have some assistants because Thermite has to approach the breaching point directly and are vulnerable to the enemy’s attacks while proceeding the breaching work. However, if the breaching work succeeds, it creates the biggest hole compares to any other operators. Therefore, it is the best hard breacher in a situation where the safety is secured, like the Garage external reinforcement wall of Consulate.   Thermite can use 556XI Assault Rifle and M1014 Shotgun as Primary Weapon, which is usually select the 556 XI that can attach the ACOG sight. As mentioned earlier, Consulate provides a good chance of spawn-kill and mid-range skirmishes are frequently occur. Therefore, the function of ACOG sight is highly necessary for this battlefield. 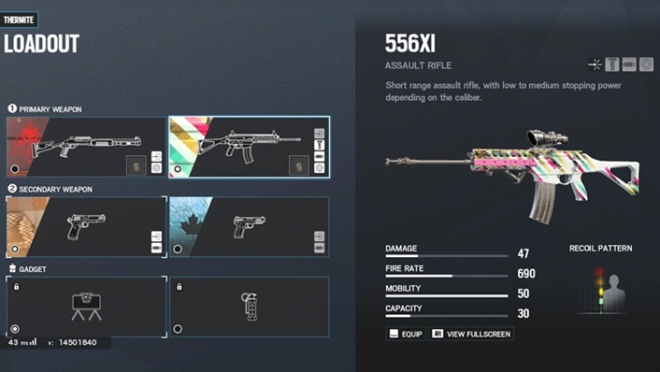 ▲ 556XI decent Assault Rifle. Because it can attach the ACOG sight, players usually pick this weapon.       ▣ In case, the site is located at '2F Consul Office ~ 2F Meeting Room'   If the bombsite is located on the 2F, the attackers can only approach through the 2F windows or the stairs. Also, the area of each floor is not very large, making it easier for the defenders to detect the attackers entering, and the stairs will also be difficult if the defenders keep checking it. So, it's a very tricky objective location for the attackers.   There are no suitable places to attach the Exothermic Charge, but if you really want to use, you can use it on the Press Room reinforced wall from the Exit Stairs or the Meeting Room reinforced wall from the Main Stairs Hallway. However, both places are widely exposed, making Thermite be vulnerable while breaching, so not often tries breaching here.   One thing you need to concern while breaching the Exit Stairs, is the longer you drag time, the more you be in danger. Since there are three stairs connecting the 1F ~ 2F, the defending roamer can detour and surprise attack from the opposing side. Therefore, make sure you ask your team to check the stairs when proceeding breaching work. ▲ When targeting the 2F, one of the teammates should check this area. However, because this place is quite risky, Thermite should not take this potion. 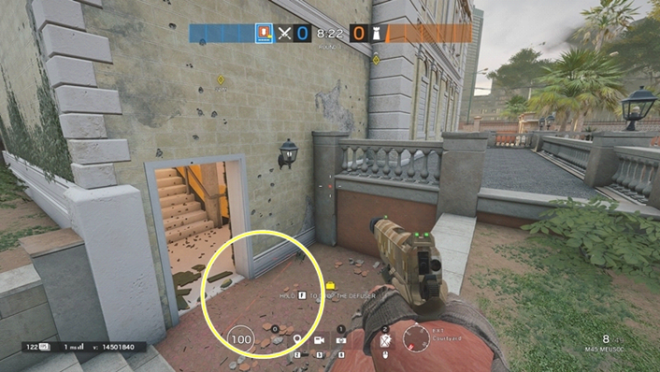 ▲ If you rappel near this entrance, install the Claymore Mine on the Exit Stairs entrance to prevent the enemy run-out play. 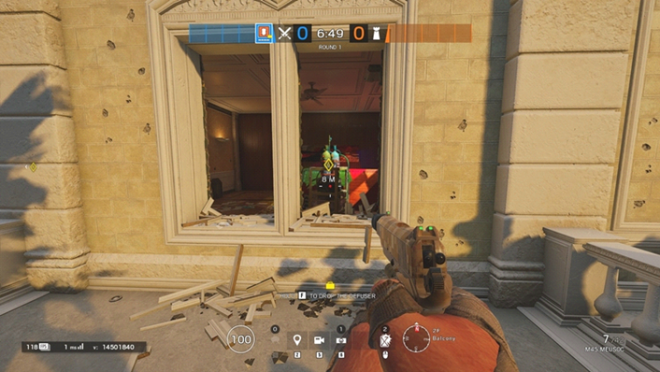 ▲ Or, you can move up to the 2F Balcony and check the Meeting Room. 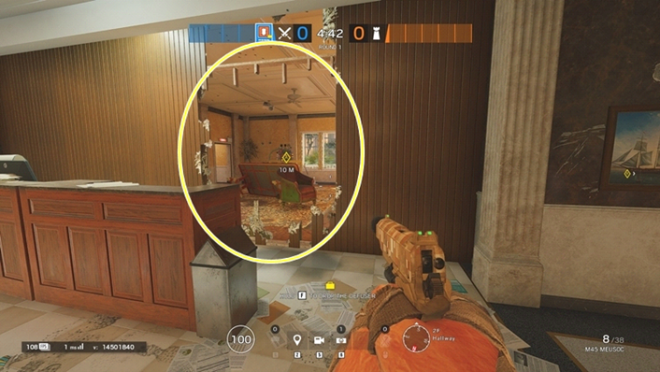 ▲ You can breach the Meeting Room wall from the Hallway, but because this area is too exposed, players not often try. ▲ If you breach the Exit Stairs reinforced wall, you can seize an effective angle, but still risky.       ▣ In case, the site is located at '1F Lobby ~ 1F Press Room'   It has a unique structure where you can see the Lobby Bombsite directly when you break the main entrance barricade on the first floor. However, if you enter the Lobby immediately, the defender waiting from the public Bathroom or Antechamber can attack you. Also, this entrance will be full of Barbed Wire and other defensive gadgets, making it difficult to enter.   Occasionally, the defender makes a hole in the 2F Meeting Room and waits until the enemy entering the Lobby. In this case, the team should clear the 2F to seize safety. After the 2F safety is secured, the team can drop through the hatches on the 2F. The hatches are located on the 2F Meeting Room and Consulate Office.   If you take a risk, it's also a good idea to infiltrate the 1F West Corridor and breach the Public Bathroom reinforced wall. The Public Bathroom is not only located in the middle of both Bombsites but also is a place where the defending anchors such as Maestro and Echo usually hide, so it would be a great advantage if you pierce it. 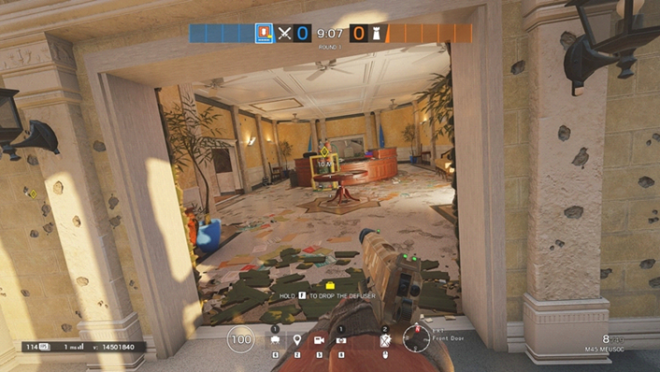 ▲ If you open the 1F main entrance barricade, you can directly look at the Lobby Bombsite... 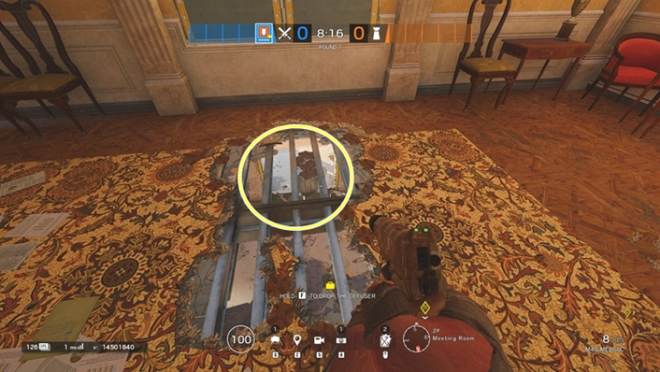 ▲ But if you rush, you will be attacked by the defender waiting on the 2F, so check the upper floor situation first and enter. ▲ The 2F Meeting Room hatch allows the player to look down the Lobby, and 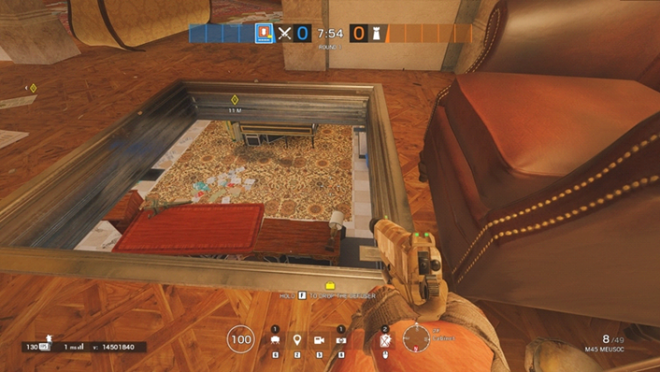 ▲ The 2F Cabinet hatch also provides the vision of the Press Room, so targeting the 2F could be the key factor to achieve the victory. 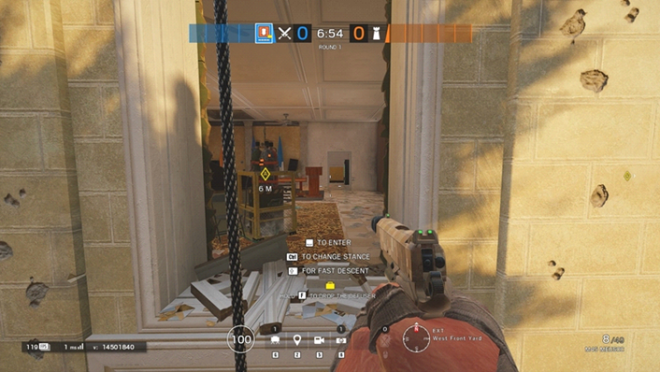 ▲ You also can check inside the 1F Press Room through the window. ▲ It is risky, but infiltrating into the West Corridor and breaching the Public Bathroom is another good strategy.       ▣ In case, the site is located at 'B Archives ~ 1F Tellers'   Because the sites are located in the basement and 1F, it is inevitable to disperse the number of defenders. In other words, if the attackers attack either side, the defenders might have a numerical disadvantage.   Even though there are two floors for the defenders to cover, they still only can reinforce a total of 10 walls, so there will be many walls that have not been reinforced. Due to the following reason, Thermite will also have not many places to use the Exothermic Charge, but if you do, you can use it on the hatch or the reinforced walls in the basement. ▲ You might want to enter the 1F Visa Entrance and approach the Tellers... ▲ But if the defender is aiming through the 2F Administration Office hatch, you will be exposed in danger. 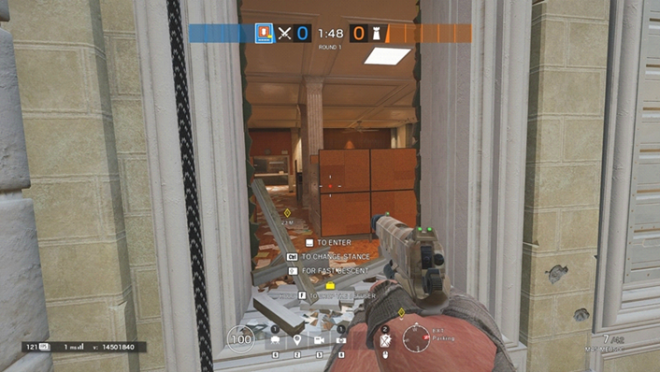 ▲ Therefore, it is highly necessary to clear the roamer hiding on the 2F Administration Office. 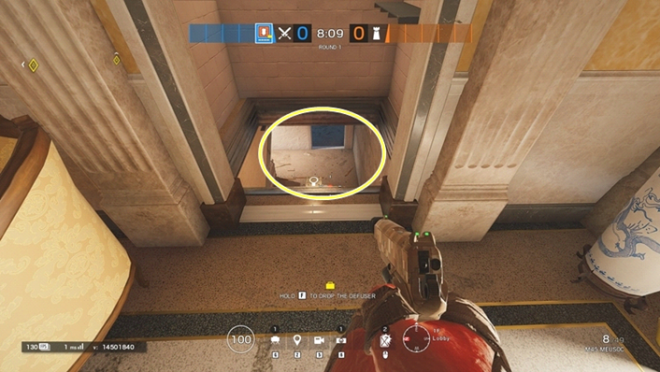 ▲ The 1F has multiple hatches leading to the basement Archives. ▲ If the hatch is reinforced, you can use the Exothermic Charge to destroy it and attempt dropping to the Archives.       ▣ In case, the site is located at 'B Cafeteria ~ B Garage'   There are three exterior walls in the Garage, so it would be better to breach these places first. Depending on the matter of piercing this wall will determine who’s winning, so if the player chooses Thermite, this would be the purpose. Therefore, the defenders will also try Bandit Trick on this wall.   Unlike Hibana and Ace, Thermite can remove the Exothermic Charge immediately, so it can somewhat react to the enemy’s Bandit Trick. The Garage has three walls and a drone hole right next to it, so as soon as you hear the Bandit Trick sound, you can remove it and attach it on another wall. It is also possible for team members to catch the defender from the Exit Stairs or the 1F Press Room, so if you cooperate with the team members, it will be fine. 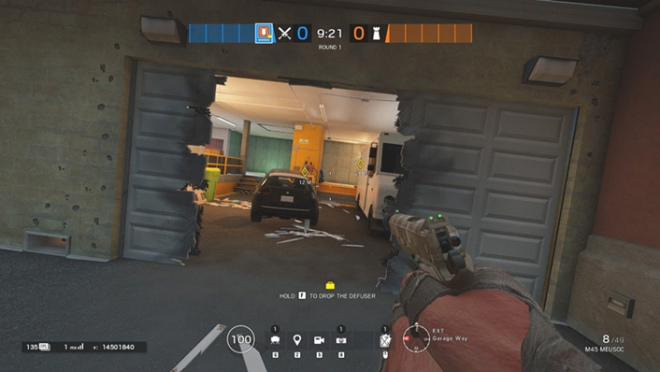 ▲ The most key point when targeting Underground Garage. The availability of breaching the Garage exterior reinforced wall would be the key factor to achieve the victory. ▲ If the defending operator Bandit or Kaid tries the Bandit Trick, the team can check from the Exit Stairs, or ▲ The 1F Press Room with the vertical play. 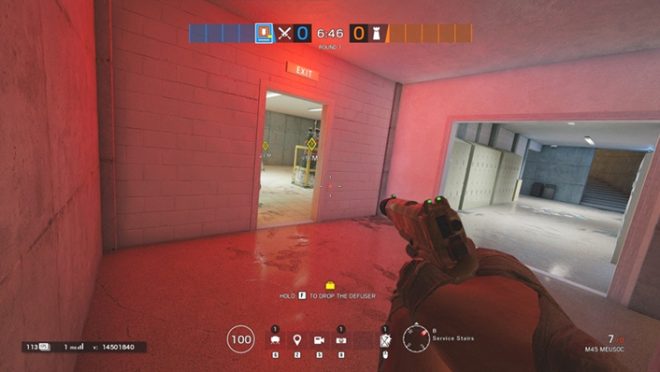 ▲ While the team confronting, the rest of the attackers should detour and launch an attack from the Cafeteria.