Guide to playing ‘Rook’ in ‘Border’

Border is a small-sized battlefield consisting of 1F and 2F. Each floor is quite narrow and has multiple routes to enter, so there are not many rooms for the defenders to settle down. Due to the following reasons, the attackers usually check inside the building through the windows or doors, but on the contrary, the defenders also often run-out to catch the enemies checking outside the building.   Uniquely, the Objective Locations are generated one on the 2F and three on the 1F. Almost every floor on the 2F is made of destructible material, and many hatches are leading to the main Bombsites, so if the Bombsite is placed on the first floor, you will often see the attackers trying to play vertical on the 2F. Likewise, the defenders should also distribute defending units on the 2F and use the map widely to defend. 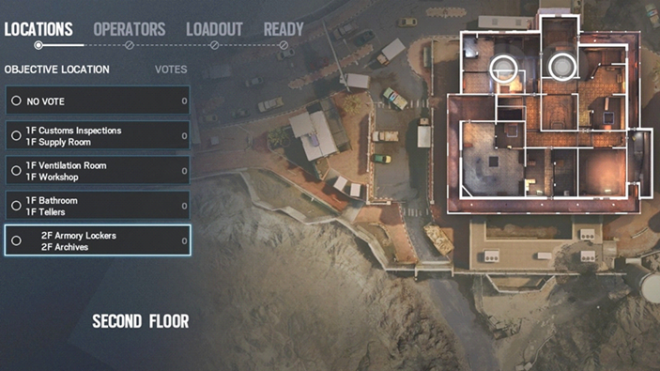 ▲ Border’s 2F is safe from the enemy’s vertical play, so this objective location is relatively advantageous compared to the other sites.     Rook is an operator who can distribute the Armor Pack, which increases the team's defense. Because Rook a supportive dedicated equipment, players usually think of him as a Buffer or Supporter, but Rook’s actual ability is to use an ACOG sighting, even though he is the defender. Therefore, it is possible to use like a sniper with the 2.5 magnification ACOG sight.   Because of the ACOG sight, Rook's primary Weapon selection is usually chosen between SMG MP5 and P90. While MP5s are stable and easy, the P90s have a faster Fire Rate with 50 Capacity, but it has low damage with quite a bit of recoil. I don't think either side is particularly superior, so choose depending on your taste. 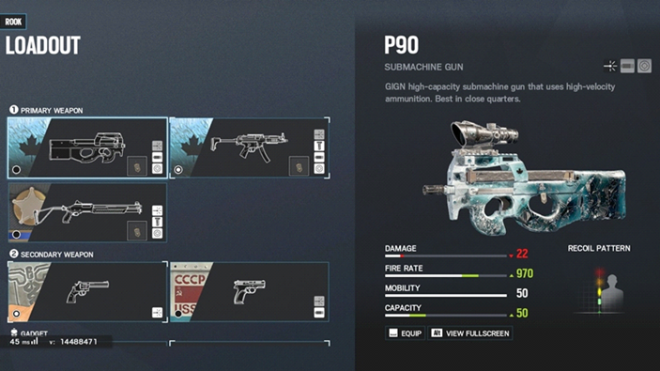 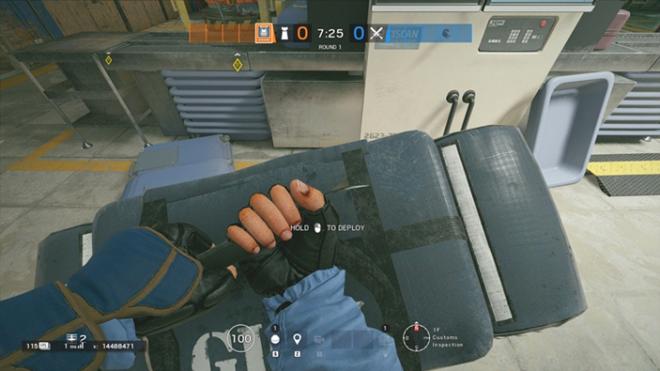 ▲ As soon as the preparation phase starts, set the Armor Pack on the floor for the defending roamers.       ▣ In case, the site is located at '1F Customs Inspections ~ 1F Supply Room'   The most important action to do in this site is blocking the reinforced wall on the Detention side, which is in contact with both Bombsites. If the attackers pierce this wall, they can reach the Supply Room and Customs Inspections directly. Therefore, the defenders usually operate Bandit or Kaid to install electrical equipment behind the reinforced wall. Of course, the attackers might also use Thatcher or Kali along with the hard-breacher, so usually, Bandit or Kaid attempts Bandit Tricking behind this reinforced wall.   Although there are quite a few angles for Rook to hold, it is not good to just hold one site because the attackers can approach from different directions. It is important to communicate with the team members, keep track of the enemy location, and change the angle accordingly. It would not be bad to run-out towards the Exit Hallway or Ventilation Room and surprise the attackers working on the Detention reinforced Wall breaching. 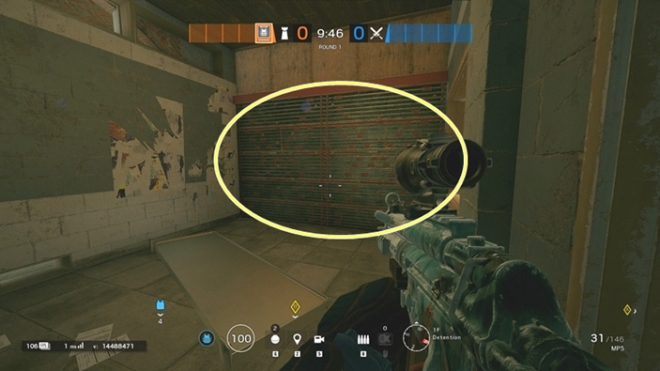 ▲ Detention side reinforced wall, where the defenders must protect till the end. Bandit or Kaid should handle this wall. 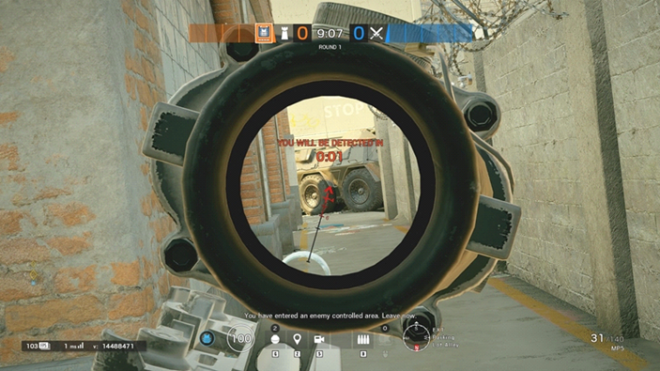 ▲ You may also attempt run-out through the Exit Hallway barricade. 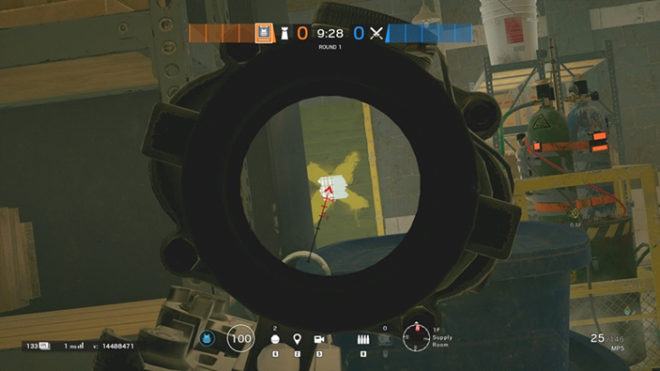 ▲ If you are playing Rook, try to utilize the functionality of ACOG sight as much as possible. 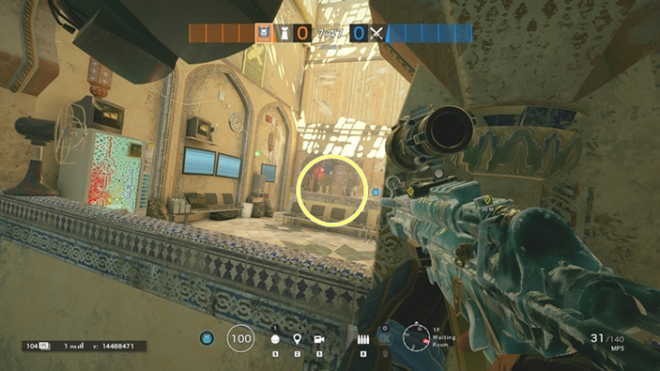 ▲ Use the Impact Grenade in suitable places to create new angles. 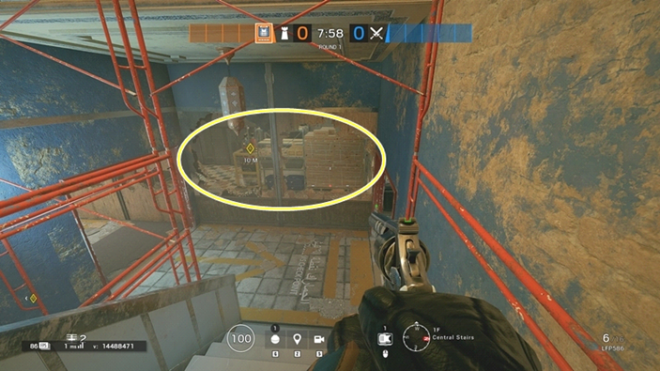 ▲ If you use the impact grenade at this wall, you can check the enemy entering through the Supply Bombsite window. 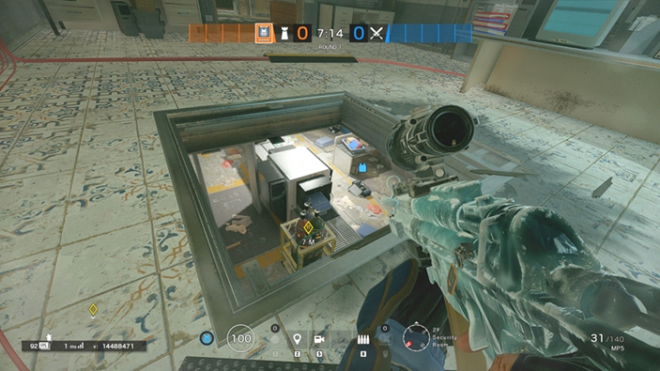 ▲ The 2F Security Room has two hatches leading to the Customs Inspection, so make sure you reinforce them before the action phase starts.       ▣ In case, the site is located at '1F Ventilation Room ~ 1F Workshop'   This site has no such place as the Detention reinforced wall described above, but the Ventilation Room has a window that leads to the outside, allowing the attackers to look inside the Bombsite. Therefore, it is nearly impossible for the defenders to hide in the Ventilation Room. Instead, the defenders create a rotation and defend at the Server Room. Since Rook can choose Impact Grenade, put down the Armor Pack first and work on creating Rotation with the Impact Grenade as soon as it starts.   This site not only has hatches on the 2F Armory and Archives but also is vulnerable to Vertical Play from the top, due to the destructible material floor. For this reason, the defenders reinforce the hatches and dispatch defending units on the 2F to cut the enemy entered 2F. In this case, Rook can act as a sub-anchor at this position, keeping an eye on the angle to the enemy approaching. 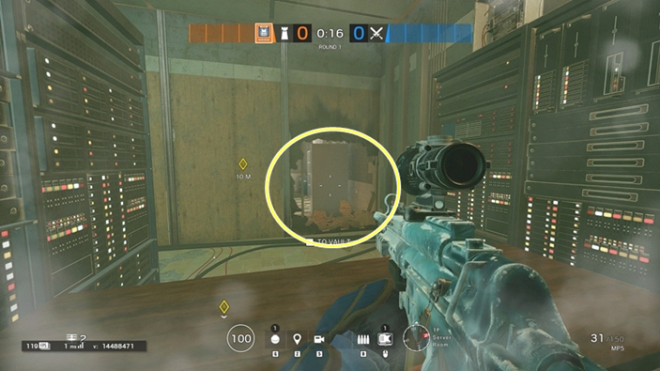 ▲ I recommend making a rotation between the Server Room and the Ventilation Room to move freely. 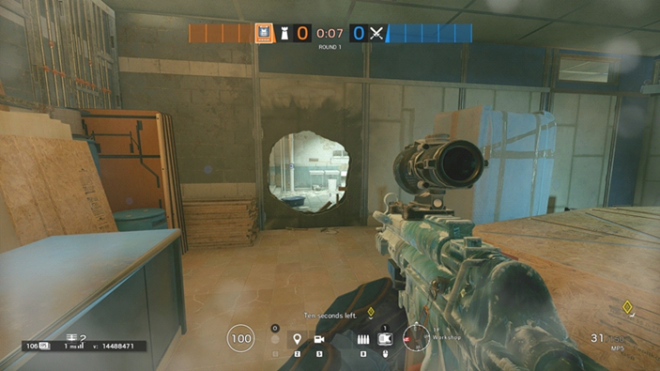 ▲ Likewise, make a rotation between the Workshop and the Bathroom. 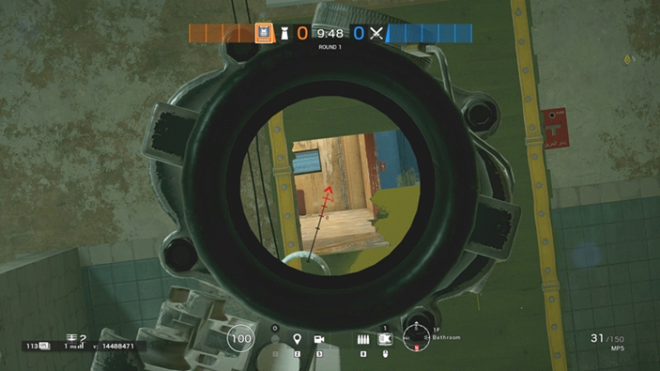 ▲ You can seize an angle showing the Main Lobby and Waiting Room from the Bathroom. 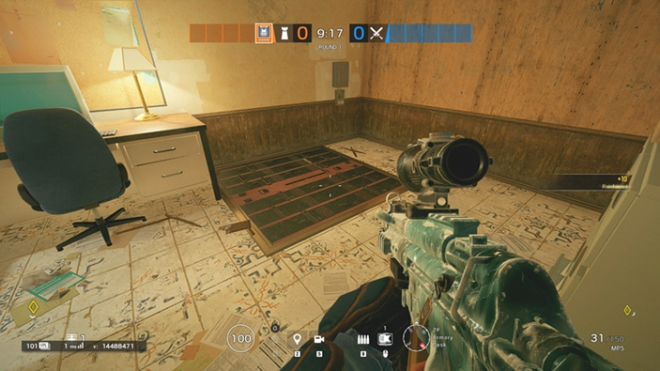 ▲ 2F has a hatch, enabling the attackers to look down the Server Room and Workshop, so reinforce it. 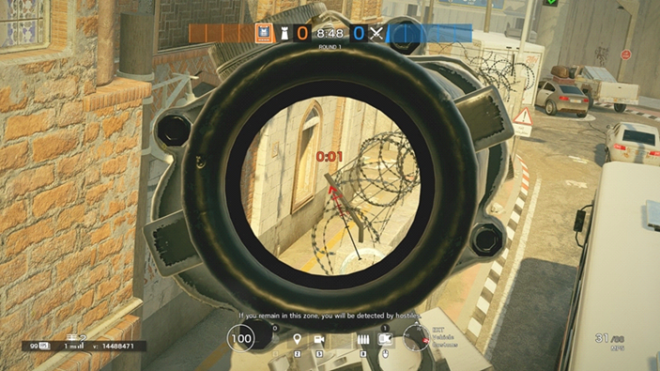 ▲ If you attempt run-out through the 2F Archives window, you can catch the enemy checking the Ventilation Room.       ▣ In case, the site is located at '1F Bathroom ~ 1F Tellers'   There is an external reinforced wall in Tellers, and there is even a window right next to it, so the situation is completely different from the Detention reinforced wall described above. Even if Shock Wire or Electroclaw is installed behind the reinforced wall, it can be easily removed through the window, making it impossible to try Bandit Trick. Therefore, it would be comfortable to think that this side of the reinforced wall will inevitably be pierced.   Instead, players defend the enemies from the 1F Bathroom side or looking down the hatch of the 2F Office. In particular, it is quite effective to defend on the 2F, because if the attackers don’t check the upper condition, they will be easily get caught by the defenders on the 2F. Because of this, the attackers also want to clear the 2F first. Let's work with the team members to stay as long as possible on the 2F and delay the attackers. 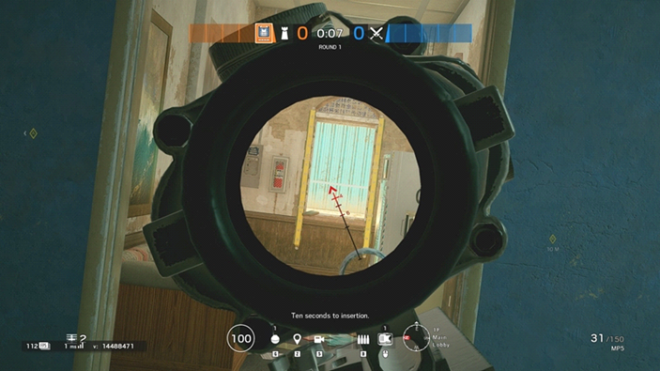 ▲ Because Tellers has a window right next to the reinforced wall, it is nearly impossible to protect the wall until the end. 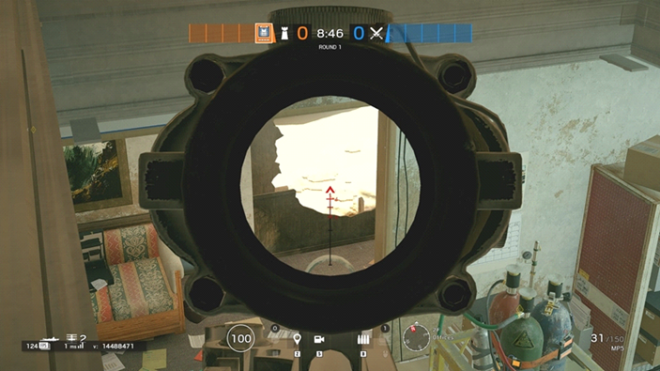 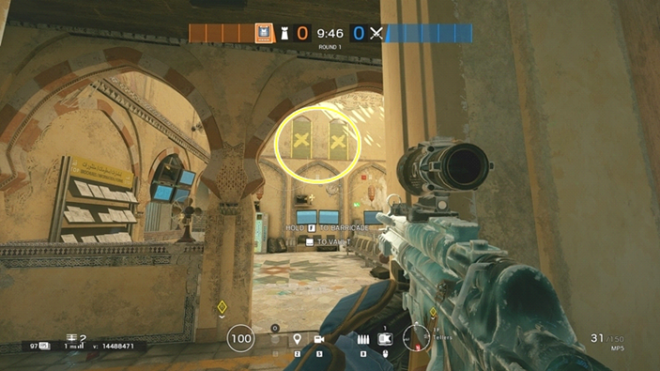 ▲ The attackers can check through the 2F Balcony window, so be cautious. 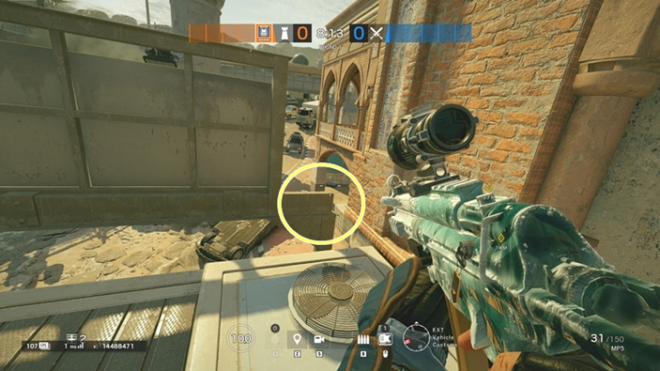 ▲ If you run-out through the Archives 2F window, you can find the enemy confronting on the circled place.       ▣ In case the site is located at '2F Armory Lockers ~ 2F Archives'   This site is the only place where the Objective Location is created on the 2F, so there is no risk of having a vertical play upstairs. For this reason, this place is the most frequently appeared among the objective locations that the defense team can choose from in the Borders.   If the external reinforced wall on the side of the Armory Lockers is pierced, the Armory will be clearly exposed to the enemies, so the offensive team will attempt breaching this wall. Of course, it would be nice if Bandit or Kaid handles, but one of the defenders could also be located at the opposite side of the Security Room and check the offensive team hard breacher approaching the reinforced wall. To secure the safety, the offensive team might approach the 2F Security Room and Break Room first, so be careful.   In some cases, the offensive team enters the opposite side of the North Balcony or East Balcony and targeting the Office or Archives. At this moment, if Rook is waiting in a position where he can check both the office or Balcony angles, the offensive team will not be able to access easily. 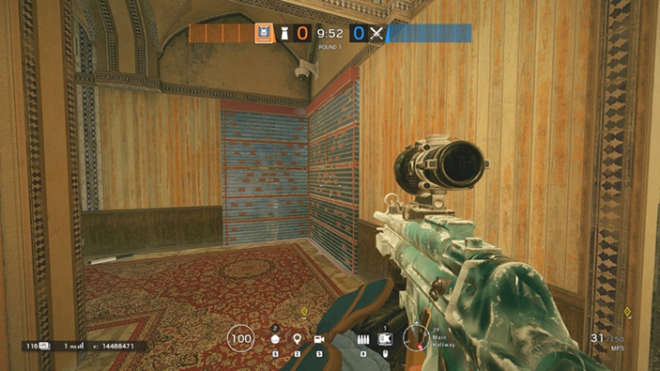 ▲ The wall that you should reinforce. If the attackers captured the Security Room, they can make a hole and create an angle forwards the Hallway. 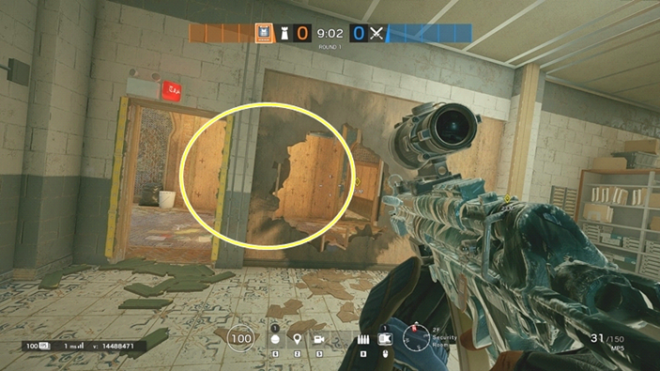 ▲ If the attackers approach the Armory to attempt breaching, you can check from the Security Room. 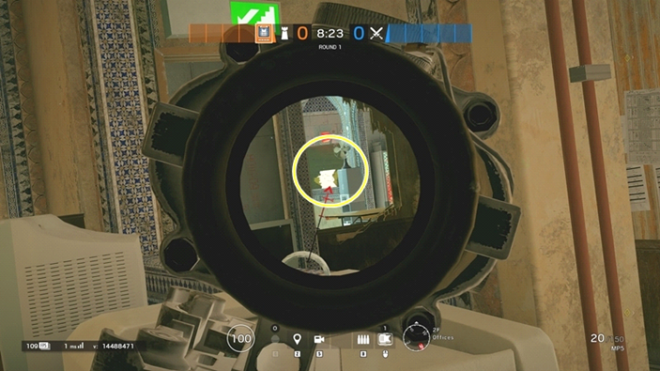 ▲ Create an angle with the Impact Grenade and check the enemy approaching the Security Room. 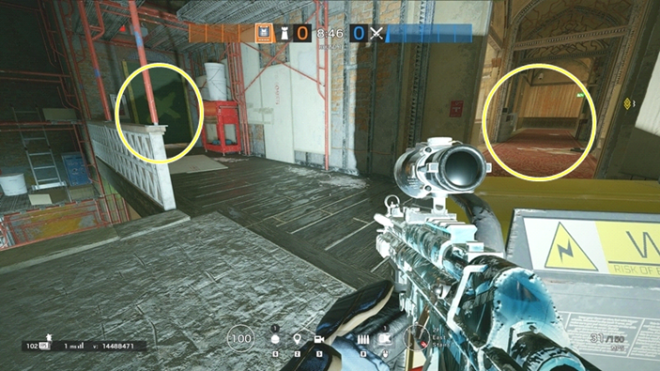 ▲ If you wait on the East Stairs, you can check both the Security Room and Balcony at the same time. 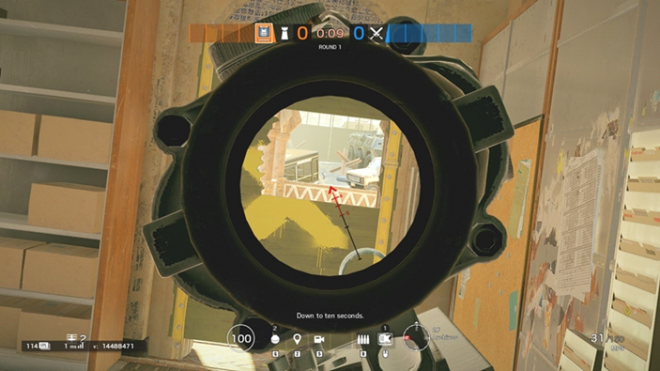 ▲ If you try to catch the enemy approaching the Archives from the North Balcony, ACOG sight will be super helpful.