Guide to playing ‘Mute’ in ‘Consulate’

Consulate is a slightly large-sized battlefield consisting of basement, 1F, and 2F. The objective locations are generated one on the 2F, one on the 1F, one that is combining 1F and basement, and the last one in the basement. However, the defenders do not favor the double-decker bombsite due to its wider defense range.   As there are many windows on the exterior walls, the defenders often attempt spawn-kill. However, the attackers also use these windows to check inside or to enter, so the defenders also have to keep their sensors sensitive.   Each floor is connected by three stairs: Exit Stairs on the west of the building, Main Stairs on the center, and Service Stairs on the east. Due to the multiple stairs on each side, if the defending roamer utilizes these stairs well, it will make it easier to catch the back of the attackers. While the anchors around the Bombsite confront the attackers, the defending roamers will detour and catch the attackers from behind. 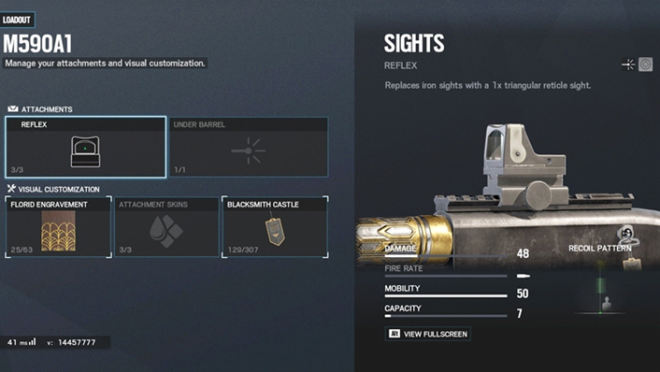 ▲ If the remodeling work is required around the Bombsite, it is okay to pick the M590A1 shotgun as a Primary Weapon.       ▣ In case, the site is located at '2F Consul Office ~ 2F Meeting Room'   2F is the uppermost floor of the building, so the defenders don’t need to worry about the attacker’s vertical play. Also, it is not difficult for the defense team to detect the enemy wherever they enter. The offensive team will try to attack inside through the windows or infiltrate into the Exit Stairs or the Administrations, but if the defender checks the enemy entering, it would not be easy for the attackers to enter.   Just by installing the Signal Disruptor around the three stairs during the Preparation Phase, the enemy drone reconnaissance can be shut down. This would make it more difficult for the offensive team to enter because the attackers would not know where the defenders are located. Therefore, Mute and other anchors should drag time as much as possible rather than engaging with the offensive team. Wait for the roamer and catch the offensive team simultaneously. 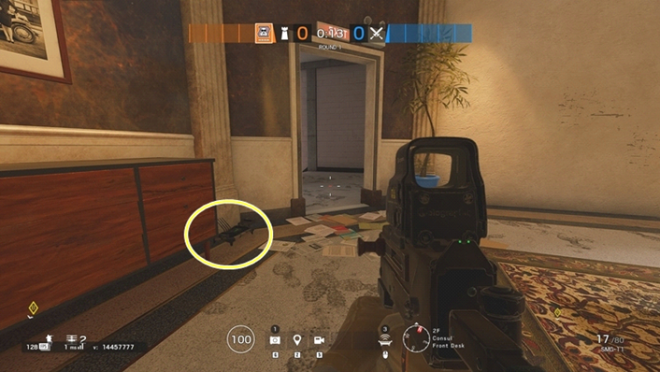 ▲ Install the Signal Disruptor one on the Exit Stairs, 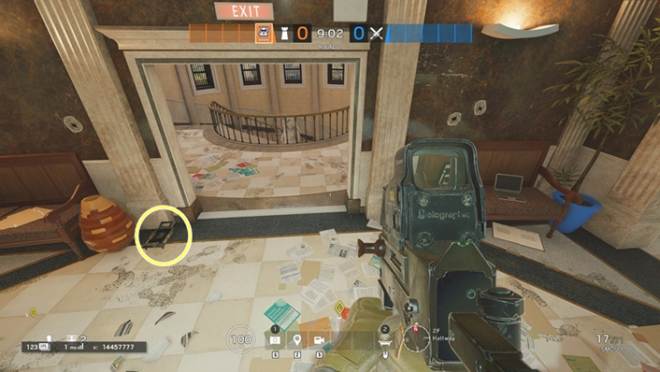 ▲ Another one on the Main Stairs... 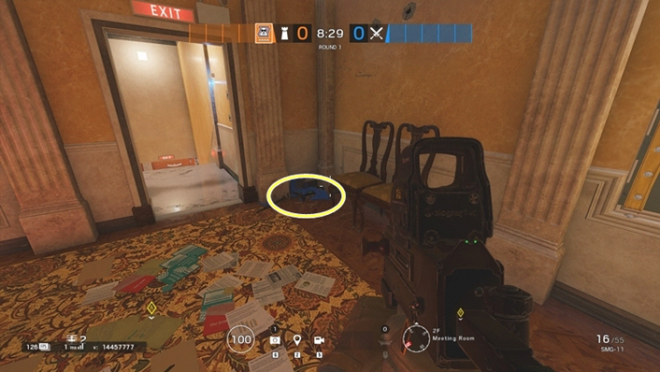 ▲ And another one on the Service Stairs. If you successfully install the Signal Disruptors on those three points, the enemy drones will not able to move inside the bombsite. 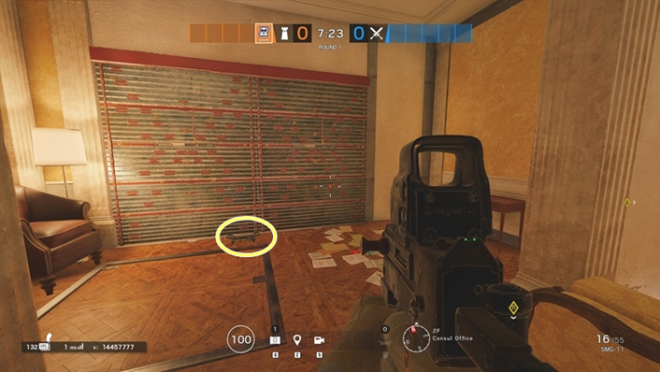 ▲ On the Waiting Room, where the middle of both Bombsites. If you make the rotation on the circled wall, it would be helpful for the team. 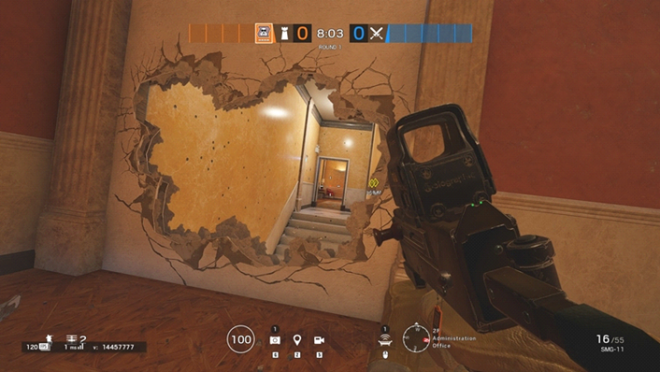 ▲ If you open this wall while defending the Administration Office, you can cover both the Service Stairs and the Meeting Room at the same time.       ▣ In case, the site is located at '1F Lobby ~ 1F Press Room'   If the enemy breaks the main entrance barricade, the Lobby will be exposed completely, making the defenders have no place to hide. Press Room is also the same, so there is nowhere to hide if the enemy checks from the window on the first floor or approach from the Exit Stairs. Due to the following reasons, anchor operators such as Echo and Maestro usually stick inside the Public Bathroom and the rest spreads around and works as a roamer.   There is no suitable place to install the Signal Disruptor on the Lobby because of the heavy exposure. If you really want to, you should install it in blind spots or focus the Signal Disruptor on the Public Bathroom or Press Room side. In particular, the attackers occasionally attempt breaching the Public Bathroom on the West Corridor, so installing the Signal Disruptor on this wall will help ensure the safety of the anchor. ▲ The Main Lobby barricade usually gets destroyed immediately as soon as the action phase starts. So, defending this barricade is quite meaningless. ▲ Pierce the 2F Meeting Room floor and checking the entrance might be more effective. 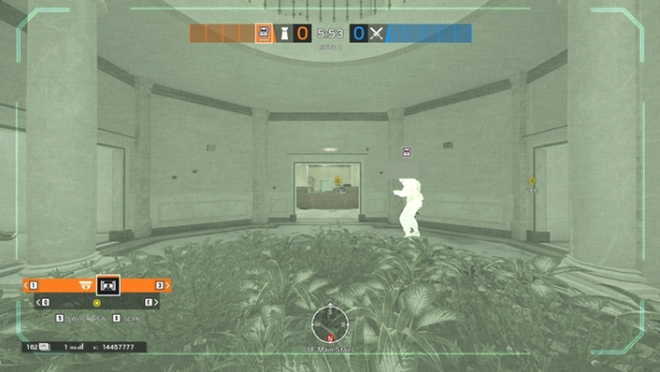 ▲ Sometimes the attackers throw the Smoke Grenade and install the Defuser, so make sure you install the Bulletproof Camera or Maestro’s Evil Eye in advance to prevent this happening. ▲ It is also good to install the Signal Disruptor on the Public Bathroom reinforced wall. 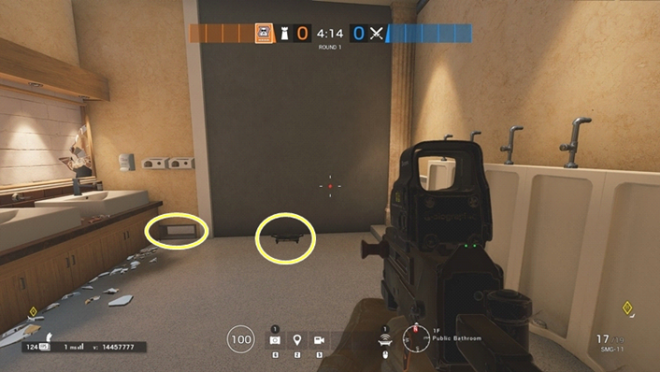 ▲ Likewise, if you reinforce this wall, you may set the Signal Disruptor here as well. 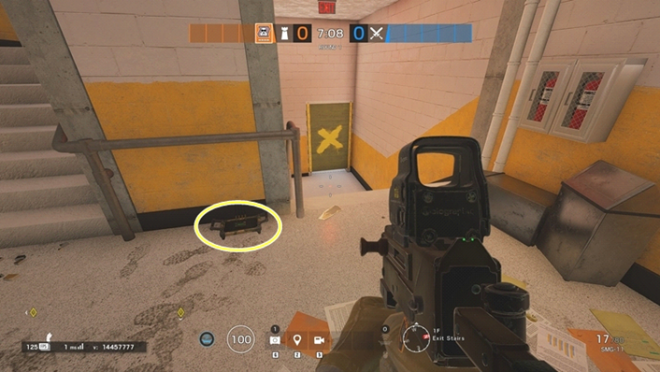 ▲ If you install the Signal Disruptor in a circled point, it may be helpful to block the enemy approaching from the Exit Stairs.       ▣ In case, the site is located at 'B Archives ~ 1F Tellers'   Since the site is generated one on the underground and the other on the 1F, the defensive team must cover both floors. Inevitably, the number of defense teams should be dispersed, so a number of the disadvantageous situation will happen. For this reason, the defenders rarely choose this place.   It may also be better to focus the Signal Disruptor on only one side of the Bombsite because it is too difficult to cover all. If you are in charge of defending the 1F, set up the Signal Disruptor around the Visa Office and East Corridor. However, if you have to defend the basement, install it on the Garage or Archive Corridor.   When blocking the 1F Tellers, it will be helpful to hold the angle through the hatch on the 2F Administration Office. However, sometimes the attackers prioritize clearing the 2F first, so be careful when defending on the 2F. 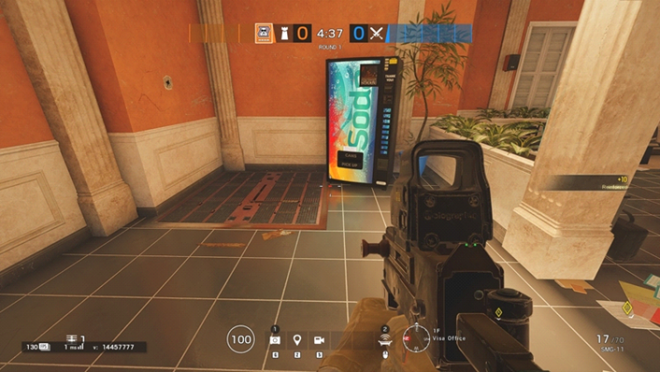 ▲ Make sure you reinforce the Visa Office hatch. 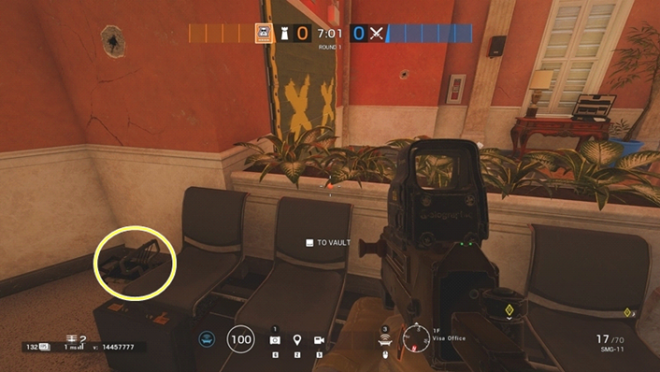 ▲ Because the enemy drone often passes the Visa Entrance, it would be nice to install the Signal Disruptor here to block it. 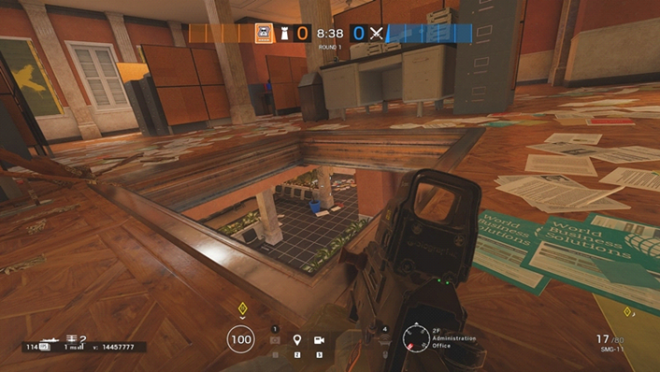 ▲ When you’re defending the Visa Office, open the 2F Administration Office hatch and look down to check the enemy approaching. ▲ Through a gap on the table next to hatch, you also can check the Garden side window. 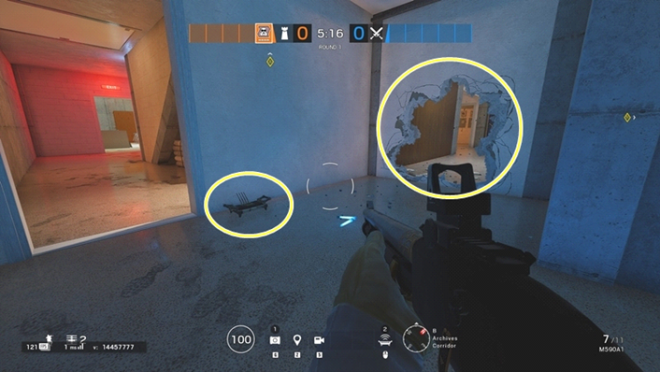 ▲ When you are defending the basement, install the Signal Disruptor on the circled place to block the enemy drone approaching from the Cafeteria. 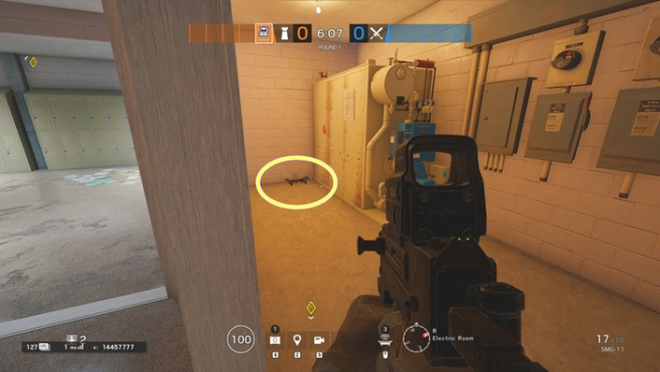 ▲ If you install the Signal Disruptor on the Electric Room, you can block the enemy drone approaching from the Main Stairs.       ▣ In case, the site is located at 'B Cafeteria ~ B Garage'   Garage has three walls connected to the outside. If one of these walls is destroyed, the attackers become easier to enter and install the defuser, so the defenders must reinforce these walls and set up Bandit’s Shock Wire or Kaid’s Electroclaw to save it. If the team doesn't have a Bandit or Kaid, Mute should install the Signal Disruptor instead. In this case, two Signal Disruptors will be required because there are three walls.   While both team units are confronting each other in Garage, the rest of the offensive team will either bypass the other side of the Cafeteria or enter the 1F Meeting Room to try Vertical. Therefore, the defensive team will also have to be prepared for this route. If things get worse and hard to keep the Garage, give up the reinforced wall and fall back to the Cafeteria or the Security Room. ▲ If Bandit or Kaid does not exist, you should install the Signal Disruptor on the Garage exterior reinforced wall. 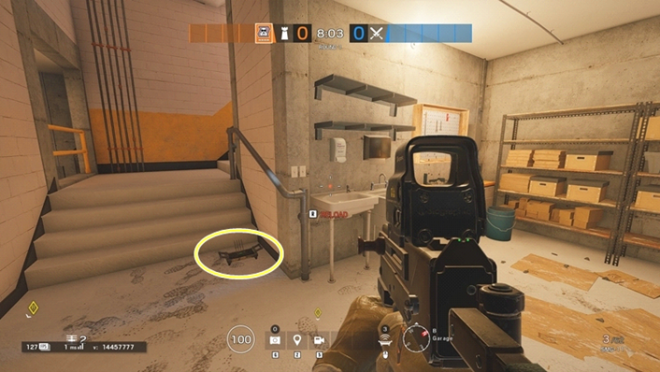 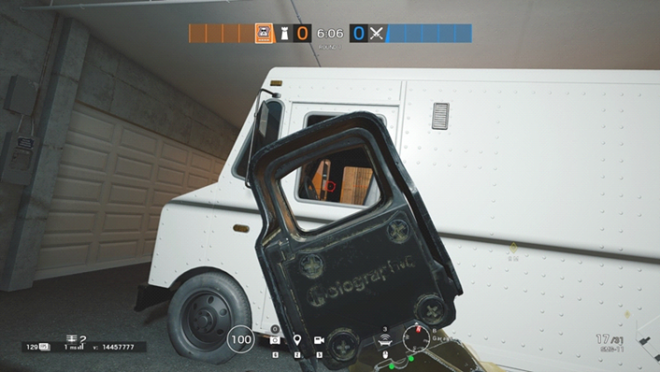 ▲ Through a Van window, parked on the Garage, you can check the enemy approaching the Exit Stairs. ▲ I would recommend making the rotation connecting the Cafeteria and Garage. ▲ While confronting in the Garage, the other attackers might approach from the Cafeteria, so be cautious. 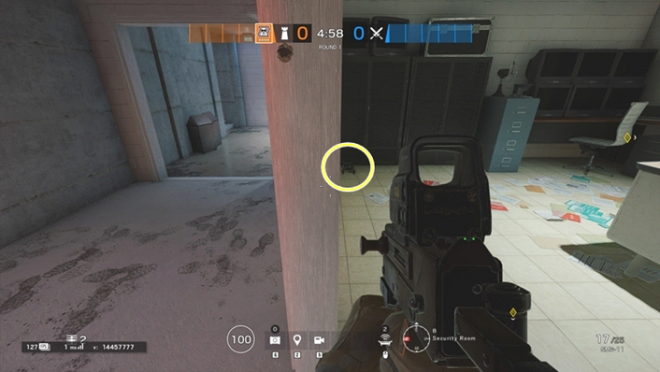 ▲ The Signal Disruptor installation point, which blocking the enemy drone approaching to the Main Stairs.