Guide for playing 'Doc' on 'Border'. 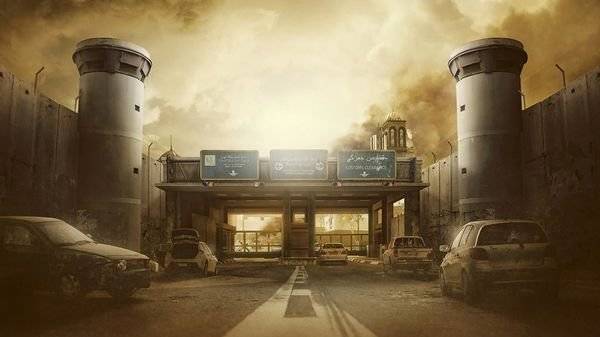 [DISCLAIMER: This guide is intended to be as bare bones as possible in order to give general advice to any new Rainbow Six: Siege players. In addition to this article being opinionated, I would like to also state that zero-sum strats in this game do not exist and the tell of a good Siege player is their decision making and adaptation to the changing battlefield.]   Border is a double-level map (consisting of two floors) found both in ranked play as well as professional. The current architecture of the map is generally balanced though a slight edge may be given to attackers as the map is highly destructible.   Doc is a one speed, three armour defending operator. Doc’s ability is the ‘Stim Pistol’; a projectile gadget which shoots medical stims, capable of healing teammates with low HP as well as reviving teammates who are in a DBNO state. Doc is most commonly used for the operators MP5 which can be customized to have an ACOG equipped as an optic. Due to the MP5’s low recoil, the ACOG can be highly useful if used to hold long angles on the bomb site. This makes Doc ideal as an anchor.   If you are to be in accordance with the current meta, Doc’s loadout should be as follows; -PRIMARY - MP5 (WITH ACOG) -SECONDARY - LFP586 (Revolver) -UTILITY - Can vary based upon the needs of the team. (Personally, I always bring Barbed wire.)     DEFENDING: [2F] ARMORY(A) - ARCHIVES(B) The primary route of attack on this bomb site will be by the attackers gaining control over CCTV and Break room located on the north side of the second floor. After establishing control over CCTV-Break room, attackers will then proceed to breach the reinforced wall of the outside balcony leading into the Armory(A) bomb site; attackers will then plant the defuser in or around the breach hole made by the hard breachers. Doc should be playing inside of the Fountain room - adjacent to the Archives(B) bomb site. From this position, you will have access to an incredibly powerful long angle which can allow you to prevent any attackers from vaulting the Archives(B) window all the way from the opposite end of Fountain. POSITIONING: [2F] ARMORY(A) - ARCHIVES(B) 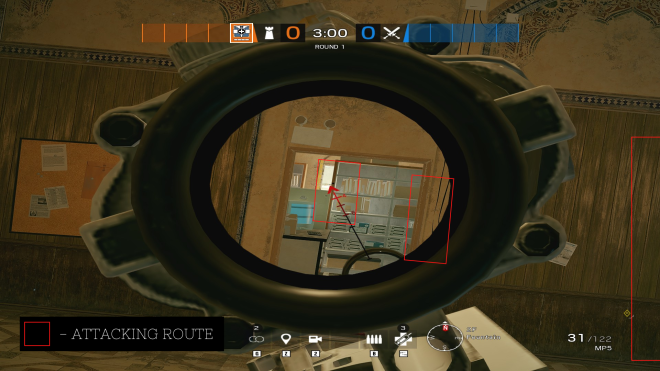 DEFENDING: [1F] BATHROOM(A) - TELLERS(B) The primary route of attack on this bomb site will be by the attacking team breaching the reinforced wall separating Tellers(B) from the outside - located on the north eastern wall of the first floor. Attackers will also typically need control of the second floor ‘Offices’ as it is very common for defenders to defend Bathroom(A)-Tellers(B) vertically from the second floor. Doc should be playing on the first floor, inside of the Bathroom(A). Bathroom(A) is connected to the rest of the building with a long hallway which leads to the primary first floor intersection (the open area of metal hallway, directly underneath the default camera.) This provides Doc with a good opportunity to use the operators low recoil and long range capabilities to the players advantage as the Bathroom(A) is a relatively safe location to play inside of and hold a long-angle looking down the adjacent long hall. POSITIONING: [1F] BATHROOM(A) - TELLERS(B) 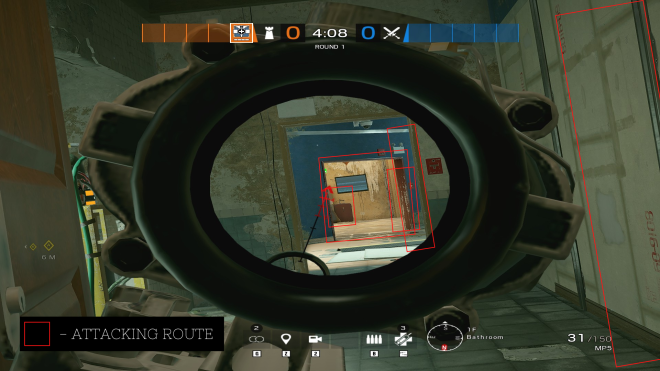 DEFENDING: [1F] SUPPLY(A) - CUSTOMS(B) The primary route of attack on this bomb site will be by the attacking team breaching the south-western reinforced wall leading from the outside into Detention. Attackers will also commonly attempt to gain control over the second floor CCTV and Break Room as these positions will provide great vertical control over the two first floor bomb sites. Doc should be playing by the connector window, located in between Detention and Supply(A). This will be a great spot for you to get the most out of Doc’s long-range capabilities by either holding a long-angle from the connector to the Supply(A) window, or by holding an aggressive long-angle through the detention wall after it has been breached by attackers. Use caution when playing in this position as it is very common for attackers to use frag grenades to eliminate defenders playing in this position. POSITIONING: [1F] SUPPLY(A) - CUSTOMS(B) 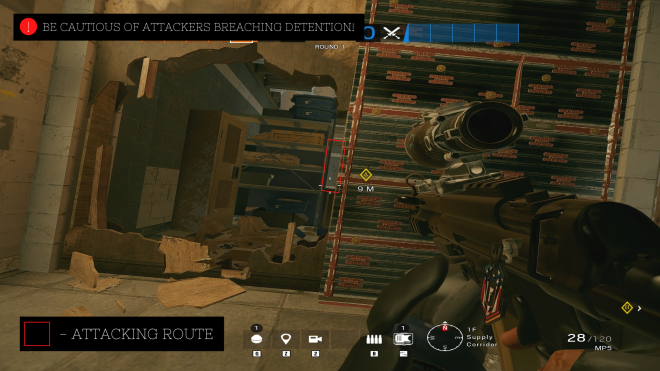 DEFENDING: [1F] WORKSHOP(A) - VENT(B) The primary route of attack on this bomb site will be by the attackers establishing full control of the second floor Armory-Archives rooms located directly above the Workshop(A)-Vent(B) bomb sites. After gaining control of the second floor, attackers will breach the reinforced hatches located inside of Armory Desk and Archives in addition to destroying the flooring of the second floor as this will allow attackers full vertical control of the two ground floor bomb sites. Doc can be played in a variety of positions on this bomb site. I believe the most influential way to play the operator would be similar to the way in which I had previously explained how to play Doc on 2F Armory-Archives. Due to attackers commonly dedicating a large amount of resources to the second floor, Doc will be well positioned inside of Fountain to help contest the inevitable push from attackers entering the building through the second floor Archives Window. POSITIONING: [1F] WORKSHOP(A) - VENT(B) 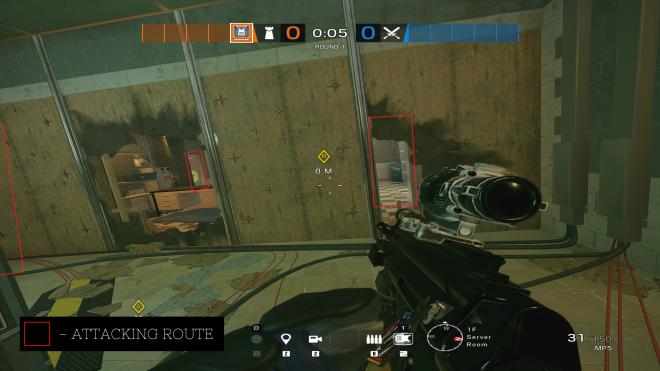