On June 16th, the House, the oldest battlefield in SIEGE, was reworked with the Operation Steel Wave update. Although the size of the building got wider than before, it is still smaller than other battlefields. After the rework, the House added many windows, doors, and walls allowing attackers to check inside the bombsite from the outdoor. Therefore, I am estimating defending the bombsite will not be easy.   I can feel the nostalgia of the House before the rework, and in fact, about half of the structures stayed the same, so the users who have played the House battlefield before will not get lost. This time, I will take a look at the features of the newly updated House, focusing on parts different from before Rework, and find out how to launch an attack. 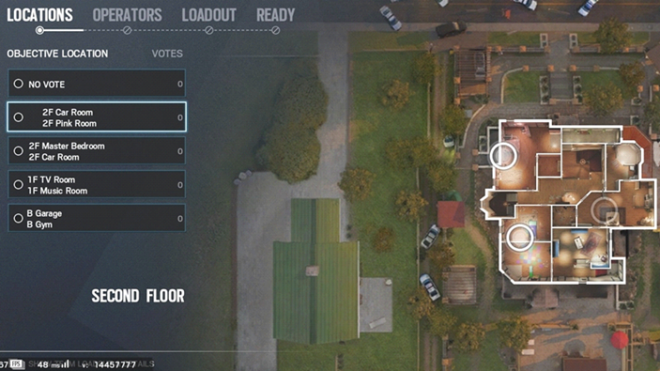 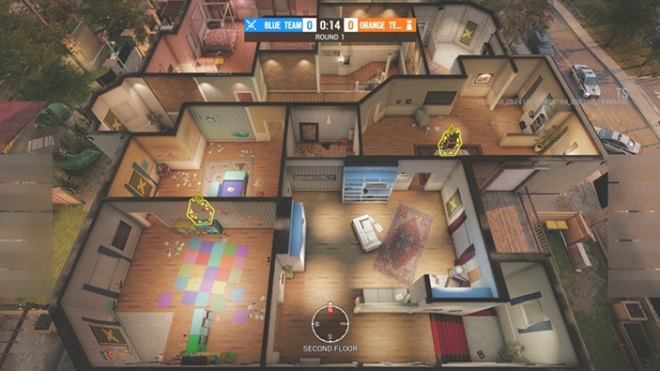 The 2F now has two objective locations and the Bombsite, ‘Car Room’, is overlapping. Either site, there is quite a distance between A Bomb and B Bomb, and because the size of the 2F is not so large, the defenders have to block the entire 2F.   On the 2F of the building, there are many windows for the offensive team to check from outside or try to infiltrate. On top of that, there is even a Master Bedroom reinforced wall connected to the outside, so if the offensive team uses a hard breacher and pierces the wall, they can take a huge advantage. On the other hand, the defensive team has to install the defending gadgets around to delay the entry of the offensive team. 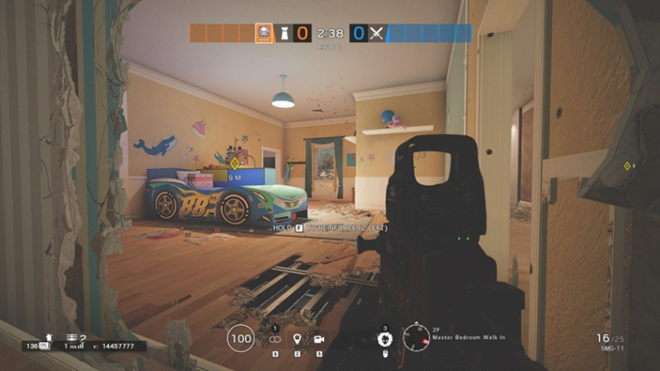 ▲ The Car Room, where the bombsite is overlapped, is the most important place on the 2F. 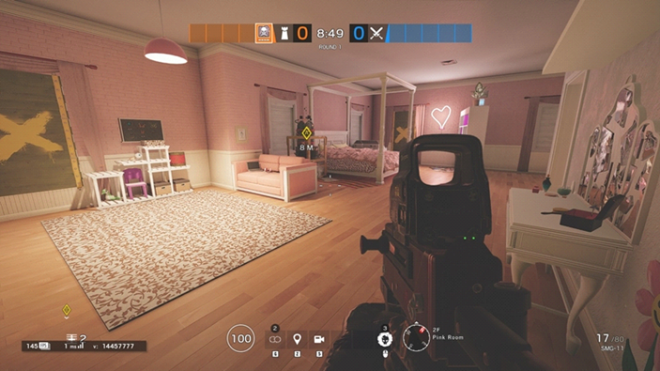 ▲ The original Workshop finally finished the construction and turned into the Pink Room. 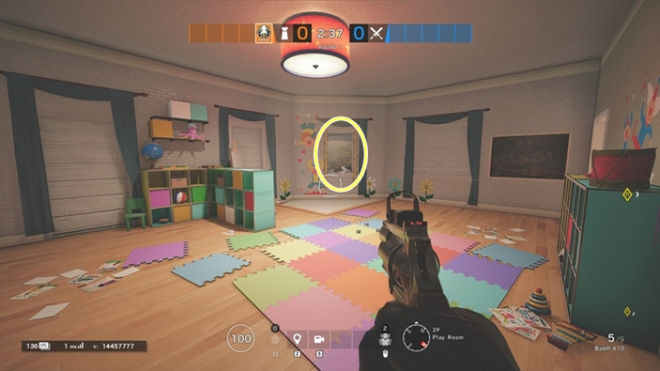 ▲ There is a Play Room connecting the Reading Room and Car Room. In this room, it has a window leading outside, so be cautious. 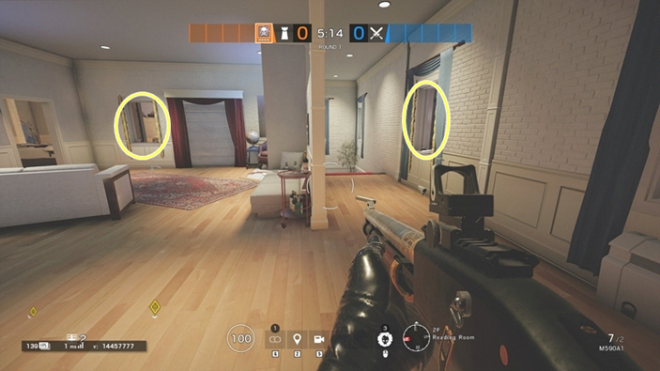 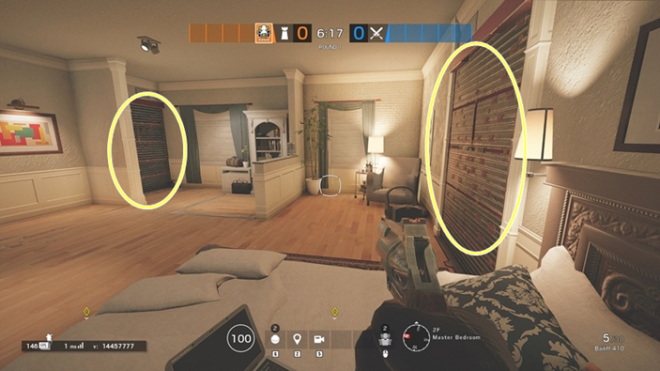 ▲ Master Bedroom has two walls leading outside, so the reinforcement is highly essential. 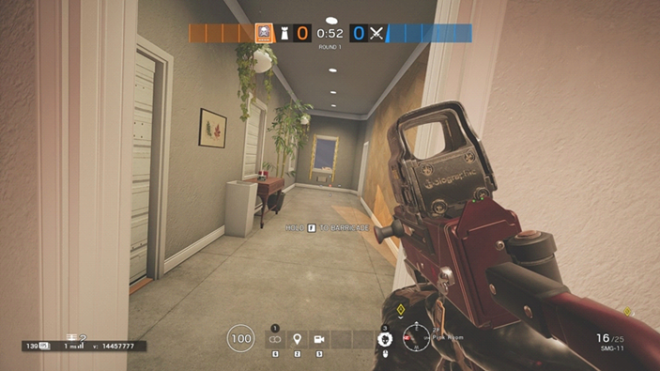 ▲ The hallway leading to the Pink Room. If Melusi’s Banshee is installed here, the attackers will have a hard time entering through this hallway.       ▣ 1F - TV Room ~ Music Room   On the 1F, both the TV Room and the Music Room, where Bombsite is located, are allowed to enter as soon as one barricade is broken from the outside. If the offensive team throws Stun Grenade or Smoke Grenade inside the Bombsite and tries to force into the field with Montagne and others, it will be quite difficult to stop.   The defensive team must hide in an invisible blind spot, and then block the enemies as soon as they enter. Of course, this would require setting up the Barbed Wire, Deployable Shield, or Melusi's Banshee Sonic Defense to slow down the offensive team's entry as much as possible. It would also be good to have Jager's ADS or Wamai's Mag-NET installed to prepare for the throwing objectives, like Stun Granade, Frag Granade, and Ying's Candela.   It would be nice if some of the attackers enter through the Office ~ Dining Room, which is located opposite, and then press the Bombsite simultaneously from both sides. If ACE throws S.E.L.M.A. Aqua Breacher into the Kitchen reinforced wall from the Dining Room, it could disturb the defending operators hiding inside the Bombsite. 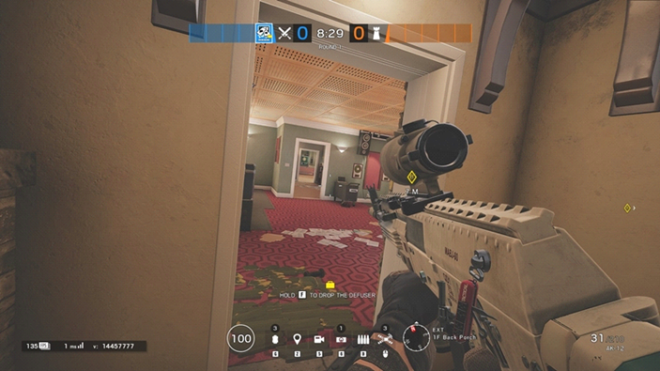 ▲ If you break one single barricade, you can see straight into the TV Room. 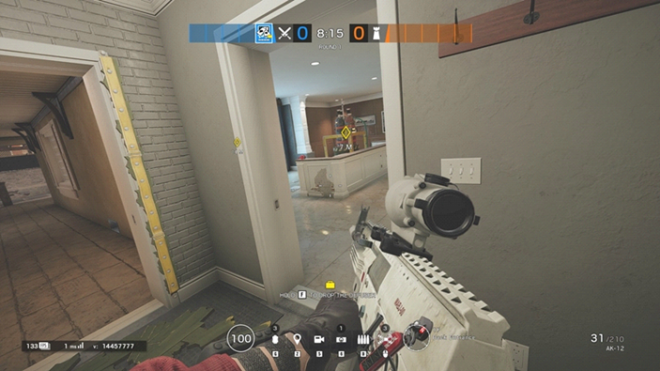 ▲ Similarly, if you break this barricade, you can enter into the Music Room directly. 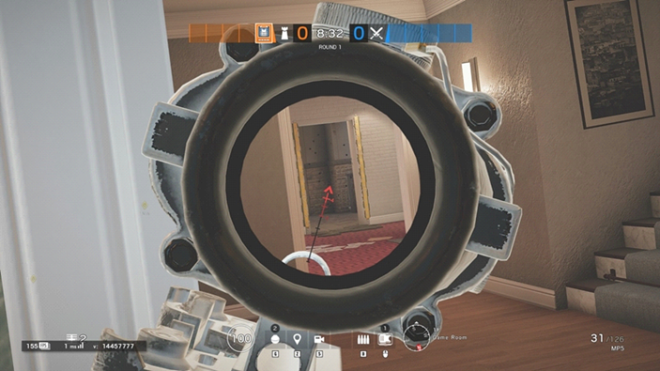 ▲ If there is an operator who can attach the ACOG sight, like Rook or Doc, it can check the Music Room entrance in the far distance. 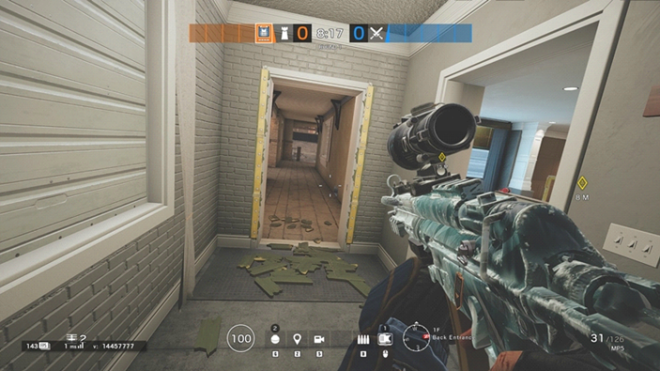 ▲ Or the defenders can attempt run-out through that barricade to surprise attack. 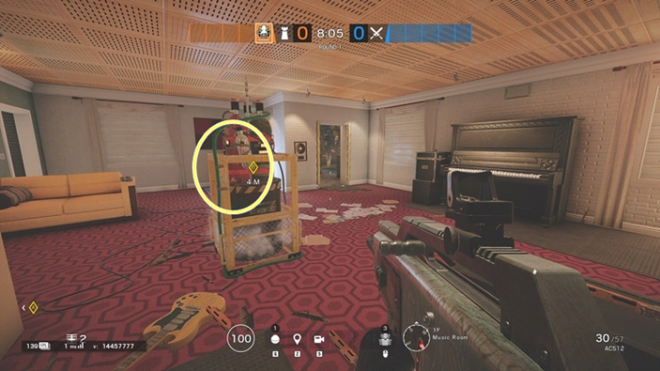 ▲ The defenders should install tons of defending gadgets on the entrance and hide on the circled spot. 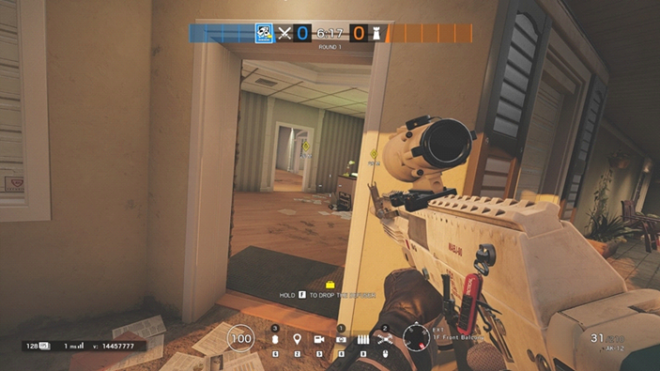 ▲ Some of the attackers can attempt infiltrating through the Front Balcony to approach to the Office. 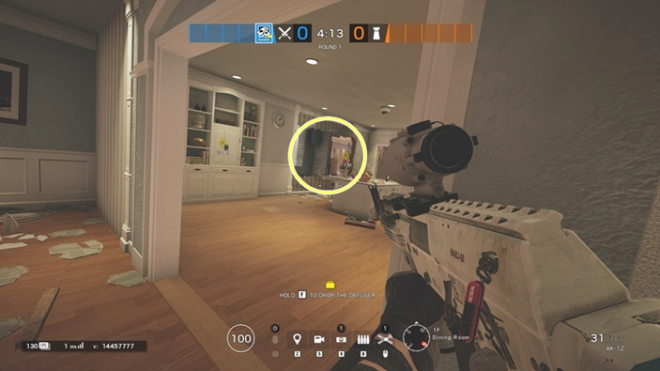 ▲ If you have reached Kitchen through the Dining Room, breach the Music Room wall to seize a new angle.       ▣ Basement - Garage ~ Gym   Unlike the 1F / 2F, the basement is where the defensive team has an advantage. Originally, before the Rework, the defensive team had a hard time blocking this site because it was too difficult to save the Garage reinforced wall. However, now the stress has released because one of the external reinforced walls becomes invalid on hard breaching. Even as the rest of the reinforced walls are checkable by drilling the floor at the 1F Office, it made it even harder for the attackers to enter.   Instead of disappearing one side of the outer wall, the door is added on the left side, making the attackers enable them to enter through this door. However, if the defense team has the Barbed Wire, Deployable Shield, or Melusi's Banshee Sonic Defense installed here, it won’t be easy to get through the Garage Entrance.   Similarly, the Depot, close to the Gym Bombsite, was originally possible to breach the wall connected to the Gym, but it is now been changed so that the offensive team cannot make a new angle. For this reason, the offensive team must enter only through the door that leads directly to the Gym, which will be very risky. 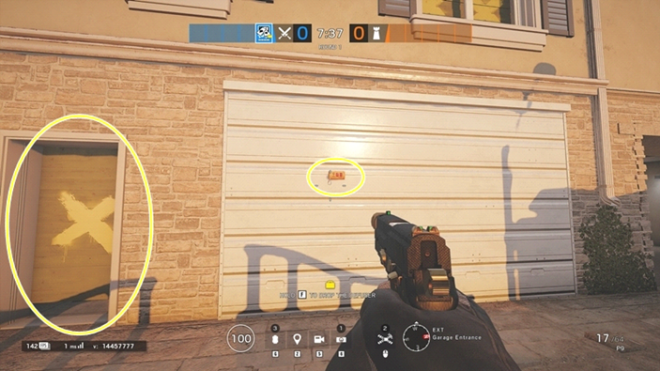 ▲ Instead of the three reinforced walls are not being breached, the Garage Entrance is added on the left. 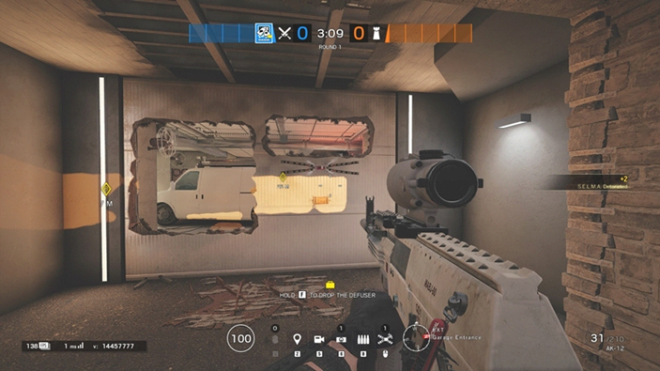 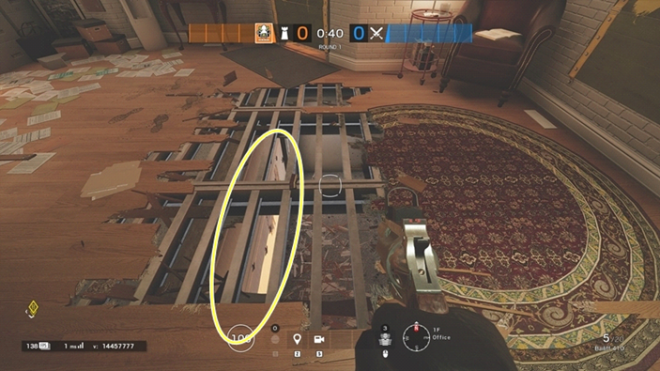 ▲ But the defenders can break the 1F Office floor and irritate hard breaching work. Therefore, securing safety is required. 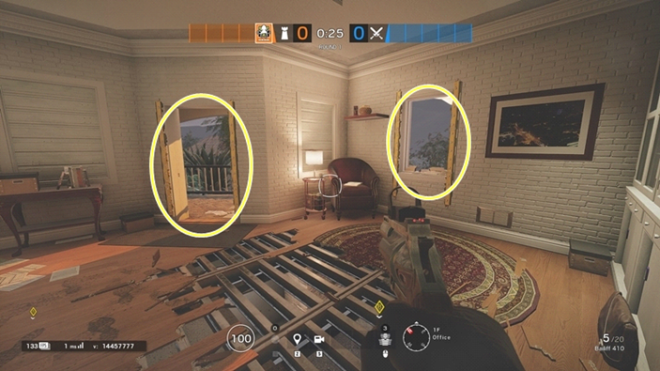 ▲ Of course, the attackers will rush into the Office to catch the defending roamer looking down the basement. 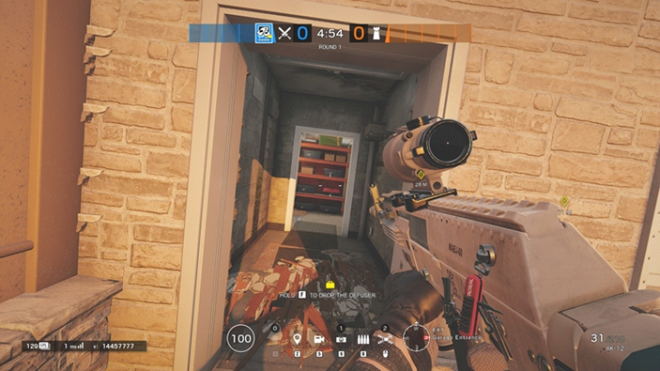 ▲ Newly added Garage Entrance. If the Barbed Wire or Melusi’s Banshee is installed, it would be hard to pass through. 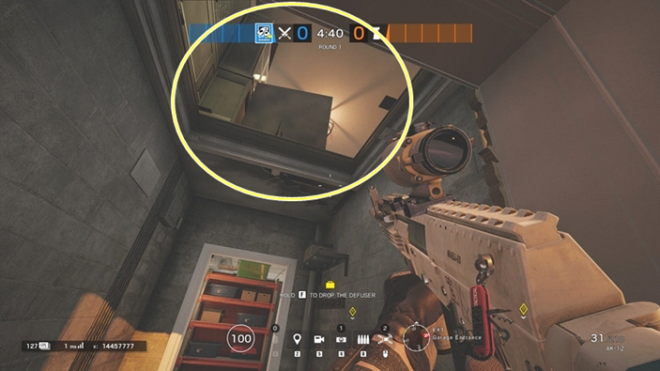 ▲ It also has a hatch on the top, making it vulnerable to the defending roamer waiting upstairs. 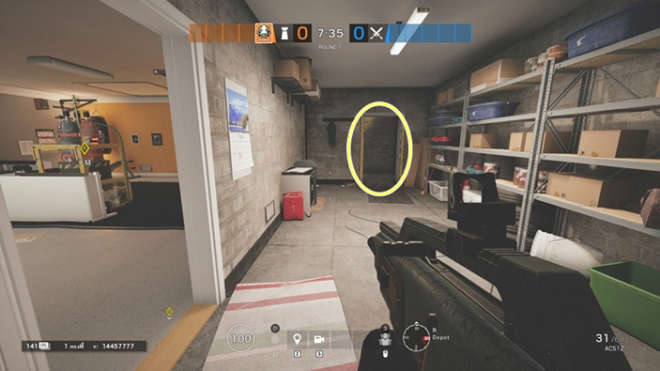 ▲ Even though the attacker attempts to enter through the Depot side, it will not be easy.