Guide to playing ‘Thatcher’ in ‘Villa’

Villa is a slightly large battlefield consisting of the basement, 1F, and 2F. The objective location is generated two on the 2F and another two on the 1F, but not on the underground. Due to the following reason, the engagement usually occurs on the 1F and 2F, but sometimes the defenders detour the building through the basement.   Overall, inside of the building is structured complicatedly and there are many rooms for the defending roamers to hide, so if the offensive team does not clear the roamer, it will be a problem at the end. For this reason, the offensive team should pick the counter roaming operator. In general, while some offensive team members confront defenders from the outside, the rest of the units should clear the defending roamer from the opposite side. 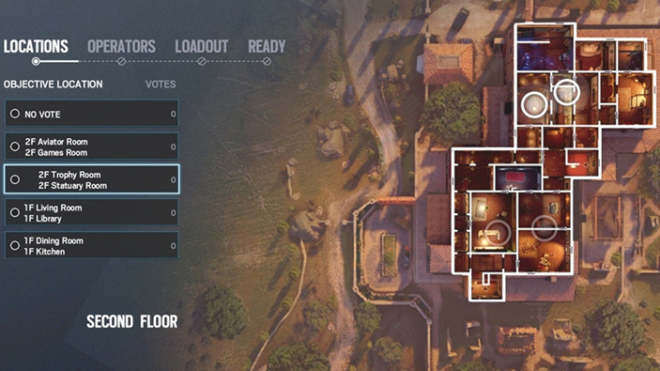 ▲ Villa Objective Location, Even though the building has the basement, the objective location is not generated. Objective locations are displayed only in 1F and 2F.   Thatcher's EMP Grenade can completely destroy the enemy's electronic gadgets and deactivate camera-related equipment. It usually accompanies with Thermite or Hibana to assist hard breaching work around the Bombsite, but it also can be used for other purposes if there is a leftover. For example, throw it near a Bombsite entrance to destroy traps like GU Mine or EDD, or disable camera equipment such as Evil Eye or Yokai Drone.   Thatcher can select L85A2 / AR33 Assault Rifle and M590A1 Shotgun as Primary Weapon. Double shotguns are rarely used, instead, players usually choose between L85A2 and AR33 for ACOG sight. The L85A2 has a decent function with low recoil, but the AR33 can equip an Angled Grip, making the aiming speed quicker but low in capacity. 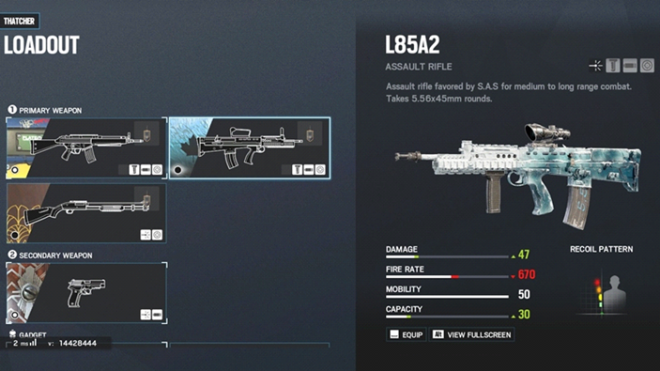 ▲ L85A2 can attach the Vertical Grip, making the aiming speed lower, but it also reduces recoil.       ▣ In case, the site is located at '2F Aviator Room ~ 2F Games Room'   The attackers need to occupy the Study that connects the Aviator Room ~ Games Room. If the team hard breacher pierces the reinforced wall on each side of the Bombsite, the offensive team will be able to take a huge advantage. However, because the Study has doors on both sides, it won't be easy for the offensive team to enter. Due to the following reason, the attackers usually wait out the door, and once the counter roamer approaches from the back, they simultaneously enter.   If the team operates hard breachers, Thatcher should work as a supporter to help the team hard breacher’s work. However, the defensive team will try their best to interfere with the breaching work, such as installing Mira's Black Mirror on the Study or using an impact grenade Trick on the reinforced wall. If the situation is not good, do not try too hard to break through this place because it is widely exposed to the enemies. Rather, I would recommend throwing the EMP Grenade inside the bomb site before entering. 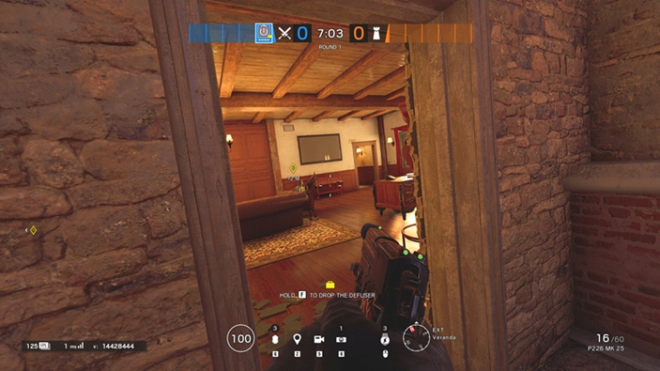 ▲ If you spawn on Ruins and move up to the 2F Veranda, you can look inside the Study. Entering this place is highly important. 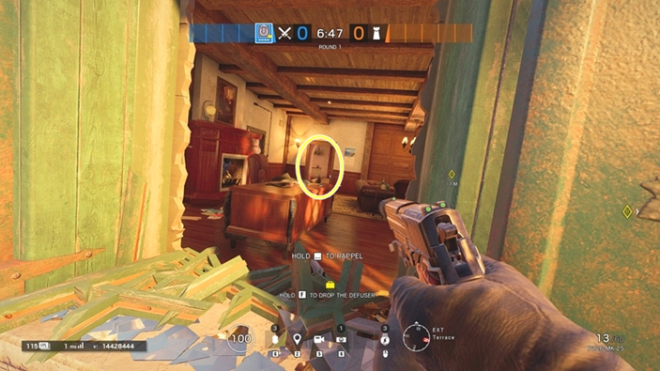 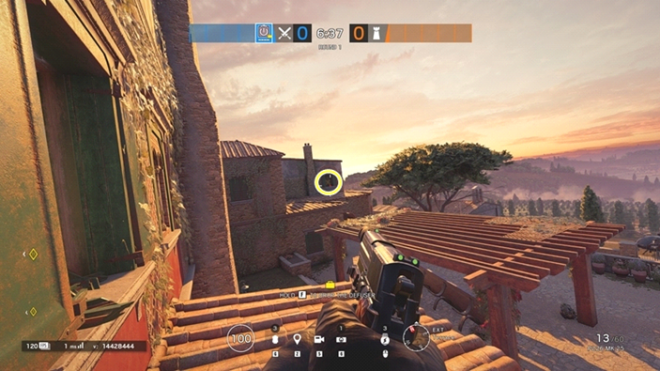 ▲ This place is widely exposed, especially the enemy waiting from the Master Bedroom can shoot directly. 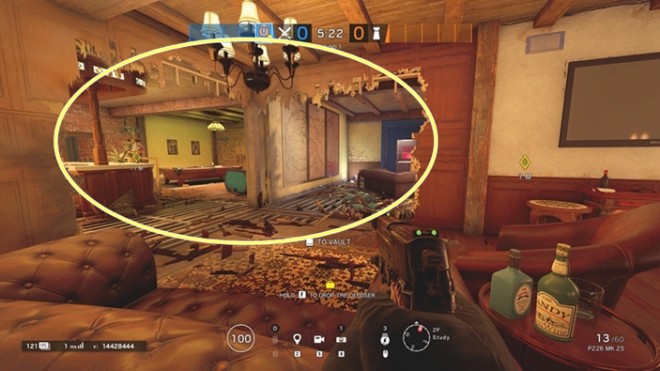 ▲ If you successfully occupied the Study and breached reinforced walls, you can seize an angle looking directly at the Bombsite. 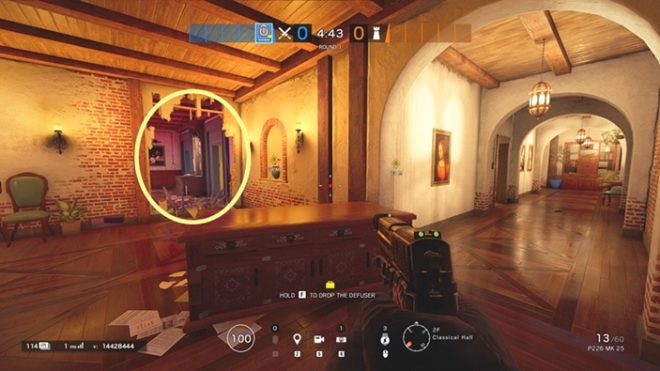 ▲ If you have cleared the Classical Hall from the opposite side, you may try breaching the Hunting Vault reinforced wall.       ▣ In case, the site is located at '2F Trophy Room ~ 2F Statuary Room'   If the attackers are spawned on Fountain, It's good to start checking through the 2F Master Bedroom window from the Bedroom Roof. On the other hand, you also can enter from the far side and narrow down by clearing the roamers.   If the team has a hard breacher, it would be good to enter the Master Bedroom and attempt breaching on a three-piece wall leading to the Statuary Room. Of course, before the hard breacher starts working, Thatcher should assist with the EMP Grenade. If the team doesn't operate the hard-breacher, Thatcher doesn't have to come. He just needs to throw an EMP Grenade wherever the defensive team's electronic equipment might install. 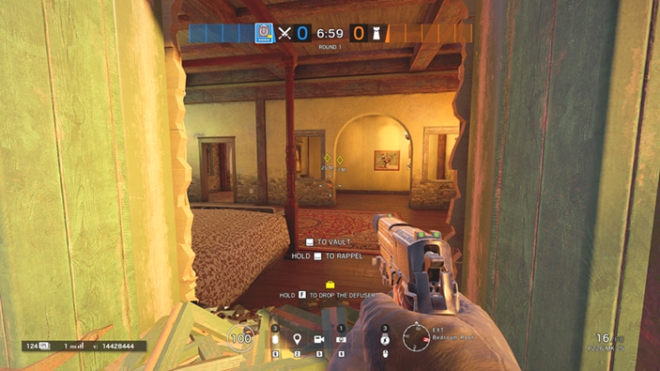 ▲ Check inside from the 2F Bedroom Roof window. 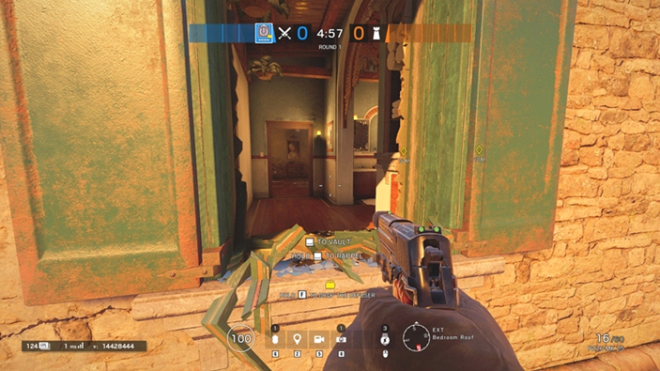 ▲ You may attempt entering through the window leading to the 2F Master Bathroom. 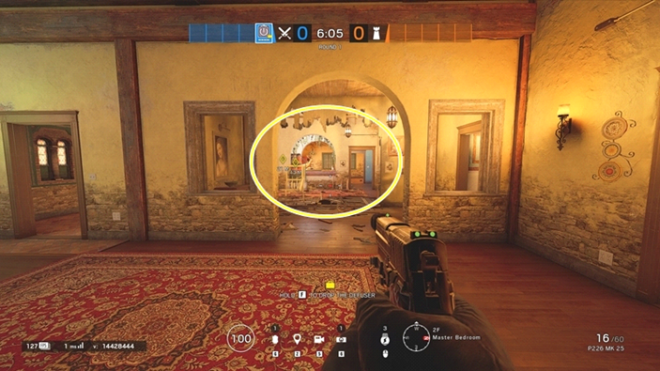 ▲ If you secure the safety around the Master Bedroom, you can breach the wall leading to the Statuary Room. 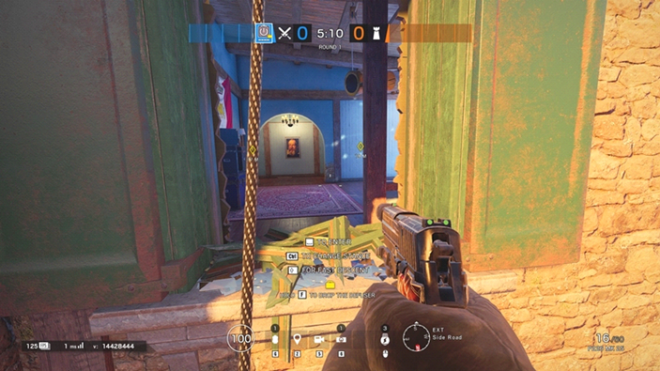 ▲ You can check the Astronomy Room from the exterior Side Road window, but quite risky. 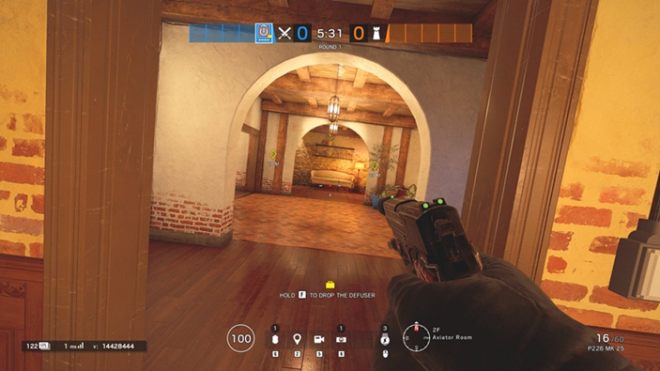 ▲ You just can enter the Study and approach with clearing the defending roamers.       ▣ In case, the site is located at '1F Living Room ~ 1F Library'   The combined area of the Bombsite is quite large, enable attackers to approach form various routes. On top of that, it is also possible to paly vertical and hatch drop straight into the bombsite from the 2F, making a highly favored Objective Location for the attackers. Thatcher is an operator who can use the Breach Charge, so he can play vertical independently in a limited area.   If the team has a hard-breacher, it is not a bad choice to make a new angle because there are many walls that lead to the Bombsite around the 1F Main Hallway. However, because the hard breacher has to work in the middle of the Hallway, it may be vulnerable to a surprise attack, so I would recommend securing his safety. Of course, if Thatcher supports, it will be much safer. Launch attack simultaneously with the team to enable entering the building. 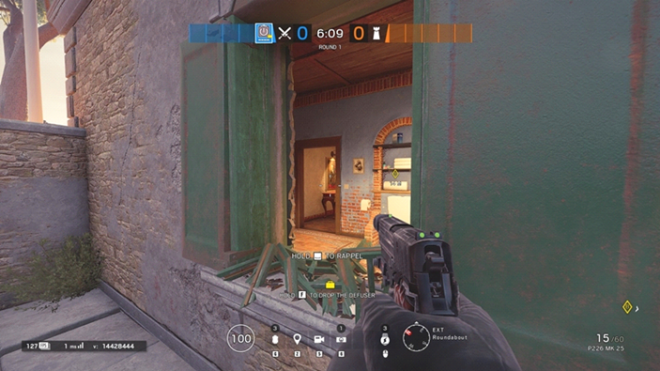 ▲ A window leading to the Toilet right next to the Bombsite. Usually, the attackers open the sidewall and check this window. 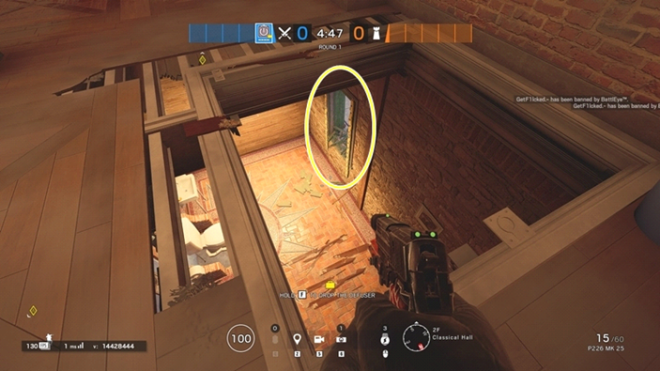 ▲ If the roamer positioned upstairs and checking this window through the hatch, it would be difficult to enter. 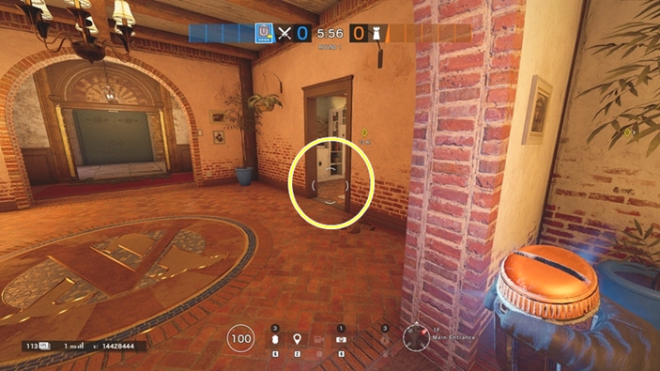 ▲ A route entering through the 1F Main Entrance. Library entrance might have tons of defending gadgets installed. 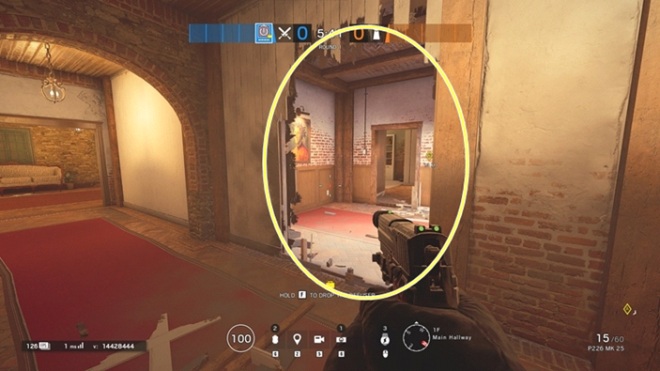 ▲ Main Hallway has many walls leading to the Bombsite but also has a high probability of the defending roamer’s surprise attack. 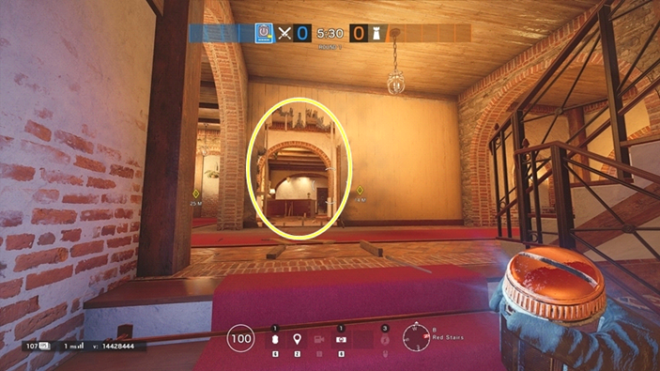 ▲ Likewise, the Red Stairs side reinforced wall is widely exposed, making vulnerable while working on breaching. 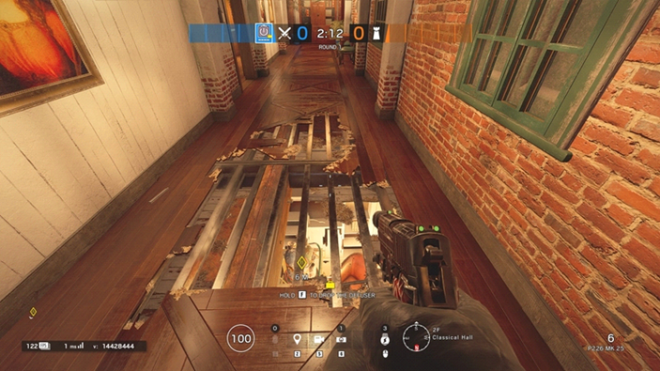 ▲ If you carried the Breach Charge, you can install it on the 2F Classical Hall to attempt the vertical play.       ▣ In case, the site is located at '1F Dining Room ~ 1F Kitchen'   Likewise, because the objective location is generated on the 1F, the attackers can try vertical from the Master Bathroom or Astronomy Room on the 2F. Also, underground Garage has the Pantry Stairs directly leading to the Dining Room, so it is considerable to infiltrate underground if possible.   If the team has a hard breacher, it would be good to enter the Laundry from the exterior Balcony and breach the Living Room reinforced wall. The Shock wire is sometimes installed behind the reinforced wall because if the wall is breached, the offensive team can take a huge advantage. Likewise, throw an EMP Grenade to remove the defensive team's electronic equipment around the reinforced wall. Also, there is a hatch on the ceiling that leads to the 2nd floor Master Bedroom, so make sure you use the drone reconnaissance in advance. 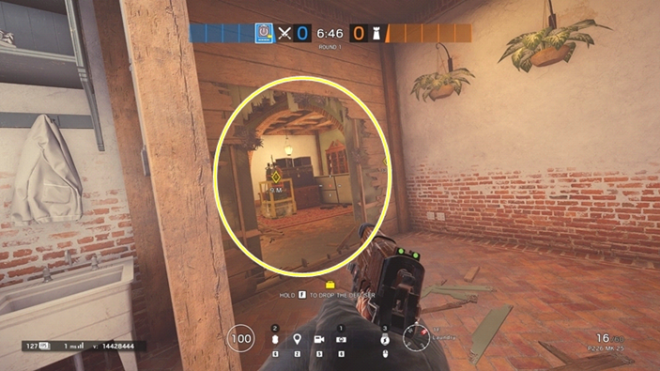 ▲ If you enter the 1F Laundry and breach this wall, the attackers can take a huge advantage. 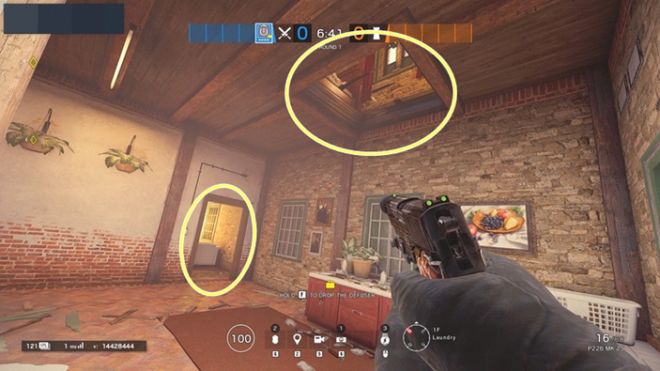 ▲ However, the defenders also can check inside the Laundry from various angles, so they need to secure safety first. 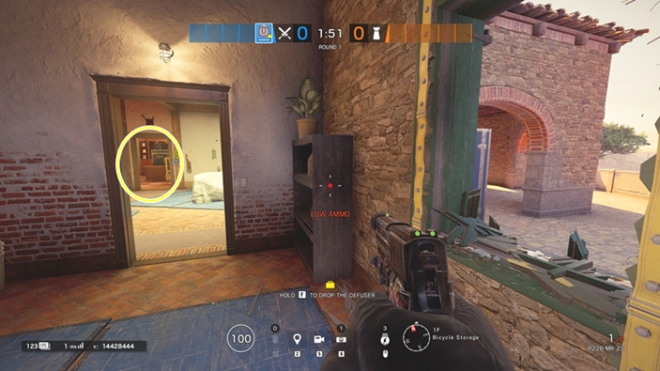 ▲ It is possible to infiltrate the Dining Room through the Bicycle Storage exterior window. 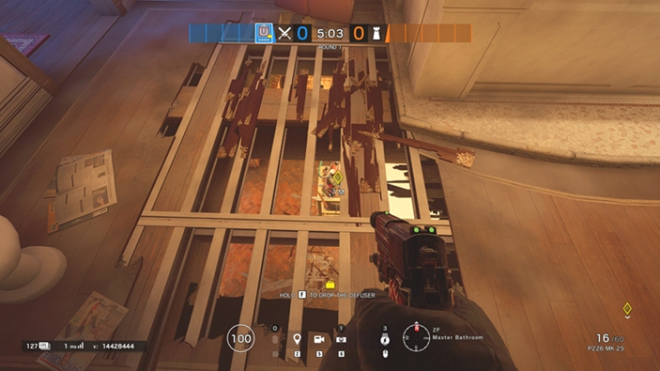 ▲ If you breach the 2F Master Bathroom floor, you can catch the defender hiding behind on the Kitchen. 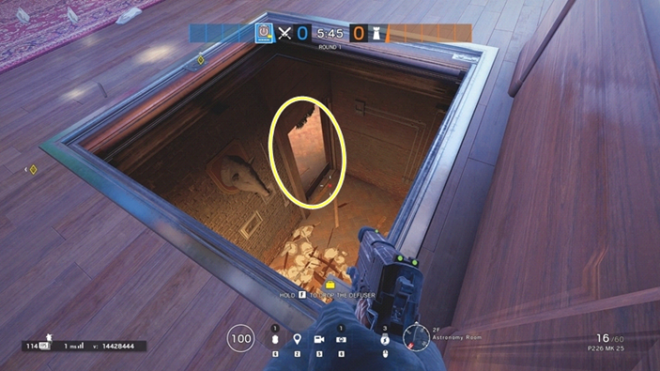 ▲ It is also a good idea to pierce the 1F Back Stairs sidewall. 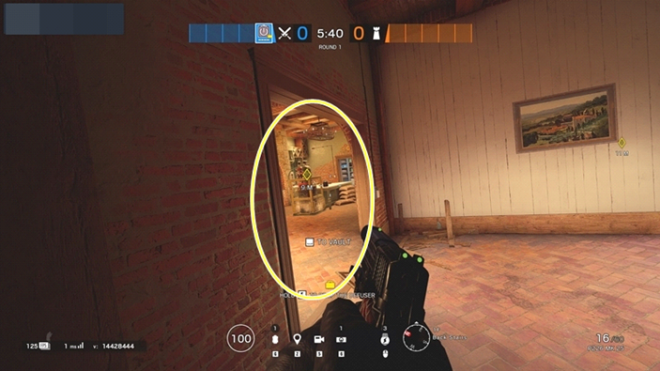 ▲ If you pierce this wall, you can seize an angle from the Kitchen to the Pantry side.