Guide for playing 'Doc' on 'Clubhouse'. 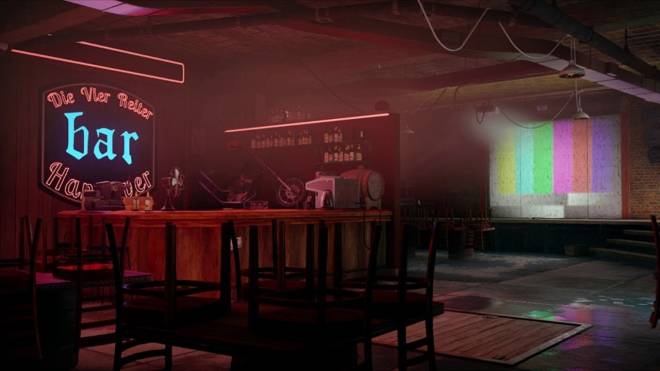 [DISCLAIMER: This guide is intended to be as bare bones as possible in order to give general advice to any new Rainbow Six: Siege players. In addition to this article being opinionated, I would like to also state that zero-sum strats in this game do not exist and the tell of a good Siege player is their decision making and adaptation to the changing battlefield.]     Clubhouse is a triple-level map (consisting of three floors) found both in ranked play as well as professional. The current architecture of the map can favor either attackers or defenders depending upon which team wins the ban phase, as well as which site is being played.   Doc is a one speed, three armour defending operator. Doc’s ability is the ‘Stim Pistol’; a projectile gadget which shoots medical stims, capable of healing teammates with low HP as well as reviving teammates who are in a DBNO state. Doc is most commonly used for the operators MP5 which can be customized to have an ACOG equipped as an optic. Due to the MP5’s low recoil, the ACOG can be highly useful if used to hold long angles on the bomb site. This makes Doc ideal as an anchor.   If you are to be in accordance with the current meta, Doc’s loadout should be as follows; -PRIMARY - MP5 (WITH ACOG) -SECONDARY - LFP586 (Revolver) -UTILITY - Can vary based upon the needs of the team. (Personally I always bring Barbed wire.)   DEFENDING: [2F] CASH(A) - CCTV(B) The primary route of attack on this bomb site will be by the attacking team breaching the east reinforced wall inside of CCTV(B) (also known as ‘Platform wall’) as this will provide a direct route for attackers to plant the defuser behind ‘Server Rack’ located inside of the CCTV bomb site. Due to the operators long-range capabilities, Doc is the perfect choice for defending the Garage; a pivotal room which will play a larger role in determining which team will win the round. It is common for defenders to designate Doc to play on the ‘Catwalk’ (the catwalk located inside of the garage) while supporting the player with team utility like an ADS and barbed wire from Jager or even extra reinforcements which can be used on the first floor garage walls. Reinforcing these walls is done to force attackers to either waste utility on breaching the garage walls or to bottleneck the doorway leading into the garage from the outside - this is considered a death trap as any defender inside of garage has an almost incontestable advantage from the catwalk railing.   POSITIONING: [2F] CASH(A) - CCTV(B) 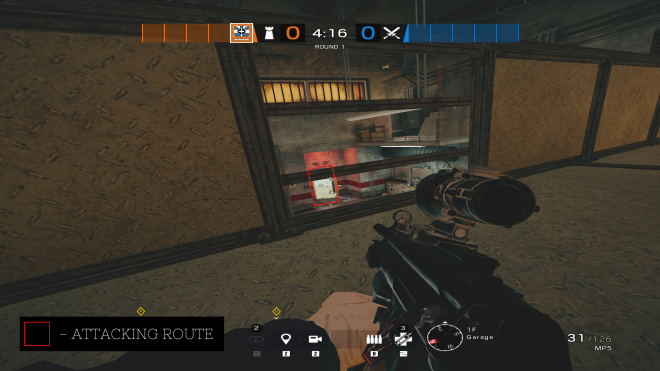 DEFENDING: [2F] BEDROOM(A) - GYM(B) The primary route of attack on this bomb site will be by the attacking team breaching the reinforced wall between outside ‘jacuzzi’ and the bedroom/gym hallway (commonly known as Jacuzzi wall). After breaching the Jacuzzi wall, attackers will attempt to plant the defuser inside of Gym(B). As Doc, I would recommend that you play inside of Bathroom. This will position you in a central location between the two bomb sites which will allow you to hold long angles into construction or reposition into more assertive positions if the need arises. Due to this bomb site being attacker sided and infrequently played in ranked, the round may play out oddly - this will call for you and the rest of the defending team to adapt quickly. Good positioning will prove to be a helpful asset under these circumstances.   POSITIONING: [2F] BEDROOM(A) - GYM(B) 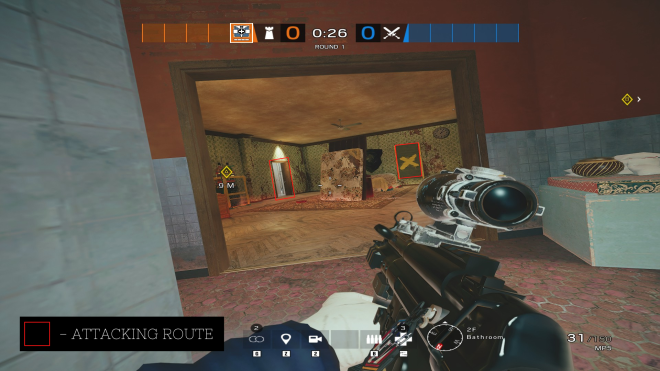 DEFENDING: [1F] BAR(A) - STOCK(B) The primary route of attack on this bomb site will be by the attacking team planting the defuser inside of one of the two doorways located inside of Stock(B). Although the attackers have a very direct route to the bomb site from the outside, successfully planting the defuser inside of Stock(B) can be difficult due the exposure attackers are under from ‘stage’ (located inside of Bar(A)) while planting the defuser. For this reason, Doc should be positioned by stage as the operators ACOG can prove useful in holding incredibly long angles through Stock(B) from the stage located inside of Bar(A). Communicate with defending operators like Smoke, Castle, or Maestro to use their shotgun to destroy the reinforced wall separating Bar(A) and Stock(B) - this will provide you with a clear line of sight through Stock(B).   POSITIONING: [1F] BAR(A) - STOCK(B) 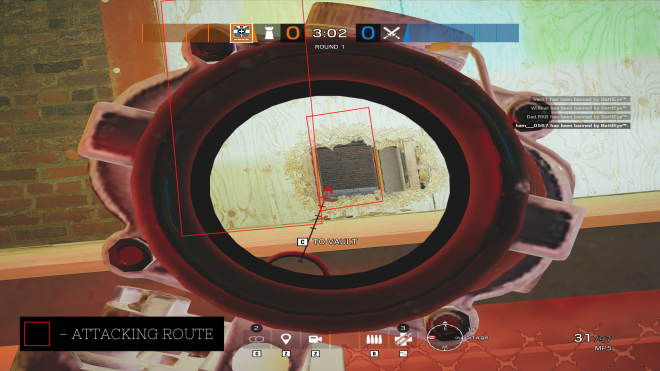 DEFENDING: [BSMNT] CHURCH(A) - ARSENAL (B) The primary route of attack on this bomb site will be by attackers establishing vertical control over the bomb sites by opening the hatches located on the ceiling of ‘Moto connector’ and Arsenal(B). To do this, attackers will first need to gain control of the first floor. Doc should play inside of the ‘Dirt Tunnel’ - connected directly to Arsenal(B) through the northern wall. It is common for defenders to bring a Lesion or Ela to place traps deeper inside of ‘Dirt’ to give teammates playing inside of Arsenal a heads-up while attackers are making their advance. Doc is a great operator to be positioned inside of ‘Dirt’ due to the operators ACOG which will provide the player with the ability to contest multiple avenues of attack (Blue, Dirt, or Main Hallway) from this one position.   POSITIONING: [BSMNT] CHURCH(A) - ARSENAL (B) 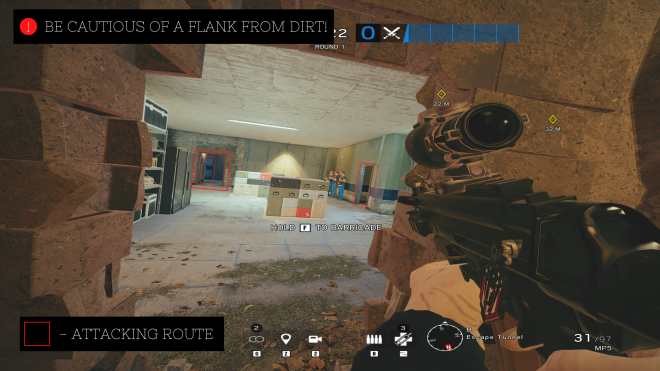