Guide to playing ‘Castle’ in ‘Bank’

The Bank is a slightly large-sized battlefield consisting of basement, 1F, and 2F. In Bank, the objective locations are generated one on the 2F, two on the 1F, and the last one in the basement. Since there are many windows on the second floor, the attackers often can check the inside the bombsite with rappelling. The 1F bombsite allows the offensive team to play vertical from the top floor. However, the basement doesn’t have a single-window leading inside the building, and there is no risk of being vertical. Due to the following reasons, the basement objective location is the most favored by the defense team.   Unlike the basement or the 2F, the 1F of the Bank has Lobby, which is larger than the other floors. For this reason, there is a lot of room for the defensive Roamer to hide, so if the offensive team spawned on the north and attempt entering the Main Entrance, they should use a drone recon carefully. On the other hand, the basement and the 2F have relatively less number of rooms for the defenders to hide, but still, there are limited routes for the offensive team to approach. Therefore, the game appearance often changes depending on how the defenders set up around Bombsite. 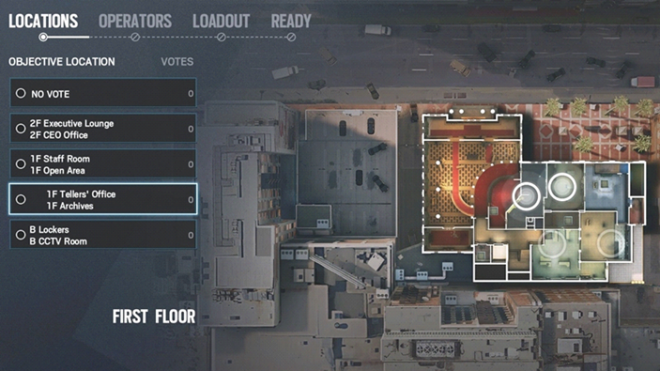 ▲ Bank Objective Location, 1F is larger compared to the other floors, making roamers perform well.     Castle is an operator with the ability to install the Bulletproof Panel that is not pierced with bullets on windows or door barricades. It is impossible to block the movement of the attackers because the Bulletproof Panel gets destroyed by the explosives such as Breach Charge or 12 times of close-range attack. However, considering the fact that delaying the attacker’s time and limiting the angles, it can be helpful equipment for the defenders.   The Bulletproof Panel’s purpose is not just only blocking the shooting angle, but also making attackers consume explosives. The Bulletproof Panel can make attackers consume long-range explosives such as Frag grenade, Ash's Breaching Round, and Zofia's KS79 Lifeline, and prevent them from destroying other defense teams' main gadgets afterward. For this reason, it has a good synergy effect with other defensive gadgets such as Barbed Wire, Deployable Shield, Evil Eye, and Volcán Shield. 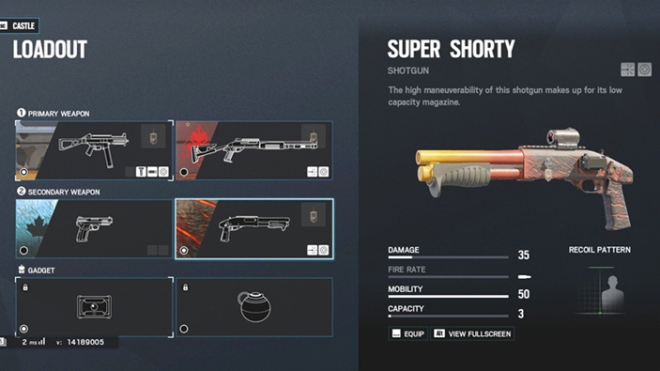 ▲ Super Shorty shotgun can be used as opening the hatch or making the rotation.       ▣ In case, the site is located at '2F Executive Lounge ~ 2F CEO Office'   A 2F bombsite is a place where the attacking team has a lot of angles to check inside from the outside, so the defenders have to settle down well. Usually, the attackers often stick to the outer wall of the building and attack through the window. If Castle installs the Bulletproof Panels around the Bombsite, it can block few angles.   In addition to the windows around the CEO Office and Executive Lounge, the attacker occasionally attacks from the western Lobby exterior wall or on the Exterior Parking rooftop next to the bank. Because the Exterior parking is quite far, sniper operators such as Glaz and Kali usually set position there. If the offensive team snipers undiscriminatingly attack across, defenders will be stuck, so players usually pick Castle to prevent this happening.   If the offensive team runs the hard breacher, it will try to breach the CEO Office side reinforced wall from the Skylight Stairwell. To prevent this, it is also good to use Bandit or Kaid, but without them, Castle can use the impact grenade to interfere with the breaching work. Make a hole with a shotgun at the top of the reinforced wall, hear the attack team's breaching work, and throw an impact grenade on the ceiling across the reinforced wall. 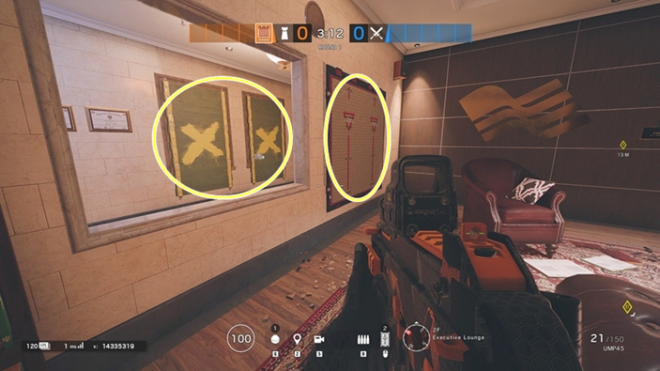 ▲ If you set up the Bulletproof Panel at this point, it blocks the angle leading to the Executive Lounge. 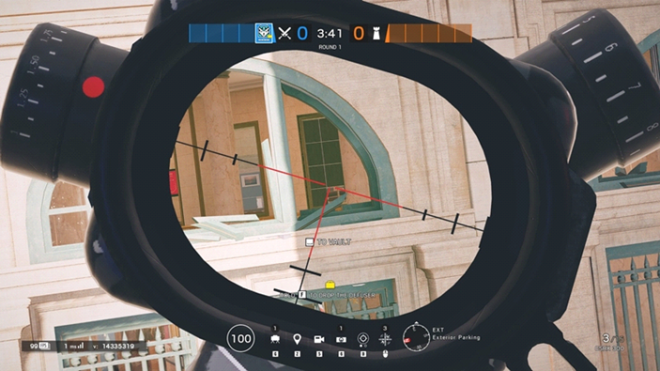 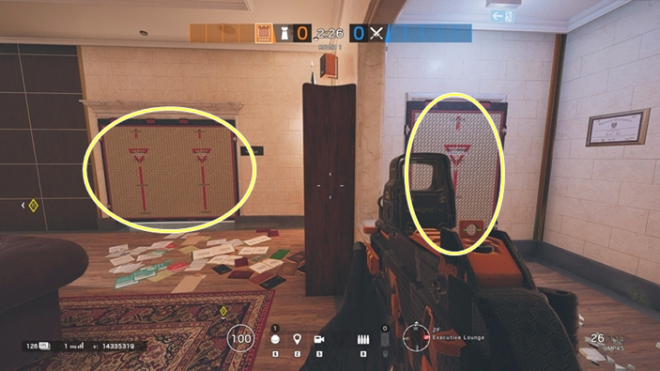 ▲ If you set up the Bulletproof Panel here, you can block the angle from the Exterior Parking. 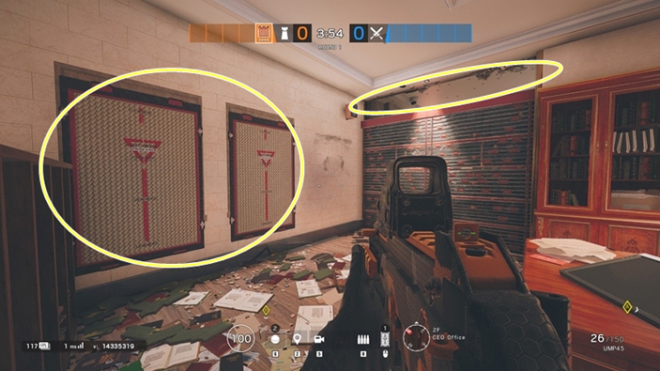 ▲ Make sure you pierce the upper wall of the CEO Office reinforced wall with a shotgun. 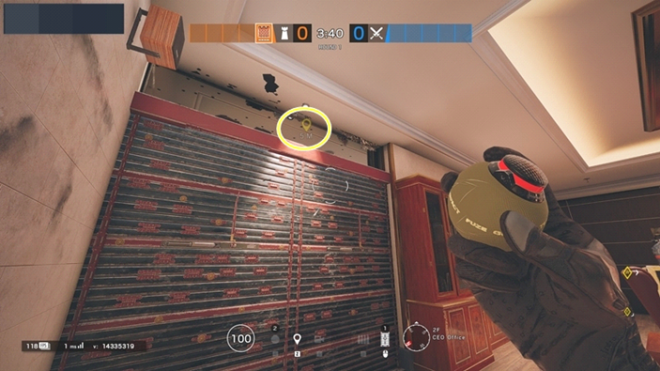 ▲ Because, if you hear the hard breaching should from the opposite side, you can throw the impact grenade on the ceiling and destroy it. 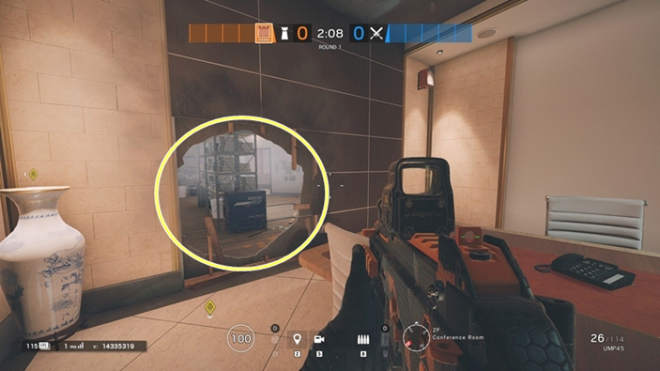 ▲ Make the rotation in between the Conference Room and the Janitor Closet. 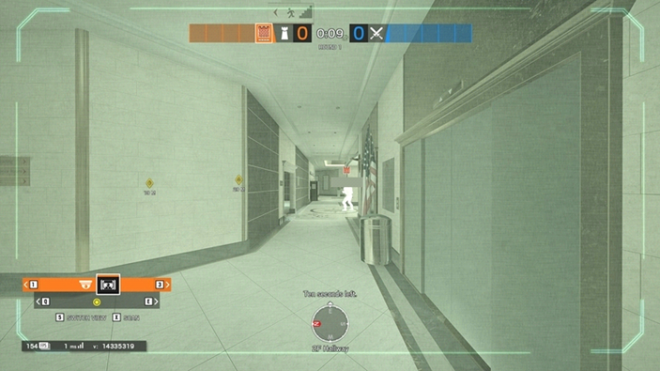 ▲ It is also a good idea to install the Bulletproof Camera showing the whole 2F.       ▣ In case, the site is located at '1F Staff Room ~ 1F Open Area'   One of the two places where the objective location is created on the first floor, and it’s quite large with three hatches leading from the 2F, which requires more attention when defending. Especially, the 2F Stock Trading Room and Janitor Closet, except for the Hallway, need a defending roamer because the floor is made of destructible material.   There is a window that leads to the Bombsite from the outside, so it is good for Castle to install the bulletproof panel here, but except for that, there is no other place else to install. If you block the door between the Staff Room and Open Area could disrupt the team's passage, so it might be better to move up to the 2F and use the reinforcement tool to block the Stock Tracking Room or the Janitor Closet side where the offensive team often tries to break in. 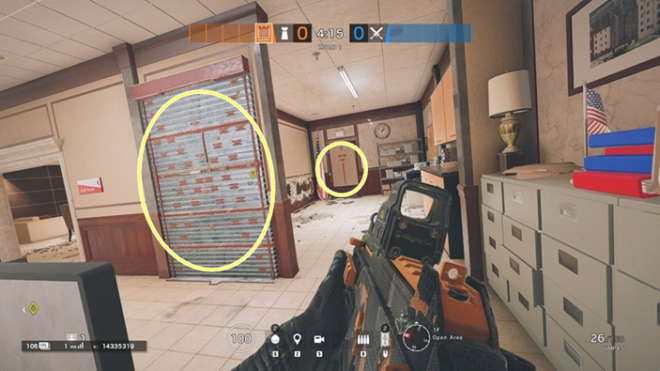 ▲ Because of the window leading to the Printer Room, you must block it with the Bulletproof Panel. ▲ You should pierce this wall with the shotgun and check, in case the attacker breaches the Bulletproof Panel and enter. 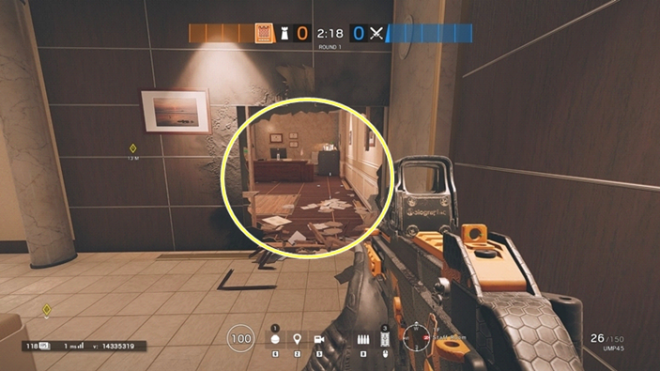 ▲ If you make the rotation leading to the Admin Office, it will be useful. 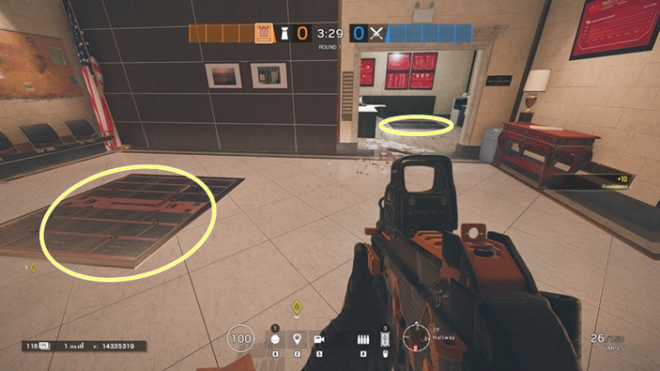 ▲ Make sure you reinforce the 2F hatches.

▲ To protect those hatches, installing the Bulletproof Panel on the Stock Trading Room window is a good idea.       ▣ In case, the site is located at '1F Tellers' Office ~ 1F Archives'   This place is quite a closed area because there is no window from outside to the Bombsite, and there is no hatch directly connected to the Bombsite. Because the Tellers' Offices and Archives are both narrow, defenders purposely break the walls leading to the Admin Office and use a wide space to defend.   Although there seems to be no place for installing the Bulletproof Panel, there still has a way to utilize it depending on the setup. As this objective location is vulnerable to vertical play, it would be good to install the Bulletproof Panel on the 2F CEO Office, Executive Lounge, and Conference Room hallway. Also, you can install one on the Tellers' Office entrances to restrict the attacking route or block the Archives window to block the angle from the Skylight Stairwell. 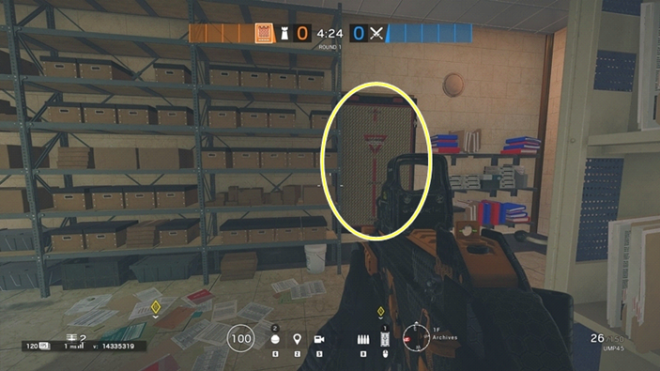 ▲ Install the Bulletproof Panel on the Archives window to block the enemy checking inside the Archives from the Skylight Stairwell. 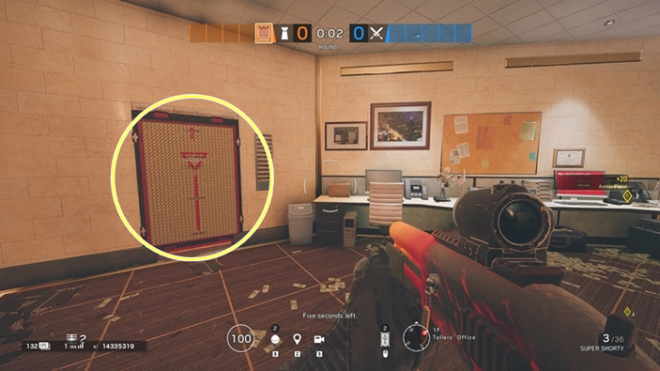 ▲ Block either of the entrance leading to the Tellers' Office to limit the attacker’s route. 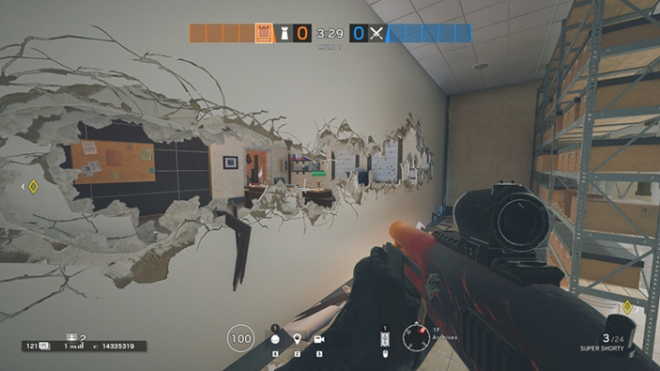 ▲ Like always, it is good to make the rotation in between the A site and B site. 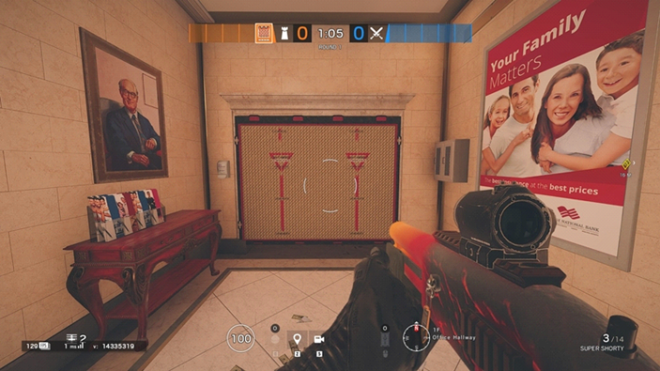 ▲ The Bulletproof Panel installation point blocking the driveway between the Lobby and Office Hallway. 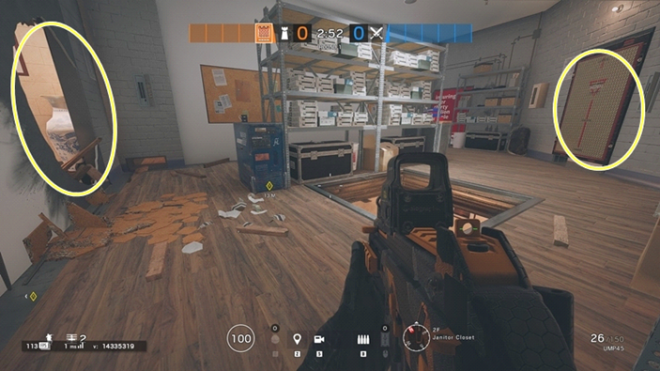 ▲ An example of a 2F Janitor Closet Setup. Open the hatch and wait for the enemy approaching the Admin Office.       ▣ In case, the site is located at 'B Lockers ~ B CCTV Room'   The basement has no windows and even the 1F floor is made of non-destructive material, so it is impossible to play vertical. However, there are many separate routes to enter near the basement Bombsite, such as the Sewer and Bank Garage, and attackers often come through here. For this reason, the defense team also prepares various setups, including the installation of Mira's Black Mirror in this direction.   Since there is no suitable place to install the Castle's Bulletproof Panel, Castle recommends playing a sub-anchor protecting the hatch of Open Area on the 1F. In this case, Castle should block the windows and doors that lead to the Open Area and wait for the attackers to approach. However, because Castle's primary weapon, UMP45, has low RPM, it is better to avoid a 1-on-1 match against the enemy and try to catch back. 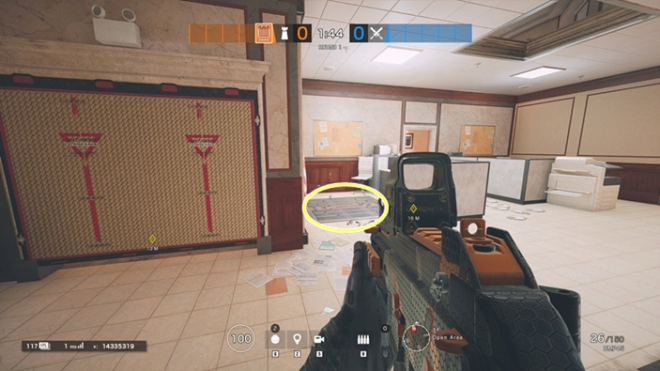 ▲ If the 1F Open Area and Admin Office’s hatch is pierced, the defenders will set in danger. 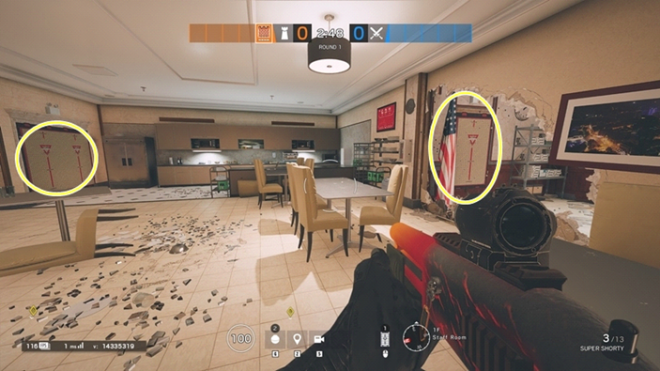 ▲ Block all the windows leading to the 1F Open Area with the Bulletproof Panel and protect the hatch. 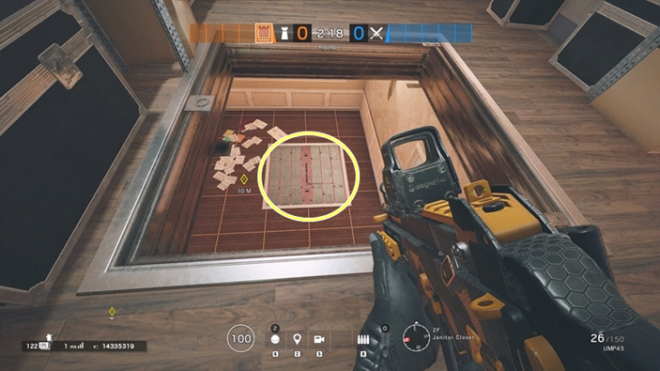 ▲ Checking the Admin Office hatch from the 2F Janitor Closet hatch is also a good strategy.