Guide for playing 'Kali' on 'Coastline' [DISCLAIMER: This guide is intended to be as bare bones as possible in order to give general advice to any new Rainbow Six: Siege players. In addition to this article being opinionated, I would like to also state that zero-sum strats in this game do not exist and the tell of a good Siege player is their decision making and adaptation to the changing battlefield.]   Coastline is a double-level map (consisting of two floors) found both in ranked play as well as professional. The current architecture of the map gives a large advantage to the attacking team due to the ease of access attackers have to map control from the outside of the building. Kali is an attacking two speed operator equipped with a sniper rifle, SMG pistol, and a gadget capable of destroying any defensive utility placed within the radius of her explosive micro charge. Kali will most commonly be used as an alternative to Thatcher as her ability is capable of destroying the defensive teams entry denial utility (Bandits’ batteries, Mutes’ jammers, and Kaids’ electro-claws). The operator is also useful for flank watch and holding long angles as her sniper rifle is incredibly powerful and capable of downing defenders with one bullet. If you are to be in accordance with the current meta, Kali’s loadout should be as follows: PRIMARY - CSRX 300 (Attachments are unavailable on this weapon.) SECONDARY - C75 Auto (No attachments) UTILITY - Claymore   ATTACKING SPAWN LOCATIONS 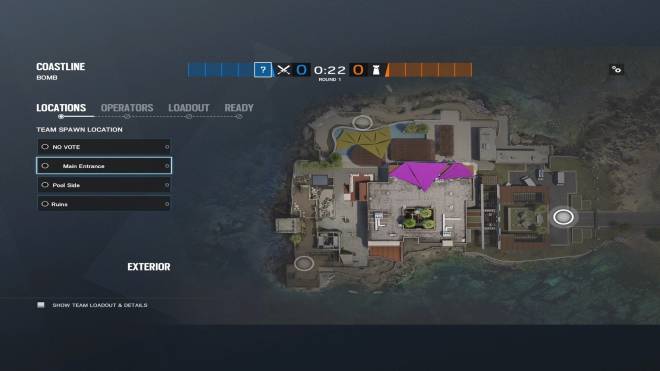 ATTACKING: [2F] BILLIARDS(A) - HOOKAH(B) The primary route of attack on this bomb site will be by the attacking team rappelling on the double window of Billiards(A) and the single window of Hookah(B) while vertical soft destructors like Buck and Zofia gain control of the first floor Sunrise bar and proceed to destroy the ceiling of Sunrise - which is the flooring of Hookah(B). Kali can be useful on this bomb site by acting as a long-range supporting operator from ‘Ruins’ (the structure outside of the main building located on the western side of the map). Kali’s sniper rifle is incredibly precise as the operator has a scope with a variable zoom in addition to the rifle being able to down any defender with just one bullet. Ruins offers the player powerful positioning on this specific bomb site as there are a variety of windows and doorways which provide the player with clear lines of sight directly into the bomb site.   RUINS SPAWN LOCATION ATTACKING: [2F] THEATER(A) - PENTHOUSE(B) The primary route of attack on this bomb site will be by the attacking team gaining control over the second VIP room from the second floor balcony located on the north side of the building. After gaining control over VIP and Hall of Fame, attackers will breach the reinforced wall between VIP and Penthouse(B) as this will provide attackers with a safe and clear pathway to the default plant spot in the corner of Penthouse(B) by the master bed. Kali will be most useful on this bomb site by acting as the attacking teams alternative to Thatcher as it is very common for defenders to use entry denial gadgets on the V.I.P. wall separating Penthouse(B) and V.I.P.   POOL SIDE SPAWN LOCATION ATTACKING: [1F] BLUE(A) - SUNRISE(B) The primary route of attack on this bomb site will be by the attacking team entering through the Pool Entrance located on the north western corner of the building. Attackers will typically gain control of second floor Hookah as this will enable attacking soft destructors (Buck, Zofia, Ash, or Sledge) to destroy the ceiling of Sunrise and eliminate any defending anchors playing behind ‘couches’ or ‘bar’. Kali should play in the same way the operator is played on Hookah-Billiards as any player positioning themselves on ‘Ruins’ will have strong lines of sight into either one of the two first floor bomb sites; Kali in particular is a great fit for this play style due to the operators long-range capacity.   MAIN ENTRANCE SPAWN LOCATION ATTACKING: [1F] KITCHEN(A) - SERVICE ENTRANCE(B) The primary route of attack on this bomb site will be by the attacking team planting the defuser inside of the doorway of service entrance leading to the outside located on the eastern side of the building. Attackers will also commonly attempt control of the second floor VIP, Theater, and Penthouse rooms as this will allow attackers to destroy the ceiling of Kitchen(A) and Service(B). Kali can be incredibly powerful on this bomb site if used in coordination with Hibanna. If the reinforced wall separating Service(B) and the main lobby is breached by Hibbana, Kali can prevent any defenders on the bomb site from rotating between the two bomb sites in addition to be able to prevent defenders from having a save location to anchor in as ‘Beer’ is a common spot for defenders like Smoke or Echo to play in.     Thank you for reading and I hope this was helpful for you guys. If you are interested in more content or want to ask me questions, you can always find me on my social media accounts: TikTok - FTWRK Twitch - footwork6 Instagram - footwork.R6   Thanks!