Guide for playing 'Kali' on 'Kafe'

[DISCLAIMER: This guide is intended to be as bare bones as possible in order to give general advice to any new Rainbow Six: Siege players. In addition to this article being opinionated, I would like to also state that zero-sum strats in this game do not exist and the tell of a good Siege player is their decision making and adaptation to the changing battlefield.]   Before we get started on the actual guide, I wanted to share a cool fact about the history behind the map! Kafe Dostoyevsky, usually just called 'Kafe', was named and designed after the famous Russian author Fyodor Dostoevsky and his life in Russia during the 19th century. As I am sure most of you all know, the map features a variety of unique and, some might say random, rooms like the 'Train Museum' and 'Mining Room'. However these rooms actually aren't all that out of place as you might think. After Dostoevskys' arrest in 1849, he was sent to Omsk, Siberia to work at labor camp for four years which consisted primarily of mining - that's where we get 'Mining'. Luckily, 'Train' was not inspired from such a dark aspect of the great Russian authors life. In fact, this roamers high-way was likely named after the numerous mosaics presently found in the metro systems of Russia made in honor of the world renowned novelist.   Okay! Now that we got our history out of the way lets get back to the reason you came to read this article in the first place.   Kafe is a triple-level map (consisting of three floors) found both in ranked play as well as professional. The current architecture leaves the map fairly balanced since the rework of the map. Kali is an attacking two speed operator equipped with a sniper rifle, SMG pistol, and a gadget capable of destroying any defensive utility placed within the radius of her explosive micro charge. Kali will most commonly be used as an alternative to Thatcher as her ability is capable of destroying the defensive teams entry denial utility (Bandits’ batteries, Mutes’ jammers, and Kaids’ electro-claws). The operator is also useful for flank watch and holding long angles as her sniper rifle is incredibly powerful and capable of downing defenders with one bullet. If you are to be in accordance with the current meta, Kali’s loadout should be as follows: PRIMARY - CSRX 300 (Attachments are unavailable on this weapon.) SECONDARY - C75 Auto (No attachments) UTILITY - Claymore   ATTACKING: [3F] BAR(A) - COCKTAIL(B) The primary route of attack on this bomb site will be by the attacking team gaining control over Cigar as this will allow attackers to breach the reinforced wall separating Cigar and Freezer and in turn flush out any defenders playing inside of Freezer. After eliminating defenders inside of the Freezer, attackers will attempt to plant the defuser under the cover of smoke behind one of the wooden counters inside of Bar(A). Kali can be useful on this bomb site by acting as a Thatcher alternative in assisting the attacking teams hard breacher with opening up the reinforced walls separating Cigar and the Top of Red Stairs as well as the wall separating Cigar and Freezer as there is commonly some type of entry denial (Bandit Battery, Mute Jammer, or Electro-Claw) placed on these walls to prevent attackers from breaching them.   CHRISTMAS MARKET SPAWN LOCATION 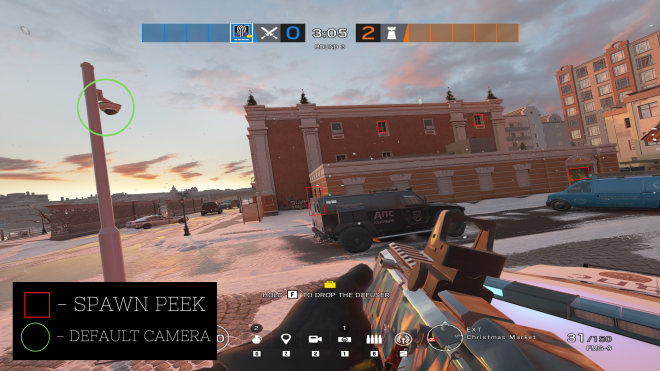 ATTACKING: [2F] FIREPLACE(A) - MINING(B) The primary route of attack on this bomb site will be by the attacking team gaining control of the third floor as the entirety of the ceiling of Fireplace(A)-Mining(B) is able to be destroyed by attacking soft destructors. Kali will be useful here by assisting the attacking teams hard breacher in breaching the reinforced hatch located inside of Cigar as this will provide attackers with ability to prevent defenders from using the Train Room to rotate between the two bomb sites. Kali may also be needed if attackers want to breach the reinforced wall separating the Fireplace(A) and 2F White Stairs Hallway.   RIVER DOCK SPAWN LOCATION 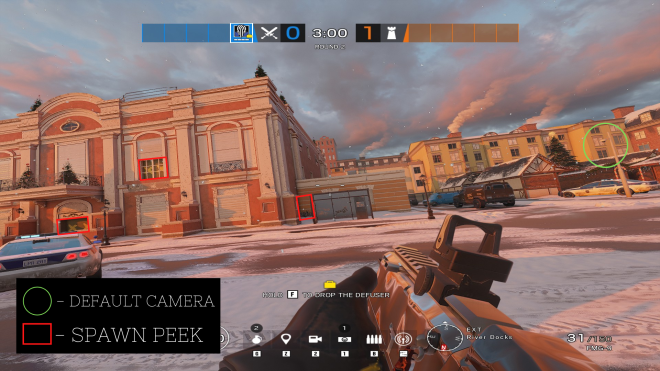 ATTACKING: [2F] READING(A) - FIREPLACE(B) The primary route of attack on this bomb site will be basically identical to attacking Fireplace and Mining. Attackers will prioritize control over the third floor as this will allow for vertical pressure on the defending anchors. The biggest thing to keep in mind while attacking any of the four bomb sites on the second floor of Kafe is that defenders usually understand how unviable it is to play inside of the bomb sites and will often instead choose to defend from the outside of Reading and Fireplace and play inside of adjacent second floor rooms and hallways. Kali can be useful in preventing defenders from playing around the 2F Pillars if the player positions themselves either on the northernmost second floor balcony or by repelling on the 2F west Pillar double window.   BACK ALLY SPAWN LOCATION 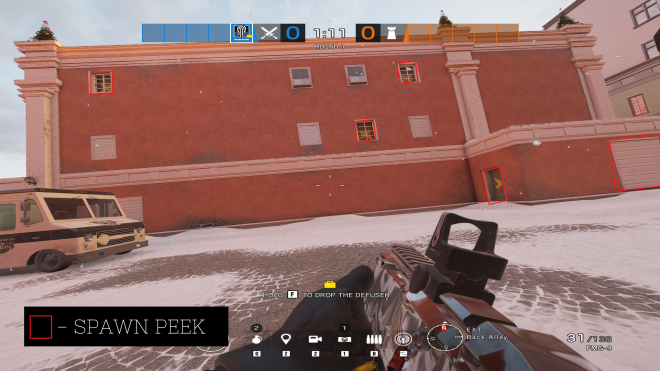 ATTACKING: [1F] SERVICE(A) - COOKING(B) The primary route of attack on this bomb site will be by the attacking team gaining control of large and small Bakery, this will allow attacking hard breachers like Thermite and HIbanna to breach the reinforced wall between Cooking(B) and large Bakery. It is common for defenders to Kaid or Bandit trick the bakery-cooking wall as defending Cooking(B) is almost impossible to do after the wall has been opened. Kali will be crucial on this bomb site as Thatcher is commonly banned in the current meta and the attackers ability to breach the reinforced wall separating Service(A) and Bakery will determine their success in the round. Kali will be needed in addition with Thermite or Hibanna in destroying the defenders entry denial and breaching the Bakery wall.     Thank you for reading and I hope this was helpful for you guys. If you are interested in more content or want to ask me questions, you can always find me on my social media accounts TikTok - FTWRK Twitch - footwork6 Instagram - footwork.R6 Thanks!