Guide for playing 'Kali' on 'Consulate' 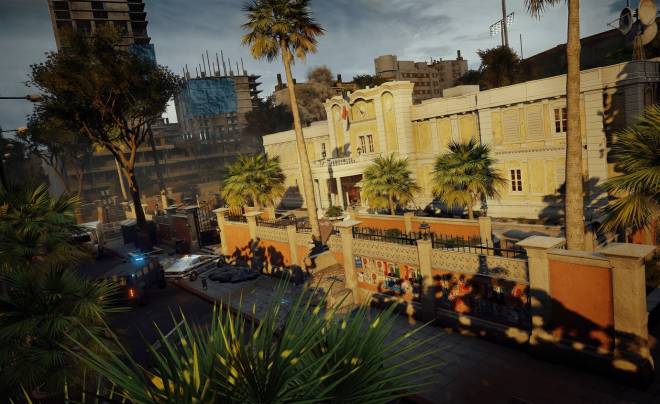 [DISCLAIMER: This guide is intended to be as bare bones as possible in order to give general advice to any new Rainbow Six: Siege players. In addition to this article being opinionated, I would like to also state that zero-sum strats in this game do not exist and the tell of a good Siege player is their decision making and adaptation to the changing battlefield.]   Consulate is a triple-level map (consisting of three floors) found both in ranked play as well as professional. The current architecture of the map gives a significant advantage to the attacking team due to the high amount of exposure each bomb site is vulnerable to from the outside. Kali is an attacking two speed operator equipped with a sniper rifle, SMG pistol, and a gadget capable of destroying any defensive utility placed within the radius of her explosive micro charge. Kali will most commonly be used as an alternative to Thatcher as her ability is capable of destroying the defensive teams entry denial utility (Bandits’ batteries, Mutes’ jammers, and Kaids’ electro-claws). The operator is also useful for flank watch and holding long angles as her sniper rifle is incredibly powerful and capable of downing defenders with one bullet. If you are to be in accordance with the current meta, Kali’s loadout should be as follows: PRIMARY - CSRX 300 (Attachments are unavailable on this weapon.) SECONDARY - C75 Auto (No attachments) UTILITY - Claymore   ATTACKING: [2F] MEETING(A) - OFFICE(B) The primary route of attack on this bomb site will be by the attacking team rappelling on the second floor windows of Office(B), Meeting(A), Conector, and Bathroom. The attackers have a huge advantage on this bomb site due to the amount of control which can be had by just rappelling on the windows, attackers can cut off any and all rotates between Office(A), Meeting(B), Long Desk, and Yellow Stairs without even coming inside the building. Due to the amount of control which can be had from the outside, attackers can dedicate the majority of their personnel and resources safely from the outside while only having a few attackers actually enter the building. Kali should act as one of the support operators rappelled on the second floor windows. The most advantageous position for Kali to play on will be on either Yellow Stairs window or skylight as her gadget can be used to destroy an of Jager’s active defense systems placed on the top of Yellow Stairs; allowing attacking operators with frag grenades to eliminated anybody play at the top of Yellow Stairs.   GAS STATION SPAWN LOCATION 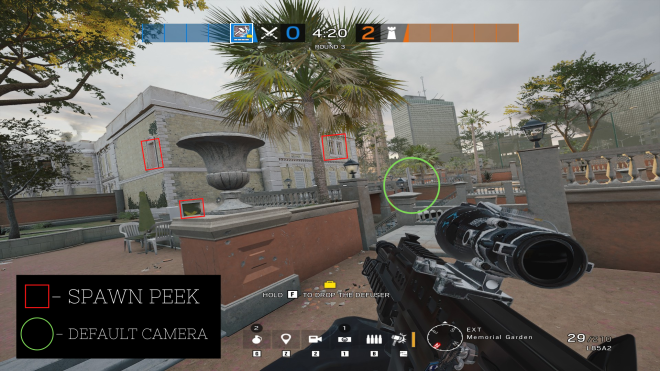 ATTACKING: [2F] PRESS(A) - LOBBY(B) The primary route of attack on this bomb site will be by the attacking team planting the defuser inside of the outside double door leading into Lobby(B) from the south of the bomb site. This is the most common strategy due to the safe and direct route to the bomb site the attacking team is given in addition to the attackers not needing too much map control in order to successfully plant the defuser. That being said, some map control is still required by attackers before planting the defuser. It is very common for defenders to have a presence inside of the second floor Meeting Room as this provides defenders with the ability to open the flooring inside of Meeting Room which will provide any defenders on the second floor an clear line of sight on the default plant spot inside of Lobby(B) without over exposing themselves to the outside. Kali has a variety of positions she can play from the outside of the Lobby(B) double door which will provide the player with vital long angles necessary for covering teammates while they plant the defuser.   POLICE LINE SPAWN LOCATION 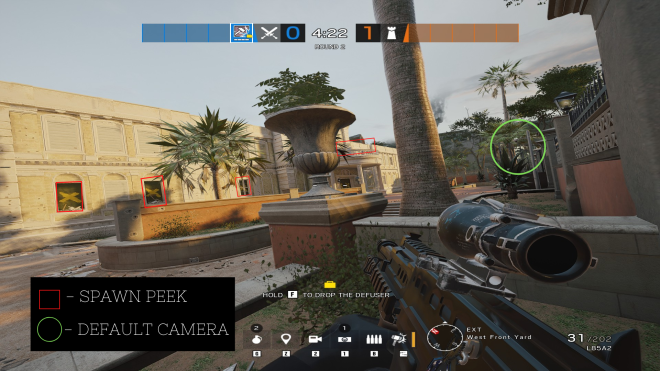 ATTACKING: [1F/BSMNT] TELLERS(A) - ARCHIVES(B) The primary route of attack on this bomb site will be by the attacking team entering the building through the first floor Visa Entrance on the eastern side of the building and proceeding to gain control of Visa Office. Before gaining control over Visa Office, the attacker must first deduce whether or not the defenders are playing inside of the second floor Administrators Office as this will be the defending teams primary method for defending Tellers(A) due their ability to open the flooring of Administrator's Office and play the vertical angles against attackers approach from either Visa Entrance or Spiral Hallway. Kali can be useful on this bomb site by playing outside of the building on the south side of the map near the outside garden half walls which can look into the Main Lobby and Visa Stairs first floor landing window. As Kali, your job will be to prevent the defenders from rotating up Visa Stairs and through the Main Lobby and Statue.   RIOT BARRICADE SPAWN LOCATION 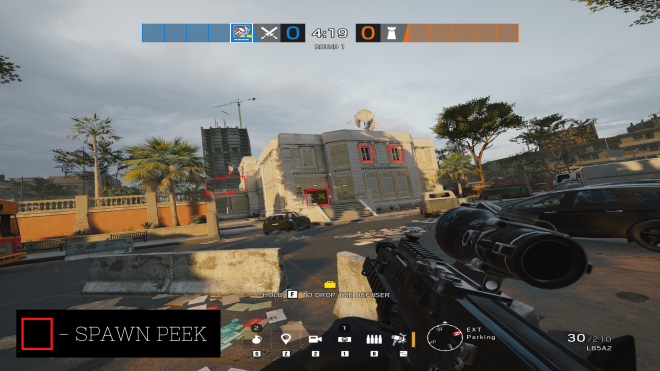 ATTACKING: [BSMNT] CAFETERIA(A) - GARAGE(B) The primary route of attack on this bomb site will be by the attacking team breaching the reinforced wall located on the west of the Garage(B) and planting the diffuser in front of ‘White Van’. However before, breaching the reinforced wall, the attackers will need to gain control over the first floor Press Room and Lobby as these two room are located directly above the basement bombsites and will provide the attacking team with plenty of vertical angles to flush out defending anchors, as well as eliminate a Kaid or Bandit attempting to ‘trick’ the wall. Kali will most likely be needed on this bomb site if the defenders ban Thatcher during the ban phase. The operator's responsibility will consist of assisting the attacking teams hard breacher (Thermite or Hibanna) in breaching the west reinforced Garage(B) wall. After breaching the wall, Kali can be a very influential operator in the round as her sniper rifle is capable of partially destroying soft walls by just shooting them; presenting attackers with the ability to see into the rear Cafeteria(A) bomb site.   SIDE ENTRANCE SPAWN LOCATION 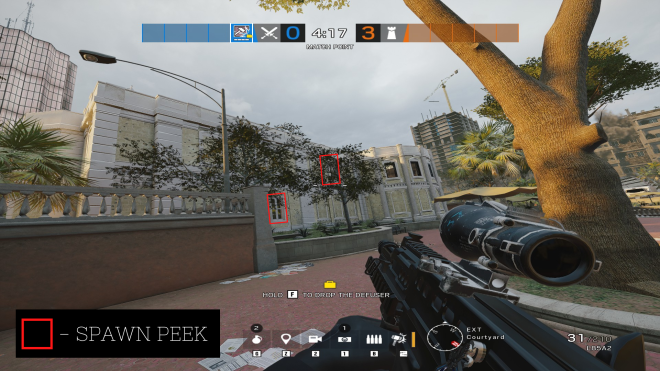 Thank you for reading and I hope this was helpful for you guys. If you are interested in more content or want to ask me questions, you can always find me on my social media accounts TikTok - FTWRK Twitch - footwork6 Instagram - footwork.R6 Thanks!