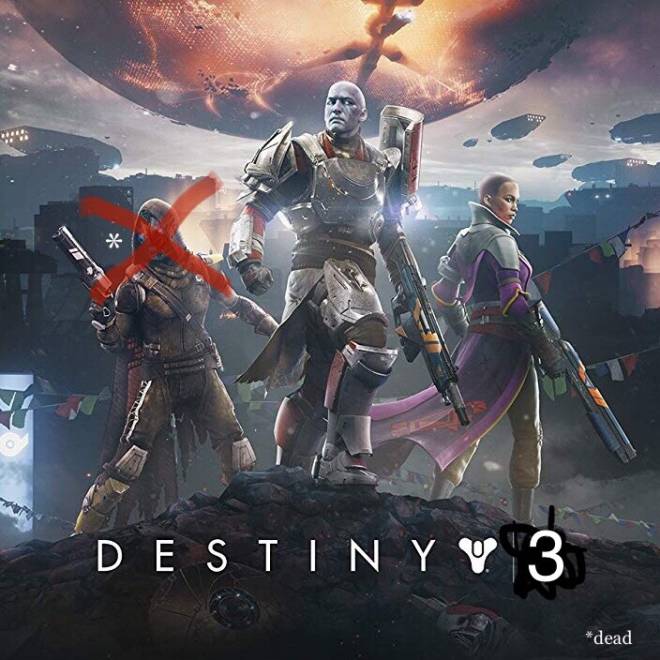 #Let’sTalkDestiny —————————— This is way before its due time, as Destiny 3 is likely at least two years away from us. Leakers have claimed that the next Destiny is already in development, to the surprise of no one, and I’m a bit on the curious side for what is most hoped for or expected by the Moot Guardian community. Potential spoilers ahead I suppose, but we have a long way to go before it would be of much consequence. Another tidbit from the most prominent leaker, Reddit’s AnonTheNine, was that D3 will be much more hardcore-focused, with significant RPG elements. *insert massive hype here*

Of course that could be exaggeration and simply reverting back to a D1 style for the classes, but this could be massive for D3 if it’s real. Granted, this is very early in the development cycle for D3 and could easily change. Add in comments from Bungie devs that seem to be angling for a more MMO approach to game design for our future, and this could mean some very good things.

Up next? A zone focused on PvPvE entirely, and not how Gambit handles things. Supposedly a patrol zone with territory capture while fighting against both competing Guardians and our general enemy varieties.

Then we have a controversial element: Guardians of Darkness. We don’t know where this is going, how it’ll be implemented, or if it will even happen at all, but one of the leaks specifically mentions our Guardians gaining the ability to wield the Darkness itself. Is it permanent? A drastic shift in the story, similar to Alliance VS Horde factions in World of Warcraft?

With all of this as a starting point, what are your thoughts, hopes, and dreams for Destiny 3? Do you want all or even any of these rumors to be true? Let me hear what you want, whether realistic or delusional! ————————————- My general take? I wanted Destiny to be more like an MMO from the beginning, so any elements pushing towards that boundary will make me very happy. Heavy RPG elements will give everyone a chance to customize their Guardians in fantastic new ways, so that’s pretty much the dream for taking Destiny to the next level for me. Darkness Guardians are something I mostly take issue with in terms of lore, but I definitely welcome new supers and subclasses. Unavoidable PvPvE zones would be very potentially frustrating if not implemented correctly, but it could also be a ton of fun. The more that gameplay can expand, regardless of the leaks and rumors, the better. I want D3 to be a merging of new concepts and current elements that can grow, being continually built upon by Bungie. The dream is a game that’s built to change over time, like the differences between the Cosmodrome and the Plaguelands. At very least, Forsaken makes me feel like they finally have a firm grasp on the lore now. ————————————- Did I miss something? Probably. Story leaks are left out intentionally, just because so much can still be up in the air. ¯\_(ツ)_/¯ PS - AnonTheNine was regarded as being very accurate in the leaked information, but has since deleted his account while also denouncing a few copycats claiming to be him. Be careful in hunting for new info.