Destiny 2: Forsaken is only a week away. But today, Bungie released a massive patch to get the game ready for its upcoming expansion. This Forsaken pre-patch includes many of Destiny 2’s various quality of life changes, including the weapon slot changes the studio promised months ago. While no new weapons are dropping yet, players’ old weapons will be moved around, with shotguns, sniper rifles and fusion rifles headed out of the power slot.   This pre-patch adds even more to the game, with buffs to class abilities, exotics and changes to the overall direction. Players can also experience the new Gambit multiplayer mode, which will pit players against both the environment and other enemy guardians, in a free trial that begins on Sept. 1 as part of this patch. Bungie has also announced that some features, like the exotic vault, will be unavailable until Forsaken is released on Sept. 4...   https://www.polygon.com/2018/8/28/17779756/destiny-2-forsaken-pre-patch-10-things-to-know-tldr 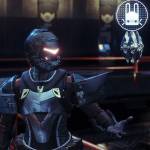 10 things to know about Destiny 2: Forsaken’s pre-patch One of the biggest Destiny patches we’ve ever seen www.polygon.com
SEARCH Destiny POST