Easy to get the Devil’s Ruin Exotic Sidearm Destiny 2 added a new exotic quest for the exotic sidearm Devil’s Ruin. This new exotic quest is part of sidearm and laser, and player should be complete it much easier than previous exotic quests. It is same as other side weapon, but sidearm, which can shoot as rifle, fascinates players to use it.   At first, players need to complete the new seasonal activity “Sundial” in Season of Dawn. Player, who complete the normal Sundial or Legend version, will find the quest for Devil’s Ruin. After that, players move to tower and meet Sint-14 in the hangar to progress next step. The next step called “Parts Long Lost” that players can fulfill the quest with both solo or team mode. Then, players will located on Twilight Gap PvP map, and they have to find 10 destroyed robots. The mission will end when they visit all the 10 robots. The new exotic quest does not require too much effort to players to get new exotic weapon.       (Video guide included) https://gamerant.com/destiny-2-devils-ruin-sidearm-quest-step/ 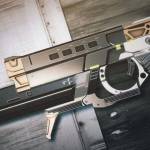 Destiny 2: How to Get the Devil's Ruin Exotic Sidearm Destiny 2's newest quest for the Devil's Ruin exotic sidearm is live, and it is perhaps one of the easiest exotic quests the game has ever seen. gamerant.com
SEARCH Destiny POST